As An Indigenous Woman, I Was Triggered By The MMIWG Report. Here’s What Needs To Happen Now

‘The true power of the inquiry does not lie in the hands of the government. It lies with us—the survivors, families and people who the inquiry is about.’ 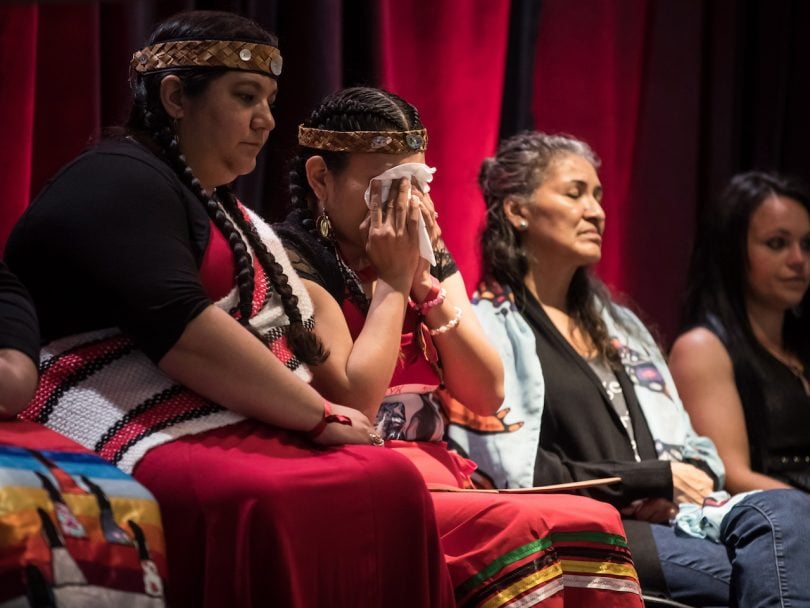 Lorelei Williams, second left, whose cousin Tanya Holyk was murdered by serial killer Robert Pickton and aunt Belinda Williams went missing in 1978, wipes away tears while seated with Rhiannon Bennett, from left to right, Sophie Merasty and Summer Rain Bentham, after responding to the report on the National Inquiry into Missing and Murdered Indigenous Women and Girls, along with other Indigenous women and allies in Vancouver, on Monday June 3, 2019. (Photo, Darryl Dyck/The Canadian Press)

Flashbacks and triggers often happen after traumatic events. And they happened for me during the presentation of the final report of the National Inquiry into Missing and Murdered Indigenous Women and Girls.

In my early 20s, I was in an abusive relationship. One evening, my boyfriend was beating me severely, and as he pinned me against the wall, I desperately tried to come up with a “how will I survive this?” plan. I somehow got away and ran to the bathroom, locking the door behind me. I called the local police detachment on the cellphone I’d just bought the day before—the phone my ex-boyfriend didn’t know I owned.

“My boyfriend is beating me up, I need help.” I cried.

“Does he have a weapon?” The woman asked on the other end of the line. I had called twice previously; they knew my address and my name.

“His weapons are his fists.” I replied.

“Call us back when he has a weapon.”

They hung up. The silence was unbearable; I felt overwhelmingly alone. The people whose job is to serve and protect weren’t able to help me.

I remember telling my mother about the incident, years later. She sobbed and called the police. “You should have helped her!” She yelled into the phone.

“Tell her to file a report and we can look into it.”

My mom hung up, sobbing more, and held me. “I will never let anything like that happen to you again. Call me next time. Not the police.”

In that moment, we both cried as we held each other—as Indigenous women, it was another reminder that colonial systems will never give us the justice we deserve, and that we can only rely on ourselves.

My experience is minimal compared to those of the families involved in the National Inquiry into Missing and Murdered Indigenous Women and Girls, and those of others who decided not to be involved in the inquiry process. However, the fundamentals of how the colonial systems in this country, on stolen lands, often maintain the oppressive, systemic racism and genocidal practices against Indigenous peoples, specifically Indigenous women and 2SLGBTQQIA, is the same.

The final report states that “The National Inquiry’s findings support characterizing these acts, including violence against Indigenous women, girls, and 2SLGBTQQIA people, as genocide.” Genocide. The UN defines it as “acts committed with intent to destroy, in whole or in part, a national, ethnical, racial or religious group.” It’s something Canada has historically denied and continues to deny. Indigenous peoples have reiterated the truth and shown evidence that genocide has and is still taking place, sharing it at the level of the United Nations. Hundreds of recommendations at the UN level have been made. Yet, they are blatantly ignored by the colonial state of Canada.

Here are some more truths: The rapes and murders of Indigenous women that have been taking place ever since colonialism first poisoned the shores of Indigenous people’s homelands are genocidal. They are also a deliberate attack and breach of the historic Treaty relationship between Indigenous peoples and the Crown. The oppressive and toxic dynamics that exists between colonial systems and Indigenous women and 2SLGBTQQIA peoples ignores the peace and co-existence that was originally promised, and bound, within the Treaty relationship.

The strength and resilience of the families involved in the inquiry is something that needs to be acknowledged over and over again. And this is the only reason I am grateful that the inquiry took place. The inquiry itself, to me, is another example of how colonial systems are continuing to create a facade of “making change.” And this brings forward my rage. It is the rage that I have for the generations of women, and 2SLGBTQQIA peoples who deserve so much more. It is the rage that I have for myself, and for my daughter, and for all the Indigenous children who will continue this battle.

The inquiry, in itself, is not exactly what we have envisioned.

There are a lot of inherent weaknesses in the report. For starters, this colonial government can, and will, define, dictate and decide the outcomes of the inquiry. This inquiry is not legally binding and only establishes the facts of the crisis in our communities. It cannot legally state anyone or anything as guilty, and it cannot establish or make the colonial government in power, or others, act a certain way or even follow and/or implement the recommendations created. The choice to implement the recommendations within the final report is ultimately, a political one—and it lies in the hands of the federal government that will be in power after the next election.

The fact that the recommendations made within the inquiry are not legally enforceable, nor legally binding, goes hand in hand with the reconciliation agenda of the government today; a facade with limited space for permanent social change for Indigenous peoples. It can also be seen as the government using the emotional labour of the families involved that will, in the end, maintain colonial supremacy and the continued exploitation of the land and the bodies of Indigenous women and 2SLGBTQQIA peoples.

Yet despite my rage and frustration, there are reasons to be optimistic.

A section that is missing in the report is the suggested actions for Indigenous leaders and Indigenous communities where the positive and preventative change is already taking place. The calls for action could include the creation of spaces for families to heal, collectively and independently, from our traumas. They could look like educating and equipping our children and young people with tools to keep them safe in these times of genocide and oppression. They could look like revitalizing our traditional legal systems, traditional kinship and land-based practices. Without our own role in the dismantling of oppression, genocide, patriarchy, misogyny and colonization, how can we expect change to happen?

The true power of the inquiry does not lie in the hands of the government and what they will do with the recommendations. It lies with us—the survivors, families and people who the inquiry is about. The power is in our daughters and our sons. It is in the acts of resistance: it is in the mothers who will enroll their daughters in self-defence classes and in the Indigenous communities that will continue to establish community-safety programming.

It is in the fact that though I was in an abusive relationship and was raped by that boyfriend after I left him, changed my address and my phone number, I still deliberately speak my truth of what happened. Whenever I can. The power is in the fact that I am teaching my daughter who she is and where she comes from as a Nehiyaw, Anishinaabe, Lakota, Nakoda, person. I will continue to teach her to speak her truth, to speak out against colonialism, genocide and the systems that maintain colonial supremacy.

Ultimately, the power of the inquiry is in us, as Indigenous peoples, to continue to do the decolonial, anti-oppressive and preventative work that has been working for our people for generations.

Watching the final report with my twin sister, tears streaming down our faces, we glanced over at my three-year old daughter. My heart was on fire. And it was clear in that moment that it’s our responsibility to do everything we absolutely can to teach my daughter self-power so that she can create a life of freedom and love. So that she may live a life being fearlessly, and unapologetically, Indigenous.

Andrea Landry teaches at the First Nations University of Canada. She’s a mother, a certified life-skills coach through Red Echo Associates focusing on programs around Indigenous kinship, and a freelance writer for Today’s Parent. She also has a personal blog entitled “Indigenous Motherhood.”