Environment Minister Catherine McKenna faced harsh criticism after linking gender and climate change, but the research shows she might be on to something. 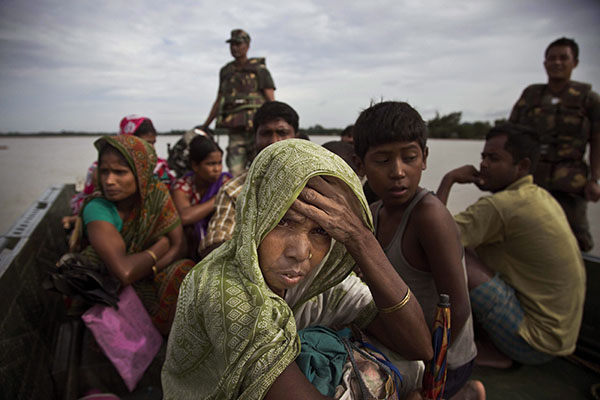 An Indian woman watches from an army boat as she is transported to safer areas from flooding in Jaraguri village in August 2015. Anupam Nath/AP.

While the discussion on the differential impacts of rising temperatures and extreme weather patterns is usually relegated to academics and policy wonks, Environment Minister Catherine McKenna managed to spark an explosive conversation on the subject on Twitter last week.

“Women are more vulnerable to the effects of climate change than men,” she tweeted. Critics jumped on her comments, bemoaning the fact that “now climate change is sexist.”

But is there evidence to back up McKenna’s claim?

Here are three reasons why women may be more impacted by climate change:

1. Women are more likely to be poor

The common consequences of climate change — extreme weather, disease, rising water levels and famines — have the most serious effect on impoverished people because they lack the resources to adapt or recover. In a 25-year survey in India’s Andhya Pradesh, 44 percent of respondents who slid into poverty cited weather events as a cause.

There’s been a lot of debate over whether women actually make up 70 percent of the world’s poor — a commonly cited number — or whether this is just a piece of tenacious misinformation. But researchers at the London School of Economics (LSE) claim that “there is general agreement that poor people on average are more likely to be female,” and concluded that when women are poorer, more women die during natural disasters than men. In developing countries, women comprise 45 to 80 percent of the food-producing workforce, and changes in weather may cause reduced crop yields leading to disastrous impacts on the livelihoods of women who are already in extreme poverty.

2. They face more challenges in the face of natural disasters

As the Earth’s temperature rises, natural disasters like typhoons, floods, and tsunamis are expected to become more common and more deadly. Researchers at the London School of Economics also found that natural disasters tend to kill more women than men, or kill women at a younger age than men — and the stronger the disaster, the greater the disparity.

Cultural factors can lead to women lacking survival skills or being forced into dangerous situations. For example, an Oxfam report on the tsunami that hit Southeast Asia in December 2004 found that in the Aceh Besar district in Indonesia, three times as many men survived than women. The report notes that across the regions hit by the tsunami, men fared better than women in part because men were taught to swim and climb trees. Even if they can swim, women may be expected to wear restrictive clothes like long skirts that can drown them or slow them down while running. The report also notes that women’s role in most societies as caretakers means that they’re responsible for rescuing children and elderly relatives, often sacrificing themselves in the process.

3. They don’t have the same access to resources as men

Studies have shown that while gender-based discrimination is particularly severe in times of crisis, that it is “often not taken into consideration in response planning.” When a natural disaster decimates a country’s health care infrastructure, or government money is redirected towards immediate disaster relief, care for pregnant women may become unavailable, causing a rise in miscarriages as well as maternal and infant mortality. When famines have hit places like Ethiopia and many South Asian countries, women (especially young girls) still have higher mortality rates because food and water are prioritized for men and boys.

While the full extent of climate change’s repercussions is yet to be seen, it’s clear from the existing data that climate change is hitting women hard.