Kim Campbell, Alexandria Ocasio-Cortez, and Elizabeth May don't have time for haters. 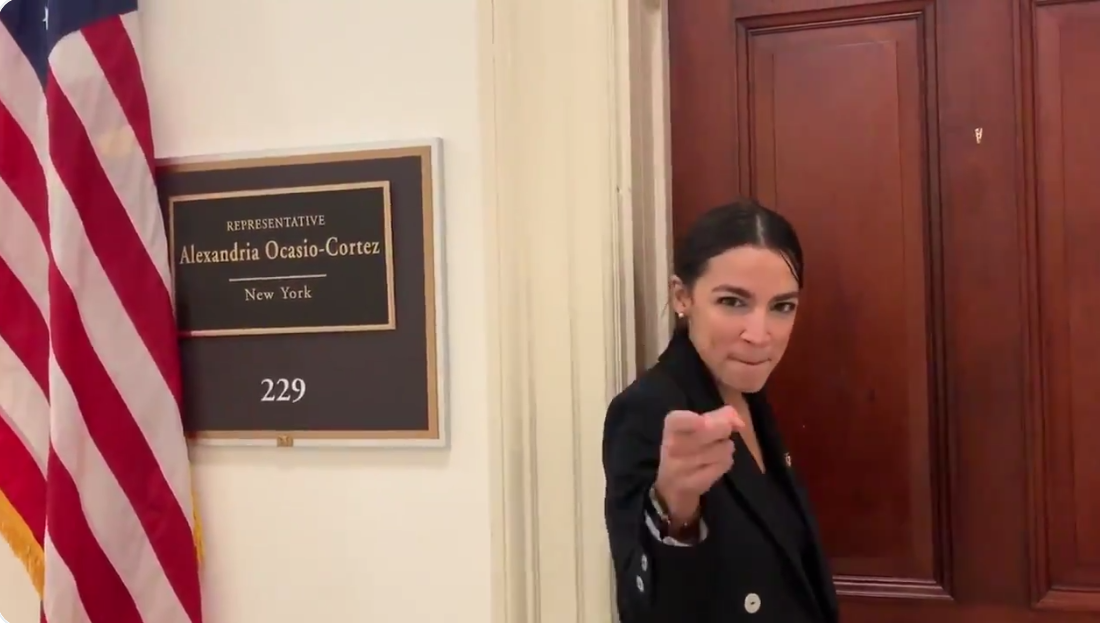 The year has just begun, and women politicians are already under fire for swearing at Trump on Twitter. On January 3, New U.S. House Democrat Rashida Tlaib said in a video, “We’re going to impeach the motherf****r” and former Canadian prime minister Kim Campbell tweeted “He really IS a motherf****r.” Some users responded with anger, telling Campbell, for example, to “Stay classy. You’re a former prime minister.” But, if 2018 was the year of women’s rage, then 2019 is shaping up to be the year that women don’t hold back — starting with calling out incompetent, unfit presidents, swears or no. And if they get heat in response? Sometimes, there’s nothing as satisfying as a good comeback. Beginning with Campbell, here are three woman politicians giving a masterclass in how to respond to social media trolls.

Called “a cheap stripper” in a tweet that has since been deleted — likely in reference to an iconic 1990 portrait in which she stood behind her Queen’s Counsel robes with her shoulders bare — Campbell assured the poster that, “If I WERE a stripper, I would NOT be cheap!”

I assure you if I WERE a stripper, I would NOT be cheap! https://t.co/VM6dIoNfwT

Writer and Toronto Sun columnist Tarek Fatah also tweeted that Campbell “once stripped for the cameras while in office” and that it “proves her gutter origins.” He finished by calling it “disgraceful conduct.” Tired from the nonsense, we’re sure, Campbell saucily answered, “I could sue him for libel but then he would have to ask his mother for a raise in his allowance!”

I could sue him for libel but then he would have to ask his mother for a raise in his allowance! 🙂 https://t.co/vCkr66xmTk

South of the border, the youngest congresswoman in history was caught…dancing during her undergrad?

The “leaked” video was meant to discredit her, but AOC laughed it off, tweeting a video of herself dancing at Congress with the caption, “I hear the GOP thinks women dancing are scandalous. Wait till they find out Congresswomen dance too!”, further delighting fans.

I hear the GOP thinks women dancing are scandalous.

Wait till they find out Congresswomen dance too! 💃🏽

Have a great weekend everyone 🙂 pic.twitter.com/9y6ALOw4F6

On a more serious note, Republican campaign strategist Ed Rollins called Ocasio-Cortez a  “little girl” on the Fox Business Network’s Lou Dobbs Tonight. She clapped back, saying, “GOP loves to insult my intelligence, yet offers *this* as their best + most seasoned opposition to my policy proposals. If anything, this dude is a walking argument to tax misogyny at 100%.”

GOP loves to insult my intelligence, yet offers *this* as their best + most seasoned opposition to my policy proposals.

If anything, this dude is a walking argument to tax misogyny at 100% 😉

Republicans rob everyone the opportunity of real policy debate by resorting to this. https://t.co/Yk3BTHbtxv

Green Party leader Elizabeth May set the tone at the very tail end of 2018, hinting at more to come. Jason Kenney, the leader of the United Conservative Party in Alberta, criticized May for her air travel (airplanes have a notably disproportionate effect on climate change) in a backhanded congratulations for her engagement, no less. May quickly set the facts straight and added, “You know me. I walk the talk.”

Jason, You should have asked me. I was at COP24 for work, took the train for 2 days to get to Italy to see my son and daughter in law who are there on Sabbatical. You know me. I walk the talk. Elizabeth https://t.co/rg5ye5LMrc

Right-wing media personality Ezra Levant also tried to call May a hypocrite because “You and your fiancé have four homes.” May clarified that she in fact, does not own any property and snapped back, “Not the impression you want to create.”

I rent two apartments; One for doing my job in Ottawa. One is my permanent residence in Sidney. I don't own any property. My fiance has a farm and keeps a flat in Vancouver, mostly devoted to the home of his daughter and grandchildren. Not the impression you want to create. https://t.co/nknAzxiwvT

Listen to Stacy Lee Kong talk about Alexandria Ocasio-Cortez and the new politics of authenticity.