What matters, even after #MeToo, is what you can get away with. 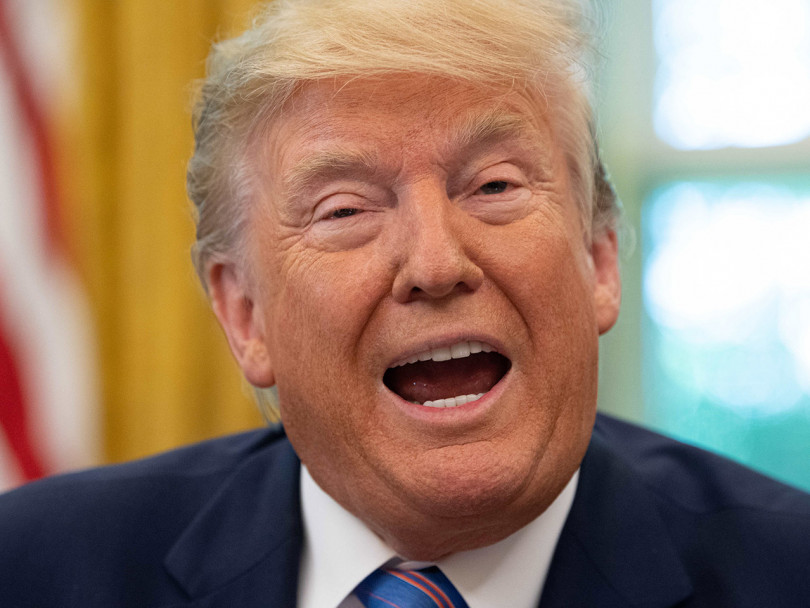 It’s no longer novel to point out how much has changed in America since Donald Trump was elected, and it hasn’t been for some time. But it remains important. We find ourselves at a time when the president of the United States has now been accused of a sexual assault by a total of 22 women. And a recent allegation—of a 1990s rape—is the most serious yet.

Note the need—and it’s not just my own—to italicize the number of women who’ve said Trump groped, fondled, kissed or, now, forced his penis inside them. The slanted letters say Pay attention! Twenty-two is very many! There is an added force when we take them as a whole!

But is there? Not according to how major American media outlets initially treated the story of E. Jean Carroll. In an excerpt from her forthcoming book, Carroll, a veteran journalist and advice columnist for Elle magazine, describes a series of alleged sexual assaults by a series of men—a camp counsellor, a date in university, a boss and Les Moonves, the former CEO of CBS—including one day in the 1990s in the luxury New York department store Bergdorf Goodman. That was, she says, when Trump forced her against the wall of a changing room and penetrated her as she tried to fend him off. She writes that she was a “coward” who didn’t want to face the same blowback experienced by other women who’ve accused Trump of sexual assault. She also explained that she’s telling her story now because she felt she couldn’t counsel women through her column to talk about their experiences with sexual assault while keeping her own hidden.

I read the piece without pause, to its last devastating sentence. The next day, the only major U.S. newspaper to put the story on its front page was the Washington Post. Sunday morning talk shows largely passed it over.

In Trump’s first statement on the subject, he said he’s “never met” Carroll (the article contained a photo of the two of them at a party), claimed Carroll was lying “to sell a new book,” asked for “any information the Democratic Party is working with Ms. Carrolll or New York Magazine (sic)” and—this is particularly bold for a man accused by 22 separate women, on the record—warned that “false allegations diminish the severity of real assault.”

She’s not my type.

Late night hosts ripped Trump for that “great respect” bit followed by the thinnest possible defense by insinuating that there might be other women out there actually worth trying to rape. But Trump has used women’s looks to undermine their accusations against him before. “Look at her,” he said of Natasha Stoynoff (a former writer for People magazine, who accused Trump of forcing her against a wall and kissing her). “She wouldn’t be my first choice,” he said of Jessica Leeds (a businesswoman who said Trump grabbed her breasts and tried to put his hand up her skirt when they sat next to one another on an airplane).

The president knows that by making a rape accusation an issue of a woman’s beauty, he’s simply carrying on the strongman misogyny entwined in his campaign. Trump is obsessed with women’s physical appearances. He’s called women “horseface,” “fat,” “ugly,” “dog,” with “the face of a pig” and mocked women’s plastic surgery; on the flipside, he’s gushed about his own daughter’s looks. He uses his opinion of women to raise his own stature: his critics are ugly, and thus they’re beneath him; his fans are beautiful, and thus lift him up.

Trump understands that sexual assault is about power over others—not just the ability to “grab them by the pussy,” but to get away with it. And not even just to get away with it, but to stride on without so much as a minor tear in your oversized suit. Trump isn’t untouchable on the matter of sexual violence because most Americans think he’s innocent: he’s untouchable because he has the loyalty of the Republican Party and his base, who in their apparent disinterest in these accusations are agreeing with the president that what’s most important in regard to a sexual assault allegation isn’t whether it may have happened, it’s whether you let it take you down (see also: Jian Ghomeshi’s effort to make a comeback; and Republican Roy Moore, the accused peodophile, who’s yet again running for the Senate). Prominent Republicans have told reporters that Trump’s denial was good enough for them.

She’s not my type. Say no more.

All this, of course, is happening after #MeToo, and it seems to me that, given the reaction to Carroll’s story, we have passed beyond the movement without noticing. If it’s not behind us, it’s certainly no longer ascendant.

According to the New York Times, #MeToo had cost more than 200 powerful men their jobs by last fall. Last week, the paper’s initial treatment of Carroll’s story was so emaciated its executive editor later gave an interview admitting it had been “overly cautious” with the report. The Times has since done a 180-degree turn, running interviews with the two friends who corroborated Carroll’s story. But the nation as a whole isn’t following suit.

Journalists and media observers have been spending recent days wondering why Carroll’s accusation hasn’t caused so much as a shrug. It went notably unmentioned in the 2020 Democratic Primary debates. While candidate Sen. Kirsten Gillibrand has tweeted she believes Carroll, House Leader Nancy Pelosi has suggested there isn’t a clear role for Congress to play in investigating the claim.

The general consensus seems to be that, one, we’re all desensitized to these stories; two, we’ve heard so many before, we know what we believe Trump is capable of (including lying, such a regular occurrence for this president that he spawned a fact-checking cottage industry that notably includes Canadian-in-Washington Daniel Dale); and three, there are far bigger fish to fry (the trade war with China, Russian election interference, children in cages at the U.S. border and dying in U.S. custody).

Carroll already knew what the reaction would be.

“I have no expectations” that the story will make a difference, she told the Times, and so far, there’s no sign she was wrong. She explained that she thinks Trump’s sexual assault stories read less like crimes than conquests to his base. Back in 2016, she even thought her allegation could actually help him win the election. “It is a masculine, powerful, leader-like thing to do, to take what you want. To have as many women for your own pleasure as you can take.”

For her part, Carroll will take the backlash that comes from speaking out against Trump (remember the security risks that upended Christine Blasey Ford’s life after she accused now-Supreme Court Justice Brett Kavanaugh of sexual assault, another man who rose successfully above a woman’s voice post-#MeToo). She’s been outspoken about her right to define what happened to her not as rape, but as something she fought back against. “My word is fight,” she said.

In that moment, she writes: “I try to stomp his foot. I try to push him off with my one free hand…and I finally get a knee up high enough to push him out and off and I turn, open the door, and run out of the dressing room.”

She’s not my type.

Carroll’s story is not the type to be taken credibly by Republican leaders. It appears, in this moment, not to be the type to register with voters. New York magazine writer Olivia Nuzzi suggests Trump’s treatment of women might rise in importance if “there’s a recession. Or a war with Iran”—meaning that many people will be happy to ignore the accusation so long as they feel the country is doing okay.

That doesn’t mean it’s airless. Only that despite the hundreds of men toppled like dominos by #MeToo (Harvey Weinstein, Kevin Spacey, Louis C.K., Charlie Rose), Trump represents something else altogether: A single, penultimate home for misogynistic views of sexual assault to continue to fester.