Decked in all blue, they took to the screen to clap for health care workers. 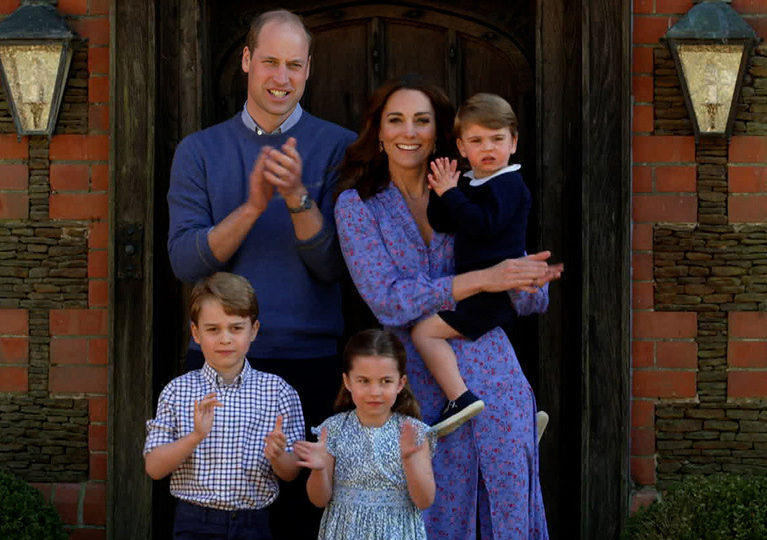 The Cambridge family made a very special appearance on BBC One’s The Big Night In special on April 23 to show their appreciation for health care workers during the coronavirus pandemic. Prince William also got try his hand at comedy!

The surprise sketch began with beloved actor and comedian Stephen Fry sitting down at his desk as Lord Melchett from the iconic Blackadder series. As he turned on his computer, William joined him on Zoom!

The father of three caught up with Stephen, with the former QI host inquiring about how home-schooling Prince George and Princess Charlotte was going.

“It’s a bit of a nightmare, really,” William confessed.

When Stephen asked what was on the curriculum, the duke mentioned spelling, history and French. The 62-year-old replied in (impressive) French, throwing a full sentence back at the future King, which translated as, “I hope I have a smattering of the colloquial and the classical.”

“I literally have no idea what you’re talking about,” William dryly responded. 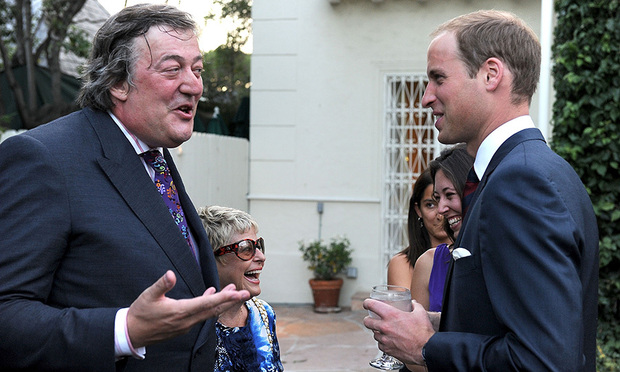 William seemed very amused by Stephen when the two saw each other in Los Angeles in 2011. (Photo: © Frazer Harrison/Getty Images for British Consul-General-Los Angeles)

Stephen then gave him a 60-second warning. At this point, viewers probably started wondering: 60 seconds from what? It seemed like some kind of group activity, based on William’s response. The duke then asked Stephen for TV recommendations, but wasn’t too keen on Tiger King.

“I tend to avoid most shows about royalty,” he quipped.

At the end of their call, we finally found out why William was given a 60-second warning! Following a shot of Stephen clapping for carers outside his own home, the door to Anmer Hall opened, and out came the Cambridges.

George and Charlotte clapped enthusiastically, along with their dad and mom, Kate, who was holding birthday boy Prince Louis in her arms. He got in a good clap, too!

Watch this lovely moment as the Cambridges all wearing blue, #clapforourcarers on the BBC’s Big Night In 👏🏻 pic.twitter.com/F94SaPPb2x

Up in Scotland, Prince Charles and Duchess Camilla also took some time out of their day to clap for health care heroes, too. The Prince of Wales recovered from COVID-19 last month and knows first-hand the importance of quality health care during this time period.

👏👏👏 #ClapForOurCarers The Duke and Duchess of Rothesay have joined the nation once again to show their continued appreciation and support for all the NHS staff and other key workers on the frontline of the battle against coronavirus. Thank you! 💙

This isn’t the first time the Cambridges have surprised with a clapping video for health care workers during the coronavirus pandemic. In late March, George, Charlotte and Louis starred in a sweet video that saw them all clapping outside Anmer Hall, again all wearing blue.

To all the doctors, nurses, carers, GPs, pharmacists, volunteers and other NHS staff working tirelessly to help those affected by #COVID19: thank you. #ClapForOurCarers #ClapForCarers #ThankYouNHS #ClapForNHS

The Big Night In was intended to raise money for Comic Relief and Children in Need. The funds will be used to support UK charities that are working to provide emergency support during the coronavirus pandemic.

As of this writing, the Johns Hopkins University of Medicine says there have been nearly 2.7 million cases of COVID-19 in 185 countries and regions. Nearly 140,000 of those have been in the United Kingdom. The illness has caused more than 187,000 deaths worldwide, while nearly 733,000 people have recovered from it.