It’s Frickin’ Cold Out. The Link Between Extreme Weather And Climate Change

A quick guide to why the experts are saying this latest deep freeze isn't a reason to think we're safe from global warming. 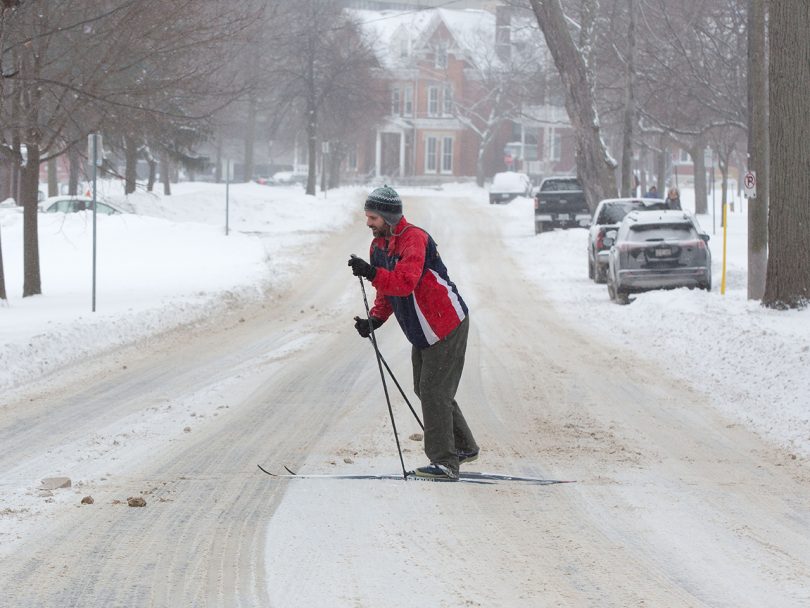 This week’s record-breaking cold temperatures across Canada and the U.S. Midwest have most of us cranking up the heat and wishing we could hibernate. The extreme cold is also sparking calls to step up the fight against manmade climate change from the likes of David Suzuki.

So what does the cold have to do with a warming climate? And how to respond to climate change deniers like Donald Trump, who tweeted this:

In the beautiful Midwest, windchill temperatures are reaching minus 60 degrees, the coldest ever recorded. In coming days, expected to get even colder. People can’t last outside even for minutes. What the hell is going on with Global Waming? Please come back fast, we need you!

Below, more on the recent cold snap and how climate change increases the risk of extreme weather — both hot and cold.

First of all, there’s a difference between weather and climate. The analogy several climate scientists use is that while “weather is like your mood, climate is like your personality.” Weather describes atmospheric conditions at a specific time and place. Climate refers to long-term patterns of weather in a certain area. Another way of looking at it: “climate is what you expect and weather is what you get.” When climatologists talk about global warming, they mean upticks in average surface temperatures worldwide. So while most of North America is enduring more cold than usual, the planet is still getting hotter:

It is dangerously cold in central and eastern US. Yet the planet overall is still 0.3°C warmer than "normal" – and that "normal" is ~0.6°C warmer than pre-industrial times. pic.twitter.com/HCOD7aTuCL

So what’s happening? Are we going to see this extreme weather all the time now?

Climate change research consistently demonstrates rising global temperatures. The last four years are the warmest in recorded history. Climatologists link this warming to increases in carbon dioxide emissions caused by human activity. The effects of climate change can be unpredictable because the planet’s atmosphere is delicately balanced and interconnected. For example, a temperature increase in one part of the world can, paradoxically, lead to more snowstorms elsewhere:

Climate change is creating extreme conditions on both ends of the spectrum. We’re in the midst of a cold snap, but on the other end of the planet, more than 50 wildfires were raging in Tasmania, Australia’s tiniest state. Australia has had eight of its ten hottest summers since 2005. 2018 was the warmest year on record for the Earth’s oceans. These conditions are also contributing to more natural disasters. The 2018 hurricane season in the Pacific and Atlantic Oceans was the most active ever recorded.

Complicating things further is the phenomenon known as the polar vortex.

What is a polar vortex?

Rings of wind in the Earth’s stratosphere surround both poles and trap their cold air. But the rings sometimes split apart, allowing the cold to escape – which is what happened this January:

Here is my "official" 3D animation of this year's stratospheric #PolarVortex split. Another beautiful event! pic.twitter.com/ml59N1cDoh

Polar vortexes have always been around but their breakdowns in the northern hemisphere — which send cold south — are getting more frequent. Scientists don’t yet share a consensus as to why; some point to climate change as the cause. What we do know is that polar vortex breakdowns are contributing to shorter and more intense winters.

Cities in the U.S. Midwest are taking the brunt of the polar vortex schism this week, with Chicago recording temperatures lower than Antarctica on Wednesday. Chicagoans took a brief break from their misery to indulge in a hallowed extreme cold ritual:

Took a break from science-ing indoors to casually throw boiling water off my deck, as you do #Chiberia #PolarVortex2019 pic.twitter.com/MEm6fxhxxs

Throwing a cup of boiling water in the air, when it’s minus 27 degrees (celsius). #chicago #PolarVortex2019 pic.twitter.com/fgRZHnwVvo

People across North America – from Winnipeg to Pennsylvania – are joining in:

When life gives you #polarvortex temps, you make ice vapor. @gige_art is making the most out of the -38° weather today. #lovecbcmb #cbcmanitoba #polarvortex2019

How extreme weather is affecting Canada

With Environment Canada issuing dozens of extreme weather warnings coast to coast, it’s easy to forget all the heat records shattered in 2018. B.C. suffered its worst-ever fire season last year; Montreal had its warmest July in almost a century, resulting in at least 53 heat-related deaths. Halifax experienced two straight weeks with highs of up to 25 degrees Celsius during its summer heat wave, surpassing a record that stood since 1876. The big picture isn’t any better. Nationwide, the insured losses of natural catastrophic events like the 2016 Fort McMurray wildfire have ballooned from an average of $405 million in 1983-2008 to $1.8 billion today. This cold snap will pass, but Canada still faces warming at around twice the global rate, a sobering reminder that the time for action is now.