Inside pro tennis's disturbing battle of the sexes

This article was originally published by Sportsnet.

Crazy but true: The Battle of the Sexes between Billy Jean King and Bobby Riggs took place over 40 years ago. Virtually all of the women currently playing professional tennis today were not even alive.

Yet what now-former BNP Paribas Open Tournament Director and CEO Raymond Moore said at his Sunday morning breakfast address seems in lockstep with something Riggs would have said back in 1973 to hype their matches to draw a national TV audience and give Howard Cosell more fodder for discussion.

As a refresher, Moore told reporters, “In my next life when I come back I want to be someone in the WTA because they ride on the coattails of the men. They don’t make any decisions and they are lucky. They are very, very lucky.”

Moore went on to further make a mess of things by saying, “If I was a lady player, I’d go down every night on my knees and thank God that Roger Federer and Rafa Nadal were born, because they have carried this sport.”

When given the chance to clarify and backtrack he doubled down, discussing the success of female players thanks to being both “competitively and physically attractive.”

Moore’s comments were quickly and widely condemned, and he chose to resign Monday night. However, the real issue won’t disappear along with him. Others involved with the ATP have expressed similar things.

Ukrainian pro Sergiy Stakhovsky not only applauded Moore’s comments, but he has a history of criticizing the WTA and making homophobic remarks about its players. 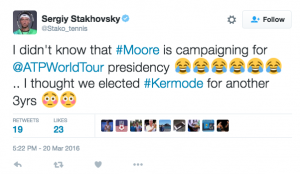 Even Novak Djokovic, who intended well, showed his bias against his female counterparts on tour when trying to denounce Moore’s remarks. After saying he applauds the WTA for their work in achieving equal pay and getting what they deserve, the world No. 1 went on to say, “On the other hand I think that our men’s tennis world, ATP world, should fight for more because the stats are showing that we have much more spectators on the men’s tennis matches. I think that’s one of the reasons why maybe we should get awarded more. Women should fight for what they think they deserve and we should fight for what we think we deserve.”

Related: Of course Serena Williams is Sportsperson of the Year

So women should be applauded for striving to earn as much men, but ultimately they don’t deserve it?

Djokovic went on to further put his foot in his mouth by saying, “As long as it’s like that and there is data and stats available upon who attracts more attention, spectators, who sells more tickets and stuff like that, in relation to that it has to be fairly distributed.”

So I suppose Djokovic can claim this is less about sex and more about results? That regardless of sex the biggest draws should garner fiscal gain at the same level of their notoriety?

The irony is the women’s final at Indian Wells between Williams and Azarenka was a far better show than the men’s. Which is not a surprise. The dominance that Williams has had over the sport has not hurt the women’s game—it has invigorated it. The quest for Serena Slams has been more compelling than even the best of what the men’s side has to offer.

You only have to look as far as last year’s U.S. Open, when the women’s final sold out before the men’s for the first time–and that was thanks at least in part to Williams, who was chasing a calendar-year grand slam.

Williams routinely draws higher television ratings than Djokovic. She has almost a million more followers on Twitter than Djokovic as well hundreds of thousands more on Instagram and has won twice as many Grand Slam titles. Yet Djokovic has earned $20 million more in prize money than Williams. If the system is merit-based, should she not be the breadwinner in that relationship?

The phenomenon is not new. The Williams sisters were drawing record viewership before the Federer-Nadal rivalry emerged. The U.S. Open match between the sisters in 2001 was the first time a Grand Slam women’s final aired in prime time. Despite some skepticism the result was a whopping 22.7 million viewers.

Of course, I don’t mean to harp on Djokovic. I want to give him the benefit of the doubt and assume he means well. His first coach was a woman. He did say he appreciates the sacrifices female athletes make that men have the luxury to not face to the same degree.

“I have great admiration and respect for them to be able to fight on such a high level,” he said. “Many of them have to sacrifice for certain periods of time, the family time or decisions that they make on their own bodies in order to play tennis and play professional sport.”

Williams made her voice heard on the subject.

Related: Is this Sports Illustrated swimsuit cover a victory for women?

Williams not only opens up the game to unique audiences—she wields influence. Drake, Donald Trump, Anna Wintour, Kanye West and multiple members of the Kardashian clan have all watched Serena play in the last year. The women’s side of the tour—in part thanks to Williams—opens tennis up to mainstream exposure in a way the men’s side hasn’t.

Maybe Williams needs to use her power not just on the court but off it, something she’s done before in conjunction with this very event.

Both Williams sisters have had issues at Indian Wells in the past. In 2001 when Venus pulled out of the tournament with a hamstring injury the crowd booed both the Williams family and Serena during her final match against Kim Clijsters. Venus and her father, Richard Williams, claimed they faced racist insults.

Although not speaking openly about a boycott, the sisters had never gone back to Indian Wells until this year. Secondary market tickets for Indian Wells jumped up 16 percent after Serena announced her return.

Imagine the response from tournament organizers and broadcast partners if Serena Williams decided to boycott majors until changes were made to further the WTA. That would be a clear example of just how much the top female player in the world contributes to the growth of the game. Then who would be on their knees?