The Canadian squad is really good—and everything else you need to know. 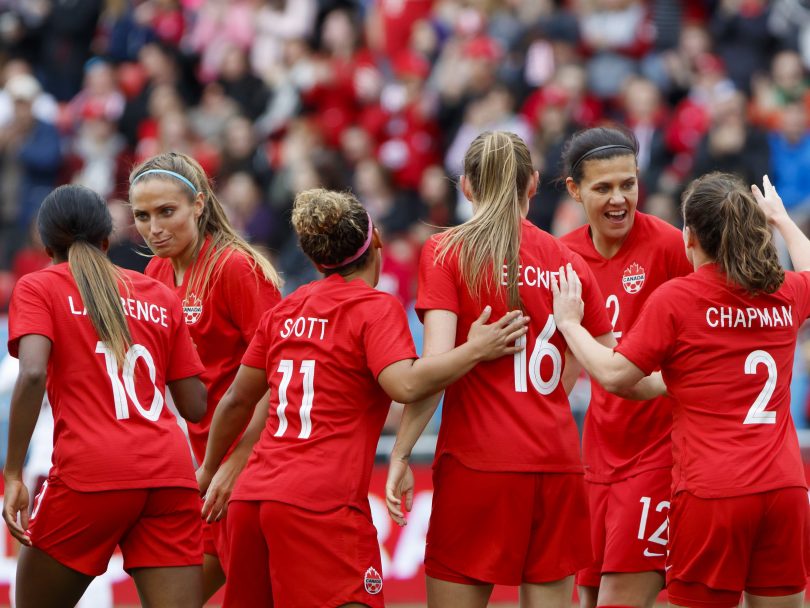 Soccer boots tied and ready. Check. Maple leafs painted on faces. Check. Shiny red national team kits on display. Check. Thousands of girls excited to cheer their heroes. Check! One of Canada’s most formidable teams has taken to the pitch at the 2019 FIFA Women’s World Cup. Here’s everything you need to know about the tournament—and Canada’s team.

What do I need to know about the Women’s World Cup?

The Women’s World Cup, which started on June 7, is the most prestigious and important tournament for women in soccer. It features the top teams in the world and the best players, gives us a glimpse at whose star is rising—and where the women’s game might be heading. The Canadian women have competed at every tournament since 1995. (The first and only time the Canadian men’s side has qualified for their World Cup was in 1986.)

How does the tournament work—and what are Canada’s chances?

The Women’s World Cup is held every four years. Twenty-four teams from all over the world vie for a spot through tournaments in their own regional federation. There are two stages: the group stage and the knockout stage. In the group stage, each of the 24 teams are put into six groups via a draw where they play one match each against their group opponents, tallying three points for a win and one for a draw. Sixteen teams with the most points will advance to the knockout stage. What ensues is an enthralling—and sometimes heartbreaking—round until a champion emerges.

The Canadian women’s team is ranked fifth in the world and has an excellent chance at making it to the podium. While they beat Cameroon 1-0 and New Zealand 2-0, securing their place in the knockout round, on Thursday they lost to 2-1 to the European champion Netherlands, finishing in second place in Group E.

Tell me more about Canada’s team…

The 23-player roster was officially announced May 25 after a pre-tournament friendly against Mexico. The results of that match don’t count towards the World Cup, but Canada won 3-0—and it was the buzz they needed. Nearly 20,000 fans descended on BMO stadium in Toronto to offer our team support and encouragement before they flew to Europe to have a final match against Spain (they tied 0-0).

But they have not had high scoring games and have drawn three of their matches at 0-0, so the team will be looking to put the ball in the back of the net as much as possible. They have overcome difficulties and some bumps along the way—like many women’s national soccer programs—but persevered under the guidance of coach Kenneth Heiner-Moller. Their grit helped the team win a bronze medal at the 2016 Olympics in Rio.

Who is the team’s biggest star?

The team is captained by the greatest Canadian soccer player in history, Christine Sinclair. The B.C. native is the backbone of the National Women’s Soccer League’s Portland Thorns, and one of the most well-respected players in the world because of her talent, intensity and sportsmanship. This is her fifth trip to the World Cup, and Sinclair is on the verge of making soccer history—she is only three goals away from beating American Abby Wambach’s record of most goals scored by an international player.

What other Canadian players should I watch for?

Forward Nichelle Prince adds intensity and speed, along with Janine Beckie who has an very powerful game IQ. They both work seamlessly with Sinclair to create smart and effective plays. Ashley Lawrence is a phenomenal midfielder whose composure and ability to read the plays is exceptional. She plays the ball down the line brilliantly, and supports her teammates where they need her. She plays professionally with Paris-Saint Germain.

Stephanie Labbé is the starting goalkeeper and has earned this spot after taking over from Canadian stalwart Erin McLeod, who did not make the roster due to an injury. Labbé is an advocate for mental health awareness and plays with the reigning NWSL champions North Carolina Courage. One of the greatest strengths of this team are their defensive skills—they will be taking on the world best strikers and that defensive range will be key at the World Cup.

What other teams should I pay attention to?

Some other teams to watch out for are the defending champions the United States—always a tough opponent; England—who have been toiling endlessly since their heartbreaking result at the last World Cup; Japan—a technically sound squad, and of course, France—who have been raising the bar of women’s soccer. New teams at the World Cup this year are Thailand, South Africa, Jamaica, Scotland and Chile.

OK, so how—and when—to I watch?

The Canadians make the short trip to Paris to face No. 9 Sweden in the round of 16 on Monday at 3 p.m. ET.

Matches can be seen on CTV and TSN; most will start between 2 p.m. and 3 p.m. EST to account for the time difference.

The group stages began June 7 with an opener of France versus the Republic of Korea. The group of 16 continues on June 25 and will lead into the quarter finals on June 27, 28 and 29.

The 2015 World Cup in Canada amassed over 750 million viewers around the world. And the final between USA and Japan was the most-watched soccer game in the history of the USA. You want (read: need) to watch this fantastic tournament.

Sounds great! Any other reasons to get excited?

The Women’s World Cup has the opportunity and ability to inspire millions of young girls and women. It showcases some of the best athletic talent in the world. Many of the women’s teams fight against pay inequity, and endure systemic sexism in their federations— including Argentina and Nigeria—but they have made it to France. And they will be fighting on the pitch for continued success.

(It is worth noting that the most-decorated women’s player in the world this year is Ada Hegerberg. The first-ever female winner of the Ballon D’Or—an award given out to the top player—she’s choosing not to attend the World Cup with Norway to protest what she says is the unfair treatment of women’s soccer in her home country.)

This Canadian team has the depth to compete at the World Cup and Olympic levels, and have a truly Canadian characteristics of a solid work ethic, humility and grit. (They also have pure maple syrup, which the team enjoy on pancake breakfasts on match days.)

Some very exciting news today in advance of the #FIFAWWC!

15 Canadian footballers and one member of the staff are joining the Common Goal team! Inspired by Erin McLeod’s commitment earlier this year, this will be the biggest group united in committing to the 1% pledge. pic.twitter.com/FArzZqg7fT

Plus, 15 of the players joined former goalkeeper Erin McLeod’s commitment to Common Goal, a non-profit organization started by Spanish player Juan Mata that uses soccer to help grassroots soccer communities and soccer charities around the world. The Canadian women have pledged 1 percent of their salaries to the initiative. Their donations will be used to help programs that fight gender inequality, provide education, and sustainable solutions to socio-economic issues.