Everything You Need To Know About The Abortion Bans In The U.S. 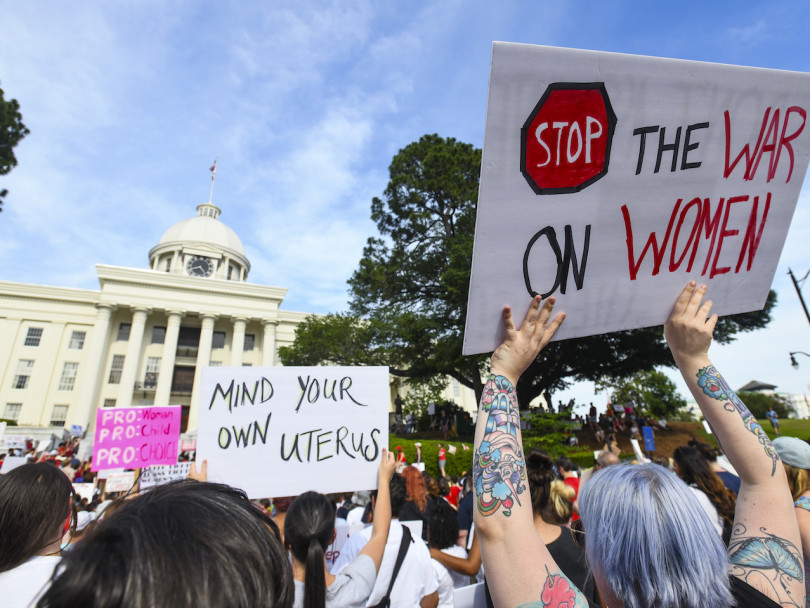 Protestors participate in a rally against one of the nation's most restrictive bans on abortions on May 19, 2019 in Montgomery, Alabama. (Photo by Julie Bennett/Getty Images)

Abortion has been legal in America since the 1973 Roe v. Wade ruling enshrined access to safe, legal abortion as a constitutional right. But for just as long, anti-abortion groups have been trying to undermine the ruling. This year, anti-abortion state politicians have passed the most extreme and sweeping laws in recent memory—including a near-total ban in Alabama. These laws are blatantly unconstitutional, which is exactly the point—the hope is the bans will spark legal challenges and wind up in front of the Supreme Court, where anti-abortion groups think the newly conservative United States Supreme Court—with two Trump appointees—could undermine or overturn Roe v. Wade.

The bills are often—but not exclusively—written and supported by Republican lawmakers in Republican-dominated states, setting up the issue as a major factor in the upcoming 2020 elections. Here’s what you need to know.

What is Alabama’s new abortion law? Is the law a total ban?

Alabama’s near-total ban was signed into law last week, prompting a wave of shock and outrage across liberal U.S. media and sending reproductive rights hashtags trending on Twitter. The law bans all abortion, at any stage of pregnancy, and the only exception is if the pregnancy poses a serious health risk to the woman—no exceptions for rape, incest or fetal viability. It’s the clearest challenge to Roe v. Wade and would see doctors who perform an abortion facing up to 99 years in prison (as one Democratic lawmaker pointed out, that’s 89 more years than someone convicted of rape). The red state’s Republican governor signed the bill on May 15.

What else happened with abortion laws in the U.S.? What about Missouri and Louisiana?

In Missouri, the Republican-controlled legislature passed an abortion ban on May 17, and governor Mike Parson signed it on May 24. The law makes it a felony for anyone to perform an abortion after eight weeks of pregnancy (counted from the first day of a patient’s last normal menstrual period), around the time women would most likely discover they’re pregnant. In essence, then, the law would ban most abortions. The only exception would be if the mother’s life is threatened—which means the law doesn’t carry any exceptions in cases of rape or incest. It also bans abortions for fetuses that might have Down syndrome and contains rules for the notification of the parents or guardians of a minor seeking an abortion.

As in every other state passing bans, the law prompted outrage and protests, including the emotional reading on the Missouri House floor of a letter one Democratic member wrote to her two-year-old daughter. “I came to fight for your rights, Hattie, rights your brother will never have threatened,” Missouri House Representative Keri Ingle said. “Rights to make the most intricate, intimate decisions anyone can make, and that no one should be making on your behalf.”

The Louisiana legislature also passed a “heartbeat” bill on May 29th. By far the most popular extreme legislation of the year among anti-abortion state politicians, the “heartbeat” bills ban abortion after embryonic or fetal cardiac activity can be detected by an ultrasound. That pulsing of a cluster of cells that will eventually become the heart starts at about six weeks of pregnancy (when an embryo is a mere three millimeters long), and often before many women know they’re pregnant, causing pro-choice groups like the Center for Reproductive Rights to charge these laws would effectively ban abortion outright. The only exceptions for Louisiana’s law are the death or serious risk of “impairment of major bodily function” of the pregnant person. Doctors who violate the law could get up to 10 years in prison. While the legislature is controlled by the GOP, the state’s Democratic governor is also anti-abortion, and is expected to sign the bill.

What other states have passed six-week bans?

Kentucky and Mississippi were the first this year—though Mississippi’s ban was struck down by a federal judge on May 24. Kentucky’s law even contained an “emergency” clause which means the law briefly took effect before a federal judge blocked it. Ohio has also passed a six-week ban, and so has Georgia—probably the six-week ban that got the most attention, in part because that state is home to a strong film industry (dubbed “Hollywood of the South”), and some major producers reacted with promises to boycott the state. Georgia’s law does contain exceptions for rape or incest, but only if a police report is filed, and in cases where a woman’s life is at risk or the fetus isn’t viable.

Wait—are all these laws actually in effect?

No, none of them are. And they won’t take effect for at least a few years, if at all, because they either have already been challenged by a lawsuit, or they soon will be. Reproductive rights groups are vowing to challenge all of the extreme bans, as they’ve challenged countless anti-abortion laws every year for decades, and federal judges are expected to block the laws from taking effect (that’s already happened in Kentucky). Louisiana’s law was written with legal battles in mind—it only takes effect if the Fifth Circuit Court of Appeals upholds Mississippi’s ban, which is already being challenged in a lawsuit. The laws are designed instead to challenge Roe v. Wade, the Supreme Court ruling, a fact Alabama lawmakers have made plain. Whether and which bills eventually become law will depend entirely on how the Supreme Court rules on abortion law cases in the future.

How accessible is abortion right now?

That varies according to where you live in the U.S. Many Democratic-controlled states have far better access. In the South and Midwest in particular, abortion clinics have been dwindling in number for years, and six states have only one abortion clinic. A plethora of laws add a myriad of requirements for women and providers, from 24-hour waiting periods to required ultrasounds and state-mandated information that contradicts the best available science. Abortions in anti-choice states are often not covered by state or private health insurance, and can cost between an estimated US$500 and US$1,500.

What about here in Canada—will all this have any impact on us?

Canadians have definitely started to question whether the U.S. anti-abortion war could seep over the border, especially as many of the bans hit headlines around the same time as the March for Life in Ottawa and the arrival in Canada of the most popular figure in the U.S. anti-abortion movement: Abby Johnson.

But the movement remains far more fringe this side of the 49th, and pro-choice politics still dominate in Ottawa (last week, the prime minister said he was “deeply disappointed by the backsliding on women’s rights that we’re seeing in some places around the world, including some American states”). And, while several Conservative MPs attended the anti-abortion rally in Ottawa, Tory leader Andrew Scheer said last week that he’s not planning to reopen the abortion debate. Even so, reproductive justice advocates like Action Canada for Sexual Health & Rights and The Abortion Rights Coalition of Canada have fought for years to increase access to rural and remote communities and expand reproductive health services and education, including to non-binary Canadians. As is the case in the U.S., the fact that abortion is legal doesn’t make it easy, cheap or equal to obtain. And as with other areas of health care, people who are on the margins can have a harder time accessing the health care they need.

What can I do for American women?

Pro-choice groups in the U.S. operate on a number of levels, and they constantly seek support for their work. Planned Parenthood Federation of America, NARAL Pro-Choice and the National Abortion Federation are among the biggest national pro-choice groups lobbying for reproductive rights and providing abortions. Then there’s the National Network of Abortion Funds, the umbrella group of smaller organizations which raise money to directly help low-income women pay for abortions. The Center for Reproductive Rights and the American Civil Liberties Union are the groups regularly filing lawsuits against anti-abortion laws. All of these groups—and countless more—are fundraising to fight the laws and help women access abortions.

With files from Rebecca Gao.