What’s Going On With Canada’s Drought?

Most droughts in Canada have been much smaller. The effects will be felt by nearly everyone in the country. 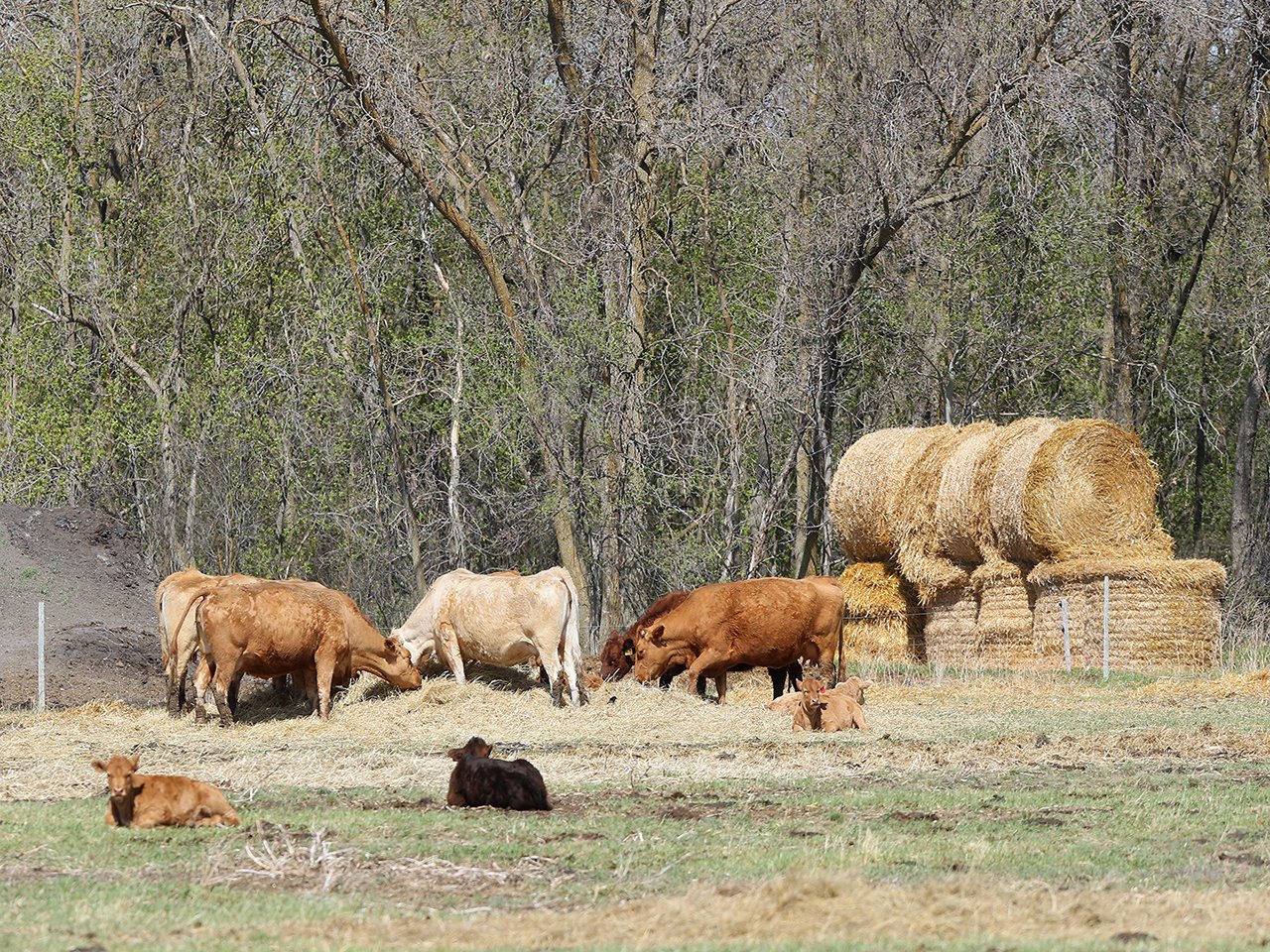 An extreme heat wave affected most of western Canada from late June through most of July, more intense and extended than the region has ever experienced before. If you live in a city, you might have noticed lawns and trees being a little drier. But if you’re a farmer anywhere from northwestern Ontario through the prairies and British Columbia all the way to Vancouver Island, your life has been completely upended by the resulting drought.

When Agriculture Canada did its last drought assessment at the end of July, the drought covered 93 per cent of the agricultural land in western Canada, affecting 45.9 million acres of cropland, 52.6 million acres of pasture and over two million cattle. About three percent of the drought area is considered “extreme” and the hardest hit areas are on the prairies. Most droughts in Canada have been much smaller in size, and the effects of this one will be felt by nearly everyone in the country, eventually.

What is a drought?

Droughts are the result of a lack of moisture from snow and rain. The start of the current drought in the prairies stretches back to last summer and has been compounded by low snowpacks, low precipitation, low amounts of soil moisture and high temperatures ever since. “Dugouts, which hold water for irrigation, were empty, which meant there was very little moisture in the farmland to start the season,” says Erin Gowriluk, executive director of Grain Growers of Canada, which represents 65,000 grain farmers across the country.

Starting off with low moisture in the spring meant that producers were relying on timely rains early in the season. Some farmers received small amounts of rainfall at the right time, while others were not so lucky, ending up with delayed or uneven germination and stunted crop development. The extreme heat across western Canada in June and July hit crops in their most vulnerable period, reducing yields further. Overall, about 80 to 90 percent of the drought-affected region across the prairies are going to have smaller grain crops that are poorer quality, says Gowriluk.

Has the drought contributed to wildfires?

According to Trevor Hadwen, an agroclimate scientist with Agriculture and Agri-food Canada, wildfire is becoming more common and more destructive due in part to droughts. Dry conditions allow fires to start much more easily and quickly, and extremely dry conditions make grass fires more common during the late summer and early fall. British Columbia had an incredible number of serious wildfires this year, hitting cattle producers with a double whammy as they struggled to find grass for their cattle while dodging fires.

Is the drought evidence of climate change?

Droughts are part of the normal climate cycle in western Canada and the western United States, so it’s hard to identify them as climate change, says Hadwen. But the United Nations’ most recent Intergovernmental Panel on Climate Change notes droughts will become more frequent and more severe in the future and Hadwen does say that “the 2021 drought is among the driest one-year droughts on record.” This drought also covers the largest region of Canada in the past 50 or 60 years, says Hadwen. “In recent history, 1961 would be the most comparable to 2021.”

What effect has the drought had on farming?

Cattle, sheep and goat producers have struggled to find water and feed for their animals. Some water sources were not recharged due to a lack of winter snowmelt, and pasture growth to feed animals has not regenerated because of hot and dry conditions. Livestock farmers have had to buy additional feed, or move their animals to find grass, which is difficult when most places throughout the prairies have none.

Many farmers began selling their cattle because they couldn’t find water or feed. This means that Canada could have to import more cattle from the United States, and it threatens related infrastructure, like feedlots and packing plants. These losses could lead some to leave farming entirely, and more loss of grassland and its biodiversity.

“Crop production has been severely impacted, with estimates of 40 to 50 percent reduction from the five-year normal,” says Hadwen, “Crops struggled to find moisture, resulting in thin crops that were extremely stunted.” The result was a “heat dome” over western Canada this summer: Strong, high- pressure atmospheric conditions combined with influences from La Niña created vast areas of sweltering heat that got trapped under a high-pressure dome, hammering crops like wheat and barley. Dry conditions have also led to premature ripening and early harvest.

Grain farmers will not make as much money as they did last year, says Gowriluk. “Margins for Canadian farmers are very tight. There is often significant debt involved to finance the operation,” she says. Farmers must spend a lot of money to plant a crop, hoping they can earn back their investment and support the rural communities they live in. While grain prices have been rising, if a farmer’s harvest is cut in half from last year, they’re not getting further ahead, says Gowriluk.

What are the other complications from drought?

Drought can bring about numerous weeds, insects, diseases and mold. Grasshoppers thrive in dry, hot temperatures, and in some areas of the prairies, they’ve been decimating farmers’ meagre crops.

How long could the drought go on?

“This is a very difficult question to answer,” says Hadwen. “Seasonal forecasts are not clear to let us know when wetter conditions will return.” Winter conditions usually provide some relief, but even with normal fall and winter precipitation, it will take many years for some farms to recover from the drought. Multi-year droughts are not uncommon. In 2001 and 2002, there were droughts in most provinces in Canada, but it affected only portions of the province.

Will food prices go up?

The short answer is yes. Not just Canada, but parts of the United States and Russia are also having droughts, which affects the entire northern hemisphere’s harvest potential, according to Sylvain Charlebois, a professor and senior director of the Food Analytics Lab at Dalhousie University in Halifax. “Prices are higher than usual and that will impact input costs down the food chain, into processing in particular,” he says.

Charlebois has monitored food prices for a decade, along with team members from the University of British Columbia, the University of Guelph, and the University of Saskatchewan. “COVID-19 has really made things complicated when it comes to global supply chains and logistics. It’s costing way more to move things around,” he says. “When grain handlers are buying grain, and shipping it all over the place, it’s costing them way more. Whoever is buying it has to pay more.”

The Winnipeg Free Press recently reported that one in five businesses plan to hike their prices in the next three months. Using Statistics Canada data, they found that the price of round steak increased from $17.97/kg in March 2021 to $19.05/kg in July. The price of flour, cereal and other produce items have also crept up since the spring, and you can expect to see more increases on the shelf.

How is the drought affecting farmers’ mental health?

The farming community is exposed to both chronic and acute stress, says Cynthia Beck, a farmer who also works in rural mental health and is studying clinical psychology at the University of Regina. Chronic stress is sustained, the type of stress that comes from always having a lot to do: For farmers, it happens during harvest, or when cows are calving. Acute stress is sudden, like a car accident. The body is jarred, but it recovers when the incident is finally over.

“The drought has moved people from chronic stress to acute stress,” says Beck. “The stress level has been ramped way up, their nervous system’s response has been ramped up and it’s just staying there. It’s really hard on a person’s physical and mental health, so it’s a double whammy.”

Various provincial governments and the federal government have been working on rural mental health strategies. Domore.ag has a list of current resources.

Is there any financial help for farmers?

Grain farmers can buy into crop insurance, which offers coverage based on a farmer’s average production. If they have it, it will cover some of their costs, but not all. Cattle producers can apply for AgriRecovery, which will provide them with some money for feed, and is funded by both provinces and the federal government.

What can non-farmers do to help?

Gowriluk would like to see people choose to buy Canadian products. They can also recognize that the government has a role to play in supporting Canadian farmers, and be willing to do so as taxpayers —not just short term relief programs, but longer term investment in agricultural research, so new technology like drought-tolerant seeds can be created.

“I think the first thing is to recognize how important farmers are to Canada. They grow the food we eat. They contribute to the rural economies in which they live, and they drive the Canadian economy, in a very significant way,” she says.