What Is The Model Minority Myth?

We delve into the stereotype—and why it needs to be dismantled. 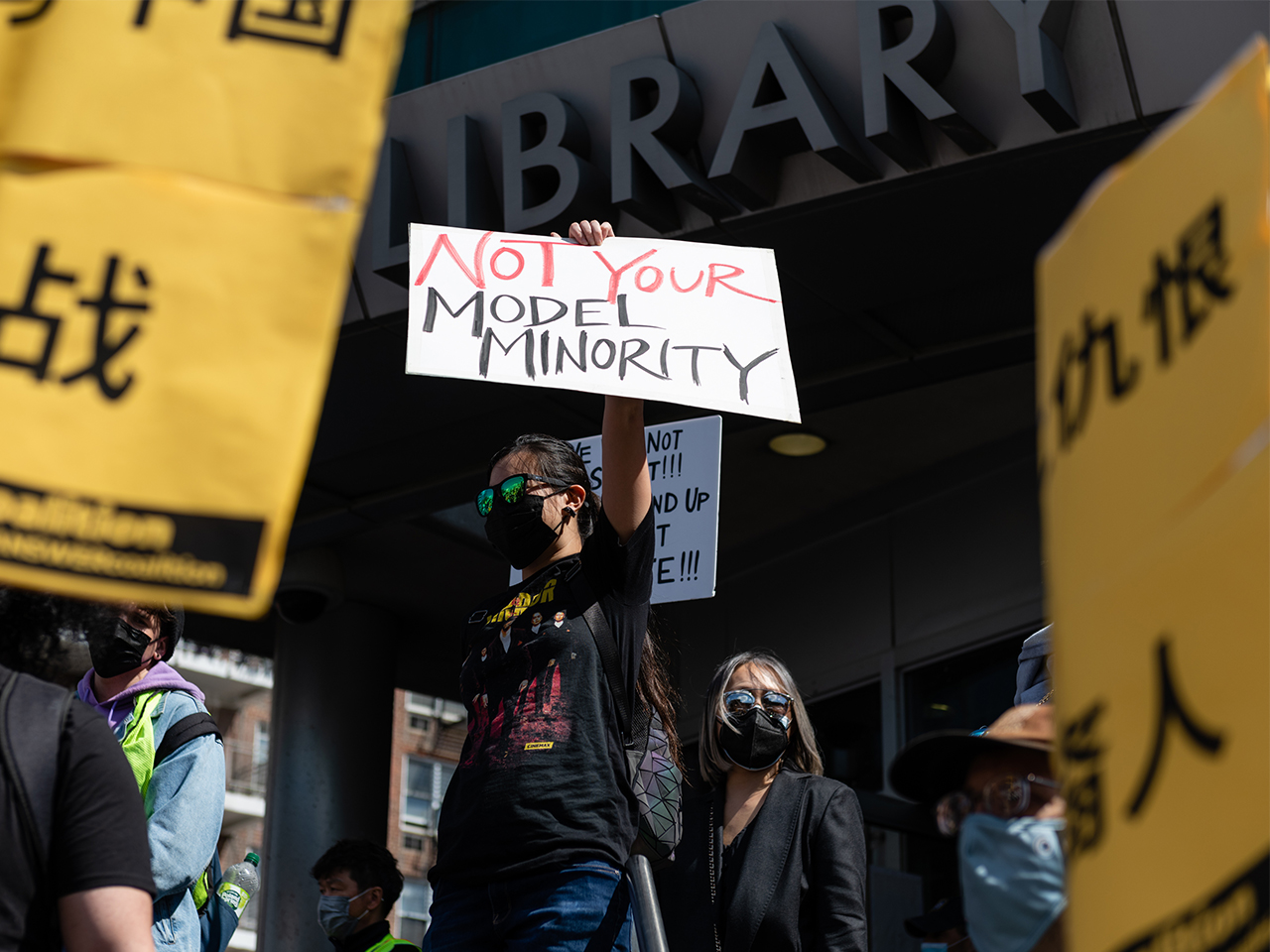 A demonstrator holds a sign that reads “Not Your Model Minority” during a National Day of Action rally in the Flushing neighborhood of the Queens borough of New York, U.S., on Saturday, March 27, 2021. (Photo: Eric Lee/Bloomberg via Getty Images)

“See, we are not the submissive stereotype that’s been depicted,” narrates Tse as footage of protests against anti-Asian racism is shown.

He’s referring to the “model minority” stereotype. It’s a North American concept that has misled people to believe that the Asian community can “overcome” racism, when that’s certainly not the case (in fact, Vancouver was recently named the anti-Asian hate crime capital of North America by Bloomberg). Here’s what you should know about the harmful effects of being labelled as the “model minority.”

What is the “model minority” stereotype?

Just 20 years after the end of Japanese internment camps in the U.S., the term “model minority” was coined. It can be traced back to a 1966 New York Times Magazine article by sociologist William Petersen. In “Success Story, Japanese-American Style,” Petersen claims Japanese Americans were able to overcome racism and achieve success with what he characterized as their strong work ethic, respect for authority, cultural and family values. This myth would eventually be imposed on South, Southeast and East Asian communities in North America.

On the surface, it reads like a compliment. Positive characteristics like “hard working” might be something you put on your resume. But in reality, this overgeneralization of a racialized group is incredibly harmful. “These stereotypes hide the differences within Asian communities,” says Xiaobei Chen, a professor of sociology at Carleton University in Ottawa.

Differences like ethnicity, social, political and economic status are overlooked. Essentially, the term is used to paint Asian communities with a broad brush, labelling them as highly educated and financially successful—and therefore less likely to experience racism.

How does this stereotype paint Asian communities as a monolith?

While movies like Crazy Rich Asians and shows like Bling Empire are wins for Asian representation in TV and film, they also perpetuate the “model minority” by highlighting the lavish lifestyle of a small percentage of the Asian population.

“I think up until recently, the only representation [in pop culture] we had of Asian people were the nerdy math whizzes,” says Karine Ng, one of the organizers of the B.C. chapter of the Asian Canadian Labour Alliance (ACLA), a collective of labour activists advocating for Asian Canadian workers rights. “It really erases the experiences and the very real condition of these working class people, especially women who are toiling away and don’t have that mobility.”

How is the stereotype harmful towards Asian women?

The Atlanta spa shootings in March are a prime example of the stereotype’s harmful effects. A prosecutor in Atlanta says the shootings were hate crimes and that the suspect targeted some of the victims because they were Asian women.

“What [the Atlanta shootings] has done is really revealed the elevated vulnerability of Asian women in the working class,” says Chen. “That’s one example of the reality of how poverty and exploitation in Asian communities do not often get seen and addressed.”

Ng’s work with the B.C. chapter of the ACLA has shown her the role many Asian women make up in the Canadian workforce. “Be it in a hotel or hospital, janitorial work or serving staff; a huge number of mostly Asian females are performing that work, and we all know that they’re not paid very well and the minimum wage is not even a living wage,” she says.

The “model minority” myth essentially erases the experiences of the working class and disregards the systemic racism that continues to affect their quality of life.

Ng adds that while blatantly anti-Asian policies from history like the Chinese Head Tax don’t exist anymore, these policies present themselves in new ways like the Temporary Foreign Workers Program. “There are many Filipino workers, again, mostly women, who come here to do very difficult work and yet they don’t have the status and face so many barriers to gain permanent residency,” she explains.

And, of course, there’s also the lack of rights and protections for massage workers that help create an environment that allows violent incidents like the Atlanta shootings to occur.

How is the model minority myth used to uphold white supremacy?

It’s a tool that has been used to uphold white supremacy by creating a divide between Asian, Black and other racialized communities.

“[The ‘model minority’ stereotype] has a certain promise that we can be white enough,” says Ng.

It was used after World War II to compare the Black community and Japanese community, while completely ignoring the slavery, segregation and policing the Black community has endured. Today, the stereotype continues to distract from the flaws of the system by unfairly comparing and pitting Asian and Black communities against each other, which further perpetuates anti-Black racism.

How is the stereotype being upheld today and how can it be dismantled?

Systemic racism continues to fuel the “model minority” myth. Chen says this includes Asian Canadians and Asian Americans internalizing the myth as well, since it can feel like a positive stereotype.

“There’s a willingness sometimes to buy in, in order to survive, especially for first generation immigrants,” adds Ng. She says this can translate into a cultural upbringing that centres more around obedience and not challenging authority.

Many move to Canada and the U.S. for the promise of a better life, so the pressure to keep your head down and assimilate in the hopes that that will lead to success is very real. But it’s just a cycle that feeds into the stereotype. “This myth has helped continue the narrative that by being silent, we can become white proximate,” says Ng.

We’ve seen how Asian communities are working towards dismantling the “model minority.” Many broke the cycle of silence against anti-Black racism and showed up to Black Lives Matter protests last year. This year, rallies against anti-Asian racism were held across Canada and the U.S. The younger generation of Asian Canadians are also having tough conversations with their elders about anti-Black racism.

While Asian communities do the interpersonal work, Ng says governments need to step up by creating more equitable immigration and labour policies that will protect those erased by the “model minority” myth.