What Is Emotional Labour? 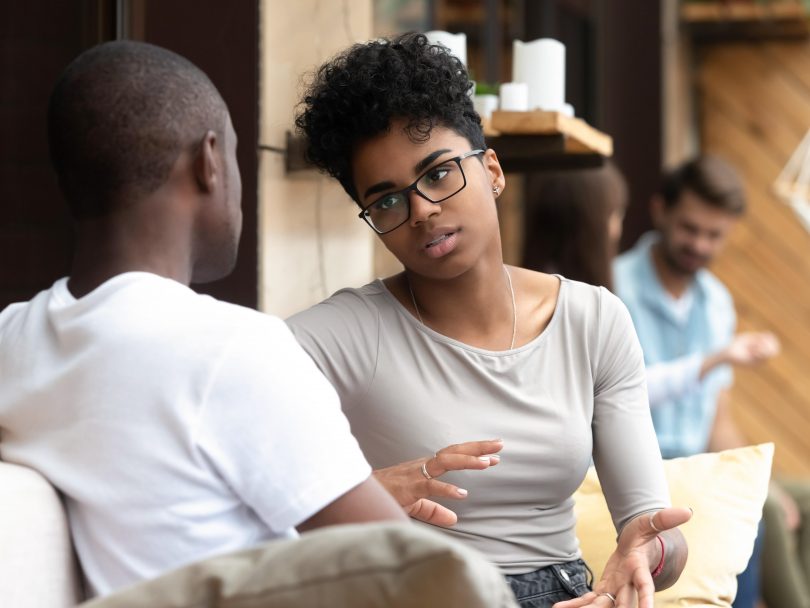 The term “emotional labour” has been thrown around a lot lately. Though it started off as a sociological term, emotional labour entered the cultural zeitgeist after a 2017 Harper’s Bazaar article by Gemma Hartley called out “the unpaid job men still don’t understand.” In accordance with that piece, the term’s popular definition is now mostly focused on the invisible, underappreciated work that goes on in a household.

But… what exactly is emotional labour? Here is everything you need to know: what it is, who does it and how it can affect you.

What is emotional labour?

The term was coined by sociologist Dr. Arlie Hochschild in her 1983 book The Managed Heart, in which Hochschild described emotional labour as having to suppress feelings for the sake of other people’s “proper state of mind.” In particular, Hochschild wrote that emotional labour has to do with managing emotions to fulfill the requirements of a job.

“It involves publicly showing certain emotion displays while hiding other emotions, according to the social expectations or demands of a work role,” says Dr. Melanie Badali, a registered psychologist in North Vancouver. “For example, if you got a job at Disney World, I would expect it would be a part of your job to provide service with a smile regardless of how you are actually feeling.”

Jobs involving emotional labour are defined as jobs that require contact with the public, require the worker to engage emotionally with another person and/or allow the employer to exercise a degree of control over the emotional activities of the worker (for example, if you’re a barista, you might be obliged to continue a conversation with a customer, even if the cafe is super busy or you don’t really want to talk). Some specific professions that have been looked at in the study of emotional labour include flight attendants, daycare workers, public administrators, health professionals, teachers and service industry workers (like hotel staff and restaurant servers).

Emotional labour doesn’t affect everyone equally—it all depends on the individual, the workplace in question and how good the fit is between the two. In fact, if the fit is good, the worker might not even see the emotional labour attached to their job as “work.”

The newer, popular way that “emotional labour” is being used refers to emotional management outside of paid work. Some, including Hochschild herself, have pushed against the new definition of the term, arguing that emotional labour refers solely to paid work and that the use of “emotional labour” when discussing emotional management outside of the workplace makes the term lose its meaning because it’s overapplied. However, others see the term’s new broader meaning to be a simple consequence of what happens when academic talk enters popular culture.

Why is everyone talking about emotional labour now?

A number of viral essays, like Hartley’s Harper’s Bazaar piece, have highlighted the trouble with emotional labour and the invisible role it plays in all our interactions. Pieces like Hartley’s popularized the term and concept of “emotional labour” and made it mainstream feminism’s favourite term. It’s become a way for women to explain their feelings and frustrations—that they’ve been doing unseen and underappreciated work for their whole lives. The term has, for better or for worse, come to be shorthand for any work that women do that is not explicitly valued.

There are two types of emotional labour strategies: surface acting and deep acting.

In surface acting, “people are showing, or trying to show, a different emotion than the ones that they are truly experiencing,” explains Dr. Badali. “In our happy theme park example, a worker who is surface acting may be smiling as they sell cotton candy to customers while inside feeling angry toward their coworker. The emotion does not match the emotion displayed.”

In deep acting, workers try to regulate their feelings—not just their emotional display—by trying to change their thought patterns. Workers in deep acting will try to make their true emotions in line with the emotions expected of them on the job. “In our theme park example, a worker who is deep acting may try to shift their emotions from anger by focusing on their role as someone who can be part of providing a once-in-a-lifetime experience to a family,” says Dr. Badali. “Deep acting appears to have a positive effect on performance without having the same well-being negative consequences as surface acting.”

What about outside of the workplace?

Outside of the workplace, in its more popular usage, emotional labour refers to the work involved in keeping other people comfortable and happy—especially in the domestic sphere. Managing children’s schedules, remembering to send holiday cards to friends and families, planning parties and get-togethers—these all involve emotional labour. An imbalance in the division of emotional labour can lead to resentment between partners, friends or family members.

How does gender play into all of this?

Many of the professions that expect emotional regulation are traditionally jobs held by women—teachers, flight attendants, servers at a restaurant, et cetera. As well, women often feel the need to regulate their emotions in the workplace—they feel like they need to raise their voices to be heard, or conversely, be less assertive and just “play nice.” All of this anticipation of backlash, worrying about what others think and constant anxiety counts as emotional labour, says Hochschild in an interview with The Atlantic.

In heterosexual couples, women are traditionally the ones doing much of the domestic work—all the planning, management, and remembering. Where emotional labour often comes up is tied intimately with stereotypical conceptions of gender and traditional gender roles. Parental nurturing, conflict resolution, active listening—all the emotional work that keeps a couple and/or household happy and comfortable—are all typically expected of women.

Emotional labour is made even more complicated by race and class. Women of colour have to navigate their intersecting identities—race, class, gender—all while performing the same emotional labour that white women perform, explains Hochschild in an interview with the Journal of Consumer Culture.

However, women aren’t the only people who do emotional labour. “Emotional labour for men, it’s just different,” says Dr. Denise Brend, a postdoctoral fellow at the Université de Sherbrooke. “The expectations are different and they do things that might not always be obvious as emotional labour […] different cultures assign different expectations to people viewed as male versus female when it comes to emotional expression, despite human beings mainly sharing the same set of emotions.”

If you think performing emotional labour is having a negative effect on you, what can you do?

If you are doing a lot of emotional labour and experiencing negative consequences, like burnout or exhaustion, then it might be time to change your work situation or how you regulate your emotions. “I would caution, however, against trying to regulate your emotions to be a better fit for the environment if it is an unhealthy or toxic workplace,” says Dr. Badali. “If you have to put on a certain type of ‘face’ for a job on occasion—that’s normal. But if you feel pressure to be someone other than yourself or pretend, not in a fun way, a lot of time, then maybe it’s not a good fit for you.”

In a relationship, it’s important to talk to your partner if you feel as if you’re doing the lion’s share of the emotional labour. Telling your partner how you feel and articulating your needs, rather than springing criticism on them, can often get your partner to recognize their behaviour and course correct without getting into a conflict.

For straight men who want to lighten the load for women, both at work and in their relationships, a good way to do so is to stop thinking “she’s just better at this kind of stuff.” There’s nothing inherent in a woman that makes her better at, say, responding to and resolving domestic disputes. As well, monitoring helpfulness around the house and workplace can help men look for areas where they could do more.

“I think, in a broad sense, we always have a contract going on, whether it’s verbal or unconscious. We negotiate with our friends and our family members what the relationship is going to be like,” says Dr. Brend. It’s all about thinking about “how you can engage in a relationship in a way where you can be loving and supportive to that person, but also keep yourself safe and sustain yourself long term.”