Thanks to the slow food movement, we now know the value and the joys of local, seasonal eating. A similar cultural shift is now taking root in the floral industry—meet four Canadian women leading the way. 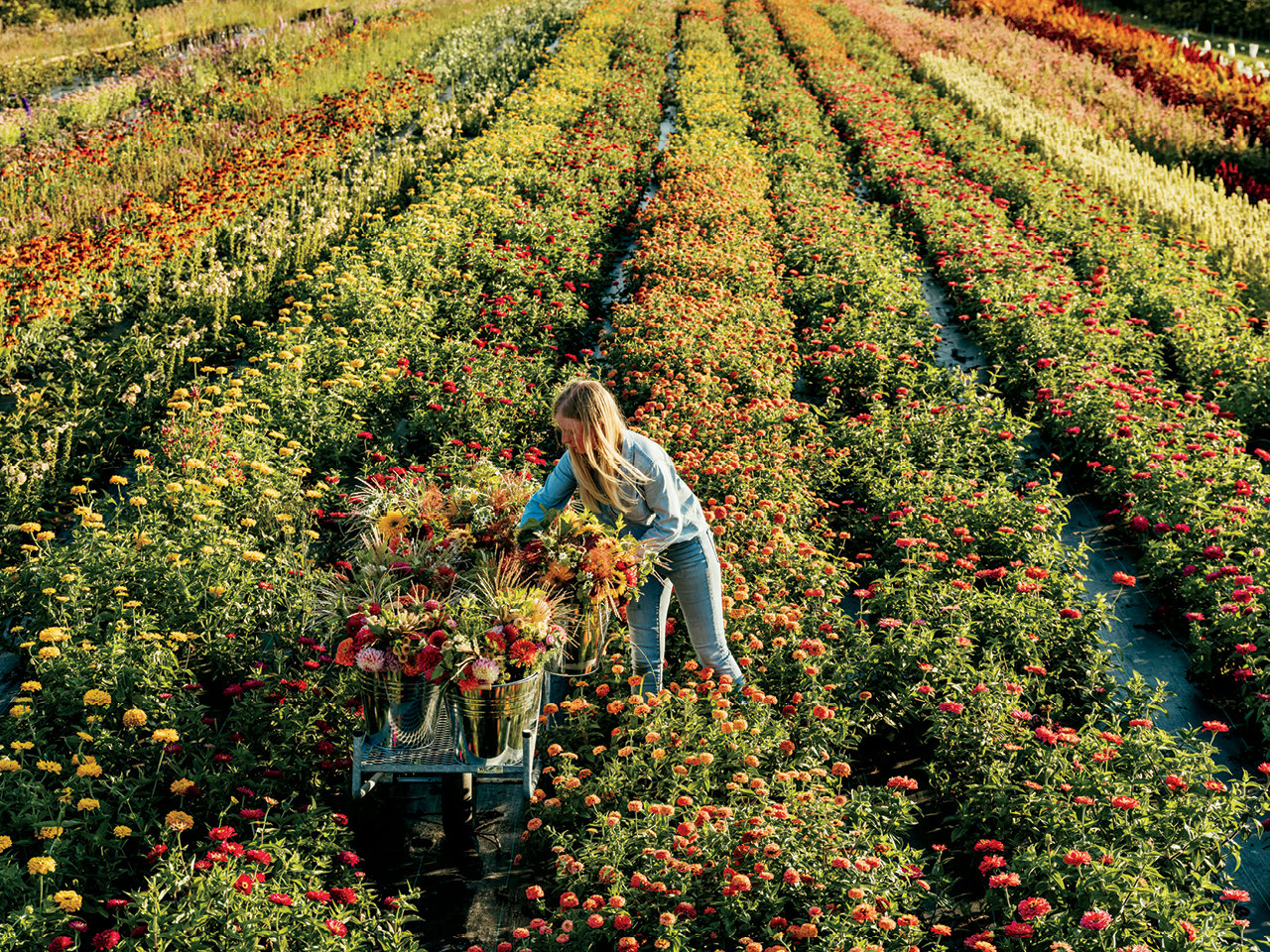 Thanks to the work of the slow food movement over the past two decades, we now know the value and the joys of local, seasonal eating, whether it’s spicy mouthfuls of spring’s first baby greens or the pure orb of sunshine that is a ripe summer peach. A similar cultural shift is now taking root in the floral industry: Slow flowers, as Seattle writer and local-blooms champion Debra Prinzing first dubbed them, operate on the same principles as slow food, celebrating seasonality and locality.

Flowers are big business; they generated $158 million in sales in Canada in 2021. Demand is especially high around Valentine’s Day, when we throw around roses like we’re all on The Bachelor. The overwhelming majority of these blooms are imported from countries like Ecuador and Colombia, where the climate can support year-round cultivation. But these are quite literally delicate flowers that need to be flown in and refrigerated throughout the supply chain. The conventional flower-growing industry is also one of the top consumers of pesticides globally. High chemical use means more dangerous conditions for workers (who are usually women), plus an increased risk of contaminating the local environment. Labour violations, including exploitation and working long hours without overtime wages, are also common. As one worker in Colombia said in an eye-opening 2017 report on the industry, “Today, a flower is not produced with sweetness but with tears. Our product is used to express beautiful feelings throughout the world, but we are treated very poorly.”

There are more than 2,000 flower farms in Canada trying to offer a better alternative. Many operate organically, without pesticides. They are resurrecting age-old varieties and breeding new ones. And these blooms are not only more varied and beautiful, but also often more fragrant, because export growers prioritize durability over scent.

This slow flowers revolution is being led by women—small farmers, florists and specialty seed sellers. We’re sharing four of their stories to showcase their passion and dedication, as well as the rich variety and ephemeral beauty of our homegrown stems. 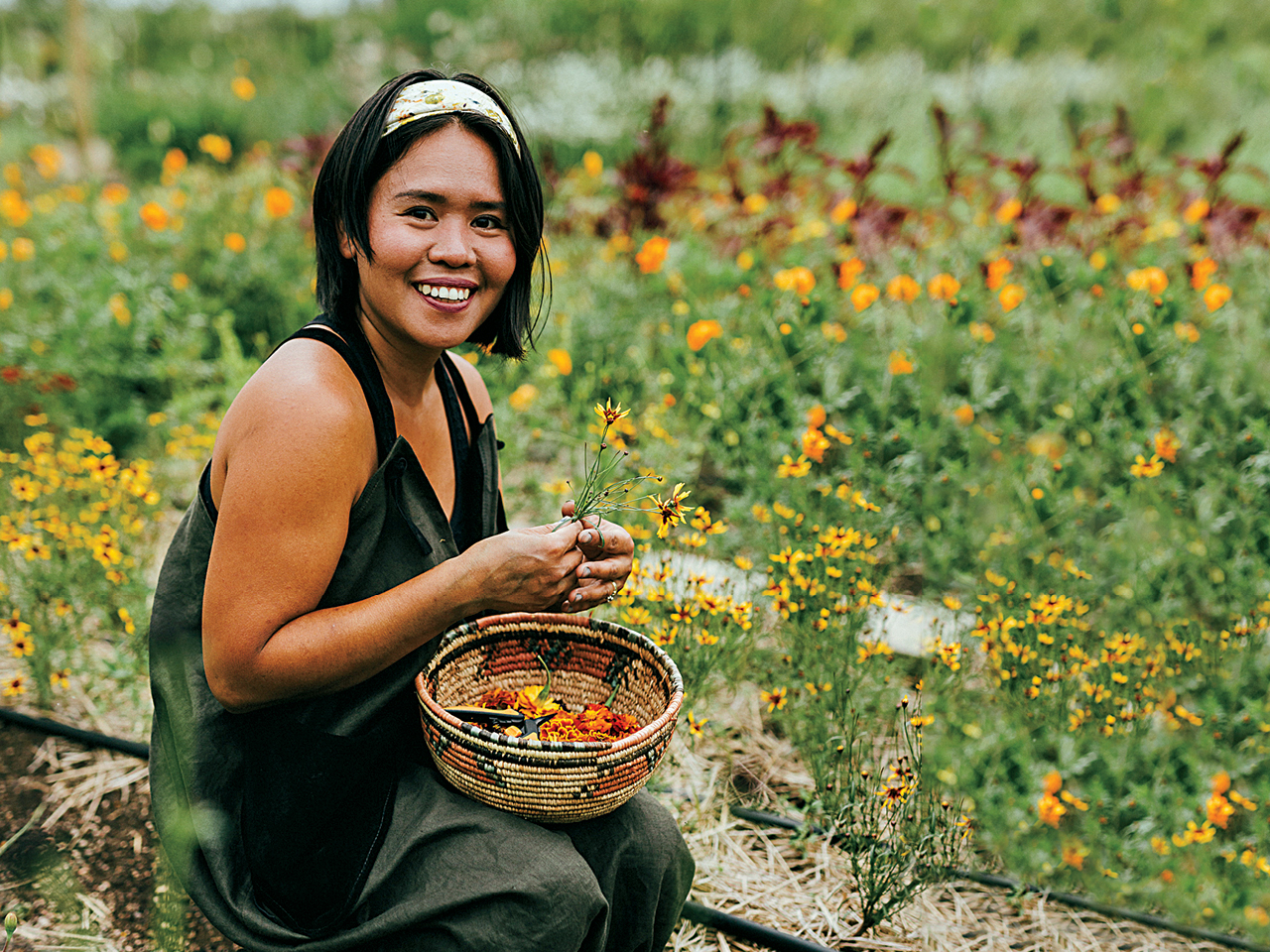 In 2016, Lourdes Still turned a section of her rural southeastern Manitoba yard into a veggie garden. At the time, Still was working as a wholesale flower buyer, importing South American stems. But when she discovered that people were running seasonal farms and growing flowers—everything from roselike lisianthus to coralesque celosia—in Manitoba, where there are fewer than 135 frost-free days a year, she was intrigued. By 2018, she had added a 1,200-square-foot flower garden, which provided a bounty appropriate for her farm’s name, Masagana, which means “abundant, plentiful, rich, prosperous, bountiful” in Tagalog.

With every year, more of Still’s lawn disappeared. She started selling flowers at nearby markets and hosted annual U-picks. Masagana became a kind of prophecy: The abundance threatened to overwhelm. “Our house was full of flowers, but so was our compost,” says Still. Then, in February 2019, a workshop at a local fibre farm and mill opened her eyes to using flowers in natural dyes. And so she started growing plants that could do dye duty, such as marigolds, Japanese indigo and scabiosas—what Still calls “living colours.”

By 2021, her gardens had expanded to 4,800 square feet, and she started Tinta Experience, a botanical dyeing studio and workshop. During the pandemic, as people came to harvest flowers or learn botanical dyeing at her farm, Still was thrilled to share her passion. “I hope I inspire people to find that joy in their life,” she says.“If that’s flowers, great.” 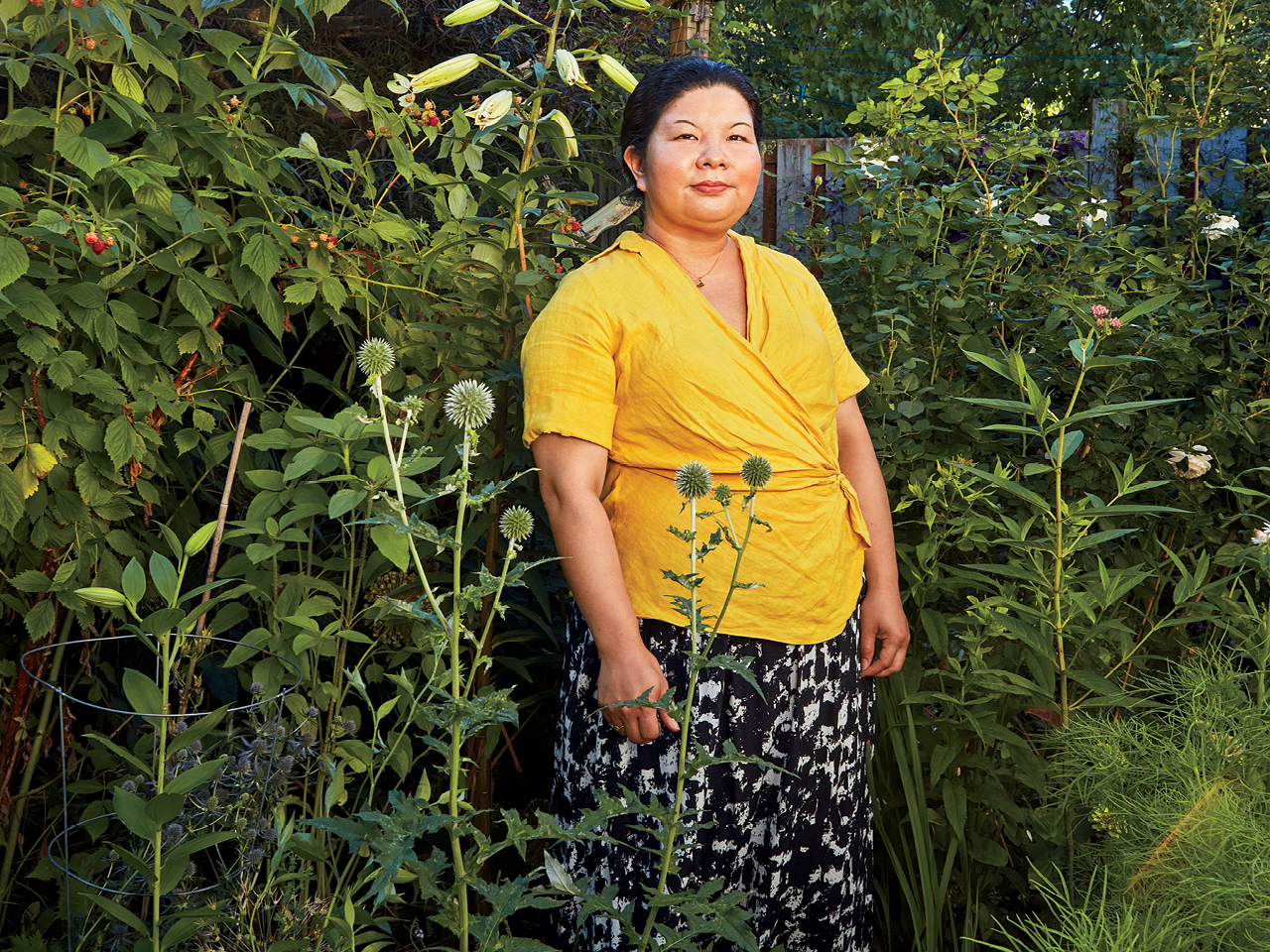 Like so many Canadians, Yukie Hanada was laid off early in the pandemic. She felt depressed and anxious but found solace in the abundant garden she’d been tending for 10 years, which was packed with shrubs, lush flowers and vines climbing over archways and up trellises. “Just going outside and playing with something alive,” she says,
“it perks up your senses.”

In fall 2020, as she divided her perennials, Hanada realized she had more than she needed, and friends suggested she sell the extras. Before she emigrated from Japan, Hanada had worked part-time in a flower shop, so she found herself considering a return to florals. Though she loves arranging bouquets, she didn’t have the space to grow cut flowers. Instead, in January 2021, Hanada opened an online seed and plant business, Hana Earth Gardens, with a slogan that reflected the inspiration for the company: “Hope is in a seed.”

Gardeners enthralled by cut flowers often have trouble finding the seed varieties and shades they want, and at $3 to $5 a packet, winter fantasies of summer gardens can get expensive. Hanada offers smaller packets of seeds for $2 or less, making them more accessible and appropriate for people growing in small spaces.

She offers everything from trendy cupcake cosmos to classic sweet peas, along with a selection of vegetables and native plants. While she relies on wholesalers and local farmers for most of her seed stock, about 10 percent of what she sells is collected from the gardens that have taken over her front and back yards. “It looks like a jungle,” she laughs.

In the end, Hanada’s mental health wasn’t just improved by the plants themselves; gardening became a social connection. She now counts neighbours as customers, is a member of the local garden club and has helped plant community pollinator gardens. In the future, she hopes to get involved in garden therapy to help others find the same peace and connection that got her through a tough spot. But for now, she’ll settle for doing that seed by seed. 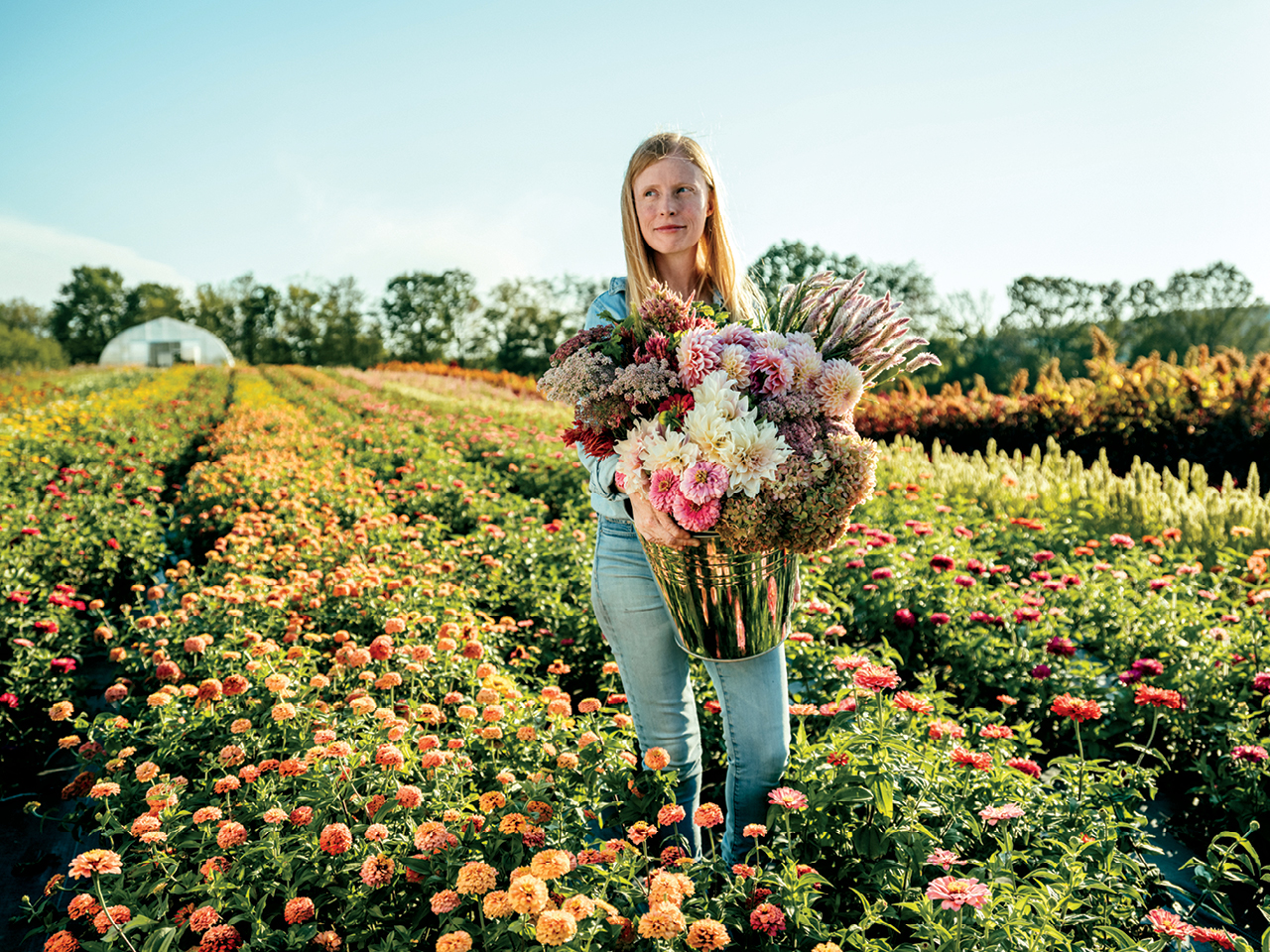 Melanie Harrington grew up on a family farm before becoming a florist. But despite her love of blooms, she eventually became disillusioned: “I was really burnt out from the disconnection that was receiving the same box of carnations week after week, whether it was January or June.” When her father passed away, she inherited the farm and decided to take a chance: She planted several hundred zinnias and then sold them at the local farmers’ market.

Eight years later, Harrington now farms three acres of cut flowers at Dahlia May Flower Farm. She’s also a force on Instagram. Though many flower farms’ accounts are a veritable calendar of idyllic, sun-shot fields, Harrington felt that was leaving out “how hard it is when you’re boots on the ground, trying to grow things for a living.” On hers, you’ll still see the obligatory armfuls of peonies, alongside photos of tractors stuck in mud and of Harrington dividing tubers with water pooling around her rubber boots. Ultimately, highlighting the dirty side of the business has shown her customers just how much work goes into a picture-perfect bloom: “They know that it matters when they make a purchase with me.”

Last year, that local buy-in helped Harrington provide thousands of plants and bouquets to nearby long-term care residents. (Her late mom had lived in an LTC.) When Harrington delivered blooms to her mom’s former home, the staff burst into tears. “It’s the best work that we’ve done in the last eight years,” she says. 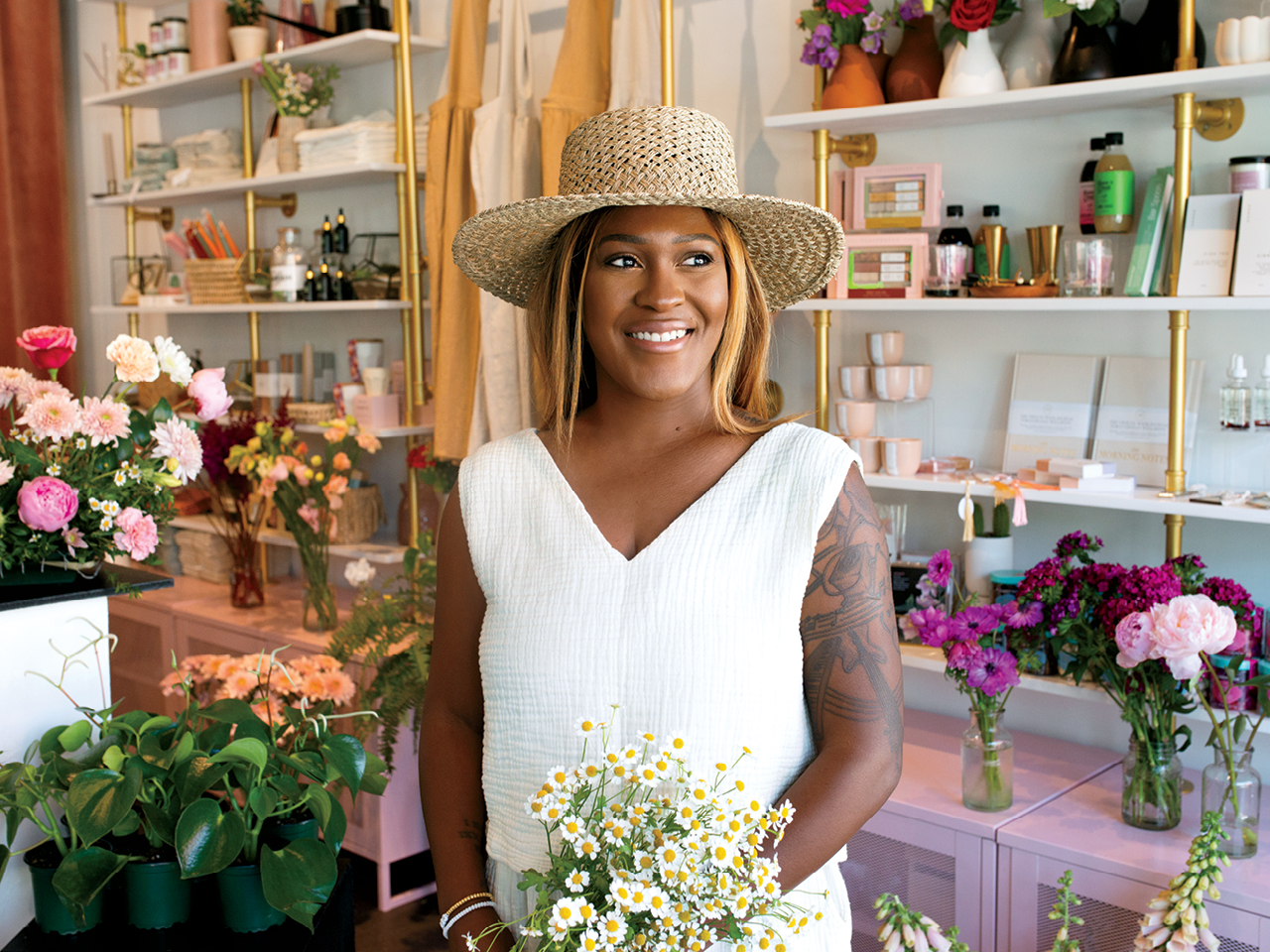 Laurence Rich believes the customer isn’t always right. When you walk into her Kelowna shop, FleuRich Creations, you might not walk out with exactly what you came in for, but you’ll leave knowing a lot more about sustainable floristry.

Rich used to focus on wedding arrangements, but as COVID-19 cancelled 2020 ceremonies, she pivoted to selling bouquets. The timing was serendipitous: People were sending flowers to loved ones they suddenly couldn’t see, just as local flower farmers found themselves with crops that threatened to go to waste. That summer, 90 percent of the flowers Rich used came from regional farms. Today, from spring to fall, local blooms remain the stars of her shop—or, as she prefers to call it, “a gallery of discovery.” It’s a place for people to learn about, and experience the beauty of, slow blooms.

Instead of responding to consumer demand for specific conventional flowers, Rich educates shoppers on locally grown alternatives. That means explaining why a single peony might cost $6, or why you can’t get a dahlia in April, or why she doesn’t carry dried, bleached palms (an imported, chemically saturated product). “I’m not going to buy them because 10 people walk in expecting to find them. It’s against what I believe in, and it’s what I think is wrong in the industry,” she says. “We don’t have to follow all the trends.”

Aside from selling blooms, Rich runs flower-arranging classes. She uses moss in place of flower foam, which causes microplastic pollution and leaches toxic chemicals into the environment, and teaches students how to source sustainable stems, whether they want to grow their own or buy directly from B.C. farms. She also features a rotation of other local products in her shop, including petal-topped candles from Okanagan Candle Co. and artisanal goodies from Karat Chocolate, and frequently collaborates with other Kelowna entrepreneurs, such as Jillian Harris. (Harris turned to Rich to help her harvest and sell arrangements from her budding flower farm, Eleven Acres.) “I want to use my platform to support my community,” says Rich. “Kelowna has been amazing to me.”