Sarah Treleaven discovers the surprising upside of dating in the digital age. 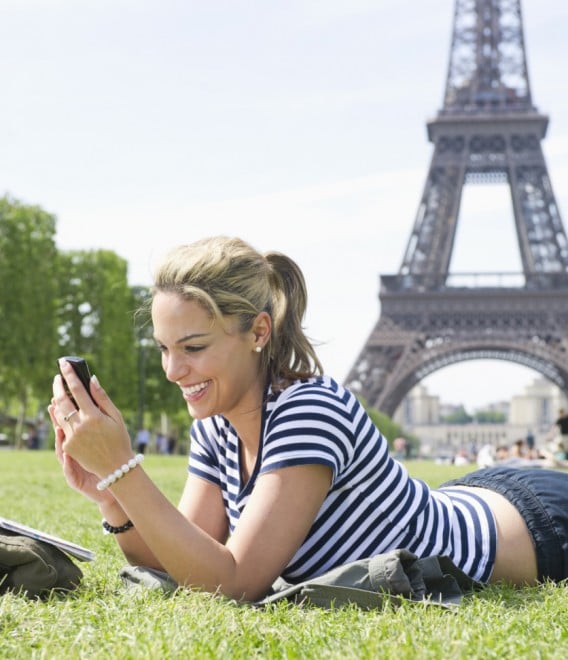 I offered my boyfriend, Jamie, a bite of cake, and saw a nearby waiter roll his eyes. But I didn’t care. I was enjoying a glass of champagne with my beau in the sunlit courtyard of the Mandarin Oriental in Paris and rapidly devouring a slice of the most delectable raspberry and chocolate-mousse cake I’d ever tasted. The moment was romantic, an afternoon to be savoured. There was just one problem: My boyfriend was only virtually present, trapped in a laptop parked on the table. We were dating over Skype, and we’d been at it for months.

Jamie and I met at the worst possible time. He had recently ended a long-term relationship, and we both had plans to decamp from Toronto for a lengthy period. About a month into dating he grabbed me around the waist and asked me to come and visit him in Tel Aviv. Only if he would come to Paris, I replied. But what would come in between was time apart.

And so we got on our respective planes, physically removing ourselves from that early magical phase of courtship. It wasn’t tragic enough to involve tears, but there was a lot of deep sighing on both parts. We continued our love affair through matching MacBooks for the following six weeks.

From Tel Aviv, Jamie gave me my first glimpse of “real hummus.” I held up plum tarts from my favourite patisserie on the edge of the Marais so he could see just how delectable they are. In Jerusalem, he took me on tours of ancient neighbourhoods, pointing out men wearing kippas (skullcaps) heading to the Wailing Wall on a Friday afternoon. I called him while I was standing over the Seine, with a view of Notre Dame, at the exact time the sky starts to turn pink. When I bought a new bathing suit, I modelled it for him and he showed just enough appreciation to make me blush.

Of course, it wasn’t perfect; there were frustrations with crappy internet signals, time differences and the overwhelming, insatiable desire for actual physical contact. But we really got to know each other without so many of the distractions that can muddle things at the beginning when you’re trying to figure out the quality of the match.

There are all kinds of tools we can use to pretend that a relationship is working, and all kinds of supporting players — friends, family, pets — who can help to prolong the (almost) inevitable demise.

For instance, when I was in my mid-20s I had a harmless sort of boyfriend — the type who’s so nice he’s impossible to take completely seriously. We spent almost every minute together in front of a screen, be it a movie or the television, anything to distract from the fact that we had little in common and even less to talk about. When there was nothing on TV, we resorted to making out — which proved a sufficient diversion for six months before I finally came to my senses.

Another boyfriend, who was great on paper, had an increasingly miserable demeanour, somewhat masked by the fact that he came from a warm, cultured and generous family. I would leave their house, my arms full of new books and leftover kugel, and count the days until I could see them all again. I knew it was over when, on a supposedly romantic trip to Paris, we ended up yelling at each other on the Rue de Rivoli and I realized that I would rather be holding hands with his parents.

But on Skype it was just Jamie and me in isolation, chatting away for hours a day, like we were on the world’s longest dinner date, without anyone weighing in on what they thought of our choice of partners.

A year and a half after we met, we now live together, along with a very wilful chihuahua. I’m still presently surprised, when I meet Jamie’s friends and family, by just how many of his stories I already know. I’ve heard about the time that he built a teepee from scratch in his parents’ backyard, and he knows my mother’s pet name for me is Bubbles. I don’t miss our time apart — there is no substitute for the weight of someone you love on the other side of the bed — but I wouldn’t trade our early months of long-distance courting. Our temporary dependence on Skype taught us how to talk to each other without having to filter out all of the other voices.