I Got A Concussion From A Yoga Accident 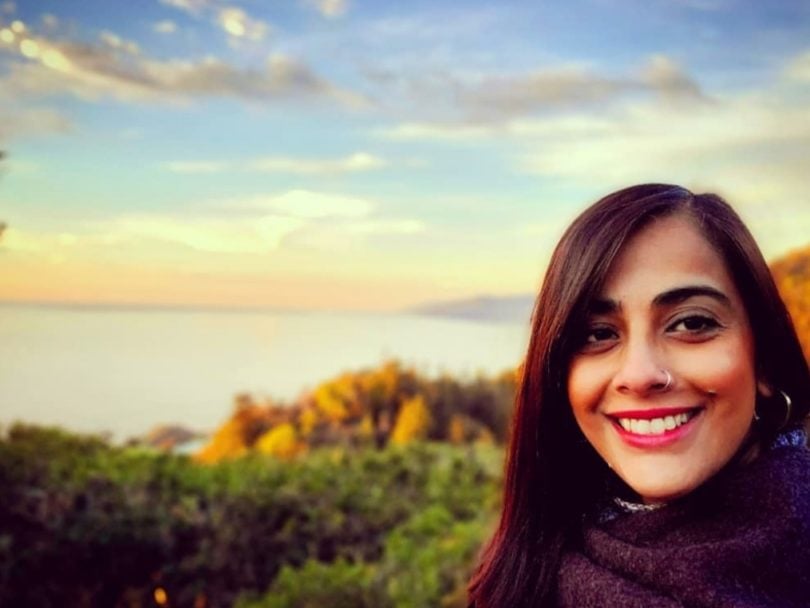 “Are you OK?” asks a friend as blood trickles from my mouth. My trembling lip is rapidly swelling, and my head is spinning.

Our Vinyasa-style yoga class had just drawn to a close, and my friend had wanted a photo of herself posing in a headstand between beautifully painted butterfly wings outside of the downtown Toronto yoga studio where we had just attended class. She needed help executing the headstand; while I was leaning over her to help her lift her legs up, one of her heels forcefully hit my jaw and chin. The kick sent my head ricocheting back towards the wall, causing a slightly dislocated jaw and subsequent lopsided mouth.

Averse to hospitals and doctors, I iced my swollen, bruised face in her nearby condo, before another friend came by and dropped me home.

The next morning, I struggled to lift my body out of bed. Was my unusual exhaustion due to the accumulated blood flow to my swollen face? Groggy and a little disoriented, I texted my symptoms to the friend who had kicked me.

“I think you might have a concussion,” she replied.

“A what?!” I thought, struggling to focus on her texts. And so, I headed to the walk-in clinic.

“How many fingers am I holding up?” asked the doctor at the clinic, who then told me to walk in a straight line, and repeat back what she had just said.

After completing the concussion assessment, I joined the 1.5 million Canadians that Brain Injury Canada estimates are currently affected by acquired brain injuries (an injury that is not hereditary, congenital, degenerative or induced by birth trauma).

Traumatic acquired brain injuries, also known as concussions, are caused by a blow, bump or jolt to the head and can result in a temporary injury, or more serious, long-term damage to brain cells.

“What you experienced was essentially the equivalent to a boxer’s hook. Impact to the jaw causes the head to spin around,” said the doc, as I squinted in her blindingly fluorescent-lit office.

As it turns out, points on the side of the chin, where the jaw is attached to the skull, are especially vulnerable to knockouts. When the jaw is struck, the head quickly accelerates, and after a fraction of a second, it decelerates as muscles, tendons and bones prevent it from spinning any further. The brain, floating in fluid, accelerates more slowly than the rest of the head. As a result, after a blow, the brain can crash into the inside of the skull, causing trauma.

“In mild cases, the person injured can shake off the blow with little more than a headache. In severe cases, brain trauma from a knock to the jaw can cause a significant concussion, cerebral bleeding [or] death,” she tells me.

The walk-in clinic doctor suggests that I take a week or two off work. There’s no universal recovery regimen for a concussion—mostly time and resting your brain by avoiding stimuli like screens, reading and excessive activity. However, after a week or two of not working, I still wasn’t okay. Daylight made me cower, and brightly lit rooms had me wearing sunglasses. Everyday noises like screeching tires, an ambulance siren or clinking cutlery in restaurants sent me into a tailspin of migraines, nausea and vomiting.

I’m a journalist. Words are my life’s work. But I found myself in a mental fog, unable to properly articulate myself and struggling to understand what people said to me. Prior to the kick, I was strong and active—thanks to regular boot camp classes and strength training—and I worked as a breaking news journalist, chasing stories during 10-hour days for The Associated Press. Now, I felt like I was suddenly on the fast-track to senility.

I was relegated to dark rooms. With no reading, writing or Netflix to pass the time, I tried to meditate and nerded out on audio books. I treasured occasional friend visits and walks when I felt up to it, but admittedly mostly spent my time in recovery ruminating and worrying about my health. I lived in daily FOMO as the world passed me by.

I felt disconnected from my friends and family too, fuelling the anxiety and depression that are commonplace symptoms for concussion survivors. Traumatic brain injuries (TBIs) can affect all aspects of your health: physical, cognitive, mental and emotional, and for many, the latter can be the most difficult to navigate.

Two years (and counting) of recovery

The two weeks I took off work to recover stretched into months—and those months stretched into what is now more than two years of recovery. My concussion morphed into post-concussion syndrome (PCS), an arbitrary diagnosis for those whose symptoms persist beyond one or three months, depending on the definition used.

As I spoke to more and more folks whose lives had been significantly impacted by concussions and PCS, I learned my story wasn’t uncommon. As it turns out, I was actually one of the luckier ones.

To help me better understand this invisible illness and to aid my healing, I saw one of Canada’s top concussion specialists, in addition to other neurologists, numerous family doctors, sports specialists, osteopaths, physiotherapists and naturopaths, all in search of a cure. Each one had a different suggestion.

Refrain from life as you know it.

Exercise mildly every day. (Unless you experience nausea, which I did.)

Don’t do too much, and stay indoors. (But maybe go for a walk if you can handle it.)

Be social! (But don’t go out, the noise and stimuli will kill you.)

Take these extremely strong anti-migraine meds. (Oh, and these other meds to counteract the side effects.)

If I wasn’t already incredibly confused, these contradictory recommendations made things tougher.

As for the icing on top of my brain freeze, along with losing aspects of my cognitive functioning, I also started losing friends for reasons I’m still unsure of today—including the one who executed the kick to my head. This felt as confusing, heartbreaking and impactful as the brain injury itself. The loss of friends was particularly difficult after a sudden and unexpected breakup months before the concussion, along with a round of layoffs that unceremoniously ended my 11-year career as a reporter for The Associated Press. And since I was technically a contractor with the AP during that time, I didn’t qualify for Employment Insurance, nor was I able to receive any kind of financial assistance. As a result, my savings quickly depleted during my first year of recovery when I was unable to work.

My life as I knew it had crashed and burned within a matter of months. With a dwindling support network, I not only felt physically alone in my dark room, but spiritually and emotionally alone, as well.

The loss of these treasured relationships led me to believe that I was unlovable—which, in turn, made me withdraw further from my remaining relationships.

As time went on, I discovered what suggestions worked best for me: taking mindful walks with my sunglasses on and earplugs in, retreating into nature as often as I could, resting as much as possible and listening to audio books. Gradually, I came to appreciate the quiet and slow living that concussion recovery requires of me.

A year after my injury, I landed an amazing one-year maternity leave contract as a senior lifestyle editor at HuffPost Canada—a role that turned out to be difficult to effectively execute post-concussion, much to my chagrin. While I was articulate enough to make it through the five rounds of interviews, I found it challenging to take in all of the new information, learning, and varied duties that came with the job. (Executive functioning in many concussion survivors is compromised, as is their ability to multitask after a brain injury.) When it came time to step back into an office environment, I couldn’t handle the screens and bright lights. I became the weird new employee donning sunglasses at my desk while trying to manage near-constant migraines for the first few months. The migraines settled down eventually and while I made solid progress over my year there, that progress was slow, and I was eventually demoted to an editor/reporter position. My ego took a hit. I often also worried about how I was being perceived—considering that my new colleagues were unaware of my previous abilities and self—which didn’t help my anxiety.

That contract has since wrapped up, and now I’m at peace with sitting still and shaping my own story as a freelance journalist. I am less career driven and more focused on my health, relationships and savouring the richness of a slower life.

The migraines have mostly become a thing of the past. And while sunglasses and ear plugs remain my go-to accessories, I am now able to attend chill concerts and events. Cognitively, however, the brain fog is still occasionally there; the memory issues can be embarrassing; and the lack of strong focus and concentration can still be frustrating. But like most concussion survivors, I am taking it one day at a time, living in a constant state of push and pull. Some days, I feel like my symptoms were a thing of the past, while on others it feels as though the world isn’t suitable for someone with a brain injury.

I initially struggled with accepting this “new me”—something many concussion survivors talk about—but now I better understand that there are no constants in life. We are always contracting and expanding, taking steps back in order to step forward into our next evolution, flowing into new versions of ourselves.

As I continue my journey, I carry the concept behind the Japanese art of kintsugi—mending broken pottery by filling the cracks with gold—with me. I love this as a metaphor for healing ourselves. Sometimes in the process of recovery, we can end up creating something more unique, more beautiful and more resilient.