To Connect Us To Our Afghan Heritage, My Dad Bought Us Plots Of Land In Kandahar, Saskatchewan

After my dad committed our inheritance to a dying farming town of 15 residents, two hours from the nearest airport, we took an epic journey. We discovered way more than a patch of earth. 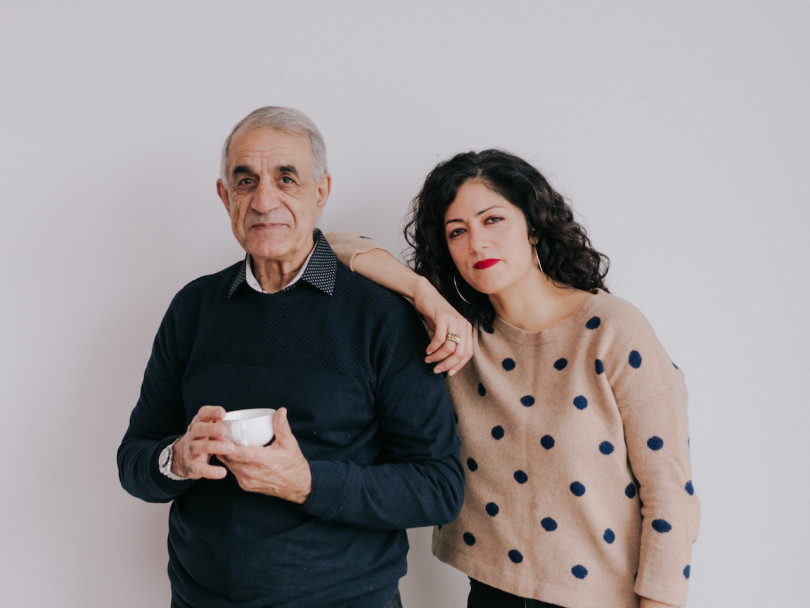 “Do you think you were making it easy for yourself by making a film about your family?” a university film student asked me during a talk I gave about my first feature documentary, A Kandahar Away. The question surprised me and it stumped me.

When I started pitching my documentary five years ago, I thought it would be an amusing endeavour. Seemingly on a whim, my father had bought my siblings and I plots of land in Kandahar, Saskatchewan, and I wanted to document our family trip to our new acreage. My family is made of strong personalities and opinions, and so I did think long and hard about inviting multiple cameras along on our first family trip in over 10 years and even harder about sharing our intimate family arguments with an audience full of strangers. But the making of this film was far more difficult than I ever imagined. It forced me to confront my preconceived ideas about my family, myself and even my country.

My family of seven—I have two sisters and two brothers—moved to Canada from Kandahar, Afghanistan in 1991. In those early days, we were busy learning the language and customs, but once we settled into our life in Vancouver, Canada my father’s memories of Afghanistan started flooding to the fore. He started to amass a sizable collection on his homeland, building a library of books in Pashtu, our mother tongue, and buying VHS tapes of films either filmed in or about Afghanistan. When he discovered that there was another Kandahar right here in Canada—in Saskatchewan, about two hours east of Saskatoon, about 10 years ago, he bought each of us a plot of land big enough to build a modest sized house on. I thought it was ridiculous. Going simply on the connection of a name, he had committed our inheritance to a dying farming town of 15 residents, two hours from the nearest airport.

There was an obvious reason my family had not taken a family trip together in so long—we are not exactly easy-going people and “going with the flow” is a foreign concept to us. Like in most families, we each play a specific role that we adapted early on in life. My sister Hasina, for example, is the middle child and the bridge between the different alliances we draw in the family; between the brothers and sisters, the older and younger and the more temperamental and less so. My brother Nasser on the other hand is the spoiled baby of the family with almost superhuman athletic abilities and I’m the absentminded professor and artsy weirdo, with the patience level of a five-year old. 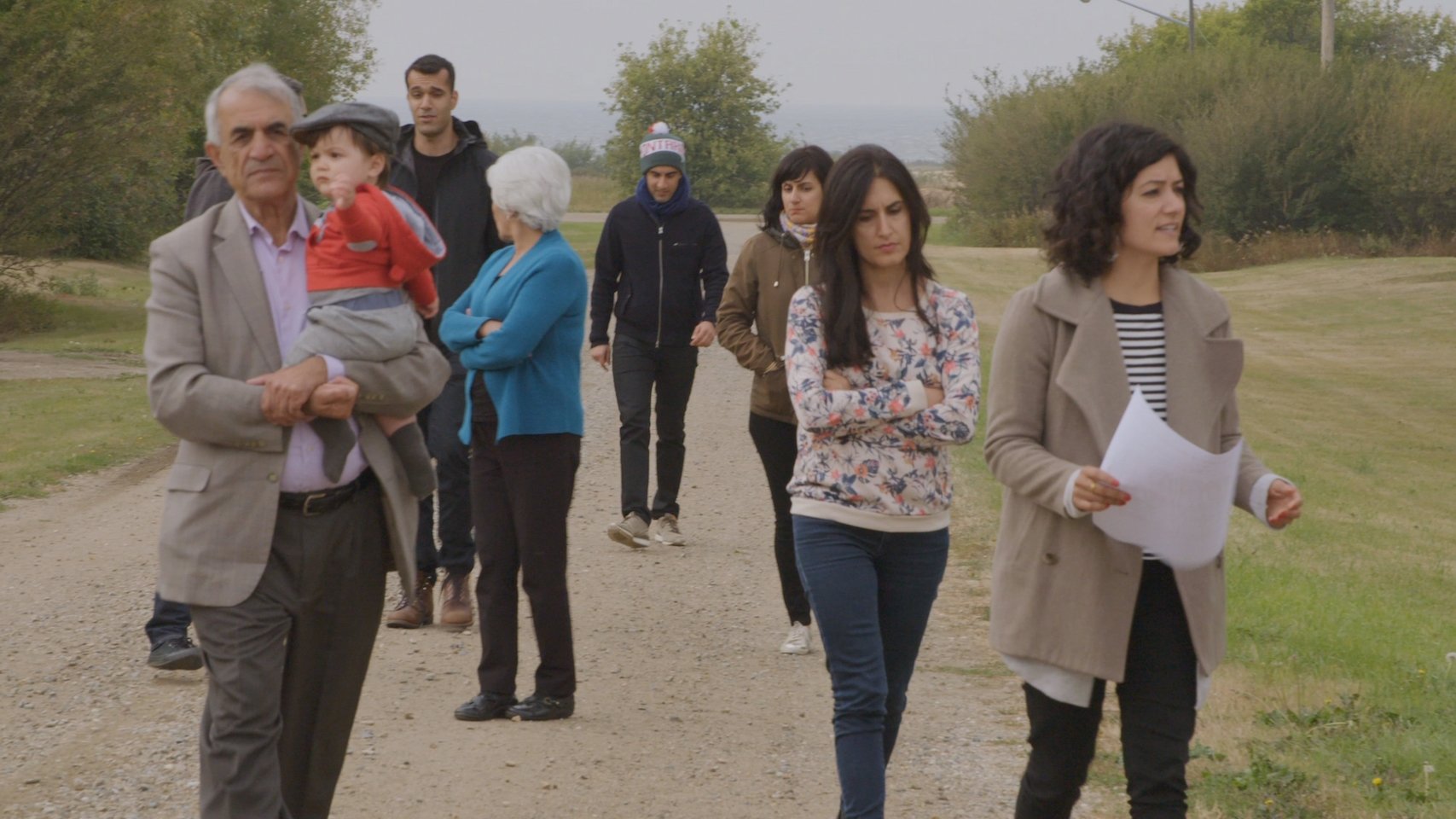 The whole family walks along a country lane. (Photo, courtesy of Kitab Productions / “A Kandahar Away”)

To make this documentary, I had to plunge headlong into these roles, and analyze what makes my family tick. I spent countless hours with my father, talking about this incomprehensible gesture. I joined him on many walks down memory lane and heard the stories of his early road trips through Afghanistan and his difficult memories of leaving his parents behind. I asked questions I never had the occasion to ask, or if I’m more truthful, never had the patience to ask. What was it like for him, a man with five children to migrate as an adult from a country and culture that he deeply loved to one that is different in every regard, from language and lifestyle to weather? I learned to see my father not as misguided in his act but as someone seeking a connection and continuity with the Kandahar he loves. For him, his present is deeply coloured by his past and it is impossible for him to let go. His purchase of land in the Canadian Kandahar is his way to let us have a piece of home, even if it’s the Canadian Prairie version. I realized that although he is happy here, a part of him will always remain in the more uncomplicated past of Kandahar, Afghanistan. And I realized that’s okay.

During our visit to the Canadian Kandahar, my father made a suggestion that tested my new-found empathy for him. As a way to connect the two Kandahars even further, he suggested we build a war memorial to fallen Canadian soldiers in Afghanistan. Although my father doesn’t see it the same way, for us siblings and self-described socially progressive lefties, the idea to memorialize an invasion is an outrageous one. 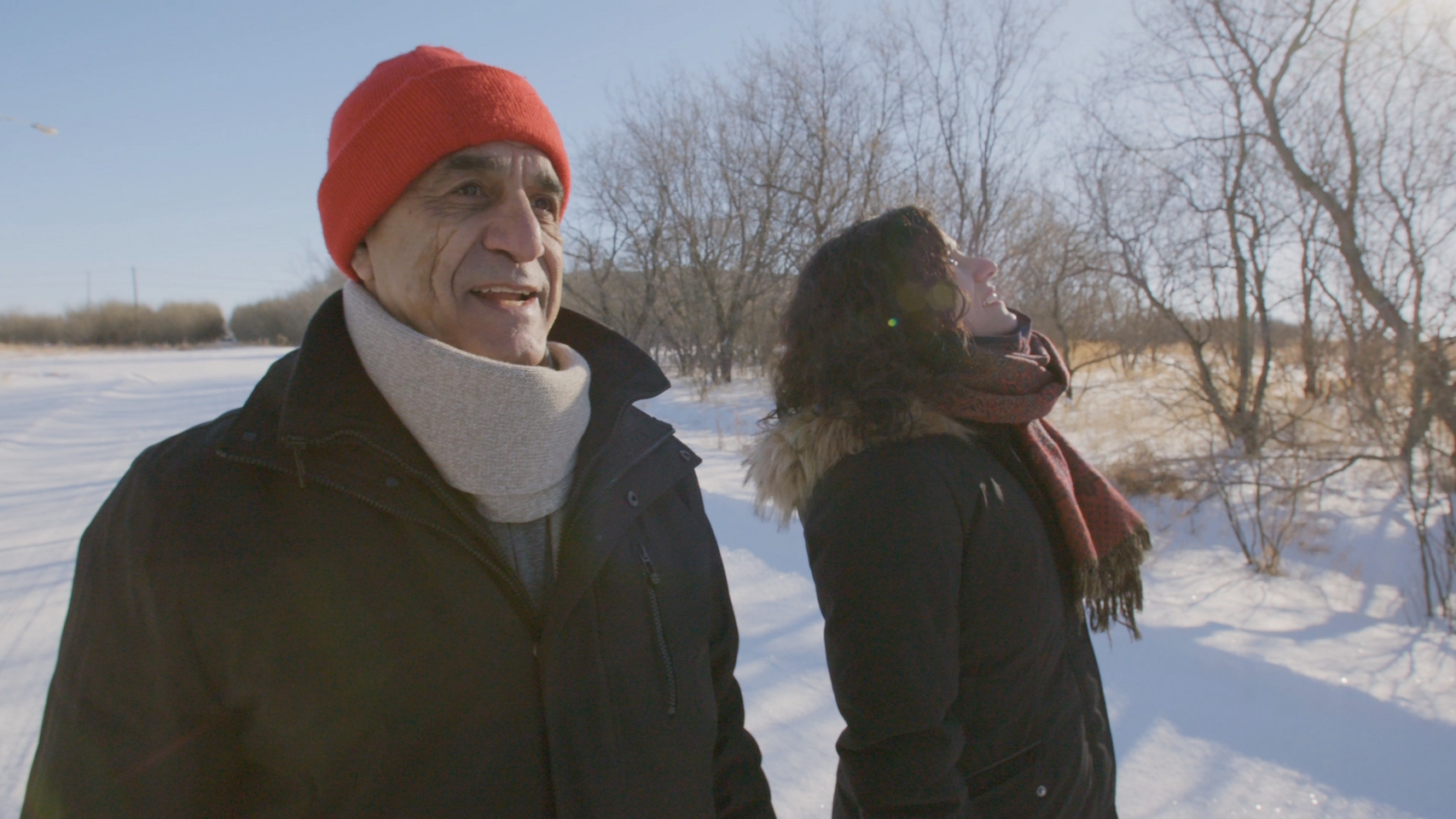 Abdul (left) and Aisha walk on a snowy road. (Photo, courtesy of Kitab Productions / “A Kandahar Away”)

Before this shoot, I would have guessed that the only person who could bring peace and reconnect the different sides of the argument would be my sister Hasina, a natural peace maker. I looked to her to ask for understanding and patience in moments of disagreement, but she shattered my expectations and the role I had assigned her. Hasina came out the strongest in opposition to my father and she did not hide her moral outrage that an Afghan refugee, who fled war and violence, wanted to memorialize the Canadian military. My respect for her has grown and I realize that she is willing to remain in uncomfortable territory if she feels she is in the moral right.

But perhaps the biggest shift has been my relationship to my brother Nasser, the youngest of us five. With an age gap of 10 years, we are a generation apart. There are moments of his interview footage that makes me cry, no matter how many times I’ve seen them. When asked what our initial family road trip may have meant to him, Nasser responded that he realized how much my siblings and I help him emotionally. Instead of turning away from him when he is worked up over something, we calm him. The sincerity of this moment of revelation has remained with us both. He has been in touch far more frequently than before our testy family trip and over the last year I see him taking time to make plans to see me and connect face to face.

Looking back, the long hours in the editing room reviewing the footage of my family has given me a real opportunity to rethink the roles I’ve ascribed everyone. We all fall into roles early on in our family lives and it’s hard to escape the traps we get caught in. These past five years have allowed me to reconsider my own role. Knowing that I am often portrayed as the scatterbrained one who once lost her keys three times in one week, I was afraid to play into this while on location. I took up meditating to allow me to not only focus on what is in front of me but to also learn to be patient with my family, the film crew and above all myself. My family felt the difference and my brother Nasser jokingly described my patience on this trip as “Mother Theresa levels.” Making this film has been a real gift—it’s allowed me to see myself and the rest of my family as we really are, with all our charming (and less so) parts. 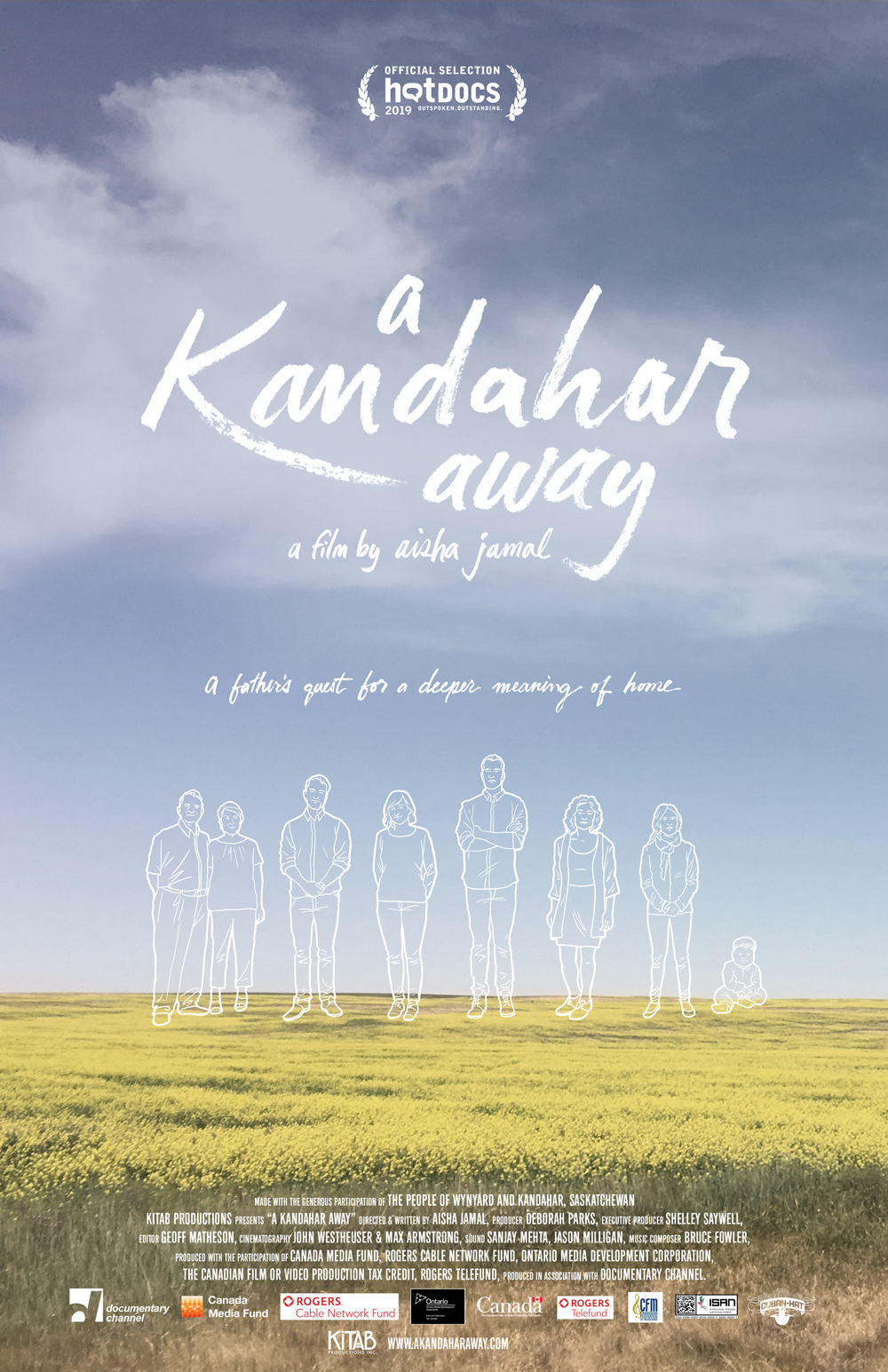 (Photo, courtesy of Kitab Productions / “A Kandahar Away”)

Now that my film is about to premiere, I am getting congratulatory messages from filmmaker friends that refer to my act of making this film as “brave” and “courageous.” As experienced filmmakers, they understand involving those closest to you in a film project is anything but easy. Despite its many challenges, I am thankful to have had the chance to share the story of my urban, Afghan-Canadian family and along the way, discover that who we think we are and how we relate to each other is not set in stone but can always evolve for the better.

Aisha Jamal is a Toronto filmmaker, film programmer and college professor. A Kandahar Away is her first feature length documentary. It premieres May 1st at Hot Docs Canadian Documentary Festival.