There's no guide to queer motherhood in a straight world

Becoming a parent alienated me from mainstream culture in a way I never would have predicted. 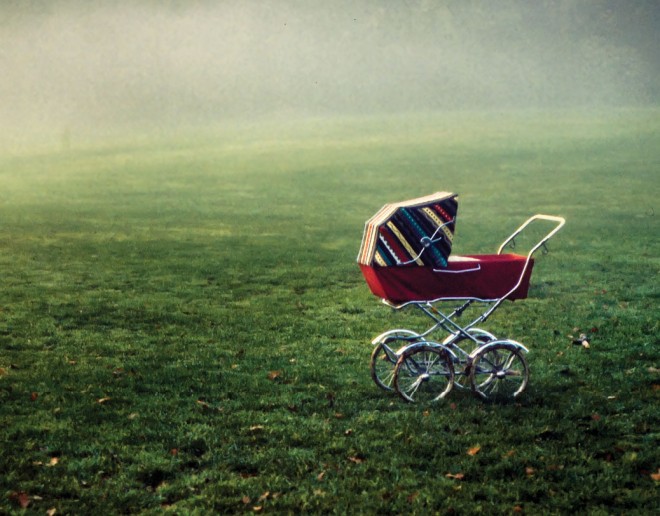 I was in a prenatal class the first time I realized I was a fraudulent mother. “Dads,” said our instructor, a lithe doula with a faint British accent and an aura of calm reassurance similar to Pigpen’s dust-cloud corona, “It’s up to you to be a support while the moms begin to actively labour.” I froze and tried to focus on the wood grain of the expensive white-oak floor.

We held fistfuls of rapidly melting ice (a pain-management exercise) and we visualized palm-fronded beaches (another pain-management exercise). Between those activities, we talked at length about the miracle of birth  —  or, more specifically, the logistics of how the tiny, alien beings curled up inside the various uteri in the room might emerge into the great wide world.

“And sometimes,” the instructor continued her thought, “the best way to get the baby out is the same way you got the baby in there in the first place.” She shot an impish grin at the anxious faces sitting around her, a ring of bleary-eyed proto-parents wedged on bolsters and worn batik pillows on the floor of a yoga studio in downtown Toronto.
Around me, people giggled. I didn’t get it. And then, just as the feeling started to return to my soggy, ice-numbed palms, I did. As the doula recommended positions to accommodate third-trimester bellies and reassured the earnest dads with their hands on their pregnant partners’ lower backs that, no, it was highly unlikely that their emphatic thrusting would hurt their kid-to-be, even during pre-labour, a clammy discomfort set in. I wondered, briefly, if I should ask for clarification: Would siphoning a syringe of freshly-thawed semen and passing it to my pregnant partner, lying on a bed, help us shake out our baby?

Related: The baby girl I almost had

Friends have described this phenomenon as “lesbian dad syndrome”  —  the condition of feeling like an impostor, a fake, experienced by the non-gestational half of a two-mom couple. Some of the feelings that overwhelmed me on the floor of that yoga studio were rooted in the deep anxiety that I’d have no real place as a parent; that in the absence of a biological connection, I wouldn’t know how to love my kid; that without that innate tie, our bond would be brittle and fraught.

But above and beyond that prenatal panic, my uneasiness was more basic: I felt profoundly, alarmingly alienated from everyone else in the room. I wasn’t just an apple in a room of oranges. I was a hedgehog in a room of bowling balls. Queer motherhood felt like an unwitting conscription into a freak show.

There’s a deep irony in that statement, I know. At least as long as I’ve been alive, the LGBTQ community has been fragmented by debates over which issues to prioritize, which fights should commandeer the most attention and energy. The ones that win out —  the ones that inspire the loudest ruckus and capture the public attention  —  are the ones that most closely align with mainstream (read: middle of the road) mores; same-sex marriage and the rights of gay and lesbian folks to become parents are chief among those causes. For years I’ve sided with dissenters who argue that these issues are not just assimilationist (read: pandering to family-values diehards), but only relevant to a privileged few. When trans women of colour are being killed in the streets, when disproportionate numbers of LGBTQ youth are homeless, how can we justify yelling about gay weddings?

Related: This doc is making reproductive care much easier to access

It’s easy to take that stance when I live in Canada, where I’ve had the right to marry my girlfriend for a decade now, where daycares that refuse to take in the children of a lesbian couple can be held in violation of the human-rights code (sorry, Indiana). And yet, and yet: I can imagine few things that fall further from the radical roots of queer culture than getting hitched. Or having babies.

In theory, I still subscribe to those beliefs. I’ve always felt itchy about the idea of marriage in general; I’ve bristled at the prospect of aspiring to create the kind of gay poster family that will sell a Subaru. Yet becoming a parent has made me feel more queer  —  not just gay, or lesbian, but defiantly, non-normatively queer  —  than I’ve ever felt in my life. More than anything else I’ve experienced, motherhood has made me feel profoundly alienated from straight people and straight culture.

I tried hard not to feel like a fraud in that prenatal class  —  I was so good at holding ice, for so long!  —  but there was something so jarring about the realization that even in the most progressive enclave, a New Age-ey course in a sandalwood-scented multipurpose wellness centre, with vegan snacks and herbal tea that tasted like bark, in a wholly gentrified pocket of downtown Toronto, taught by a smart, politically-informed doula, would revert to a default mode of heterocentrism in the context of parenting. I wanted that moment to be the exception; I’ve been forced to confront the depressing reality that, when babies and mommy culture are involved, it’s almost always the rule.
It feels shitty to make that kind of blanket statement, and I’ve never predicated my friendships on the basis of sexuality. Most of my best friends are straight! Nearly all of my favourite parents are straight! But outside of my cozy, queer-conscious niche, it seems, there’s no space for the kind of mother I am.

Related: My secret to raising a feminist boy: thankless chores

I read parenting books with a kind of abject horror, half-convinced that Dr. Sears, paragon of attachment theory, is secretly some kind of throwback stand-up comedian. In his world, mothers are primal, selfless nursing machines, saintly hosts for the mewling beings they’ve birthed and which remain basically fused to their bodies for close to a year. Fathers appear for wacky cameos, to anxiously bounce their infants just long enough to let their wives grab a 15-minute shower. (New moms let themselves get filthy, apparently.) Mothers, I’ve learned, have an uncanny sense of their newborns’ every need; they physically ache before a cry is audible; they’re so attuned to their children’s auras that they would never accidentally roll over on top of one while co-sleeping. Dads, those doltish galoots, have breast pockets on their button-down shirts in which they can keep pens (babies love them, apparently?), and can hum in low voices. Sometimes, husbands  —  always husbands, always  —  become jealous of the new additions monopolizing their wives’ bodies and breasts, and they want sex. (New moms need to understand that new dads need attention too, apparently.)

The realm of parenting is alarmingly gendered, alarmingly binary. More and more, the openness I used to feel in unfamiliar circles is dissipating. I’m on guard, anticipating that I’m stepping into a morass of presumed heterosexuality  —  because I am. Not long before my kid catapulted into the world, a full six weeks early (but healthy!), I joined two different Facebook groups: one specifically tailored to LGBTQ parents, and another general forum for local moms, though a brave dad or two might comment on a thread from time to time.

The disparity between the two is startling. I’m grossed out by the idea of only sticking to “safe spaces” with people like me, but it’s tricky to navigate a zone where a mom is not only assumed to come as part of a matched set with a dad, but is, without fail, the person who carried and birthed her kid. I wince at the periodic “Ladies, don’t you hate how lazy your husbands have been since the baby arrived?” posts; I feel heartsick when gleeful moms share threads full of photos and marvel to each other about how much their infant resembles them/their husband/”a perfect combination of us both.” I lurk, morose, knowing how often I’ve scanned my kid’s face in the hopes that, through some strange magic, he might’ve absorbed elements of me through osmosis. I fret, not only about myself and other queer moms (who, by and large, seem to be completely absent from this community), but also about whether any of the other parents have adopted, or struggled with fertility issues.

Gender, more than anything, is a hellish quagmire in parenting culture. Our kid has a bike helmet with flowers; I brace myself for critical comments from people who’ve decided we’re using him to make a political statement. (It’s just an adorable helmet!) My own relationship with gender is complex  —  I’m a girl, I’ve always been a girl; I yearn, often, for androgyny; I’m constantly at war with bras and breasts and anything else bound up in performing femininity; I wear makeup and feel like I’m in drag  —  but I anticipate, already, the complicated territory I might encounter if I decide to get pregnant. And then I think about trans folks I’ve known who’ve conceived and carried their own kids, and how undermining it must be to come up, again and again, against the notion that pregnancy is some acme of femininity. (I’m grateful in these moments for the advent of Butchbaby, for the concept of “alternity” wear.)

I didn’t grow up assuming I’d someday become a mom. Around a decade ago, my own mother told me I was the “least maternal” person she knew  —  an assessment based largely on the fact that, as a kid, I eschewed dolls in favour of stuffed animals and My Little Ponies. But even when I idly considered the concept, this particular challenge never crossed my mind. I didn’t anticipate how much I’d be on constant alert, that I’d find myself changing the words in Dr. Seuss books (not everyone has a dad).

More than anything, I didn’t anticipate how much parenthood would reanimate my investment in queer politics, in being out, in fighting not just for the causes that affect me but for everyone on the radical fringes. Becoming a mom, so far, is amazing. It’s weird and fascinating and hilarious and exhausting. And it’s the farthest I’ve ever felt from the norm.

This piece was originally posted to The Hairpin.

More:
How a traditional mom learned to champion her gay son
9 women share mortifying moments from the gynecologist’s office
Why is it so hard for some women to get their tubes tied?