This cottage went up fast—in just two days!—but its warmth is testament to the time and care its owners spent turning the empty shell into an inviting home. 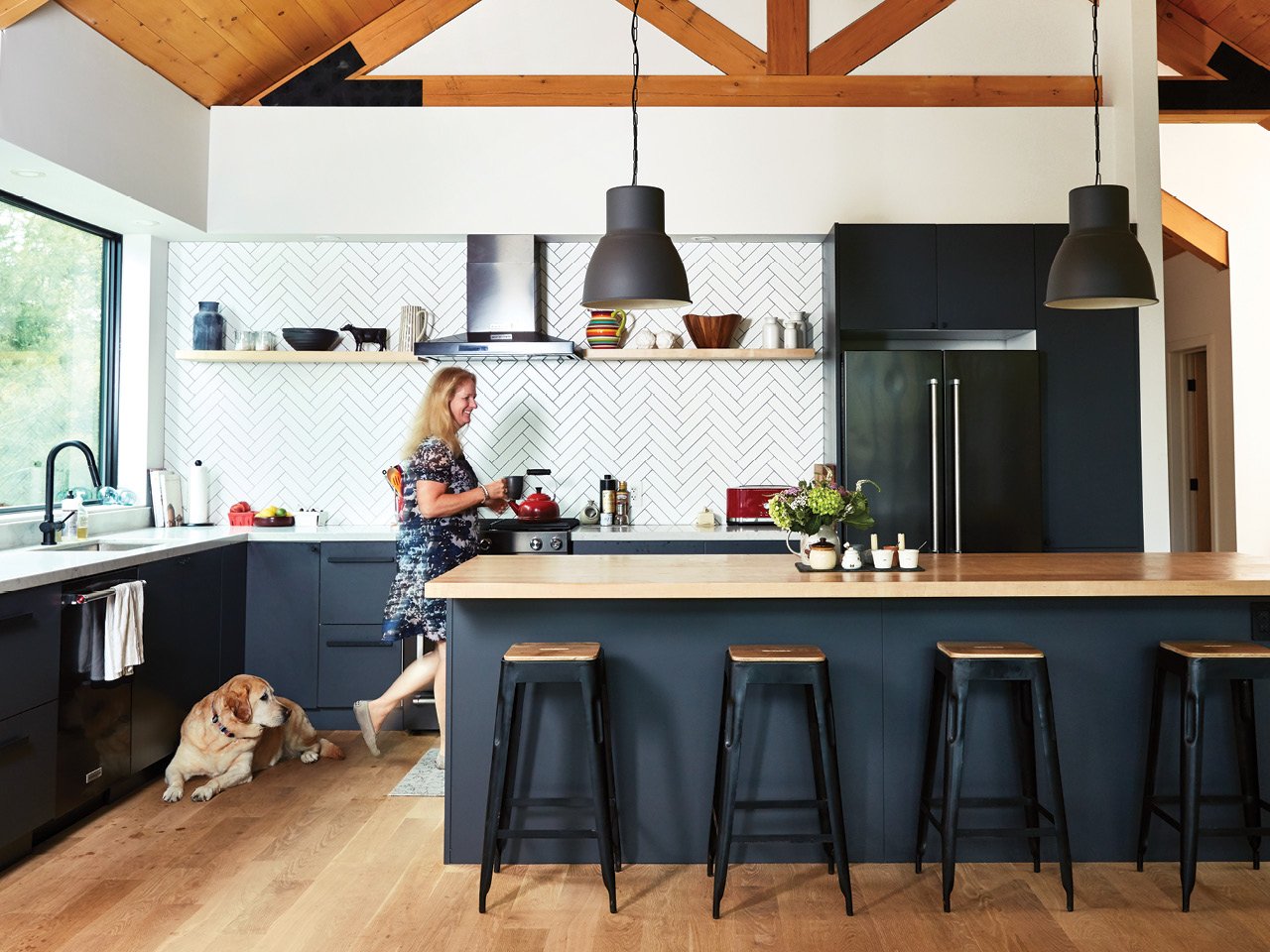 Mary Abbott and Kevin Gormely’s four-bedroom cottage outside of Collingwood, Ont., is, in one sense, a giant Lego set. The roof, walls, floors, windows and doors were built in pieces at the nearby factory of Legendary Group, a prefab company. The various components were shipped on rumbling flatbed trucks to Mary and Kevin’s site, a two-acre tree-covered patch at the base of the Beaver Valley Ski Club. In less than two days, contractor Martin Mansikka, owner of Talo Green Build, snapped it all together. “The equivalent would have taken up to two years without prefab,” says Mansikka.

The speed with which the structure went up belies the months and months, both before and after, it took Mary and Kevin to turn the empty shell into a warm, inviting home. All of the finishing touches—the Spanish tiles in the master bathroom, the open kitchen where Kevin bakes sourdough bread, the felt tapestry hanging above the stairs that Mary found in a textile shop in Stratford—required slow care and intense consideration. For the homeowners, that was the fun part.

The Belgian-made Stûv fireplace is efficient enough to heat the whole upper level and minimal enough to not distract from the view.

Mary and Kevin are both busy professionals who, in their downtime, are passionate about design. “It’s an outlet,” says Mary. “I enjoy thinking about these things.” Prior to the cottage, the two had some real-world practice. Their main house in downtown Toronto was custom-built for the couple and their teenage boys, and reflects their passion for collecting furniture and decor, most of which comes from Canadian talents. They have a chandelier by Toronto woodworkers Brothers Dressler, oil paintings by British Columbia artist John MacDonald and a light by Omer Arbel, who co-designed the Vancouver Olympic medals with Indigenous artist Corrine Hunt.

A professional architect guided the couple through the process of conceiving their Toronto home, showing them the thought that goes into choosing functional floor plans, optimal window placements and the perfect finishes. “We learned a lot from that,” says Mary. “It taught us to really weigh out the consequences of our decisions. How will certain materials come together, look in a space?”

For their cottage, Mary and Kevin hired Mansikka to manage the project—but they decided not to hire an architect. “We wanted to save money,” says Kevin. “I also love all the planning that goes into a home,” adds Mary. “I was happy to take it on.” So, they did the brunt of the design work themselves, implementing what they learned from their Toronto house and learning a great deal more in the process. 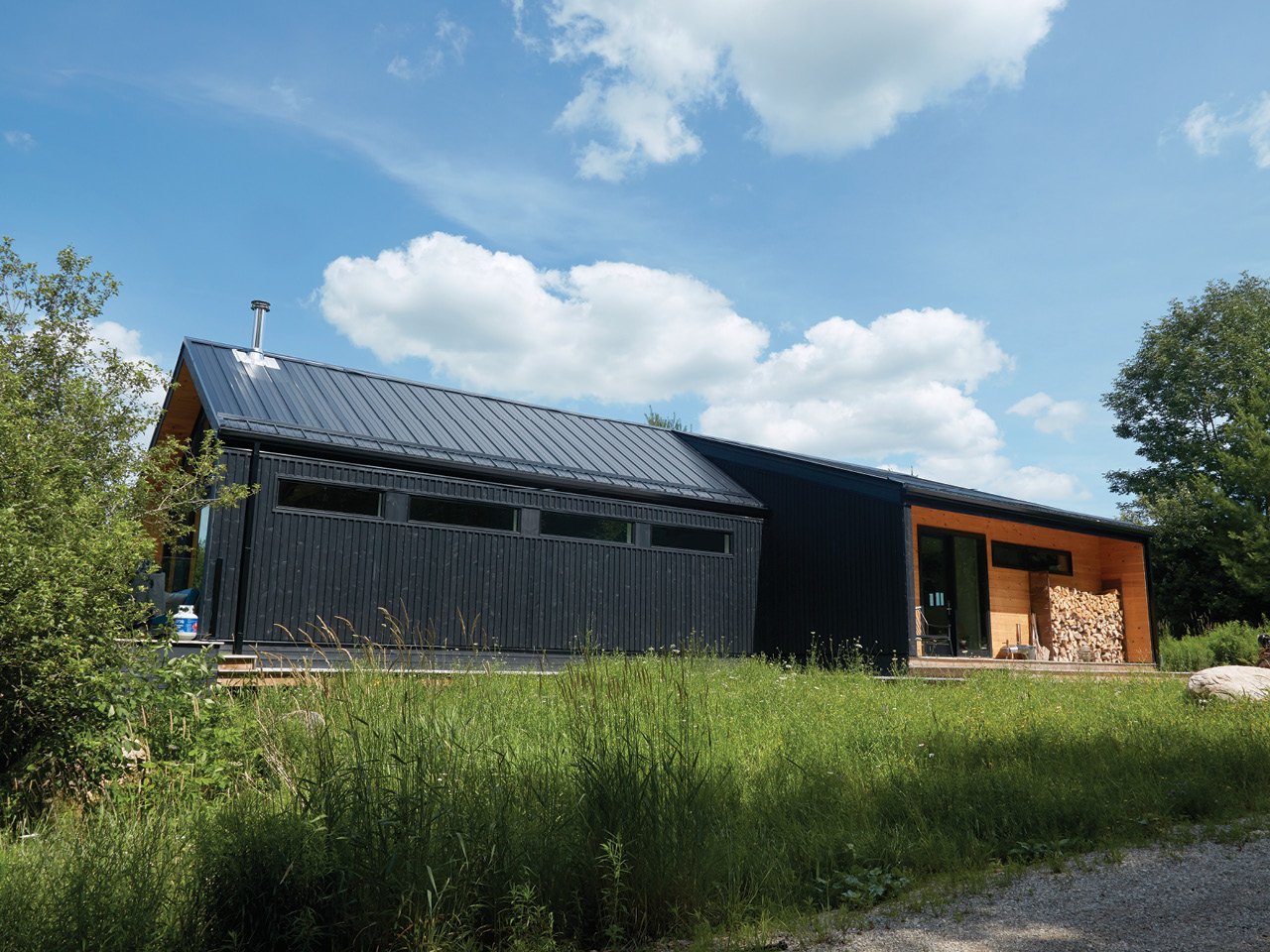 The number of windows on the north face of the home is limited to reduce the amount of hot and cold air that can escape through the glass.

Finding the lot itself was simple. They stumbled across the land when renting a house nearby in the winter, enjoying skiing and snowshoeing at Beaver Valley. They opted to own something permanent after they realized the area had a lot to offer in the summer. “Our sons fish and swim in the nearby river,” says Kevin. “The Bruce Trail runs right beside our place. It’s great hiking.” Plus, the site is simply stunning. It lies in the nape of a tree-covered valley with views up to rugged cliffs—the edge of the Niagara Escarpment. There are neighbouring homes, but through the windows, all one sees is leaves and greenery in the warmer months and skiers on the slopes come winter.

Less simple: the million and one considerations involved in building the cottage. Going prefab gave the couple a head start. They based their plans on a standard model. But they tweaked just about every single detail, big and small. “For the inside ceilings, the plans had narrow, tongue-and-groove pine boards,” says Mary. “We wanted wider boards and shiplap style, which we thought was more modern. On the exterior, we doubled the number of battens and made them closer together.” (Battens are vertical wooden slats that neatly cover any gaps between the siding.) They also scrapped all the casings around the windows, slotting them into clean, contemporary drywall openings instead. 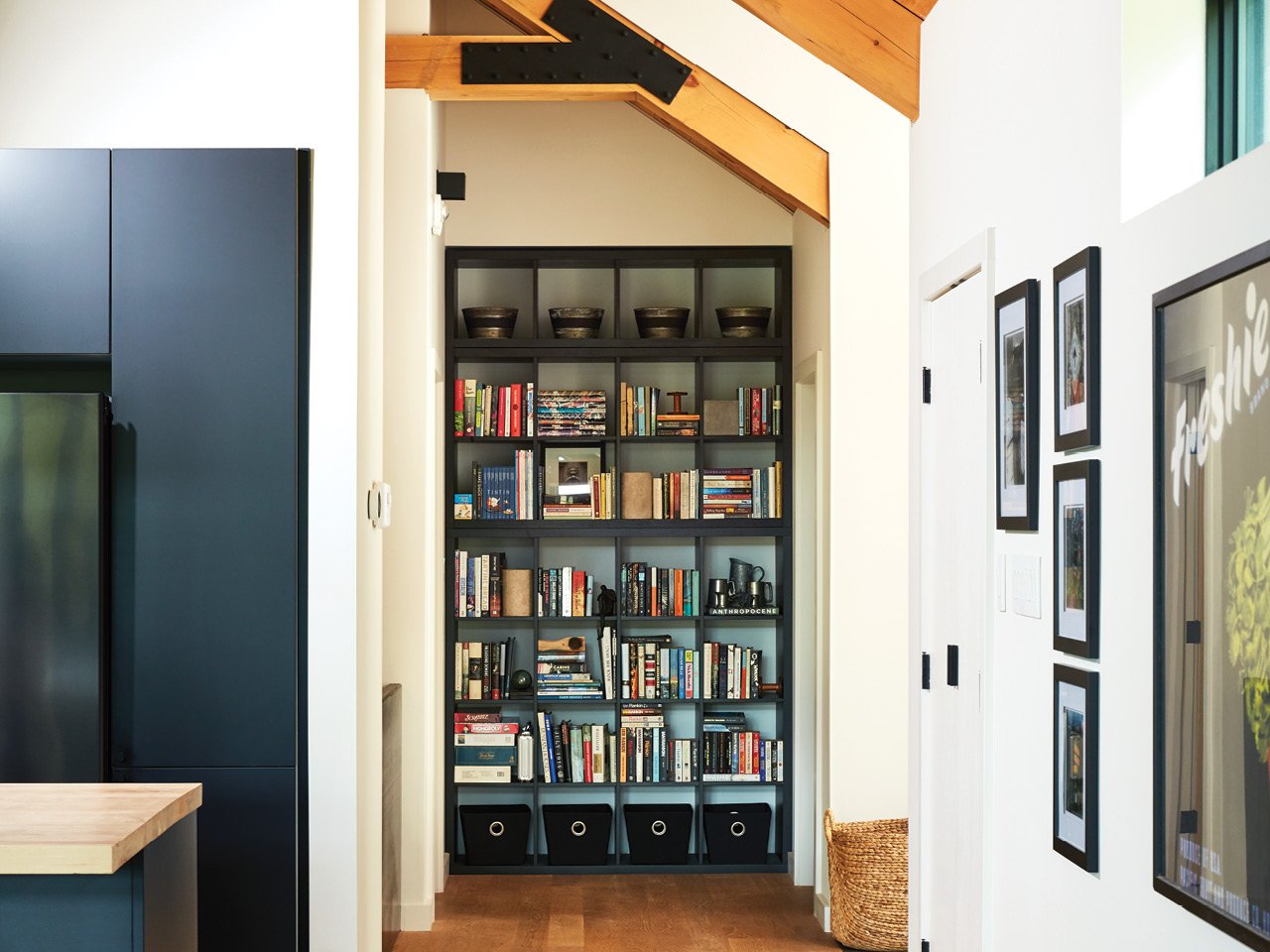 Mary and Kevin read a lot, hence the big bookcase at the end of the hall. It looks custom-made for the nook, but it’s actually stacked Ikea modules.

There were some limitations. “The engineering is very precise on a prefab,” says Mary. “We couldn’t just move a column or insert an extra window.”

That said, the place appears to be entirely bespoke. And a few things are custom-made, like the live-edge wood vanity in the main-floor powder room and the inky black metal guard around the stairs to the basement, which was commissioned from local artist Ken Roy Johnson.

Most of the finishes, however, are off-the-rack. Like the $1 subway tiles in the kitchen backsplash. Mary just had them turned on angles to form the classic herringbone pattern. The kitchen itself is Ikea, as is most of the bathroom millwork, closet shelving and bookcases (not to mention some of the bedding and light fixtures). But Mary has a secret for upscaling discount finds from the Swedish giant. “We commissioned our door fronts for our kitchen and bathroom cabinetry from a company in California called Semihandmade,” she says. “They are so awesome.” The fronts are inky, matte-black panels that make the surrounding white oak and white walls pop all the more. 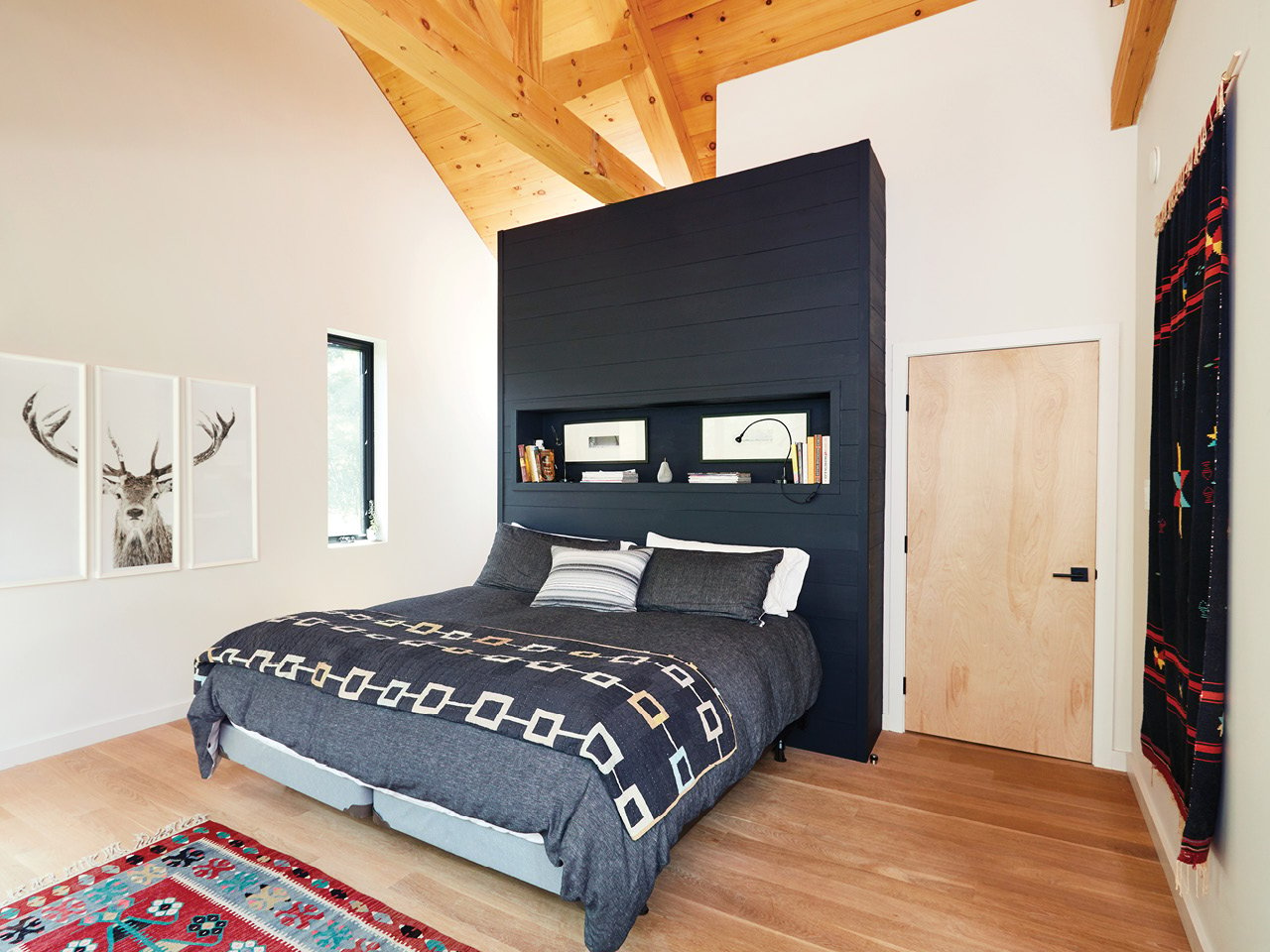 The main-floor master bedroom is adjacent to the great room, as an age-in-place consideration. The rug on the master bedroom floor is a vintage Turkish Kilim.

The master bedroom sits adjacent to the main-floor great room (“having the bedroom and living on one floor provides an option for aging in place,” says Mansikka). The three other bedrooms, two for the boys and a spot for guests, are in the basement (beside a second entrance, with built-in ski racks). Throughout the place, the walls are dotted with Canadian art and just plain Canadiana. There’s a silkscreen of a giant pair of scissors by Toronto artist Alanna Cavanagh, maps of the surrounding Bruce Peninsula and vintage posters from Quebec ski resorts (where Mary grew up cottaging as a child). Mary and Kevin also added some budget-friendly personal touches. They framed their own photos of the Bruce Trail and Beaver Valley, and hung them near the kitchen. In the dining area, Mary cut a long strip of wallpaper, featuring a giant black quill, and hung it as though it were a scroll. 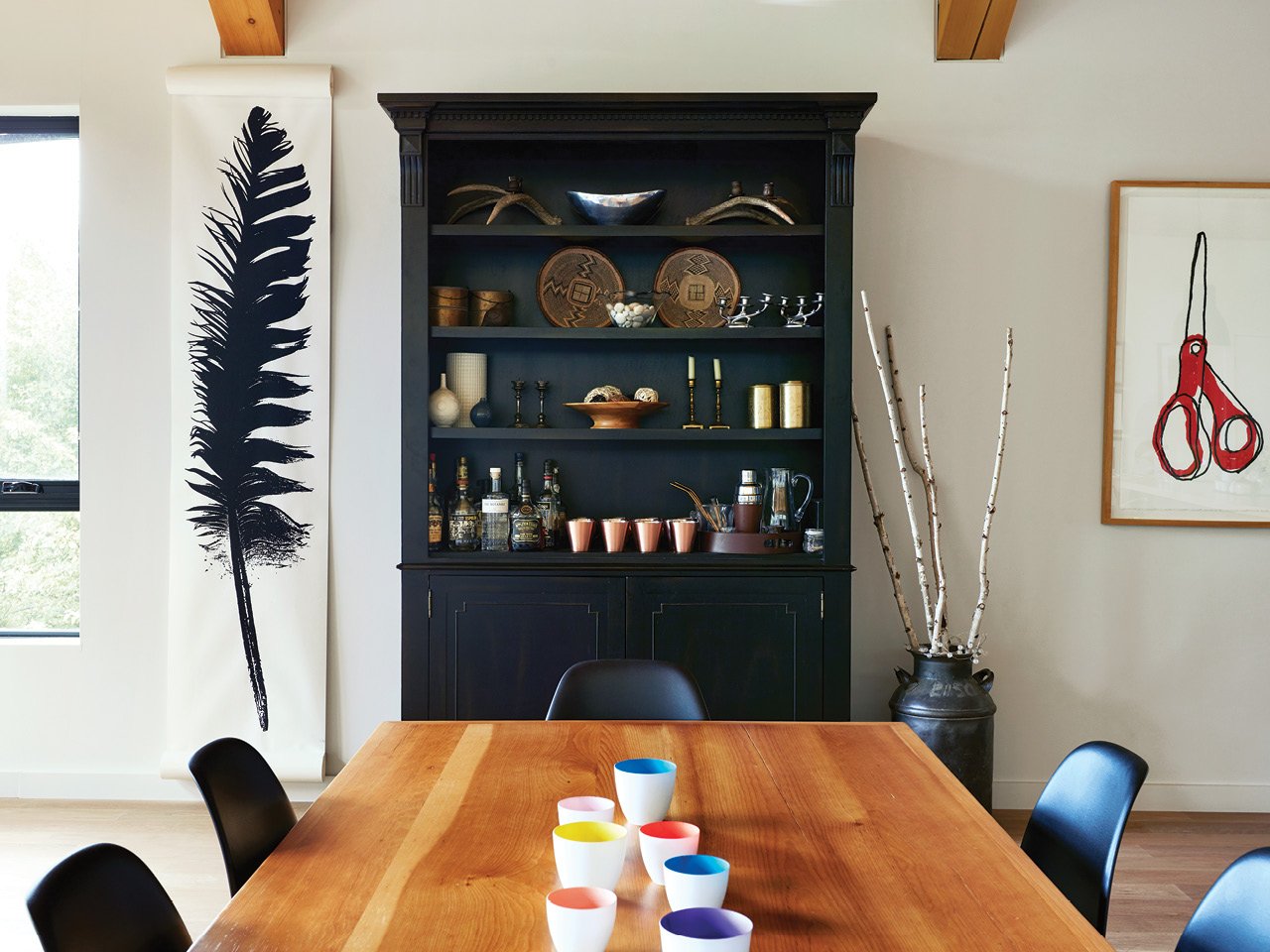 The black quill scroll (left) is a long strip of wallpaper, while the red scissors silkscreen is by Canadian artist Alanna Cavanagh.

“I imagine we’ll do another big home project one day,” says Mary. “There’s something so satisfying about looking at a blank wall and figuring out just the right thing to fill that space.”