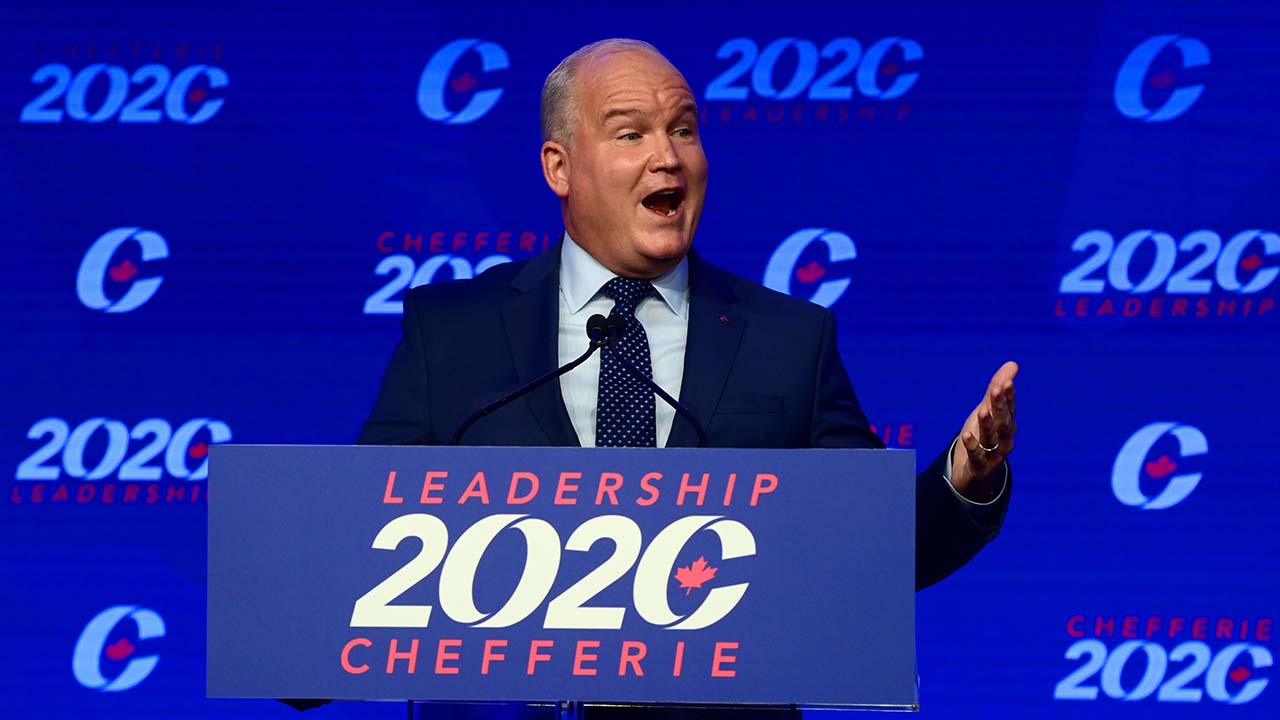 After winning the federal Conservative leadership race last week, an Ontario MP took the opportunity to introduce himself to Canadians, recognizing he isn’t exactly a household name: “My name is Erin O’Toole, I believe in this country and I’m running to serve you as prime minister.”

This was O’Toole’s second attempt at Conservative party leadership—he came in third behind Andrew Scheer and Maxime Bernier in 2017. The Conservative MP has represented the riding of Durham, Ont. since 2012, and served as the minister of veteran affairs under Stephen Harper for nine months before the 2015 election. Prior to his career in politics, O’Toole was a corporate lawyer and served in the Royal Canadian Air Force for 12 years.

Known as a moderate, O’Toole campaigned as a “true blue Conservative” throughout the leadership race, with a slogan—“take back Canada”—that mirrored “make American great again” a little too closely for some. But in his acceptance speech, O’Toole appealed directly to those who may not see themselves reflected in the party—women, new Canadians, LGBTQ+ folks and union members. Confusing matters further, days after he took the reins as leader, O’Toole stayed silent after Conservative MP Kerry-Lynne Findlay retweeted a decade-old interview of billionaire and Holocaust survivor George Soros by Chrystia Freeland (a former journalist)—a tweet that anti-hate groups say spreads “potentially dangerous anti-Semitic conspiracy theories.” (Findlay has since deleted the tweet and apologized.) Then over the weekend, O’Toole said he was committed to combating racism, but stopped short of acknowledging systemic racism in government and the RCMP. “I fight for people that wear a uniform,” he said in an appearance on Global’s West Block. “And when you use a term like ‘systemic,’ some of those people feel that you’re calling them racist.”

While O’Toole isn’t pushing for a fall election, the Liberal government will face a confidence vote after parliament returns later this month—meaning heading to the polls in 2020 isn’t out of the question.

So where does he stand on the issues that matter to Canadian women? Here, Chatelaine has compiled a rundown of his major policy plans.


O’Toole’s plans for recovery from the pandemic-induced recession include winding down emergency benefits, balancing the budget, focusing on supporting small businesses and studying ways to extend employment insurance to cover more Canadians. O’Toole’s plans also focus on families, recognizing that those with young children have been hit particularly hard. He would extend the current one-time boost to the Canada Child Benefit until the end of 2021, and make changes to the Child Care Expense deduction—doubling the existing limits, making up to $16,000 eligible for a refundable tax credit.

O’Toole’s acting director of communications, Kelsie Chiasson, told Chatelaine that he would be announcing additional measures to support women during the pandemic soon.

In his acceptance speech, O’Toole pointedly invited members of the LGBTQ+ community to join the party. But there are members of his caucus who have historically—and, very recently, in the case of Derek Sloan—made anti-LGBTQ+ comments. O’Toole’s campaign points to his “clear track record” on standing up for LGBTQ+ rights, including voting for a transgender rights bill in 2013. He’s also indicated he will march in Pride parades (if police are also invited)—unlike Andrew Scheer, who wouldn’t march—and has begun drafting policies like ending the blood donation ban on gay men (something Justin Trudeau promised to do back in June).

More on his controversial campaign slogan, “take back Canada”

While O’Toole has promised to eliminate the carbon tax, focusing policies on industrial pollution instead, he says he is committed to Canada’s Paris Agreement targets, which aim to reduce greenhouse gas emissions by 30 percent below 2005 levels by 2030. (Canada is currently not on target to meet this goal.)

While his full environmental plan has not been released, in his bid for leadership, O’Toole promised a “market-based” strategy to combat climate change, more conservation efforts (such as “the protection, enhancement and expansion of wetlands”) and “ending the practice of exempting Liberal-favoured projects [like wind turbines] from environmental rules.”

But these efforts don’t exactly square with his commitments to the energy sector, or as Marie-Danielle Smith phrased it in Maclean’s, O’Toole has indicated he “will bend himself into pretzels for the oil and gas sector.” These commitments include supporting pipelines, implementing an LNG export plan, reversing the ban on tankers in northern B.C. and supporting the mining industry. In a statement, Chiasson said under O’Toole, the government would focus on making Canadian oil “greener” by working with industry “to get to net zero emissions in the oil and gas industry through the use of technologies like electrification generated from sources such as nuclear and carbon capture.”

O’Toole describes himself as a “pro-choice Conservative” but one that, if elected, would allow his cabinet to vote freely on “matters of conscience.” He was questioned by a reporter at his first press conference as Conservative leader last week about his voting record on abortion, citing his vote for a failed 2016 bill that sought to make causing “injury or death to a pre-born child while committing or attempting to commit an offence against a pregnant woman” a crime. At the time, pro-choice groups criticized the bill as a way to open the abortion debate. In addition, making a crime against a fetus a separate offence has been used in some states to charge women who are seen as responsible for the loss of their fetuses—in a case last year, for example, a California woman suffering from addiction who had a stillbirth was charged with murder. O’Toole responded that the bill was about “safety for women” and in a statement Chiasson reiterated that it “was a public safety bill to protect pregnant women who are victims of violence.”

The Conservatives have a history of high-profile female leaders—Rona Ambrose as interim leader in 2016/2017, not to mention Canada’s only female PM, Kim Campbell. Leslyn Lewis, the only woman in the 2020 Conservative leadership race, had strong support into the second round, especially as a relatively unknown name. But representation in the party itself is lagging—while 2019 saw a record number of women elected to Parliament at 29 percent, women make up 18 percent of elected Conservative MPs. O’Toole is off to a good start—he appointed a woman as deputy leader, Candice Bergen, and chief of staff, Tausha Michaud, and will be nominating Janet Fryday-Dorey as executive director of the party, a role that is responsible for managing day-to-day party affairs.