The Clinton Affair: 5 Things We Learned from the New Monica Lewinsky/Bill Clinton Doc

A revealing new documentary, culled from 20 hours of interviews with Monica Lewinsky, finds startling connections to the #MeToo movement and today’s political climate. 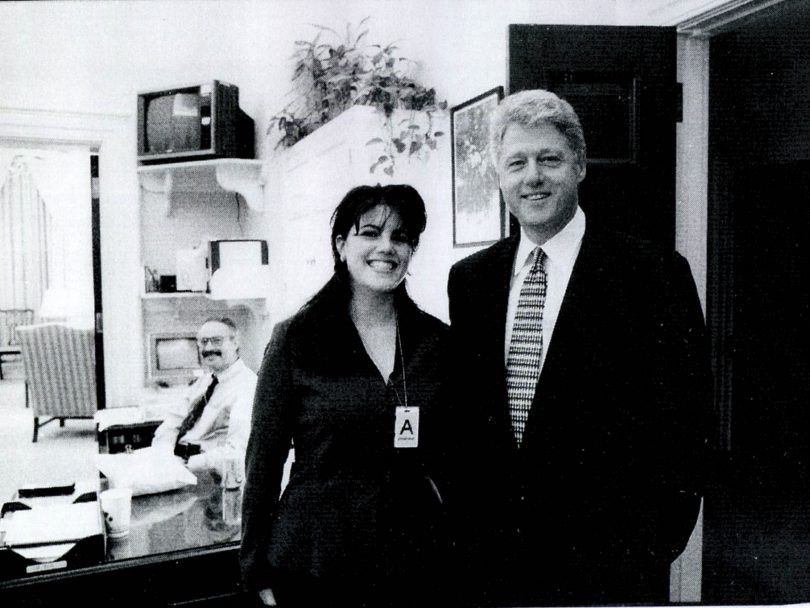 Current US politics feel like a train wreck few saw coming, but the docuseries The Clinton Affair (which premiered Sunday night on A&E and continues on Tuesday and Wednesday nights) traces the birth of modern partisan extremism to November 1992, when Bill Clinton won the presidency after 12 years of Republican rule. The six-part series from A&E also dissects Clinton’s relationship with White House intern Monica Lewinsky, who is interviewed, and shows how America’s political parties collectively cannibalized the life of a young woman to save their own asses. On the way to destroying Lewinsky’s life as she knew it, Washington created the conditions that, one could argue, ultimately led to President Donald Trump. As one interviewee notes early in the first episode, the country is still living with the consequences of this chapter. Here are the most compelling insights from the doc:

The Title is a Statement Itself

While the Clinton name carries many connotations, Monica Lewinsky’s holds just one. Since that day in 1998 when her affair with President Bill Clinton broke in the Washington Post, her past has been her identity, although in recent years she’s revealed herself to be a thoughtful, well-spoken writer and advocate for those who are bullied. Though the events that undeniably defined her life also defined the country, she’s carried far more than her fair share of the infamy. It’s telling that, despite the Lewinsky “get,” the mostly female makers of the film decided to keep her name out of the title. As Lewinsky wrote in an essay for Vanity Fair: “Bye-bye, Lewinsky scandal…I think 20 years is enough time to carry that mantle.”

One of the first points made in the documentary is the creation of what one interviewee deems the “anti-Clinton disease” after Bill Clinton’s win. “Republicans lose elections and get mad,” intones a voice over the opening sequence. “And when they’re mad, there’s payback.”

Revenge took the form of then-House Speaker Newt Gingrich, who created the new right-wing political religion of demonizing not just the Democrat’s policies, but Democrats themselves. Without that context, it’s impossible to understand the treatment of Barack Obama, America’s hostility to Hillary Clinton’s presidential bid, or even Trump. (It’s territory also covered in a recent major profile of Gingrich in The Atlantic titled “The Man Who Broke Politics.”) Other familiar faces show up to play a role in the anti-Clinton effort too: Brett Kavanaugh, the new Supreme Court justice and Kellyanne Conway, Trump’s counselor and frequent defender.

From the beginning, the documentary frames Lewinsky’s relationship with Clinton inside this far larger political arc, showing that there indeed was a “vast right-wing conspiracy” (a characterization by Hillary Clinton, which she was widely mocked for) to take down Clinton. That, and Clinton’s own arrogant carelessness, set up the environment for his impeachment and made Lewinsky the one woman whose affair almost took down a president — and then the fall-woman for everyone else’s behavior.

Just as foundational to the hatred of the Clintons was the First Lady and her demand for more power. Thus, the intense sexism of the era first visited itself on Hillary. The right-wing magazine the American Spectator called her Bill’s “big mamma” and ran a cartoon of her on a broomstick. “Saint or Sinner?” asked a Newsweek cover. Protesters against the Clinton administration’s health care proposal held signs reading “Heil Hillary” and “Hillary, why take the bus? Fly yo broom.” (This treatment, it points out, led to a chilly relationship with the press that damaged the rest of her political career.)

Bill Clinton’s first public accuser of sexual harassment, Paula Jones, was routinely derided by late-night shows for her nose, hair and clothing. The Washington Post called her “Mount Bimbo,” and another Newsweek cover asked, with apparent sincerity, “Should She Be Heard?”

As for Lewinsky, if you grew up in the 1990s you know her name became synonymous with stalker and slut. The attacks were relentless and vile. Cartoonists drew her taking questions from journalists who held penises for microphones and showed her with her cheeks bursting with — something — under the caption: “Monica withholding evidence.” Bill Maher, Joan Rivers, John Stewart, Jay Leno, David Letterman, Michael Moore — all slut-shamed her for laughs.

There Was No #BelieveWomen Then

The series also features interviews with women who describe non-consensual encounters with Clinton. The accusers — Paula Jones, Kathleen Willey and Juanita Broaddrick, who allege sexual harassment, and, in the case of the latter, rape — explain that they were the originals of the current #MeToo reckoning, speaking out about how they’d been treated, but were ignored and vilified for it. In 2016, they came out in support of Trump, appearing at press conferences with him and painting Clinton as the sexual predator. None appear to see any irony given the many allegations against Trump. But their interviews in the documentary suggest that had they been believed by more people at the time, they might not have turned to Trump as a champion. (It’s worth noting that Lewinsky has used her platform on Twitter to ask that their voices be listened to.)

Lewinsky Comes off as Remarkably Decent

Interviewed for a total of 20+ hours, Lewinsky is the only person of more than 50 interviewed who shows remorse for her personal behavior. She explores her psychology, emotions and actions unflinchingly and at length. She wrote in Vanity Fair that recording the documentary led her to “new rooms of shame” and that she would apologize to Hillary Clinton if she ever saw her. She appears entirely self-possessed, and it’s easy to root for her, really. But she also has the benefit of being the only one to speak first-hand of the affair — Bill Clinton, of course, is not interviewed.

Prosecutors who forced Lewinsky to detail the minutia of every sex act in a manner that was destined to go public considered themselves eminently fair. (Ken Starr, former independent counsel whose investigation of the affair led to Clinton’s impeachment and near-removal from office, himself squarely blamed Lewinsky and her refusal to cooperate with the FBI for “the horror that the nation went through for eight months,” as if no one else could possibly share culpability. He’s also said he won’t apologize to her). Clinton’s attorney, looking back, felt similarly satisfied with his conduct. Bill Clinton has said in a recent interview that his public apologies at the time should suffice as personal ones to Lewinsky. Only one person interviewed — Jennifer Palmieri, a former deputy White House press secretary who’d worked with Lewinsky at the White House — said she felt sorry for how Lewinsky had been treated by the country, and has told Lewinsky that to her face.

Given the compounding scandals of the Trump administration, it’s interesting how little it can take, in the right political climate, to impeach a president — and then how little impact that impeachment can have (Impeachment is the process of leveling formal charges against a government official, but does not necessarily removal from office.) Clinton survived and continued to lead the nation; his supporters — stop me if you’ve heard this one — figured he was lying but didn’t care. The GOP flourished with its new brand of take-no-prisoners politics. Then there’s Lewinsky, who became the metaphor for everyone else’s behaviors and prejudices, who’s chosen to spend her time lately reflecting publicly on what happened and why — to her life, and to America.