Why Everyone Is Talking About Alexandria Ocasio-Cortez

What you need to know about the 28-year-old who beat out an established candidate to run in this fall’s U.S. midterm elections — and what her attention-grabbing run says about Donald Trump. 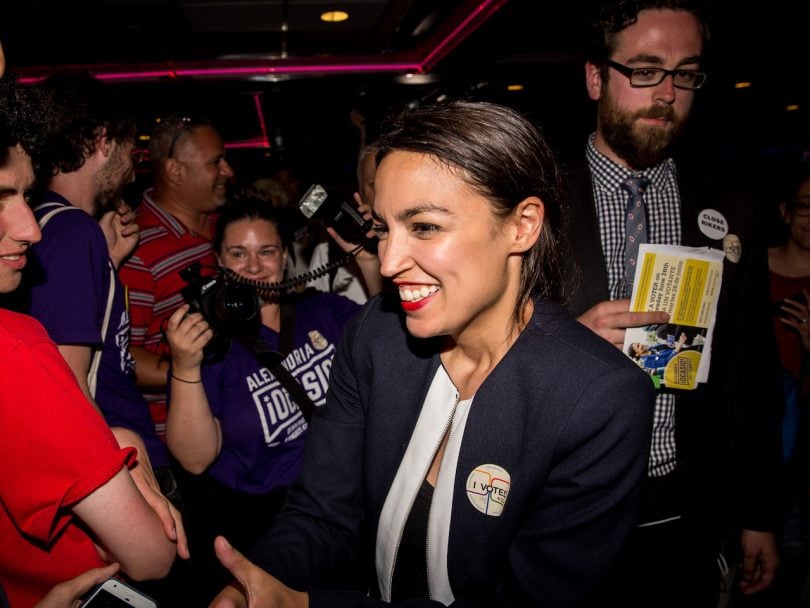 Even if you’re not a keen follower of U.S. politics, chances are you’ve seen Alexandria Ocasio-Cortez’s name in the news or on social media. On June 26, in one of the most shocking upsets of this year’s midterm elections, Ocasio-Cortez beat Joe Crowley, the No. 4 ranking Democrat in the U.S. House of Representatives, to become the Democratic candidate for New York’s 14th district. It’s a story that has much to say about the progressive left, the rise of women and a possible backlash against U.S. president Donald Trump. Here’s everything you need to know about the left’s new rising star.

Who is Alexandria Ocasio-Cortez?

The 28-year-old was born in the Bronx to a working-class family and earned degrees in economics and international relations from Boston University. She’s been a waitress and an organizer (as her campaign video explains), and she ran a doggedly grassroots campaign — think ceaseless door-knocking, combined with Spanish-language campaign posters that resemble ads for a retro indie film, a swag shop, and a Twitter feed that quotes Cardi B. Ocasio-Cortez is building a reputation for her straight-shooting, utterly composed and convincing style (“I smoked this race,” she told The New Yorker. “I dominated.”). The district she won covers the Bronx and Queens and is deeply, unequivocally Democrat, meaning she’s all but guaranteed to take her seat in Congress after the general election in November, which would make her the youngest woman ever elected to Congress.

What does her win say about the Democratic party?

The party that put Hillary Clinton at the top of the ticket just two years ago has since changed dramatically, and Ocasio-Cortez is proof. She’s not just progressive, she’s a democratic socialist — a term applied to candidates with strong far-left credentials in the vein of a Bernie Sanders. She campaigned on Canada-style universal government health care, abolishing Immigration and Customs Enforcement (or ICE, the deportation arm of the Department of Homeland Security that’s been rounding up and deporting illegal immigrants), guaranteed federal jobs for everyone and tuition-free public college. And she’s not alone. Other Democrats taking these kinds of stances include presidential hopefuls Elizabeth Warren, Cory Booker and Kamala Harris. (Side note: Perhaps the biggest story of these elections is the wave of women candidates. Women are running for office in record numbers this year (in some cases the numbers have doubled). And as of early August, they had won an incredible 65 percent of all decided Democratic primaries.)

What’s at stake in the midterm elections? Remind me how they work again?

The U.S. holds elections every two years for seats in both the Senate and the House of Representatives, and every four years for the presidency. In midterm elections, one-third of the Senate seats and all of the seats in the House are up for grabs. This time, the election is widely viewed as a referendum on Donald Trump, and it could catapult the Democrats from minority status in both the House and the Senate to the majority. If that happens, it will be extremely hard for the Trump administration to turn its agenda into law. Most political observers are skeptical that the Democrats will take back the entire Congress, but many think Republicans in the House of Representatives are in trouble. And if candidates with Ocasio-Cortez-style progressive views take up enough seats, they could change the political direction of not just the Democratic Party, but the nation. That prospect has turned Ocasio-Cortez into a symbol of an anti-Trump future.

How is the U.S. right reacting?

Ocasio-Cortez’s stardom isn’t just consequential to the left, it’s also dangerous for the right. Trump shocked the world by his ability to galvanize and cement a base on the far right, and many hope Ocasio-Cortez could have the ability to do the same on the left. That makes her a target for right-wing provocateurs. Daily Wire editor Ben Shapiro offered not just to “have a real conversation with you about the issues” and “really probe your belief system” (ew), but to donate US$10,000 to her campaign to do it. Her response: “Just like catcalling, I don’t owe a response to unsolicited requests from men with bad intentions,” she tweeted. “And also like catcalling, for some reason they feel entitled to one.”

So what does all this mean for Trump?

If the Republican party is hit with major losses in the midterms, it could spell trouble for Trump’s already underway re-election campaign. Polls suggest that independent voters aren’t keen on his approach to Russia, the way he separated parents from children at the border or his ongoing game of footsie with white nationalists.

Meanwhile, an energized Democratic base could spell trouble of a different kind. After winning her own primary, Ocasio-Cortez has been on the road, travelling to Hawaii, Michigan, Louisiana, Kansas and Missouri, supporting the campaigns of other progressive candidates and endeavouring to inspire a national movement. She’s betting that not only can her kind of politics bring the Democratic base to the voting booth, but it can inspire both independents and those who may never have voted before. There’s been a good dose of national media skepticism (perhaps even sexism?) over Ocasio-Cortez’s bold political goals, but she remains nonplussed. “I’ve been told my whole life I’m not up to snuff,” reads a recent tweet. “Folks always doubt my worthiness until I get it done.”