How COVID-19 Has Changed The World Of Online Dating

For many among the lovelorn, a global pandemic was not enough to shut down the pursuit of partnership—it was just enough to change the rules. 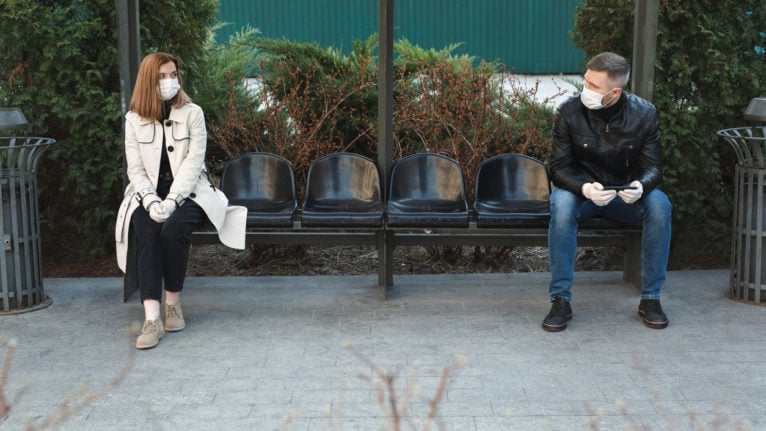 At the time, March 14, 2020 seemed like an inauspicious day. In Ontario, it was when the province’s total reported cases of COVID-19 surpassed 100. Prince Edward Island, Saskatchewan, and Newfoundland all announced their first cases on the 14th. In Quebec, Premier Francois Legault announced a 10-day public health emergency, while national Foreign Affairs Minister François-Philippe Champagne urged all Canadians abroad to come home as soon as possible.

In my Toronto apartment that Saturday afternoon, I found myself settling in with a live-in boyfriend. We had met online, and were no closer to discussing cohabitation in March than we were on New Year’s Eve, when we first met in person. But on March 14, instead of meeting up at a movie theatre—as originally planned—I met him in the lobby of my apartment building, where he arrived with a packed duffle bag, ready to ride out a co-isolation period of indeterminate length in my one-bedroom apartment. My expectation that this would only last a few days almost immediately gave way to the knowledge that expectations were no longer a real thing—I lost my job, restaurants closed and life as we all knew if effectively came to an end.

Of all the things forever altered by COVID-19, often in unexpected ways, our love lives—whatever form they may have taken at the beginning of the outbreak—might have initially taken a backseat to more immediate concerns about health, food, employment and housing. But there is no denying the pandemic has changed the way Canadians approach dating. Casual dating initially became verboten, if not impossible, as bars, restaurants and movie theatres closed. Casual partnerships—mine included—accelerated, as recommended isolation measures forced a choice between not, er, touching anyone for an undetermined stretch of time, or deciding if you actually like someone enough to live with them. Casual sex, meanwhile, was not a thing—or, at least, it wasn’t supposed to be.

Dating during COVID has presented a new set of expectations and conversations for those meeting IRL for the first time, even if physical intimacy isn’t a given: questions about physical boundaries, social-distancing status and the size of one’s social bubbles and requests to be tested before any sexual activity is initiated. For many among the lovelorn, a global pandemic was not enough to shut down the pursuit of partnership—it was just enough to change the rules.

Emma, a 32-year-old design student in Toronto, had just re-entered the dating arena in early 2020, having signed up for a few dating apps in January. Her last long-term relationship had ended eight months ago and she was finally ready to get back in the game. She had gone on one date with Chris, a retail employee also from Toronto, that had ended in sex, and had plans to see him on March 17, a day after widespread lockdown measures were imposed; they cancelled that date, but planned to meet up once things seemed safer. “We didn’t know how serious it was, or how long it was going to be. At first we thought, ‘Oh, this might just be a couple of weeks,’” she says.

But as the pandemic intensified, the relationship was effectively frozen in place. The two would stay up late chatting, watching Netflix series at the same time as one another, and “attending” virtual concerts together. But despite the digital intimacy, Emma began feeling anxious about the dynamic, saying she wasn’t sure if Chris was continuing to talk to her out of interest or lockdown boredom. “I felt crazy even worrying about it,” she says, “because we’d only hung out once. But we’d been talking the whole time.”

Two months later, they scheduled a date, meeting on a warm May evening at a west-end park in the city. They both brought a few tall cans, “park beers” being the COVID-era version of meeting at a bar. Emma says the two were open with each other about how they’d been isolating, when and how they’d been out in public, and who they’d each allowed into their personal bubbles. But she still felt he was reluctant to be close to her—in spite of the fact that they’d already been physically intimate. “I wasn’t sure if it was because he wasn’t into it,” she said, “or because he was worried about the virus.” The two did share a few goodnight kisses when parting ways. But that, Emma says, was that: Chris stopped texting not long after. She’s frustrated at having misinterpreted his level of interest, but also at having to start from scratch. She and Chris had already jumped the hurdle of physical intimacy, which, during COVID, is potentially insurmountable with someone completely new.

Emma’s relationship with Chris has strong echoes of how dating often was in The Before Times—one good date, interminable texting, one bad date, ghosting—but also underlines a more specific aggravation of dating during COVID. For those who started out single in March, developing intimacy with another person is (or, is supposed to be) a strictly online-only pursuit. Technically, Emma and Chris broke the big rule of pandemic dating: they made physical contact which, despite their mutual disclosure of isolation practises and prior relations, has been widely discouraged by health officials. In July, Canada’s Chief Public Health Officer Dr. Theresa Tam suggested that “starting virtually,” encouraging “singular dating or smaller numbers” and calling sexual contact in the COVID era a “serious social contract;” two months later, in September, she gave Canadians more pointed sex advice, saying that self-pleasure was the safest route but, if sex was on the table, people ought to consider doing it while wearing a mask.

For some, the dating limitations imposed by COVID have led to a reassessment of romantic priorities. Melissa, 45, lives in Montreal, and has been divorced for eight years. Close to the outset of the pandemic, she deleted all her dating apps—she was on Bumble, Tinder, Plenty of Fish and eHarmony—saying she’s using the time provided by the casual-dating obstacles brought on by COVID to refocus her romantic priorities.

“This is a time for me to think about what I really want,” she says. “Bed buddies can happen any old time. I want a real relationship.”

Melissa says she’s maintained contact with two men with whom she exchanged numbers prior to the pandemic, and has been on two in-person dates during COVID that led nowhere. “I wear my heart on my sleeve,” she says. “I don’t jump into relationships fast, but I feel things very quickly. And if you’re telling me all the right things, I’ll soak it up. During the pandemic, I find I’m soaking it up less. I’m more particular now. And I think this is because I have more time to sit and think about what will suit me in life.”

For others, the distance enforced by COVID-19 lockdown measures has led to unexpectedly high levels of intimacy and affection—even (or, maybe, especially) without that physical touch. Sam, 28, and Frances, 26, met in New York City in the summer of 2019, and started a long-distance relationship shortly afterwards: Sam lives in Toronto and Frances lives in Brooklyn. Before the pandemic, the two were visiting one another once a month—something that’s no longer an option. Given the severity of the pandemic in the United States, they also aren’t sure when they’ll be able to see each other again.

Despite this the couple says they’re closer than ever.

“Quarantine has just really intensified a lot of trauma and emotion, and I feel like Sam and I have been doing a lot of really intensive work together, because we have the space to do that,” Frances says. “Normally, when we see each other, because we’re long distance, like, I would just be like, ‘Let’s go to museums! Let me show you New York!’ Or, ‘I want to see Toronto!’ But now, it’s like, ‘Hey, let’s talk about our horrifying traumas.’”

In the months since March, social bubbles have widened, distancing restrictions have lessened, and dating is becoming a bit easier: bars are once again open, museums and galleries are allowing admission, and contact tracing and increased levels of testing have led to more confidence about leaving the house.

Sam and Frances are polyamorous, and have resumed seeing other people—both have been tested for COVID-19, and have asked that other partners are, as well: “The risk of seeing somebody else is extremely different in our respective cities,” Sam says, adding that the work the two have done in terms of becoming vulnerable to one another—and in turn strengthening their relationship to one another—has only increased the trust they have with one another when it comes to meeting new partners.

My live-in partner moved out 16 days after we began our co-isolation experiment, but we continued to function as a bubble, travelling only between each other’s apartments, until the weather warmed. At the time, we—like Sam and Frances—resumed previously established patterns of non-monogamy. Though even with partnerships that had been established before the pandemic hit, and then put on hold, this was a bit stop-and-start: some wanted to maintain physical distance, while others required assurance that we’d been bubbling responsibly. And any new partners, at time of writing, have been vetted—not by one another, but by the COVID test’s long nasal swab.

Admittedly, for me, it was a bumpy transition: moving from codependency to a drastically reduced level of contact, physical and otherwise, at times felt like loss, even though it was a (mostly welcome) return to form. Now, though, the partnership is underlaid by a foundation of intimacy that, were it not for COVID, may not have otherwise been built, or at least not so quickly. In that, there’s some solace: While the pandemic has upended almost all elements of contemporary life, the desire for fulfilling, enriching human connection, physical or otherwise, remains unimpeded, if not wildly more important than ever. Even if, sometimes, we have to satisfy that desire on Zoom.