She was a difficult woman, and I feared that looking like her would make me one, too. Then I learned something about her past that changed everything. 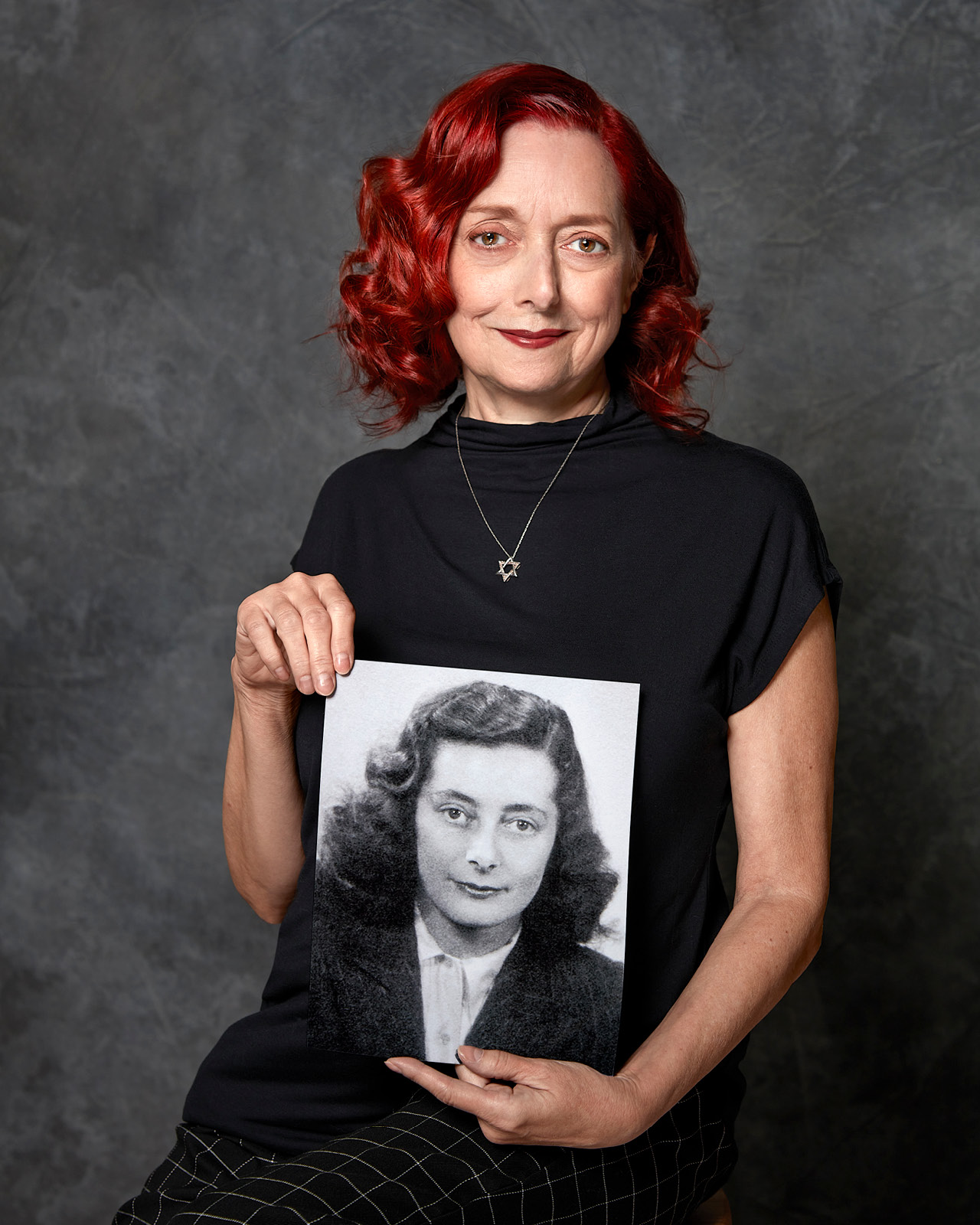 The author holding a photo of her mother from 1948. (Photo: Christie Vuong. Makeup and hair: Ronnie Tremblay.)

Ever since I can remember, everyone—family, friends, complete strangers—commented on how much I looked like my mother. And it’s true. We both had the same self-conscious smile, wavy dark hair, large hazel-brown eyes and slim build.

My mother, Joanna, was shapely, with killer legs and a patrician profile. But she was also a tightly wound woman, easily angered and riddled with neuroses. She’d married my father after they both immigrated to Canada from Poland following World War II. It was a tempestuous marriage, with heated screaming matches that often ended with my mother in tears and my father retreating to his basement workshop. The day after, she would wander the house wrapped in a mantle of gloom, or bang pots and pans in the kitchen. My father and I walked on eggshells.

Although Joanna had trained to be a concert pianist, the war had destroyed her family and ruptured her dreams. As a child, I knew only small bits and pieces of her life, and I was discouraged from prying. In Canada, she was a suburban housewife, dependent on her husband, cooking our meals and cleaning our home. My father, Andrew, was a hard-working, amiable man who had a way with small appliances and animals. He, too, had endured the war and earned a European law degree, which was useless in Canada, so he worked his way up from an assembly line to become an electrical engineer. When my parents fought, he growled menacingly at Joanna’s accusations—which were often of anti-Semitism—but invariably backed down. I dismissed these accusations as baseless, another reason not to be like her.

As their daughter, it was my job to keep misery at bay, so I worked hard to get good marks in school, practise piano, say my prayers to Jesus in Polish and go to church. My misdemeanours were limited to sneaking the odd cigarette and trying on drugstore makeup. When my parents fought, I hid in my room, weeping into my blanket. I swore I would never marry and would never be like my mother.

It was an uphill battle. I was a spindly wisp of a child, with skinny legs and protruding ribs. How I wished for plump shoulders and rounded calves. “I was the exact same when I was young,” Joanna would crow. “You’re just like me.”

She was right, as hard as I fought it. Most of what I knew about beauty and fashion, I had learned from my mother. She had me moisturizing before I wore a bra. Sometimes we’d drive into Toronto from our home in Oakville, Ont., and have open-face sandwiches at the Café de la Paix at the Colonnade or the Coffee Mill. We’d stroll through Holt Renfrew, admiring tie-necked crepe de Chine blouses in tiny prints, smart A-line skirts and sleek V-neck georgette sheaths. At home, my mother would whip up exact replicas on our ancient New Williams treadle sewing machine.

Soon, I mastered the New Williams and could churn out gaudy and gauzy peasant blouses, swirling paisley maxi-skirts, wrap blouses and halter tops. My specialty was denim vests, which I embroidered lavishly with whimsical folk art. I crocheted cloche hats with enormous flowers, and funky ponchos with long tassels. In other words, the sartorial antithesis to my mom’s quiet elegance. Bell-bottoms were au courant, and I made mine tight to the knee, where they flared and dragged fashionably behind my purple platform shoes. “You’re not wearing that to school, are you?” Joanna would berate me, clad in her favourite ecru satiny blouse and beige, knee-length pencil skirt.

The next line of defence was my hair. It was coloured, feathered, chopped, scrunched, layered, teased and tortured to ensure it wouldn’t resemble my mother’s wavy dark bob. Then came the makeup. Peacock blue paint-by-number eyeshadow and fuchsia lip gloss, of which my mother heartily disapproved. “Look natural,” she scolded me. I waved at her with long red talons. “I’ll look natural when I’m dead!” I said. 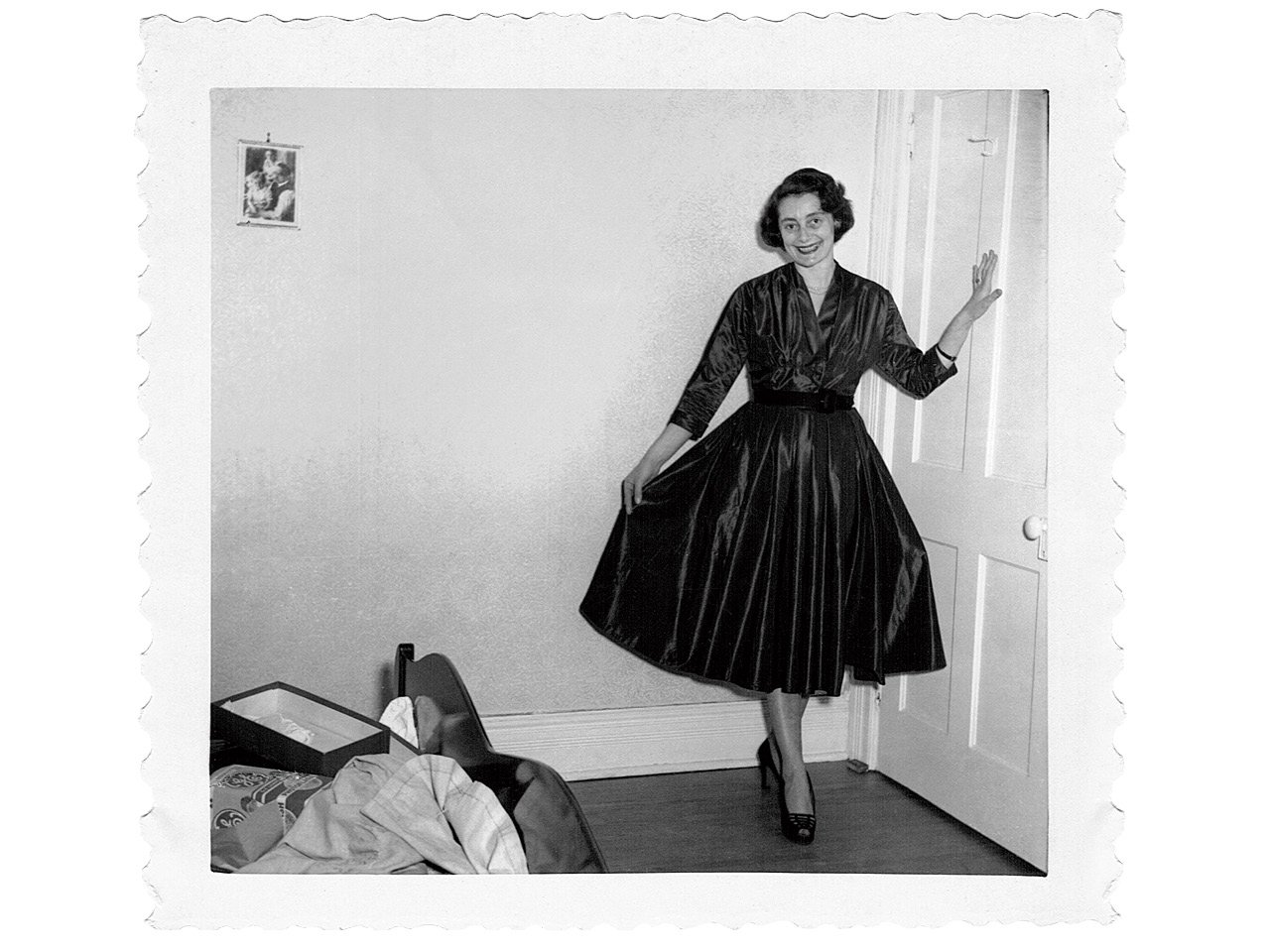 Even though our household could shake with Joanna’s tantrums and rages, there were good times. We laughed often, usually at ourselves—her inability to pronounce “th” or my stumbling over a Polish tongue twister. My oversalted babka that even the squirrels rejected. We’d blast an impassioned tango on the stereo and stalk around the living room. But later, one wrong word from my father would spark hostilities, and I would fear for my future.

I had to get out. I had to find my own identity. At age 25, I hennaed my hair burgundy and drove my 1972 Dodge Dart to an apartment in downtown Toronto. At last! The Eaton Centre was only 10 minutes away, packed with fashion crimes waiting to be committed.

Once I was gone, my parents stayed together for nine more years. In 1990, my mother left my father. One day while I was visiting my dad, he asked me to explain an affidavit for financial support that had been delivered to him via courier. It itemized various charges my mother had made against him. Item number 14 jumped out at me: My mother stated that she had been born into the Jewish faith, and even though she had converted to Catholicism, my father had constantly denigrated her Jewish origins. My hands shook as I read and reread the document. How had I not known? My mother was a Jew and a Holocaust survivor. For 40 years, she’d kept that fact bottled up inside.

Suddenly, my stomach sagged and my mouth went dry. The pieces fell into place. What horrors had she been through? No wonder she’d been simmering with rage all this time. And how I’d coldly dismissed her moods as hysterics. I had resented her instability, feared it, without trying to understand what caused it. What an ingrate I was.

I quickly realized that if my mother was Jewish, according to millennia-old Jewish law, so was I. From their separate perches in Oakville, my parents vehemently denied it. I’d had every Catholic sacrament of initiation decreed by the Vatican. I’d even met Pope John Paul II, who was Polish. I couldn’t possibly be Jewish. It was the first thing they’d agreed on in years.

But I was Jewish, and so was my mother. Slowly, her story came out. Her name wasn’t even Joanna. She’d been born Dorota Milstein, the only child of two assimilated Jews, Maurycy Milstein and Bronislawa Dawidowicz, in Częstochowa, Poland. In 1939, she was 20 years old, and war hovered in the air. Dorota caught the last civilian train from Warsaw to be with her parents in Lwów, Poland (now Lviv). When the Nazis invaded in 1941, the family was forced to move to the Jewish ghetto. Every day saw a new brutality, another atrocity. Both Maurycy and Bronislawa were murdered by the Nazis.

Left on her own, Dorota worked as an enslaved labourer in the ghetto hospital and then the Janowska concentration camp, surviving typhus and bloody Nazi aktions (the German phrase for the rounding up of Jews). On June 1, 1943, she secured false papers and became Joanna Litniowska, a good Polish Catholic girl, and escaped the ghetto. She wound up in Berchtesgaden, Germany, just four kilometres from Hitler’s summer headquarters, until the French army liberated her in May 1945. I knew the rest.

Dorota/Joanna (as I came to think of her) and I would talk, wrapped in each other’s arms. We would both break down in tears, sobbing for all she had lost, her cruel past. Sometimes we just sat in silence, rocking back and forth, emotionally drained. I gently wiped her wet cheeks and told her how proud I was of her.

What brilliant madness had possessed her to live among Nazis? “They would never suspect a Jew would dare wander into their midst,” Dorota/Joanna said of her time in Berchtesgaden. “It was in the mouth of the wolf.” And yet, she carried on like normal, making friends, going dancing, doing her hair, cracking jokes. “In war, you act natural,” she shrugged. “Otherwise, you are suspicious.”

Nearly five decades after the war, my mother’s conversion to Catholicism still wasn’t good enough for my father. I tried to reason with him about this after they split. “Jews are all communists. We wanted them to assimilate, but they were too good for us,” he spat at me. I was shocked; I had never heard him speak this way before. Still legally married to my mother, he had acquired a young Polish girlfriend, an immigrant whom he had helped find a job and a place to live. She took an instant dislike to me. I was a Jew, and that was reason enough.

So if my mother had been a closet Jew, my father had been a closet anti-Semite. I became estranged from him and grew closer to my mother. Over time, she accepted that I was Jewish and even admired me for embracing my Judaism. I celebrated the Jewish holidays and read every book I could about Jewish tradition, history and, in particular, the Holocaust.

What I learned was horrific. Racked with guilt, I wanted to crawl back in time to undo all of my mother’s suffering. She had outlived the war but couldn’t un-live the anguish, burying it under layers of grit and resolve. Her pain had never stifled her love for me. I ached for the damaged woman whose life had been warped by tragedy, yet who nurtured me with every shred of her being.

My mother became my hero, my champion, my North Star. As it turned out, Dorota/Joanna was a total badass who had practically mooned Hitler during the last few years of the war. There was a Jew, just four kilometres away from his summer headquarters, and he had no clue. I couldn’t be prouder to look like her.

My mother passed away on May 27, 2009. Now, 12 years later, I’ve adopted a minimalist approach to beauty that I think she would be pleased with. The red nails are long gone, as is the fuchsia lip gloss. My hair is still red, but it’s long and left to its natural wave. I moisturize every day.

New cafés and restaurants have sprung up where the Café de la Paix and the Coffee Mill stood. Holt’s is still there, along with other more affordable outlets. I love to rummage through the high-end schmattes, then go down the street to pick up something that fits me and my wallet. Every now and then, I buy a blouse and realize that it’s just like something my mother would wear.

I feared looking like my mother, thinking I would somehow turn into her. But now I know I could do a lot worse.