As the first indigenous woman to compete in Olympic boxing, this middleweight knows a thing or two about a good fight. 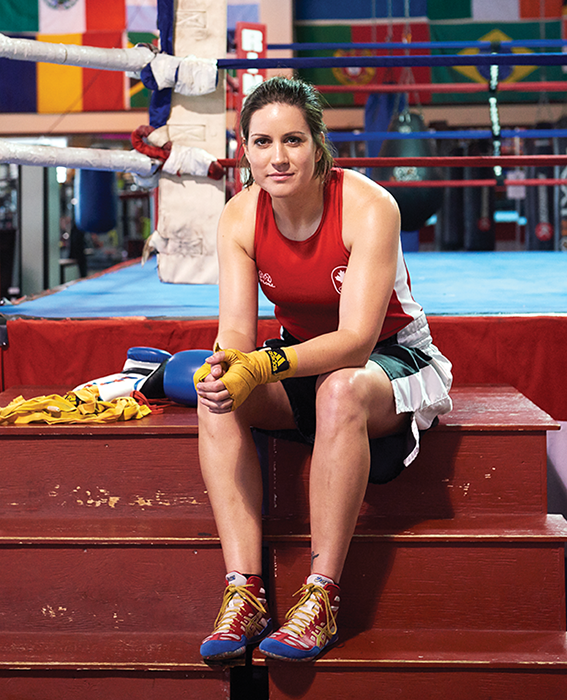 Wake up, have a coffee, punch someone — that’s been Mary Spencer’s morning routine for the past 15 years. “Sometimes I run first,” she says. “But that feels like the best way to start the day.”

Her training has paid off: The 31-year-old Ojibway athlete is a three-time world-champion boxer, a five-time Pan Am medallist and the first indigenous woman to compete in women’s boxing at the Olympics. And this month, she heads to the Canadian trials to qualify for the 2016 Summer Olympics in Rio de Janeiro. Still, to say Mary Spencer had to fight her way to the top is, yes, a pun, but also a serious understatement.

Originally from the Cape Croker First Nation, Spencer is part of a family of boxers, albeit not highly skilled ones. “When I was 10, my brother [David] came from the gym with a bloody nose, and wanted never to return,” she says. Spencer turned to her father: “Why don’t you take me? I’ll spar with the guy who beat up David!” His response? “Boxing’s not for girls.”

Related: How Mary Spencer rolls with the punches

It wasn’t until six years later, at the age of 16, that Spencer took up boxing lessons on her own and really “fell in love with the sport.” She began gruelling early morning workouts with Olympic coach Charlie Stewart in Ontario’s Windsor Amateur Boxing Club, managing to get by without a women’s change room.

“I had to spar against guys,” says Spencer, a middleweight, of the male-dominated arena. “You want to beat whoever you’re up against — a guy or a girl. It pushed me.” At 18, Spencer won her first provincial championship; she clinched her first world title a year later.

But at the 2012 Summer Olympics in London, her unshakable confidence took a hit. Though a medal favourite, Spencer lost to Li Jinzi of China in the quarter-finals — a turn of events she calls “extremely devastating.” But, reflecting on her early struggles in a traditionally men’s sport, Spencer realized she had it in her to bounce back. “Nothing really crossed my mind [back then] except how killer my workouts were,” Mary says. “But Native people know the difficulties that we all face, and our history of resilience. It’s made us tougher.”

If Spencer is successful at the Canadian qualifiers, she’ll be off to international trials in April and then, hopefully, be sporting red and white in Brazil next summer. Her roots are never far from her mind: A volunteer for five years with Motivate Canada’s GEN7 Aboriginal role-model initiative, Spencer uses her wealth of athletic experience to encourage kids to get active and set goals. As for her once-skeptical dad: “Now he’s my biggest fan!” Spencer says. “Funny how things change.”

Watch our interview with Mary Spencer from 2012: