Being true to ourselves meant radically changing our lives. 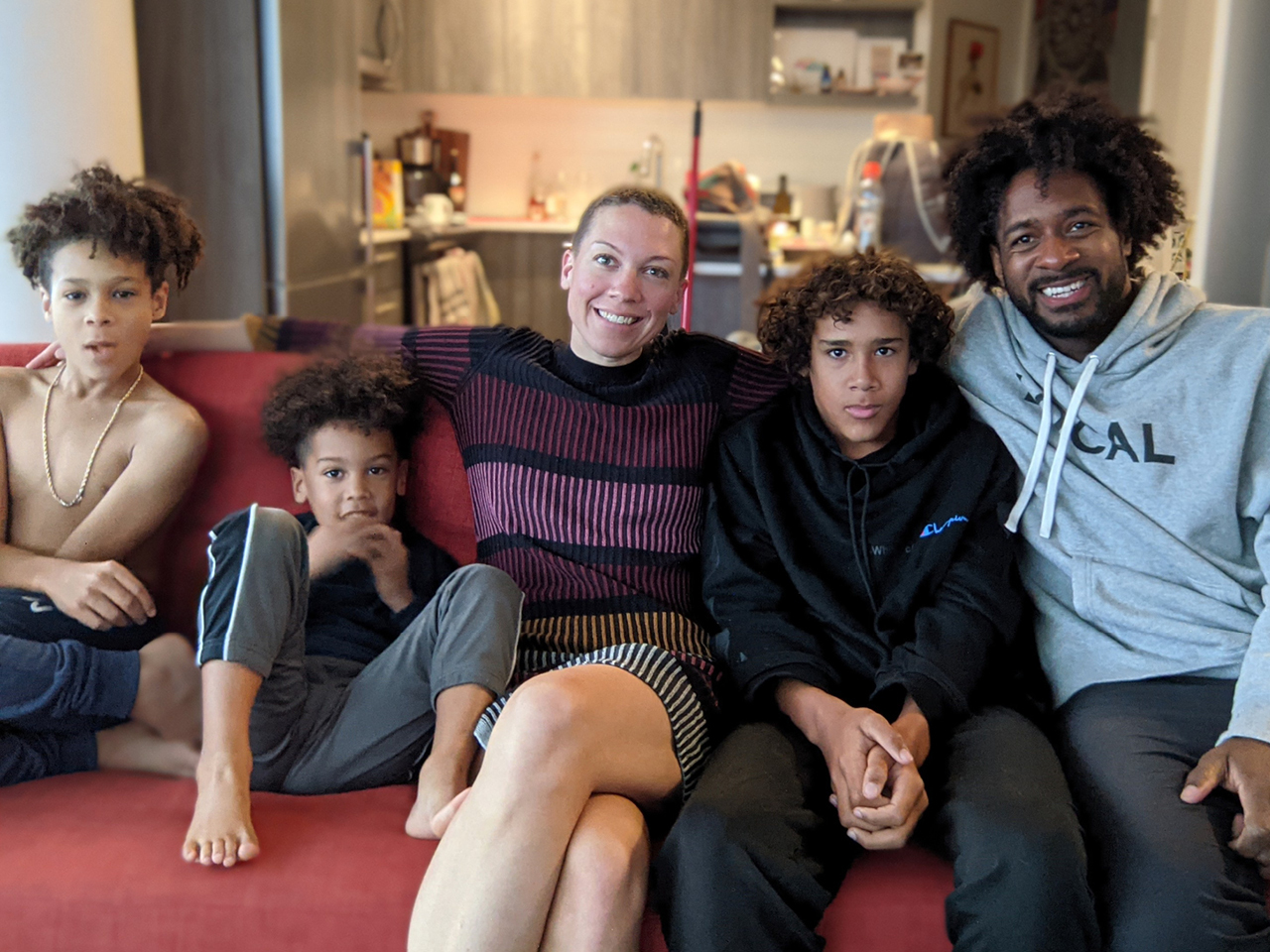 My husband and I were driving when we decided to turn our almost-perfect blended-family upside-down.

Our three boys—aged 13, 11 and 4 at the time—were in the back; we were returning home to Edmonton from a weekend spent in Regina. Wide swaths of blue Prairie sky and golden-yellow earth were whizzing by outside of our Ford Explorer’s dusty windows.

Jesse and I started talking about where we wanted to move, one of our favourite recurring conversations. In recent months, these talks had started seeming less fantastical.

Over the last few years, we’d managed to pay off lots of debt. And the pandemic—as it was for so many other employed, privileged people who got to keep working but had less stuff to spend their money on—had been good for our finances.

So this time, when we talked about the places we’d like to move to, it felt more real. At this point, we had lived together in Edmonton for seven years; I had moved there from Toronto to be with Jesse. At the time, there was no question of Jesse moving to Ontario because he had two young children from his first marriage. Living in Edmonton had put some limits on Jesse’s career—he’s an actor—but at the time it was the right thing for his family. And I quickly found work in my field at the Edmonton Journal, and later at CBC Edmonton.

For the next seven years, Jesse worked steadily in film and television (mostly in Calgary) and his speaking career took off (these gigs, thanks to the pandemic, became largely virtual). We rented a townhouse that we loved with three stories plus a basement—room for us all to have our space.

But while I loved Edmonton, its proximity to Jesse’s family, and the affordable ease of raising a family there (we had our son, Indiana, in 2016), eventually, our careers and interests started pushing us elsewhere. We felt like giving Jesse’s acting career a real chance meant leaving Edmonton. And living in a bigger market made more sense for me as a journalist, too. We were married. We were done having kids. If we stayed in Edmonton, we could pretty much predict what the next few years would look like. That was a boring prospect for both of us. But if we left? It felt like the world opening up.

Back in the car, we started listing the same set of dream cities we always brought up during these convos: Sydney, Hong Kong and Wellington, New Zealand. Those places, though, weren’t realistic for our current family dynamic.

The cities that were more realistic—and at the same time, also better for our careers—were closer to Edmonton: Toronto, Atlanta, Los Angeles and Vancouver.

But moving a blended family is complicated. We share custody of the older boys, Chile and Tripp, 50-50 with their wonderful mom, Shannon, and her partner, Lee. We spend holidays and vacations together. We’re friends and we have each other’s backs.

So the idea was that wherever Jesse, Indiana and I would move, Jesse would spend two weeks a month in Edmonton in order to not sacrifice any time with the big boys.

By the time we were driving through Saskatoon, we’d narrowed down our options to Toronto and Vancouver. But when Jesse said from behind the steering wheel, somewhere around North Battleford, “I just know that at one point in my life, I need to live by the ocean,” I looked at him and said, “Well, that settles it.”

Vancouver had a lot of film and TV work for Jesse, and a larger CBC newsroom for me. Most importantly: it was a 90-minute cheap flight away from Edmonton.

So, on that day in the car—July 4, 2021—we committed to ourselves that we’d be in Vancouver by that same day the following year. In the end, it only took us two months.

The first step to turning this dream into a reality was discussing it with Shannon, Lee and the boys. I had hoped that Shannon and Lee would be supportive, but their reaction went deeper than that. They knew that we needed to make this move, because they, too, understood us and our career aspirations and what made us happy. It wasn’t a matter of why, or how. It was, “Let’s figure this out.”

Separately, I spoke to each of my stepsons. I told them what a joy it had been living together for the past seven years. How being separated was going to be the very hardest part of this—for all of us. They didn’t seem mad, but they didn’t say much. I was worried about Indy missing his big brothers, but I don’t think he fully grasped that the move was taking us geographically further from them. He was only four, after all.

After these conversations, we moved very fast. We were excited, and also, that’s just the kind of people we are (we got engaged after 11 weeks). I told my colleagues I was leaving my staff position, and soon after, the CBC Vancouver newsroom offered me casual work.

Indy was about to start kindergarten, so it didn’t make sense to wait any longer; he might as well start in Vancouver. So on September 4, we packed up a U-Haul and headed west to our new home—an apartment we had found after an intense and competitive search. We were thrilled and excited, but there were still some logistics to iron out.

Our apartment was across the street from a new public elementary school that I had assumed Indy would attend, but it was full. The school he eventually got placed into—two weeks after school started—was one and a half kilometres away, meaning that between school and activities, he’s often walking six kilometres a day, or more.

Living in Vancouver was also even more expensive than we anticipated. Part of the reason we’d justified being able to afford the move—much higher rent for a much smaller spot, plus the remaining rent at the townhouse back home, which Jesse, Chile and Tripp now share with two roommates who help keep expenses down—was that we’d be saving $1,000 a month on full-time daycare now that Indy was in school.

But this savings has, so far, proved negligible. Like the public school system, after-school care in central Vancouver is busting at the seams, too. Four months in, we’re still on waiting lists, and paying babysitters $20 an hour for before- or after-school care, as our work schedules require. We had left a city where we had loads of extended family—and thus help with child care. In Vancouver, we have virtually no support system. I was prepared for that, and I had fully expected to hire babysitters for nights out. But the daycare situation surprised me and scheduling a roster of intermittent after-school caregivers became an extra stressor I hadn’t anticipated.

Since we’re floating expenses at two rentals, we’ve also given up weekends away and vacations for now. And although Jesse still gets his half-time with our older boys, Indiana and I only see Chile and Tripp when they’re here in Vancouver, or when we go home to Edmonton: every few weeks, but not enough as we’d like.

I also gave up having a full-time husband for a half-time husband—and I’ve realized that single-parenting for two-week stretches is hard, especially during the pandemic. I’ve worked a few full days hunched over my laptop while Indy stared at the television.

And while COVID has meant much cheaper flights to Edmonton—cheaper even than dining out at one of our favourite new restaurants in Vancouver—the virus has made it more stressful. Once, Jesse was at the airport when he found out a close contact had tested positive. Needless to say, he didn’t get on the plane (then later tested negative).

In Edmonton, we’d been constantly surrounded by our community. In Vancouver, I was more or less on my own. By December, the wave of initial visitors we’d gotten from Alberta was slowing down and I spent two weeks straight alone with my kiddo. I really missed Jesse, Chile and Tripp, and Indy missed his older, protective playmates.

But all in all, it still feels worth it.

The truth is, Jesse and I have realized we aren’t “forever home” people. And we might never be.

Moving to Vancouver has breathed new life into my veins. When I walked down Robson toward the West End for the first time, I couldn’t believe how many faces were on the sidewalks, and filling restaurants, on a Tuesday night. Jesse is invigorated by the newness of it all, the opportunities for work, and the warmer weather.

Our condo is small for a family of three that sometimes expands to five–Chile and Tripp visited for Indy’s birthday in October, and Chile returned the next month for a week. But, it looks over False Creek. I can see mountains from my balcony. I can smell the sea when I leave the lobby. I can walk in the rainforest on the weekends. My casual work at CBC Vancouver has since turned into a contract. I’m in a role I love, working on two fast-paced radio shows.

I am vibrating at how much life is happening around me. We left the car in Edmonton, and here, Indy and I get around the city on foot and by transit. He absolutely loves taking the train and the bus, and he’s a real trooper when it comes to walking (except, sometimes, after school, which is the only time he asks why we don’t have a car).

Being apart from Jesse for two-week stretches sucks. But the two weeks we are together are great. Really, really great.

We had been staying in Edmonton for our boys. But despite being content in our lives and ecstatic with the community we’d built around us, we just couldn’t stay until they were grown-up. We’d be giving up too much of ourselves in the interim.

Not everyone is made to settle down. And finding your people shouldn’t mean you have to. Home ownership isn’t possible right now, but doesn’t interest us much anyway. And while we, like most parents, put our children first in innumerable ways, I don’t believe that their comfort should always trump our happiness.

So, yeah: We did turn our lives upside-down. But our blended family is still strong as hell. It just looks different now. The very first day home to Edmonton on my Christmas break, we caught up with Shannon and Lee over mulled wine while the older boys took turns tearing through the house with Indy. The lines of communication are open. If this situation isn’t working, we’ll make adjustments. Our lease on our Vancouver apartment is for one year—as permanent as anything in this world: not permanent at all.

It’s Vancouver for now. Maybe forever. Hopefully for at least five years. But then, who knows? The kids will be older. Sydney, Hong Kong and Wellington will be back on the table.