I Moved Back In With My Dad During The Pandemic. Here’s What I Learned

Both of us had proven we could live on our own, but during lockdown we learned we didn’t need to. 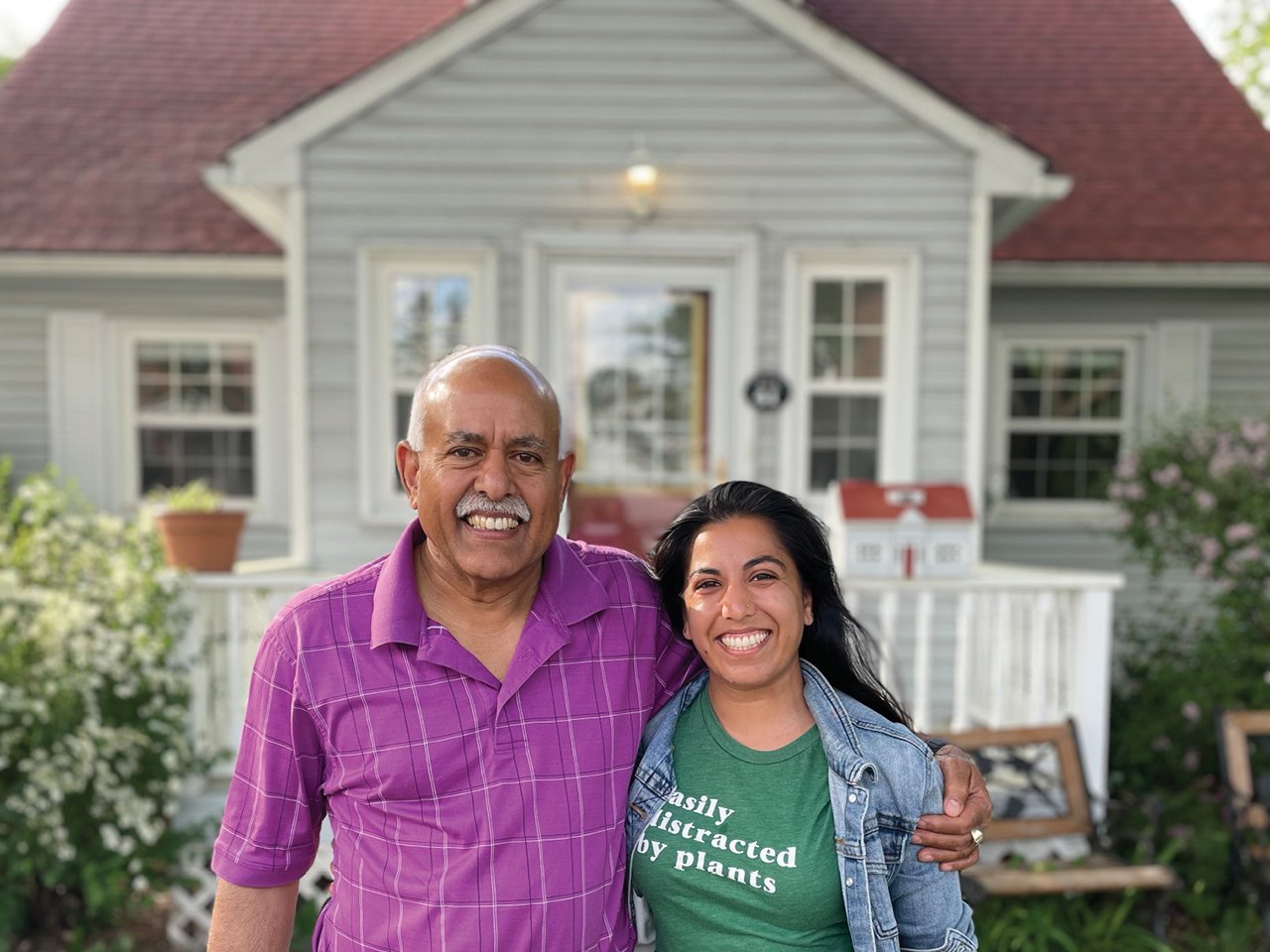 “I don’t know where things are. This is my parents’ house, not mine,” I told a friend in exasperation, digging for Tupperware in my parents’ kitchen. It was 2012 and my mum and dad had just moved from Ottawa to Toronto, where I was in graduate school and living with a roommate. I was fiercely protective over the independence I had built since I moved out on my own.

Then, my mum was diagnosed with cancer, and I moved back in with them to help out. After she recovered in 2014, my parents moved back to Ottawa and I stayed in Toronto, determined to return to the life I had paused.

My mum’s cancer eventually came back, and she passed in 2015. Since then, my dad and I started to rebuild our lives—separately. He continued to live in Ottawa, in the red-roofed house with a matching red mailbox my parents purchased right before my mum’s passing, while I remained in Toronto, eventually moving into my first apartment of my very own.

Having my own space was an immense privilege I did not take for granted. For the first time, I didn’t have to tell anyone if I was going out or discuss decor choices. I filled my rented midtown one-bedroom with framed memories, IKEA furniture and a growing family of plants to the point that every inch of the space felt like an extension of me.

By contrast, I started calling the Ottawa house my “dad’s house,” in part to normalize the loss of my mother, while also further splicing my life away from his. For the first time, I had created my own home—and I was proud of it.

Three years later, when the pandemic hit, I was thankful to live alone. My apartment was safe. Spacious. It even got a nice amount of sun. At first, being required to stay home seemed like a welcome respite, the type of time I used to intentionally carve out of my busy social calendar. But as the weeks stretched into months, my apartment, once a beacon of freedom, became confining and palpably empty. Meanwhile, I worried about my dad, whose age meant he was at risk for the virus.

While my mum and I had talked easily on the phone, sometimes multiple times a day, my dad and I were still working on calling each other “just to chat.” Our conversations often felt forced, like running through the agenda of a meeting, and the pandemic didn’t help. We were talking more often, but not saying the truth: that we were both having a hard time.

In the summer, when Ontario’s active case count came down, and restrictions loosened, I finally visited my dad in Ottawa—and stayed there. At 31, I was one of the estimated 1.5 million Canadians who moved back in with their parents during the pandemic. I knew this was an unprecedented time, but living in my dad’s house again was truly never where I thought I’d be.

I originally arrived with a small suitcase, leaving my apartment keys with a friend so she could water my plants. By September, I had subletted my place, moving out boxes of my clothes and leaving my carefully planted balcony garden to languish. Even after my subletter left, I held on to the apartment. It was a piece of hope that one day, the city life I loved might return. But in the meantime, I’d be in Ottawa with my dad.

Prior to 2020, my dad and I had never lived together, just the two of us. At his house, I was never a guest, but I also wasn’t a resident. I was somewhere in-between.

This time, I unpacked, clearing out drawers of high school t-shirts and suitcases of my mum’s saris to make room for my clothes.

Within weeks of our new arrangement, friends and relatives on FaceTime remarked that our voices sounded different, happier, now that we were together. It was true.

We had also gotten to know one another a lot better. Living together as adults, without the distraction of friends or social events, meant we witnessed each other’s lives in a way that was impossible during one or two-week visits. We started settling into a routine and getting acquainted with each other’s schedules and quirks.

For instance, no matter what’s “on the agenda” for the day, my dad will always iron and tuck in his button-down shirt. As he putters around the house, he hums the same single note tune—which is surprisingly more endearing than irritating—and admonishes himself when he drops things. “Come on buddy,” I’d hear him sigh following the occasional clunk of a utensil hitting the ground. (My dad says he wasn’t surprised by any of my quirks, but then adds, “You have a hearty laugh. Sometimes when you were on the phone, I could hear it throughout the house.”)

Each night, he made dinner, and after watching a few episodes of whatever crime miniseries we had on the go in side-by-side recliners, I cleaned up—in part, because as my dad discovered, I cannot leave dirty dishes out. He covered groceries. I paid for takeout. It wasn’t exactly an even split (I’m very lucky to have him), but it worked.

I also started letting down my guard. When I briefly started seeing someone in 2021, I ended up telling my dad way earlier than I normally would because he interrupted a Zoom date to bring me Triscuits, cheese and grapes. The boundaries we had built were fading.

Dating during a pandemic is: wearing no makeup and a Roots sweatshirt to a virtual happy hour and having your dad interrupt to bring you snacks

During the time we lived together, my dad and I witnessed the same scary headlines, but I learned he is a perpetual optimist, often repeating the fact that we had to find a way to keep living. Retired and determined to help with pandemic efforts, he volunteered to drive weekly grocery packages to those in need. He got into cooking, trying out new recipes, like lamb burgers and vegetarian enchiladas, that have since become signature dishes. And on Sundays, he organized a standing outdoor coffee date with our neighbours.

While he tried to find the silver lining, I occasionally got sucked into the dark cloud. Nearly all of our fights—and oh boy, there have been fights—revolved around COVID guidelines. He wanted to meet his buds outside for a socially-distant whiskey tasting. I worried about rising reports of variants. When indoor dining was allowed, he was ready to book a table; I wanted to hold off until there was more research on outbreaks. After actively giving each other space for years, we were more invested in each other’s lives—and I was more aware of the risks that could derail them—than ever before.

Actual footage of me and Poppa Nath: https://t.co/i3B2TvR2Tv

The pandemic brought a looming threat of mortality; specifically, the very real possibility that I could lose my dad, in a way that broke me. “I only have one parent left,” I told a friend, mid-mind spiral trying to calculate the risk associated with an outdoor celebration last summer. My voice wobbled.

My fear was directly connected to my growing appreciation for my dad and our situation. I don’t have kids. My dad is healthy and comfortably retired. I worked remotely even before it was mandated. We were already fortunate when we lived apart, and now we were even more fortunate to be able to literally be there for each other.

But it was never meant to be a permanent situation. In early 2021, with vaccines on the horizon, we both started thinking about what our future might look like. For years, he had floated the idea of downsizing and moving to Toronto, but I discouraged him, concerned that he would be lonely and become reliant on me. But living together during the pandemic, away from our family and friends, we had to turn to each other for everything from entertainment to support—and that led to more honest conversations. I learned that he wanted more adventure. He heard my concerns about leaving the comforts and community of Ottawa. And ultimately, I opened up to the idea of including, rather than compartmentalizing, him in my life.

After living together for eight months, my dad sold the Ottawa house and bought a condo in Toronto.

Both of us had proven we can live on our own, but through the pandemic, we learned we didn’t need to. Amid the multiple waves, lockdowns and many, many hours spent watching Netflix, my dad and I found our way home to each other. And in a twist of fate, we both moved back to Toronto—me back to my apartment and him to his new condo—in June.

During one of our last Sunday coffee dates in Ottawa, a neighbour asked if I would be moving home, meaning into my dad’s new place in Toronto. “Not right now,” I responded. “But really, it’s all the same.”