I Never Spoke Korean, My Mom’s First Language, As A Kid. Here’s Why I’m Learning It Now

Picking up a new language as an adult isn’t easy, and I’ve had a few false starts. But here’s what’s working—and why it’s so important to me. 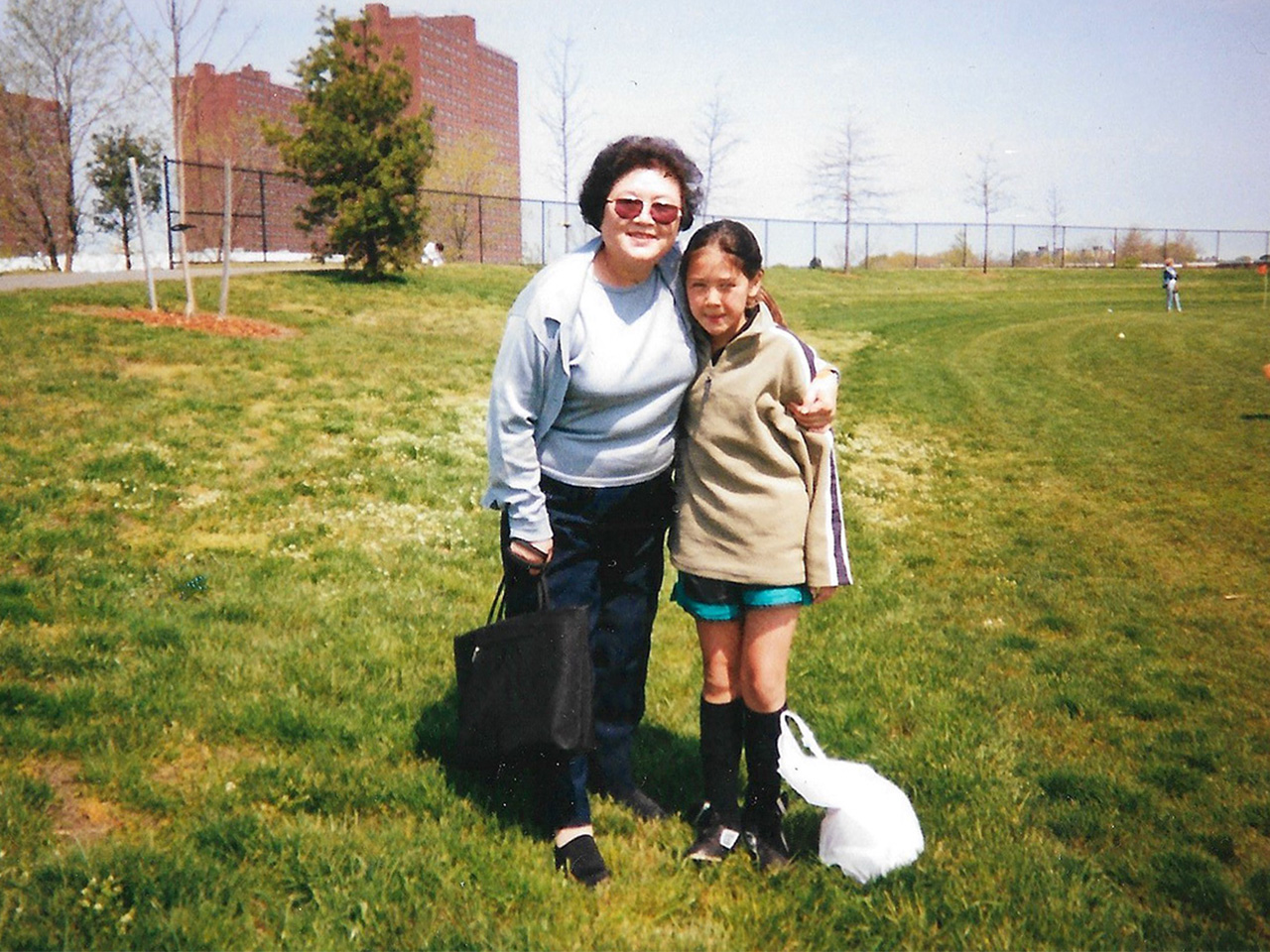 The author as a child with her grandma, Woo Ran (Image: Elie Gill)

I remember the first Korean grocery store my mom took me and my brother to. I was about six, so the shelves seemed extra tall. We followed our mom in the store, and we didn’t recognize most of what she was buying: boxes of curry mix, seaweed sheets, squid jerky, and yakult. The store was dark compared to the fluorescent hyper-lighting of the supermarket. Like any kids in a grocery store, we were captivated by the sweets, small white boxes of bubblegum balls in three flavors: orange, grape, and strawberry. Would mom buy them for us this time?

When we got to the counter, my mom would make small talk with the shop owner in Korean. I would look up from behind her legs. Like all small children, my brother and I worshipped our mom. She was beautiful, and warm, and she could do anything. The shop owner would look down at us, smiling, saying something to my mom. In this memory, and every later memory like it, the shopkeeper looks over at us with a wistfulness I’ve only started to understand. I still encounter this look today, stopping in at a Korean depanneur. It’s the way a Korean person looks at you when they know you’re of Korean descent, but you can’t speak the language. It has always made me feel the need to apologize.

I get this from people I meet, all the time. First, they ask where I’m from or remark that I look Chinese. When I explain that I’m half Korean and half white American—now Canadian, too—they ask if I speak Korean. And I have to say I don’t. It’s a situation I’ve always been meaning to correct, but the difficulty of doing so has put me off.

I had been learning Italian during the pandemic, for fun, when my partner asked me what I thought about traveling to Korea together. He knows that I’d like to visit my cousins and explore the country some day, with the ability to get around on my own. I said I’d love to, but that my Korean wasn’t good enough. I started giving him the reasons why I kept putting off learning the language, and he gave me the look he gives me when I’m making excuses not to do something, because I don’t believe in myself enough. In these moments, he thinks I’m perfectly capable, but he doesn’t push me. I switched from learning Italian to learning Korean that night. After all, being reminded of my own mortality during the pandemic has made me start a lot of things I’d been putting off.

I speak two languages besides English: Dutch, from living in Amsterdam as a child, and French, from moving to Quebec for university and staying to become naturalized. I graduated from McGill in English literature, and in my old job, I used to manage a French-speaking team of seven, so I’m confident in my abilities with language in general. But when my mom talks with her mom on the phone in Korean, I’m lost. When my grandmother hands me a red envelope of money on chuseok, Lunar New Year, I have to painstakingly repeat the Korean thank you and wishes for the year after her, making a mess of the tradition. It’s embarrassing.

And what’s worse, it’s humiliating for my mom and my grandmother. It seems like they’re being made to feel foreign in their own homes, when they have to explain traditions and phrases. They tend to rush through it. So much is lost in translation. Once, my mom tried to pour soju for me at a family dinner, and I said no thanks. She kept asking, and I kept saying no. She was offended, because in Korean culture, it’s a matter of respect to drink with someone who pours for you. But no one had ever told me. Again and again, I make my family feel wrong-footed or misunderstood, without meaning to.

My family was mocked and belittled for not speaking English when they first moved to the U.S. My grandmother can speak English fairly well, but she doesn’t like to. She seems frustrated with the language. She has often expressed a wish for me to learn Korean. Since I started to, I wrote her an email in Korean for the first time, telling her not to worry too much, that I’m doing fine, and that I love her; the sentiments she is always expressing to me.

A photo of the author as an adult (Photo: Elie Gill)

I’ve also thought more carefully about why I never learned my mother’s language. My family tried enrolling me in Korean Sunday School language lessons when I was in elementary school, but the teacher expected us to pray in class. Since my family was agnostic, this didn’t go over well, and I was allowed to drop out. For her part, my mom was working long hours. My father’s Korean was limited. He knew what to order at a Korean restaurant, but I never heard him speak Korean.

Lockdown pushed a lot of people into new and old hobbies. Language-learning has surged during the pandemic, along with gardening, reading and playing musical instruments. The booksellers at two Montreal bookstores, Moti Lieberman of Argo and Alex Nierenhausen of St. Henri Books, have said that business has improved as people go back to reading.

I took an intensive beginner’s course in Korean in university, so I was aware that I was in for a challenge—and that there were a few odds stacked against me.

Unlike Dutch and French, which share a lot with English, the grammar and sounds of Korean are not related to any language I speak. When you’re learning a language in a country where that language is everywhere, learning is easier.

I’m also not a disciplined learner; I struggle if I have to memorize tables of conjugations or lists of vocabulary, as is common practice with French.

Another disadvantage is my age: teenagers and children learn languages more easily.

The one advantage I do have is in accent. Because I’ve heard Korean my whole life, it’s easier to pronounce words the way a Korean would. To my surprise, I’ve even been told by friends that I sometimes have a Korean accent in English. It comes out in certain words, or when I’m tired, or when I’m speaking at home to those close to me. There are little words I learned growing up, like ttoki, for a rabbit, agi, for a baby, mong mong, the noise a dog makes, or halmoni, for grandmother. My little brothers call me nuna, older sister, even today.

In preparing to learn Korean, I’d looked for local classes offered through the King Sejong Institute, a local Korean school in Montreal, but was too intimidated to commit to one. I picked up a few textbooks—one with a lot of explanation, one with a variety of fun exercises, and one that was a continuation of my college course. They sat on my bookshelves, making me feel guilty. I also bought a well-reviewed travel phrasebook, and proceeded to lose it, ironically, at the library. I subscribed to popular YouTube channels and podcasts about learning Korean, and then didn’t watch or listen to them. 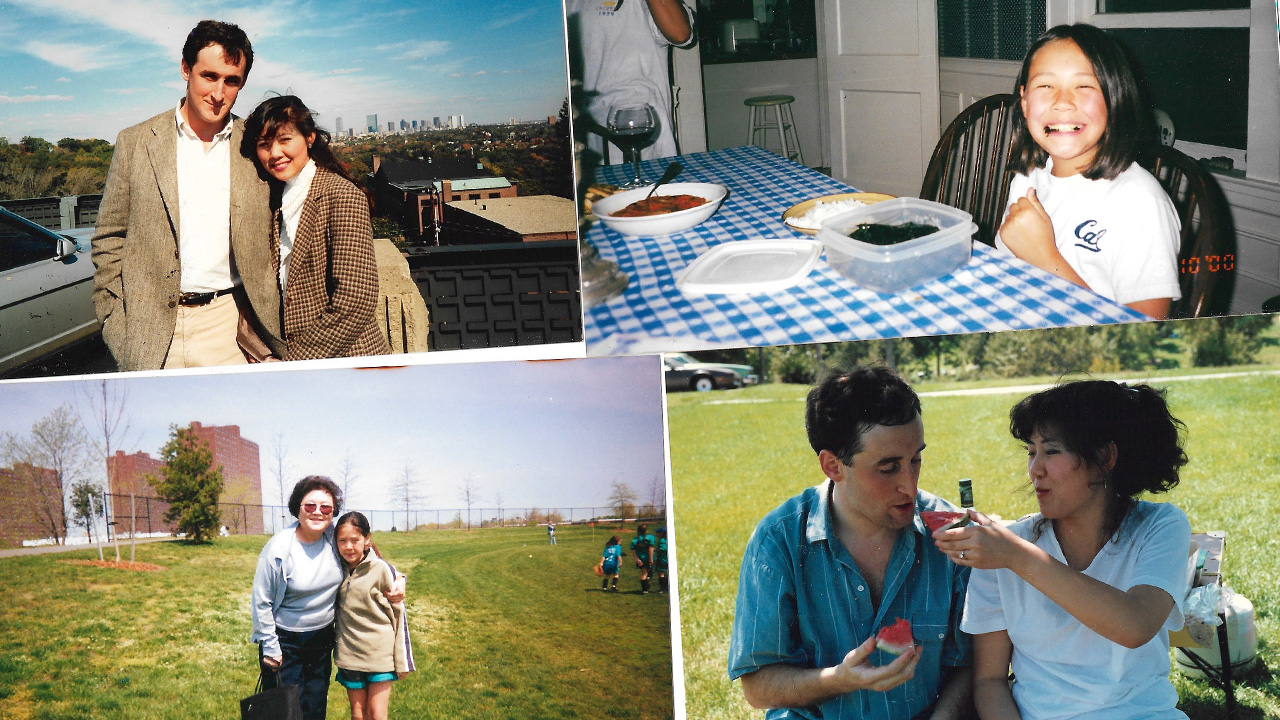 The only thing that has worked for me consistently with Korean is a language-learning app called Duolingo. Duolingo helps you build the habit of learning a little every day. I have a few friends who also use the app, so we chat about our progress and compete with one another. There are free and paid versions. I use the paid version, which allows me to skip the ads.

Duolingo has audio and written components, and even uses speech-processing technology to test your ability to pronounce words, in some languages. The good news is that Hangul, the Korean alphabet, is simple and logical, and the grammar isn’t as complicated as the grammar of German or Old English or French. I’m starting to understand why Koreans often describe English as inordinately difficult.

On the other hand, talking about numbers in Korean feels like having to scale a sheer cliff face. Instead of saying, for example, four apples, starting with the number and then the object, the order is reversed in Korean. You’d say the object, the number and then the counter, a word that denotes the object’s category, like myung, for people, shi, for time, or beol for clothing. It gets more complicated: trees, bottles, animals, and books each have their own counter. And people have two other counters, saram and boon. I don’t know yet why you’d use one rather than another. It drives me out of my mind.

I’ve been trying to reconnect with my culture in different ways, at the same time. I started following Korean writers and journalists on Twitter. I’m reading Korean novels in translation. Like practically everyone these days, I’ve started watching Korean movies and TV shows. I started cooking Korean food more often, with the help of YouTube chef Maangchi. As I get to know Korean culture better, I see more conflicts and controversies in history, politics, and current events. I like getting to this point in learning about a new culture; it’s when things start to feel as complex as they really are.

I have been asking myself how to be Korean in a way that’s not for consumption, and not based on consumption, of food, or media, or the marketplace. How does a diaspora Korean become uncommodifiable, especially in a culture that sees Asian women in terms of image, decoration, sexual access, and disposability? How do I undo the integration my family was pressured into? How do I live with our intergenerational traumas and how do I live as a Korean with the dignity my family was denied? Learning my language is just the first step.

My first memories of language are of my parents singing lullabies to me. I began to understand my father’s songs, as I learned my first language. The songs my mother sang were more beautiful. She would look down at me with such an intense love, in the moments before I fell asleep, that it was overwhelming. I wanted to show her that I loved her too, so I would copy how she moved her mouth, and the sounds she was making. Eventually, we would sing the lullabies together. I still know these songs start to finish, but only as a series of sounds. As I’m learning Korean, they’re starting to form words and phrases, as if they were emerging out of a darkness.