Krista Ference on the life of an NHL hockey wife

We are celebrating the women behind the NHL, starting with a former pro snowboarder who fell for potato-peeling defenceman, Andrew Ference. 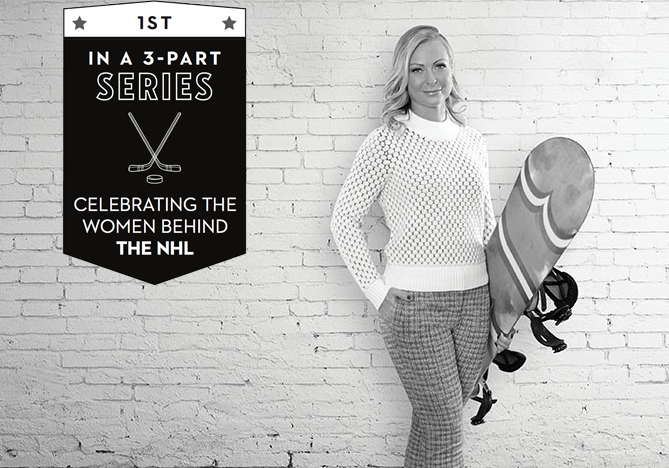 Memo to modern hockey wives: Never show up at a Stanley Cup championship game without a garbage bag. It’s a bit of wisdom that Krista Ference, 37, picked up back in 2011. Her husband, Andrew Ference, was playing defence for the Boston Bruins when the team beat the Vancouver Canucks 4–0 in game 7.

Krista and her fellow WAGs (that’s wives and girlfriends, for those who don’t read the tabloids) celebrated the win in the team locker room, where champagne and beer were spraying from every direction. One of the more seasoned spouses produced a plastic garbage bag — a place to stash their designer handbags. “She had been part of a Stanley Cup celebration before, so she knew,” says Krista. “It was just a mess.” The euphoria of that night made it one of the most memorable of her life. “I’ve only had that feeling one other time: when I won the Vans Triple Crown of Snowboarding in 1998.”

Before she married a pro athlete, Krista was one. She competed as part of the first-ever Canadian women’s snowboarding team in the late ’90s and early 2000s. A natural-born adrenaline junkie, she spent her late teens and early 20s touring the world engaged in what was still considered a sport of delinquents at the time. (“There were a lot of late nights,” she says.) In 1998, Krista was preparing to compete in Nagano (the first Olympics to include snowboarding) but got sidelined by an ankle injury and ended up sobbing her way through the opening ceremonies from her couch in Whistler, B.C. 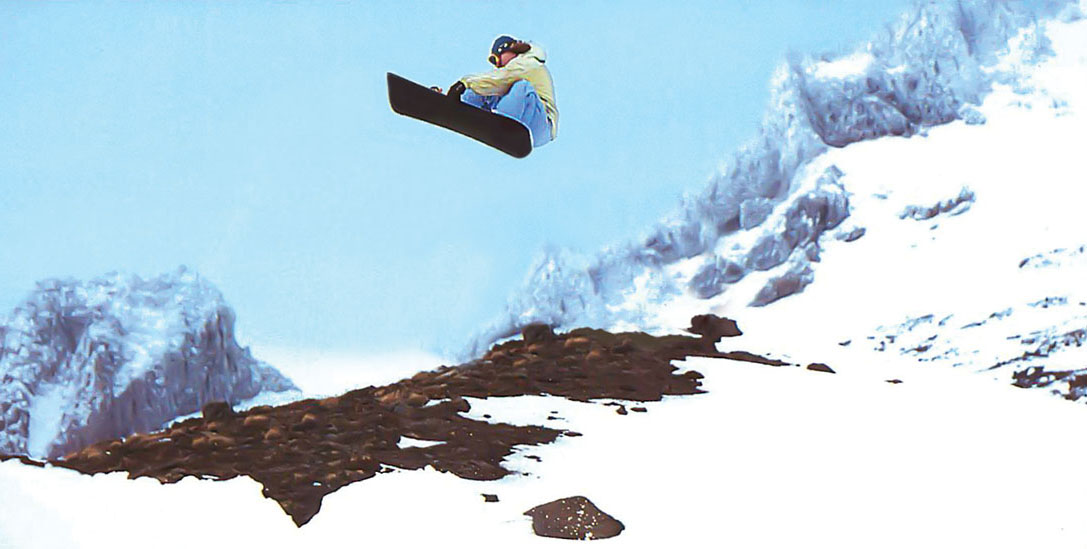 “I was heartbroken,” she says. “But I feel the experience was a turning point in terms of my ability to handle whatever situation I end up in. And, who knows, if I had gone to the Olympics, maybe I wouldn’t have met Andrew.”

That fateful meeting took place at her mom’s house in the Okanagan, B.C., in 1999. The whole family was flying in to celebrate a family wedding. Krista’s sister, Des, had befriended a handsome hockey player who she thought would be just perfect for her little sister. “I walked into my mom’s kitchen, and there was this guy sitting at the counter,” Krista recalls. “I was wearing a baseball hat and looking not so good. He said, ‘Hi,’ and I said, ‘Hi,’ and then I hightailed it out of there.” In spite of the blindsiding introduction, they ended up hanging out a lot over the weekend, bonding over a shared love of punk music more than of pucks. But what really clinched it was watching the hotshot player roll up his sleeves and help her mom peel potatoes for dinner.

Andrew returned to Pittsburgh, where he played for the Penguins, and told his best friend that he had met the woman he was going to marry. They dated long-distance for three years, even after he proposed in 2000, since Krista was still competing with the national team. “He never said, ‘Okay, you have to come and live in my city because we’re getting married,’ ” says Krista, who retired from snowboarding for good in 2004. “I never felt like my wings were being clipped, which I think is important in terms of our relationship today.” Her competitive background helps her understand where her husband is coming from. “Andrew exhausts himself being there for me and the girls, but there are certain realities of his job. When it’s game day, that’s the focus.”

The obvious perks aside — like financial freedom and sleeping next to pecs of steel — being the wife of a professional athlete comes with its challenges. There’s the gruelling schedule and long stretches of being on her own. Krista and Andrew have two young daughters now (Ava, 9, and Stella, 5), and Krista has gotten used to flying solo at Christmas concerts and birthday parties, as well as vacationing as a single parent. But that’s nothing compared with the looming threat of having her entire life uprooted with zero notice. 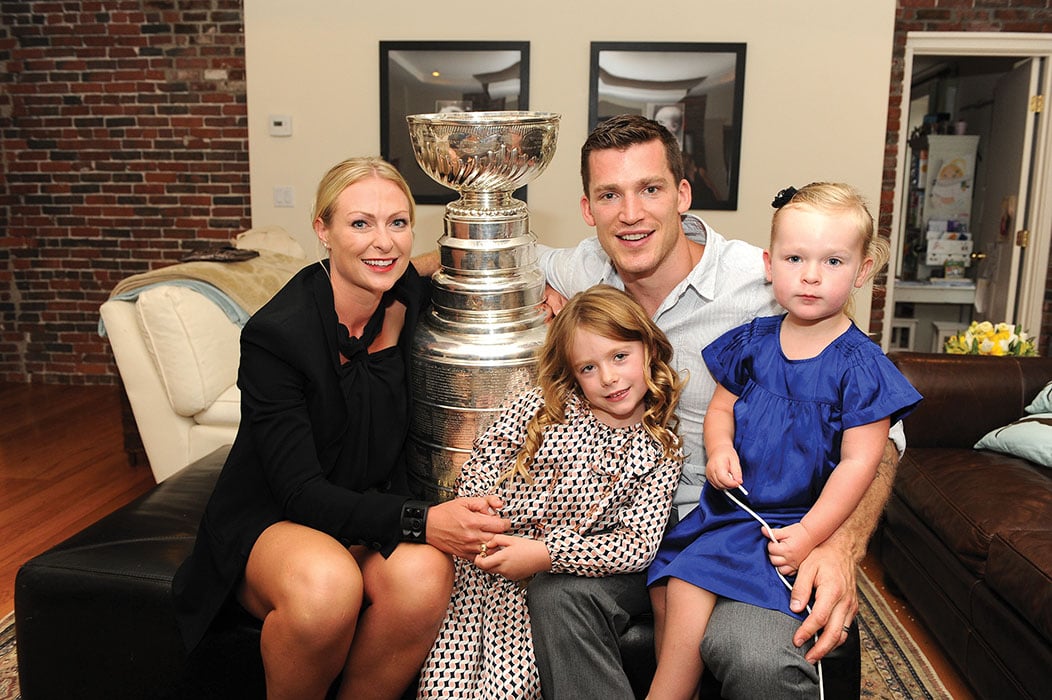 Krista, Andrew and daughters Ava (left) and Stella pose with the Stanley Cup after the Boston Bruins (then Andrew’s team) defeated the Vancouver Canucks in 2011.

In 2003, Andrew was traded to Calgary and was on a plane at eight the next morning, leaving Krista to close up bank accounts, collect medical records and try to get the deposit back on their rental. There was another sudden trade to Boston in 2007 and then a move to Edmonton last year. “In some ways it gets easier because I’ve gotten better at it,” she says. “But as the kids get older, moving becomes a much bigger ordeal.” Providing stability for her young family is a top priority — Andrew’s new contract as team captain of the Edmonton Oilers came with a “very attractive” no-trade clause. “Even if we’re in the Stanley Cup finals, someone still has to make sure that the girls are up and ready for school in the morning.”

Krista and her daughters go to games on weekends, but hockey doesn’t define their family. “Don’t get me wrong, Andrew loves his job, but we’re not the kind of family that’s going to send out a hockey-themed Christmas card, and many of our closest friends aren’t from that world,” she says.

At the moment, being the family backbone is her full-time job, but she does feel some pressure to figure out her next step, especially with her youngest entering grade 1 next fall. Although she’s involved with several charities in Edmonton, Krista admires women like Rachel Gagner (a doctor, married to Sam Gagner of the Arizona Coyotes) and Susan Yelle (a nurse practitioner, married to former NHLer Stephane Yelle). “There’s a part of me that wishes I had that.” She is thinking about enrolling in some distance education courses as a way of bulking up her professional qualifications in anticipation of a second career, possibly something in fashion merchandising or e-commerce. “I’m lucky to be in a position where I can take time and figure these things out. It’s not always easy, but let’s face it — we have a pretty good life.” 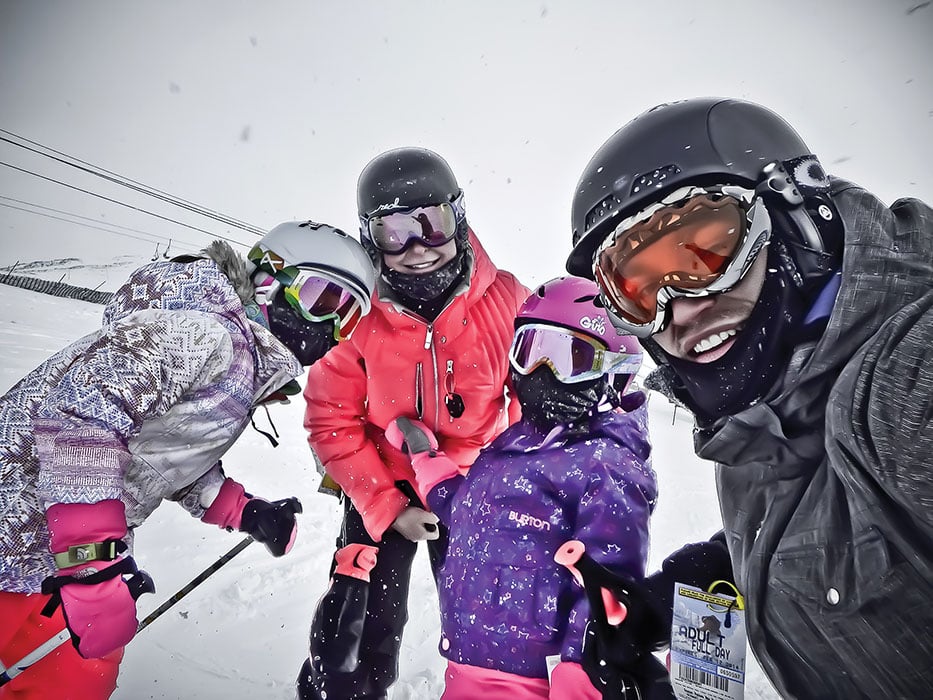 Sharing their love of winter sports with their girls on a family ski holiday. (Photo, courtesy of Ference.)