Fewer Inuit children were taken than from other Indigenous communities. But being so far from home left survivors with unique feelings of loss. 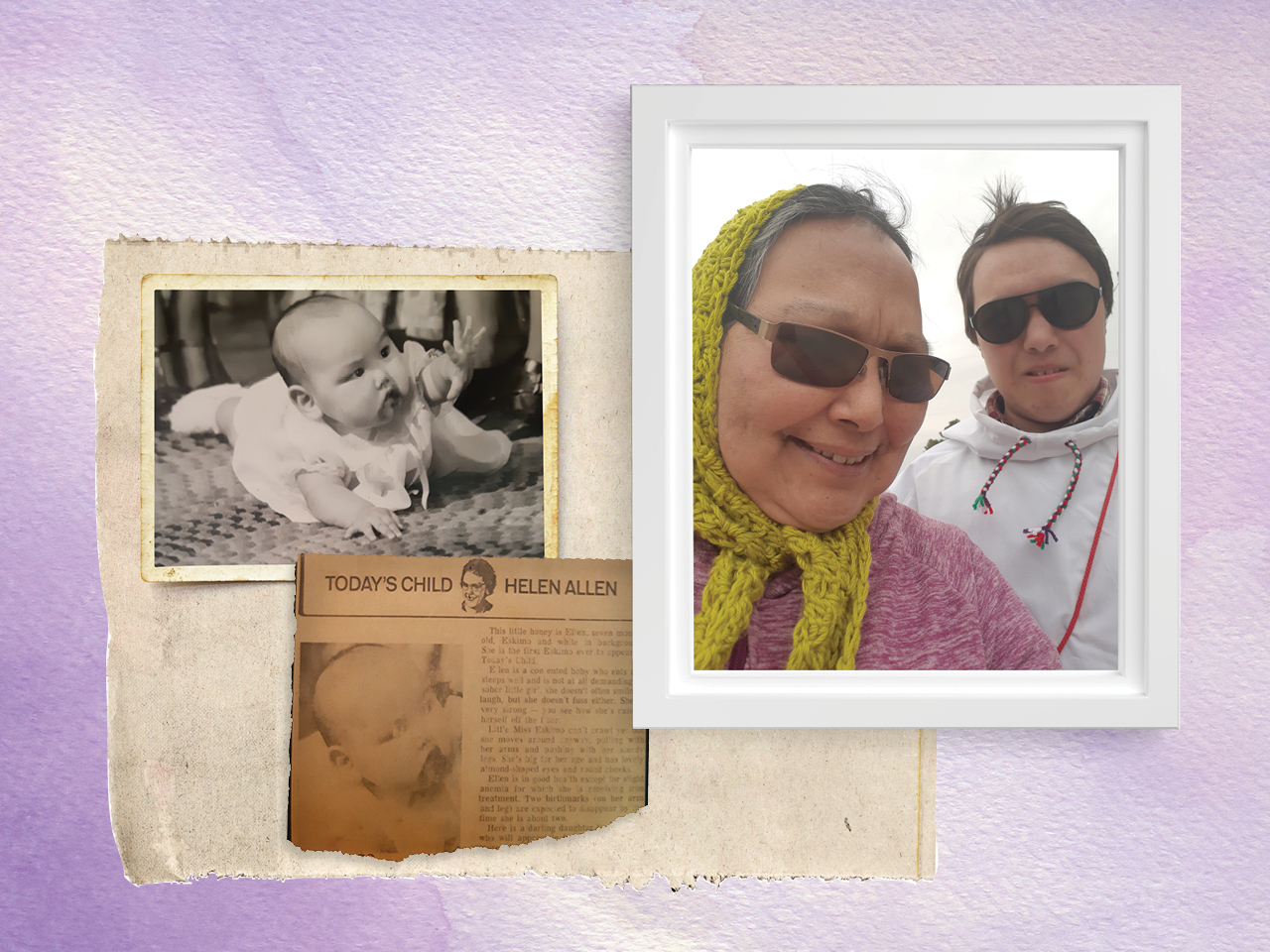 Left, a photo of Tauni Sheldon as a baby, along side a 1970 ad promoting her adoption. Right, Sheldon and her son. (Photos: Courtesy Tauni Sheldon. Background and frames: iStock)

“This little honey is Ellen, seven months old.” That’s the intro to a September 1970 installment of “Today’s Child,” an adoption column in the now-defunct Toronto Telegram. The words ran next to a photo of a chubby-cheeked baby girl in a frilly white dress. She’s on her tummy, reaching out with one hand; it looks as though she’s learning to crawl.

Ellen, readers are told, is the column’s first Inuk child (though an outdated word, now recognized as a slur, was used to describe her instead). She’s described as “a contented little baby who eats and sleeps well and is not at all demanding,” with “lovely, almond-shaped eyes and round cheeks.” But the seemingly sweet description quickly becomes disquieting: “Here’s a darling daughter for a couple who will appreciate her heritage,” it continues. “To inquire about adopting Ellen, please write to….”

“Ellen” is now Tauni Sheldon, the name she’s used for a large part of her 50 years. She was born on February 7, 1970, to a legally blind Inuk woman who flew with a doctor from Inukjuak, a village in Nunavik along Quebec’s Hudson Bay coast, to Thunder Bay, Ont. to give birth. “My mother held me for three hours until I was taken away,” Sheldon says of her biological mother.

Sheldon’s adoptive parents were a southern Ontario couple that did indeed appreciate her Inuit heritage—they gave her the name Taunooki, which means “a light in the dark”—but she still grew up feeling different from those around her, being bullied through school. Because of that, “I didn’t want anything to do with my Eskimo heritage [for a long time],” she says. That changed in her early 20s, when her curiosity led her to Nunavik for the first time. Now, she wants Canada to compensate her for everything that she’s lost.

Sheldon is one of thousands of survivors of the Sixties Scoop, a period between the 1950s and the 1980s during which the federal government took an estimated 20,000 Indigenous children from their families and adopted them out to non-Indigenous families. After a drawn-out class action process, the federal government agreed in December 2018 to pay up to $750 million in individual payments to survivors, as well as pay $50 million for a Sixties Scoop Healing Foundation, an independent body mandated to provide cultural reclamation, advocacy and mental health supports.

So far, 34,768 Sixties Scoop survivors have applied for a settlement. Only 774 are Inuit. In June of this year, the Federal Court of Canada finally approved an order allowing Collectiva—the company administrating the class action—to begin issuing interim payments of $21,000 to over 12,500 people whose claims have already been approved. That leaves over 20,000 people whose applications haven’t been assessed yet, including Sheldon.

With so few Inuit navigating the process, Sheldon says the whole experience has dredged up feelings of loss and anxiety. Those feelings are only intensified by the delay caused by the COVID-19 pandemic. Some survivors remain in isolated communities unable to find documentation to support their claim: either they can’t get to public archives, or the archive has been closed to the public. Collectiva has paused some of its review process; administrators are still approving claims but have stopped denying any claims for the foreseeable future. This slowdown means it will take longer to determine the total number of applicants, as well as the final individual payment each approved claimant will ultimately receive.

Martha Peet, an Inuk mother who lives in Winnipeg, had her application to the Sixties Scoop class action rejected in 2018. Originally from Taloyoak, Nunavut, Peet was a young teenager in the 1960s when she was raped by a white man temporarily working in the area and became pregnant. When Peet went into labour at just seven months, she was taken by medical aircraft to a Yellowknife hospital. Her son, Jako Equalla, was born in March 1965.

“He was so, so tiny,” Peet said of Jako’s birth. “And then I remember understanding that they were going to send him to Edmonton and I was going home. They were afraid that if he didn’t spend time in an incubator that he could go blind.” She returned home to Taloyoak without her baby.

For months, Peet waited for news of her son’s return. Finally, she approached the federal administrative agent who worked in the village to ask when her son would be coming home. “I remember him saying, ‘your mom is too old to adopt a baby and you’re too young, so we’ve decided to adopt him to a nice family in Edmonton,’” Peet said. “Those words have been as close to me as my hand to my face. I will never, ever forget that.”
Thankfully, Peet’s infant son was eventually returned to her, three to four months after they were first separated. To this day, she hasn’t been told if and where he was placed in foster care, or what prompted his return.

Peet says that no explanation was given for the rejection she received. But as part of its approval process, Collectiva must establish that claimants who were placed with a non-Indigenous family were there for a significant enough amount of time that they would have experienced a loss of language and culture. Although Peet went through months of uncertainty, her infant son may not have been away long enough for their loss to be recognized. “It was not right,” said Peet, who is considering appealing her denied claim.

Both women’s experiences happened at a time when government protocols in many Arctic communities had begun to shift away from supporting traditional home births to flying Inuit women to southern hospitals to deliver. Although the apprehension of Inuit children was clearly part of a wider government policy, there is little evidence that the practice was as coordinated as in other Indigenous communities. But even if apprehensions were relatively rare, the Inuit experience of family separation was uniquely difficult.

Ottawa-based lawyer Evatt Merchant is class counsel for the settlement. He said that he’s come to learn that distance presented numerous challenges for Inuit survivors of the Sixties Scoop. Not only were many scooped while they were away from home and vulnerable, but most were adopted out far from their homelands—in southern Canada, or even, he says, in other countries. “I think that there’s an added barrier and feeling of separation,” Merchant said. “It’s also a long way in terms of spirituality and the way that people live is different in the North from the rest of the country.”

Despite their small numbers, survivors like Peet and Sheldon want to ensure the settlement is responsive to Inuit survivors. While an organization called the Sixties Scoop Network has created a digital mapping project to track the diaspora of survivors, Sheldon said Inuit would benefit from having a separate database that better documented the history of why and how Inuit were scooped, which could lead to culturally-relevant healing initiatives.

And both women wish that either Inuit Tapiriit Kanatami, Canada’s national Inuit association, or one of the regional land claim organizations would organize to represent Inuit survivors of the Sixties Scoop across the country. “Inuit tend to be a last thought,” Sheldon said. “Or we’re expected to blend into the larger group.”

Sheldon didn’t meet her biological Inuit family in Nunavik until she was 23. “It was big. It was very emotional. It took almost an entire lifetime to figure out what happened,” she says.
Eventually, she found a unique way to bridge the geographic gap, spending years as a pilot flying Twin Otters for Air Inuit between southern Ontario and her home region. That work allowed her to visit Inukjuak and connect with her now 76-year-old birth mother and other relatives.

Today, being in the North feels both foreign and like home, she says. “I’m still learning culture. It’s taken me a long time.” Her teenage son recently travelled to Inukjuak to meet his Inuit family.

Sheldon has yet to hear back about the status of her application, and only 152 Inuit have been approved so far in the Sixties Scoop settlement. “I’m angry that I haven’t heard if I qualify,” Sheldon said. “But how do you quantify the loss of a culture—a lifetime of disconnect?”