Tracy Moore On Systemic Racism, Anti-Blackness And Her Journey To Speaking Out

“This is not even about me. This is a community situation, and as a member of the human race, you should be appalled.” 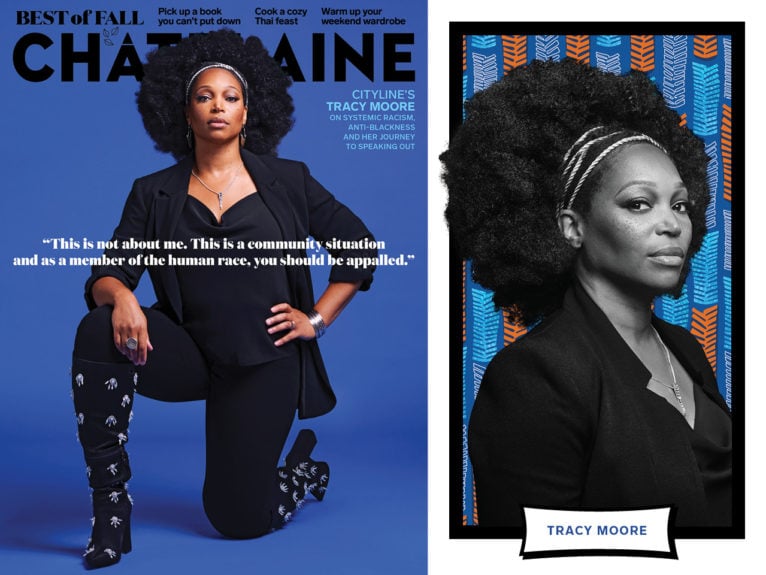 The Time Is Now: this profile is one in a series celebrating Black changemakers across Canada. Read it all here, or by picking up a newsstand copy on August 27.

Tracy Moore’s default setting is positive. Her Instagram account is a treasure trove of fun times and family photos, alongside words of wisdom, inspiration or just straight-up realness. It’s the kind of energy that is a welcome reprieve during a news cycle that’s been inundated with images of Black death, Black struggle and Black resistance. But although she has always touched on issues that matter to her personally, Moore has been particularly intentional about using her platform in recent months, as she posts about Black Lives Matter, meaningful allyship and the overall experience of being Black in this particular moment. For Moore, that experience is both exhausting and hopeful.

“I feel like I want to fly to an island and just plunge my head in the sand and forget any of this is happening some days,” says Moore, host of Cityline, North America’s longest-running daytime show for women. “But I feel this push to keep going. And it’s because it’s the first time in my 45 years that I’ve actually seen this willingness to listen.”

Moore’s parents are Jamaican immigrants, and the family sought out the few Black faces on the air in her childhood. “It could be a commercial, and we’re all running to the TV to see who it is,” says Moore, who lives in Toronto with her husband, two kids and a giant fur baby named Ozzie. She began her own career at Citytv’s Breakfast Television before joining Cityline in 2008.

As host of the show for over a decade, she has become known for her enthusiastic and informed coverage of the latest fashion, beauty, home decor and wellness trends. Lately, though, those who expect Moore’s trademark sunniness have gotten new insights into the issues that she faces as a Black woman.

“I truly love the lifestyle space. But it’s very much at odds with this idea of talking about oppression and discrimination and racism,” says Moore, recalling the first time she spoke about such issues on-air, in the wake of the killings of George Floyd and Breonna Taylor. “I said, ‘I can’t believe I’m actually talking about this right now on television,’ because it has been so many years of trying to make the environment very comfortable for everyone around me.”

After years of trying to convince a mostly white Canadian audience that she was one of them, finally taking a moment to fully exist as a Black woman felt vulnerable and terrifying at first. It’s also been a tough pill to swallow for some fans.

“It’s almost like when Beyoncé came out with ‘Formation’ and everyone thought, ‘Oh my goodness, she’s Black!’” says Moore, who is firm and honest with her audience. In July, she responded to an Instagram follower who accused her of creating “more chaos than good” by promoting a Cityline segment dealing with white privilege and fragility.

This year has seen a number of Black women in Canadian media publicly share their experiences of working at predominantly white organizations—from being underpaid, to being passed over for promotions, to enduring stereotypes and slurs.

“I’ve been on the fence about [saying] ‘let me just roll out the scroll of all the ways I’ve been wronged since being called the N-bomb on the playground in grade 1,’ ” says Moore. “While I have great respect for the people who are doing it . . . I am out of bandwidth for having to show my trauma in order to get people on my side.”

She’s also reluctant to overshadow a systemic, global problem. “This is not even about me,” she says. “This is a community situation, and as a member of the human race, you should be appalled.” In June, Cityline launched LIVE: #CitylineReal on Race, a YouTube series about the need for systemic change in Canada.

While she does think that Canadians are listening, Moore is also feeling a familiar sense of dread about what comes next. “I think that for someone outside of the community to see this level of cynicism when things seem so hopeful, it’s hard to explain,” she says. “But there have been so many moments where you thought, ‘Well, this is gonna be enough to prove to people the world is not working.’ But it never has been.”

Still, she continues to speak up, and to show up as her most authentic self. And in the midst of it all, she is still finding her joy. From blasting hip-hop through her AirPods during morning workouts, to reading diverse Canadian romance novels, to meditating daily and taking long walks in nature with Ozzie, Moore is demonstrating the radical self-love that’s so badly needed by Black women right now.