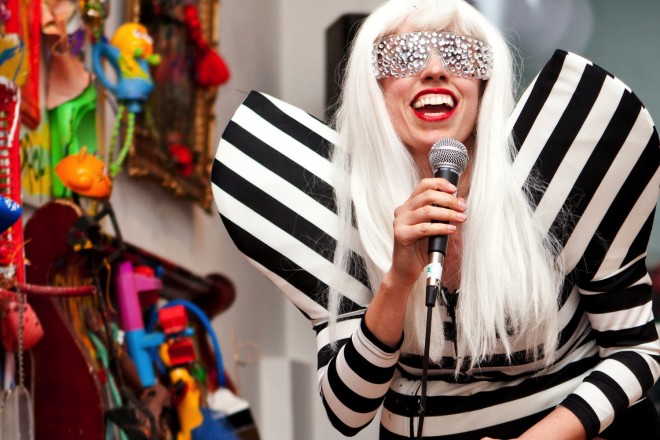 In October 2010, actress and singer-songwriter Athena Reich received a rather unusual request from an event organizer in Washington, D.C.

“We are planning our New Year’s Eve Gala and we are looking for someone to perform two to three Lady Gaga songs, live,” the email read. The gig was for an audience of 3,000 young professionals. “We want it to feel like we have Lady Gaga present at our event.”

Six years later, Reich is the Lady Gaga impersonator to hire for your overpriced Oscars party. According to New York Magazine, at least. She charges $600 an hour because she does her job so well that Billboard confused her for the real Gaga. A seconds-long appearance in a Gaga-related Google Chrome commercial earned her $20,000, and she’s often asked to walk red carpets alongside real celebrities and has even opened for The Roots.

“My success is something I didn’t imagine,” says Reich, who aspired to become a familiar face on Broadway. Being Gaga has allowed her to witness the absurdity of New York’s wealth firsthand — massive baptisms, baby showers and bar mitzvahs as well as corporate jobs for companies like Time Warner, Chanel and Tumblr.

Related: Here’s why Dolly Parton is the epitome of a modern woman

As a child in Toronto, Reich joined a theatre company for youth and went on to win a YTV improv contest judged by Eugene Levy. After completing a degree in music at Concordia, she packed up her bags for New York. At first, she paid the bills by painting herself gold and modelling as a statue in subway stations.

Before her Gaga career, Reich’s feelings towards the singer, who was then riding high on the 2009 release of The Fame Monster, were lukewarm at best. But on her agent’s advice, Reich posted a cover of “Bad Romance” to her YouTube channel as a way to draw fans to her own music. The video itself is simple, poorly lit and features Reich with closely cropped brown hair and her guitar. The pared-down aesthetic couldn’t be further from Gaga’s sequinned explosion at the time. But her natural likeness to Gaga was enough to attract attention.

Though Gaga’s popularity has waned over the years, demand has always been high enough that it was worthwhile to continue performing — but at 36, Reich hit an unavoidable obstacle. She decided she wanted to get pregnant. Instead of putting a hold on her impersonations, she started performing stand-up as an expectant Gaga, throwing up glitter and unicorns on stage, then having her water (balloon) break. In 2014, she decided to write a play about Gaga giving birth in front of an audience. #ARTBIRTH ran for a year at the Laurie Beechman Theatre, an 80-seat venue tucked in the basement of the West Bank Cafe.

While she was writing and performing the show, Reich faced numerous setbacks while attempting to conceive, so she poured all her energy into it. “#ARTBIRTH was a distraction from the pain of infertility and the losses I was experiencing,” she says.

Reich gave birth to her son last September. She’s quickly learning how tiring it is to be a single mom in the city that never sleeps and is considering moving back to Toronto. “Now having a child, I have this total longing to come home to be near family and friends,” she says. In addition to acting gigs, teaching and working on an electronic pop album, Reich is still doing shows as Gaga. Her next performance takes her to Atlantic City in April.

Reich says although she didn’t love Gaga’s music at first, she’s not sick of performing her work. In fact, she’s cultivated a deep respect for the musician’s abilities. And six years later, putting on her persona still brings her joy.

“The most fun part for me is when people really believe I’m her,” Reich says. “Everyone pulls out their cell phones and iPads and starts freaking out.” Watching grown men and women scramble to get a photo with her has given Reich a little taste of the “fame monster” but she’s never really been after celebrity.

More:
Exclusive: Lucy DeCoutere on the Ghomeshi disaster
The baby girl I almost had
Inside pro tennis’s disturbing battle of the sexes