Snakes And No Netflix? Dear Cottage: I Quit You

Leah Rumack on why it’s time to give up on the Canadian dream of spending time together in bug-infested woods. 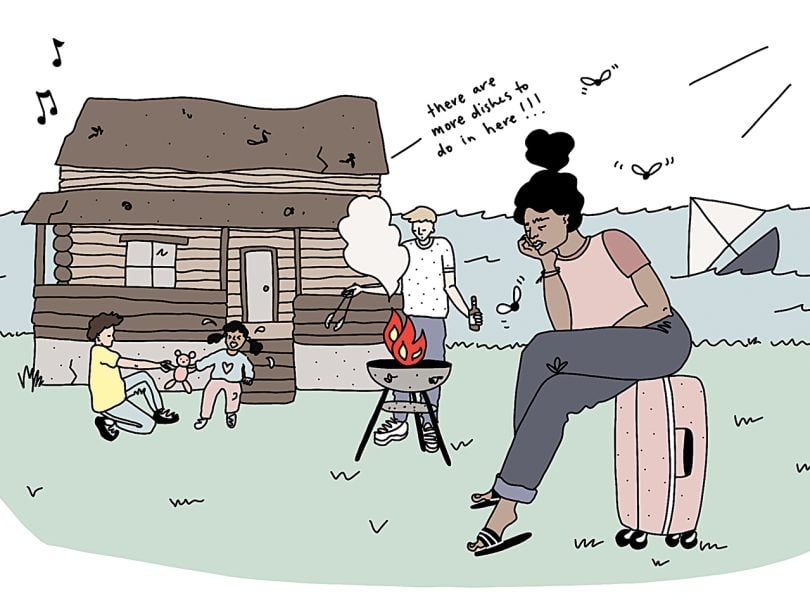 I’m writing to tell you that despite a lifetime of being told you’re the Ultimate Canadian Experience, I’ve decided that you, cottage, are crap.

I felt the first stirrings of discord back in January, during a text thread with my three friends about which crumbling edifice next to a body of water we could rent to take part in the national pastime of spending time together with family in an un-air-conditioned environment with snakes and no Netflix. This thread was 213 messages long and involved Susan reminding us 17 times that she’s on a year-long diet, so “Bring chips and die, bitches!” and Mary—who has a three-year-old daughter whose main hobbies are speaking French and drawing French kittens—wanting to ensure that nobody’s nine-year-old boys will be bringing water guns because that would set the wrong tone, and Karen wondering if my husband was going to get drunk and flirt with her again. (LOL!) There was also a certain amount of good-natured arguing over who should bring the potato salad that, frankly, I felt crossed a few lines.

My unhappiness began to fester in April, after I realized I’d forgotten to go to work because I was pinning 83 ideas on how to dress up corn on the cob (news flash: zippy crema!), creating an Excel document to plan 47 meals for 23 people and buying all those curly anti-mosquito things.

Events really came to a blistering head soon after we arrived and met you, cottage. Perhaps it was because your septic tank broke. Maybe it was the fact that handwashing dishes three times a day while gazing sadly at the water’s edge and wondering whether I should start heating up the barbecue for dinner wasn’t quite as relaxing as I had dreamt. Or it could have been when my son whimpered that the sky was “too big.” What I do know is that when Karen’s husband starting blaring German noise art over his portable speaker to remind us all that he’s not just a man, he’s also an architect, it was just too much.

In short, cottage, next summer I’ll be staying home. Please say hello to Canada for me.