The Young & the Restless’s Eric Braeden on soaps, marriage and moustaches

The man behind the dashing and devilish Victor Newman talks about his new memoir. 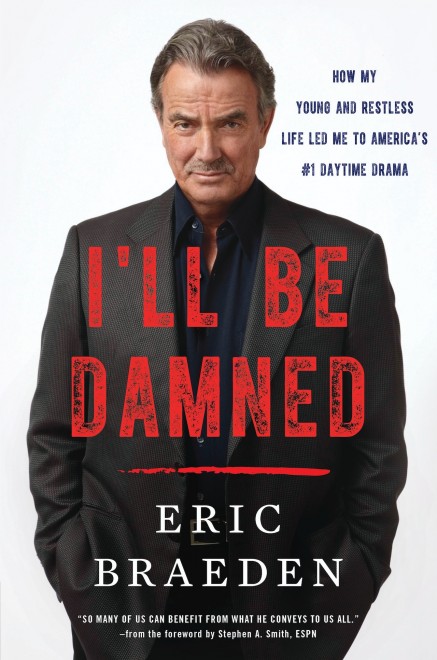 Not everyone immediately places the name Eric Braeden, but “Victor Newman” rings instant bells. The actor behind The Young and The Restless patriarch is just as interesting his character: the 75-year-old, German-born actor has been in the biz since the 1960s with credits on the Mary Tyler Moore Show and Titanic, and he’s played Victor Newman since 1980. In his new memoir I’ll Be Damned, which is out on February 7th, he also details his difficult childhood, coming to terms with the fact that his father was a member of the Nazi party and his struggle to make it as a German immigrant in the U.S. Chatelaine spoke with Braeden about all this and, of course, his iconic moustache.

You have been playing Victor Newman for 37 years, how are you most like or unlike him?

Is there anything you admire about the character?

He’s very complex, and obviously I get to play many sides to him, he can be ruthless, as you very well know, but he can also be very vulnerable. Actually, he’s a very tragic character in the sense that, although he wants family and he wants closeness, he doesn’t trust it because of his childhood experiences, because he was left at an orphanage. That makes him a very interesting character.

Do you think you would have kept your moustache all these years if you didn’t have to play Victor Newman?

I honestly don’t know. I grew that moustache when I did Gunsmoke — I’ve done five different Gunsmokes. They asked me “could you do a moustache in this one?” And I said alright. So it has been on ever since.

In your book, you write that you realized the impact of the show when you came to Toronto to do your first big meet and greet at a mall. The crush of people waiting to see you and Doug Davidson was so intense you had to leave. Tell me about that.

I was so shocked by it, the reaction was so disproportionate with what I thought we were doing, which I didn’t think was all that important. My first reaction was, “I don’t want this. I don’t want to do this.” And then when we did the next day’s showing, I told them either get local prison inmates or football team or cops — something needs to change because we can’t do this this without security because it endangers everyone.

So they raised the platform [where we were speaking] and it was wonderful. Suddenly I realized that what I did made a difference. It was an epiphanous moment that answered a question I asked for a long time: Why am I doing this? What is the intrinsic value of it? Does it have political value? Does it have social value? And then I realized, wait a minute, I entertain people.

How have soap operas changed since you started 37 years ago?

We were always ahead of the times because Bill Bell insisted, I think urged on by his wife Lee Phillip Bell who is a wonderful lady, to deal with current social problems. I think we have done that. We had story lines dealing with drug addiction, we had another storyline dealing with ravages of alcoholism. We had one dealing with disenfranchised youth and another one involving homeless people.

Shifting from your show life to your real life: You’ve been married for over 50 years. What’s the secret to a long-lasting marriage?

Falling in love is the first part of it, but you also have to like the person. That’s what’s important; that’s what makes a marriage endure. Do I basically respect the person for who they are? And that only comes out in certain life situations, or when political decisions have to be made or there are certain developments on the news, then you get to know the person.

You mentioned politics, and I’m interested in your take on what’s happening in the U.S. right now.

You came to America as an immigrant with nearly nothing — are you worried about closing borders? Do you think people will have the same opportunities you did when you came?

Look, I think this is a passing phenomenon, not to be taken too seriously, although he tries very hard to be taken seriously. It is very anomalous; let me put it that way. Beyond that I will spare you more pejorative observations.

More:
I have three kids of wildly different ages. So which dad am I today?
After 35 years, abortions are finally available in P.E.I.
13 of our best chicken soup recipes