Ebonnie Rowe's answer to misogyny in the music industry

Twenty years after she founded the all-female music showcase Honey Jam, Ebonnie Rowe sounds off on sexism in the recording industry and supporting young talent. 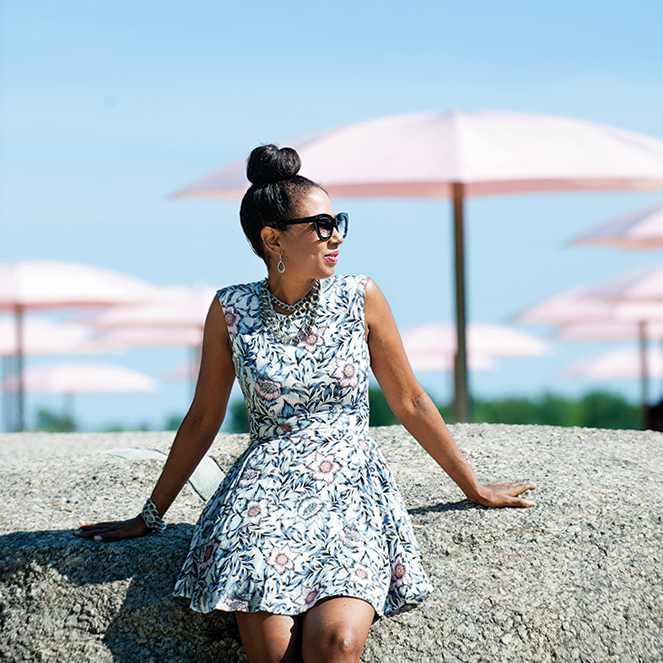 Somewhere in the origin story of every successful woman is a healthy dose of serendipity. That’s certainly true for Ebonnie Rowe, the Toronto legal-assistant-turned-founder of Honey Jam, an all-female, multicultural musical showcase. Now celebrating its 20th year, the annual event has provided a springboard for singing, rapping and DJing talent of every genre, including Nelly Furtado and Jully Black. Pretty good for a woman who “had no plan” to enter the entertainment world.

Though Ebonnie comes from a musical family — her dad and brother play guitar; she played classical piano — her career began in community service. In 1990, while attending the University of Toronto and dealing with the untimely death of a close friend, Ebonnie began contemplating her legacy. She dropped out of school and started a mentoring program for at-risk black youth.

“My female mentees were telling me that their little brothers were calling them ‘bitches’ and ‘hoes’ because they had heard Ice Cube say it.” Frustrated by the misogyny pervading rap culture, Ebonnie vented to DJ X, then one of the biggest hip hop DJs in Canadian radio, who asked her to come on his show. “At the time, I had a full-time job as a legal assistant,” she says. “I’d never run a radio show. But he gave me an opportunity to use my voice, and I’d be a fraud if I said I didn’t know how to do that.”

The editors of Toronto’s MicCheck Magazine were listening in and, impressed by her candour, asked her to guest-edit a special all-female issue of their publication. At the mag’s wrap party — called Honey Jam — Ebonnie was approached by throngs of enthusiastic attendees, all asking, “When’s the next party?” “I slept on it and thought, ‘Maybe I’ll do another one and see how it goes.’ ” That was 1995.

What started as a one-off “ice pick in the glass ceiling” is now a full-blown summer event in Toronto, courting women from pop, rock, country, opera and hip hop. Honey Jam was intended as a supportive showcase, not a cut-throat American Idol–style competition. Even so, music scouts were there, hungry for the next big thing. “I’d watch the girls come off the stage and the wolves would just pounce,” Ebonnie says. “I felt very protective of them.”

A self-described “mama bear,” Ebonnie founded PhemPhat Entertainment Group in 1995 as an educational incubator of sorts. Each year, Honey Jam alumni congregate for full-day workshops to pick the brains of Canadian recording-industry vets. Past participants have parlayed those connections into paid gigs, while others host get-togethers to co-write music. Says Ebonnie, “I want to give them as much ammunition as possible to succeed.”

Thanks to cheap, accessible software and, well, YouTube, the creation of music has become far more democratized, but Ebonnie says the business isn’t quite a “Kumbaya” bastion of gender equality just yet. Still, her accidental labour of love has had a lasting impact. “These [young women] telling me Honey Jam was life-changing — that is the fuel that keeps me going,” she says. “It’s not just about entertainment: It’s about activism too.”