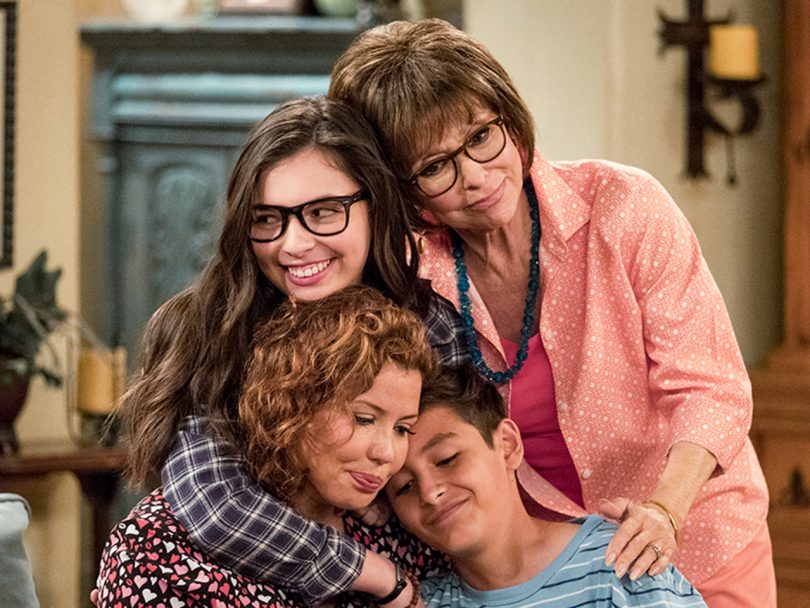 One Day at a Time (Photo, Netflix Canada)

It’s safe to say we could all benefit from a good laughing session. This weekend, unplug from the news and binge our list of 13 of the best sitcoms available on Netflix Canada. From Netflix’s seriously funny family show Marlon to old-school classics like Friends, That ’70s Show and Full House, you’ll laugh out loud with these feel-good faves.

Synopsis: When a woman is rescued from a doomsday cult and lands in New York City, she must navigate a world she didn’t think even existed anymore.
Cast: Ellie Kemper, Jane Krakowski, Tituss Burgess
Why you should watch it: Kimmy Schmidt (Ellie Kemper) is the most loveable — and surprisingly feisty — character to ever hit our screens, full stop. Plus, if Titus Andromedon had a show of his own we would one hundred percent watch it because he is comedy GOLD (see: his Beyoncé Lemonade parody).

Synopsis: Brilliant-but-immature Brooklyn detective Jake Peralta must learn to follow the rules and be a team player when his squad gets an exacting new captain.
Cast: Andy Samberg, Andre Braugher, Stephanie Beatriz
Why you should watch it: The show is very progressive for prime time (read: Rosa Diaz (Stephanie Beatriz) telling her coworkers she’s bisexual and the show’s storyline about racist cops) and each character brings their own unique comedic talent to the screen. We’re still thinking about the scene where Jake makes the criminals sing “I Want It That Way.”

Synopsis: This hit sitcom follows the merry misadventures of six 20-something pals as they navigate the pitfalls of work, life and love in 1990s Manhattan.
Cast: Jennifer Aniston, Courteney Cox, Lisa Kudrow
Why you should watch it: From the nostalgia-inducing ’90s fashion and beauty moments (we definitely asked our hairdresser to give us “The Rachel”) to the roster of celeb cameos and memorable, GIF-worthy scenes, there’s a reason this is one of our all-time favourite sitcoms ever.

How I Met Your Mother

Synopsis: Ted’s epic search for his soulmate is told largely through flashbacks, as an adult Ted recounts to his kids how he met their mother.
Cast: Josh Radnor, Jason Segel, Neil Patrick Harris
Why you should watch it: Aside from the disappointing series finale, this popular sitcom is worth bingeing for the nail-biting cliff-hangers, celebrity appearances and Barney Stinson’s douchey-yet-loveable moments, which also double as useful GIFs to describe our every mood.

Synopsis: Suddenly broke, the formerly filthy-rich Rose family is reduced to living in a ramshackle motel in a town they once bought as a joke: Schitt’s Creek.
Cast: Eugene Levy, Catherine O’Hara, Daniel Levy
Why you should watch it: This underrated Canadian sitcom will leave you howling with laughter. Don’t believe us? David and Alexis Rose’s hysterical brother-sister banter is proof enough.

Synopsis: Aiming to straighten out her complicated personal life, a top doctor seeks to overcome her obsession with romantic comedies and find a soulmate.
Cast: Mindy Kaling, Chris Messina, Ed Weeks
Why you should watch it: Can we give a round of applause for The Mindy Project, please? The fact that this sitcom has a South Asian female lead — played by comedy queen and all-around bad-ass Mindy Kaling — who is strong, smart and sassy is reason enough to watch the show. Her unapologetic feminism and relatable relationship with dieting are only two of the many reasons why we love her. P.S. The show’s episode on white male privilege is required viewing.

Synopsis: Sisters D.J., Stephanie and Michelle grow up with three devoted father figures: their widowed dad, his goofy best friend and their cool uncle.
Cast: Bob Saget, John Stamos, Dave Coulier
Why you should watch it: As a classic family sitcom (the show lasted eight seasons long, spanning over almost a decade), this feel-good comedy will make you laugh-out-loud and blubber like a newborn baby. And don’t even get us started about Uncle Jesse — he’s such a dreamboat.

Synopsis: Feel groovy in 1970s suburbia, where a teen and his pals hang in the basement, listening to rock and indulging other hazy benefits of ’70s culture.
Cast: Topher Grace, Mila Kunis, Ashton Kutcher
Why you should watch it: Check out the budding romance between now-married couple Mila Kunis and Ashton Kutcher and let the quirky throwback fashion inspire your summer outfits. And you’ll feel major nostalgia for the motley group of friends’ hilarious journey to adulthood.

Synopsis: This hit comedy chronicles the foibles of disgruntled office workers — led by deluded boss Michael Scott — at the Dunder Mifflin paper company.
Cast: Steve Carell, John Krasinski, Jenna Fischer
Why you should watch it: In case you were wondering where all of your most-used GIFs come from, this classic sitcom is your answer. If you’re in desperate need of some office prank inspiration or motivation to find joy at your desk job, this show is for you. P.S. Michael Scott is a whole mood for summer:

Synopsis: Still rebounding from a breakup, Jessica Day moves in with three single guys, all of whom are ready to help her understand the ways of the world.
Cast: Zooey Deschanel, Jake Johnson, Max Greenfield
Why you should watch it: We’ve been envious of Zooey Deschanel’s bangs and quirky personality since like… forever, so it’s no surprise that we fell in love with her character Jess Day. And she’s one of the most relatable leads we’ve seen in a sitcom (read: her hilarious walk of shame and all-too-real quotes about PMSing).

Synopsis: Amicable exes Marlon and Ashley settle into co-parenting duties and continue to work out where they stand as friends, former flames and a family.
Cast: Marlon Wayans, Essence Atkins, Bresha Webb
Availability: Yes for Season 1, Season 2 drops on August 22
Why you should watch it: Comedian Marlon Wayans is reason enough to tune in. He truly lights up the screen with his OTT personality, quick wit and youthful spirit, plus he leaves us in stitches every. damn. episode.

One Day at a Time

Synopsis: In a reimagining of the TV classic, a newly single Latina mother raises her teen daughter and tween son with the “help” of her old-school mom.
Cast: Justina Machado, Rita Moreno, Todd Grinnell
Why you should watch it: It’s so refreshing to see a sitcom about a Cuban-American family (especially since the 1975 original starred an all-white cast) that is equal parts serious and silly. Plus, Lydia Riera (played by Hollywood icon Rita Moreno) is the maternal figure we all wish we had in our lives. I mean, look at those moves!

All About the Washingtons

Synopsis: Hip-hop icon MC Joe Speed (a.k.a Joey Washington) retires from showbiz and finds a new rhythm balancing business, romance and everyday family chaos.
Cast: Joseph Simmons, Justine Simmons, Kiana Brown
Availability: Released on August 10
Why you should watch it: All we have is the trailer to go off of right now, but it’s safe to say this highly-anticipated family comedy series will deliver on hilarious one-liners and a whole lot of family love.