The Breakfast Television co-host would, firstly, sleep in followed by French toast, The Real Housewives of New York, a family lunch and a dinner date with her husband 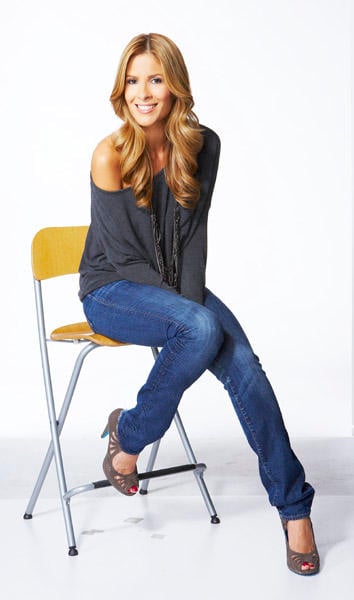 Dina Pugliese values her Saturday mornings for good reasons. For one, it means the warm and funny co-host of Citytv’s popular morning show Breakfast Television actually gets to sleep in. For two, it means she gets to finally spend time with her husband and family—not to mention catch up on her favourite guilty-pleasure TV shows.

Pugliese kindly sat down with Chatelaine.com to describe her perfect Saturday with friends and family.

My perfect Saturday would be first to wake up without an alarm clock and after the sun comes up because sleeping in is tough when you get used to this ridiculous schedule that we have. Sleeping in for me means 8 or 9 a.m., as opposed to 3:30 or 4 a.m. Waking up to birds singing, after the sun comes up, and, believe it or not—I know this makes it sound like I’m 80—but also hearing jazz music, that’s a nice gentle entrance to the day.

Then I make my homemade French toast with turkey bacon, some fresh java joe, and eat breakfast with my husband. After we’re done digesting our nice leisurely breakfast, one of our guilty pleasures is to watch The Real Housewives of New York. I can’t get enough of it. I got my husband into it, too, though he’d die to know that I just told you that.

In the afternoon, we would see family and friends because I love spending time with family. I’m a good old Italian girl, who moved out of her house when she got married, so we’re close-knit. Every weekend [my husband] and I try to get everybody covered, his side and my side. He has a sister with some nephews plus his parents; I have two sisters, plus my parents.

We would go to visit my family in Woodbridge for lunch and my sisters would be there with their babies. When we have lunch at my mom and dad’s in Woodbridge—the lunch, I marvel—I don’t know how they do it. My mom and dad both cook. My dad’s in the kitchen making his braciole, which is his specialty, and then he’ll barbecue. My mom will make chicken in a white wine and mushroom sauce; she’ll make a lasagna, and then of course, in the beginning you’ll have sliced Parmagiano Reggiano, and my dad will have sliced the prosciutto he’s got curing in the basement. It’s exactly what you would think when you think tradition, which is unfortunate because it’s stopping at them! The only thing in my basement is paint and maybe a curled-up dead bug.

There’s a lot of playtime and a lot of laughter, a lot of impromptu dancing in the living room. I have these two Billy Elliot tutus that they gave me for the opening on BT, so I bust them out and put them on my little one-year-old niece and she just gets down in the tutu. It’s so big on her you have to wrap it around her twice.

At Easter, we do the most amazing dessert. It’s called zeppole. It’s the most light and airy kind of cream puff with custard filling and icing sugar on top. It’s an authentic Italian pastry that’s only around for a few weeks each year. No matter what, you can always pack one of these bad boys away. I always say there’s a separate compartment in your stomach for desserts. There are two places in Woodbridge: The Big Cannoli and Sweet Boutique and they churn out these things morning, noon and night. When you get close to Easter you have to pre-place your order.

We would cap the day off by getting all dressed up for a nice romantic date, just my husband and me. We never get the chance to see each other during the week because we’re on opposite schedules. The only time I see my husband is Saturday and Sunday! I love discovering a new restaurant with my husband because I love one-on-one dinner dates. One I’ve recently discovered—it’s been around for a while, but it’s a new one for me, is Giancarlo’s on College Street. It is really good Italian food, really authentic. We also recently fell in love with Lolita’s Lust on the Danforth. We love the tried-and-trues too, Sotto Sotto, that’s one of our favourite restaurants.

We have very long dinners, three and four-and-a-half hours long. On my schedule, I get very hungry, very early. I’m telling you I’m like an 80-year-old. We’re the first ones in the restaurant with the bartender!

Being Italian, I’m so picky about risotto and pasta dishes, that with the exception of Sotto Sotto I won’t order those when I’m out for dinner. What I do like is a nice fish dish. I’m terrible at making fish dishes on my own. I don’t know how you don’t dry fish out! Ciao Wine Bar of all places has a delicious market fish that they do. They stuff it with herbs and roasted potatoes and rapini and just grill it beautifully with a little bit of olive oil, parsley, garlic and salt and pepper. It’s really nicely done there. Something I can’t do at home is what I usually go for.

And then after that our new thing because we don’t have kids is to go for drinks to somewhere like One at The Hazelton. It’s always great to just sit there and see all these people just go on about their evening. It’s a fascinating bunch there! We’re like, ‘where do these people come from?’ It’s such an eclectic cast of characters. We’ll just recede into the shadows and sip on our cocktails and play the ‘What does that guy do?’ game. ‘What’s that guys business?’ ‘What’s he all about?’ We like that.

The night ends with rolling into bed and then snore, snore, snore! But if it’s a UFC night, we may watch it on PVR. My husband got me into UFC. People think it’s such a violent sport but it’s not. I’m all about the UFC match with George St. Pierre at Rogers centre in April! It’s a date. We’re going with my sister and her husband. George St. Pierre is the Gretzky of the UFC.

That’s a very full Saturday! At some point I’ve got to go to Costco and get my groceries….