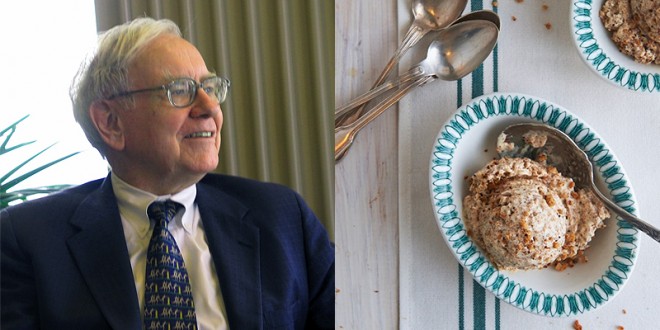 The news: Warren Buffett eats like a child, is living the dream. The 84-year-old Berkshire Hathaway CEO (and card-carrying member of Forbes‘ billionaires club) recently told Fortune‘s Patricia Sellers that he is “one quarter Coca-Cola,” downing three Cokes during the day and two at night. Buffett occasionally pairs his fizzy fountain of youth with Utz Potato Sticks, and he’s also been known to forgo toast for ice cream at breakfast. “I checked the actuarial tables,” said Buffett, “and the lowest death rate is among six-year-olds. So I decided to eat like a six-year-old.” If a high-salt, high-sugar, high-fun diet is truly the secret to a long, lucrative life, we’ll have a quintuple Coke float, please.

The dish: Sweet brown-bread ice cream — a socially acceptable compromise between breakfast and bedtime snack. Get the recipe here.