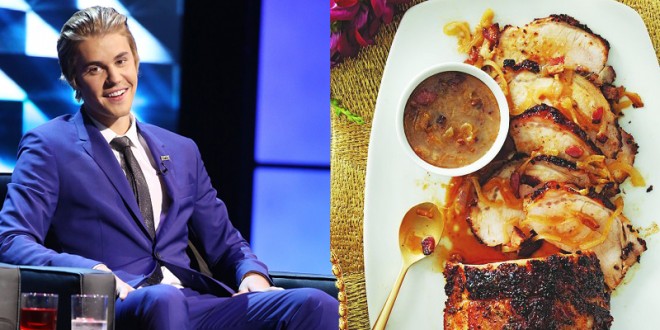 The news: Justin Bieber’s Public Remorse Tour is now well underway, but that hasn’t stopped a few famous funnymen from absolutely skewering his antics on the Biebs’ very own Comedy Central Roast (airing tonight at 10 on The Comedy Network). Comedians Kevin Hart, Will Ferrell and Chris D’Elia certainly don’t shy away from Bieber’s sketchy adolescence during the two-hour telecast, ripping his DUI arrest, on-off relationship with Selena Gomez, and even his wispy new moustache. (A sample joke from D’Elia’s set: “You have it all, except love, friends, good parents and a Grammy.”) For his part, Bieber is lowered to the stage wearing giant angel wings, so at least Canada’s once-prodigal pop star is in on the joke.

The dish: Roast pork loin with bacon-cider gravy — perfect for the mature, over-21 cohort, of which Bieber is now a member. Get the recipe here.