Having lost the ability to hop on planes and trains during the pandemic, many of us finally began to appreciate the beauty in our own backyards. 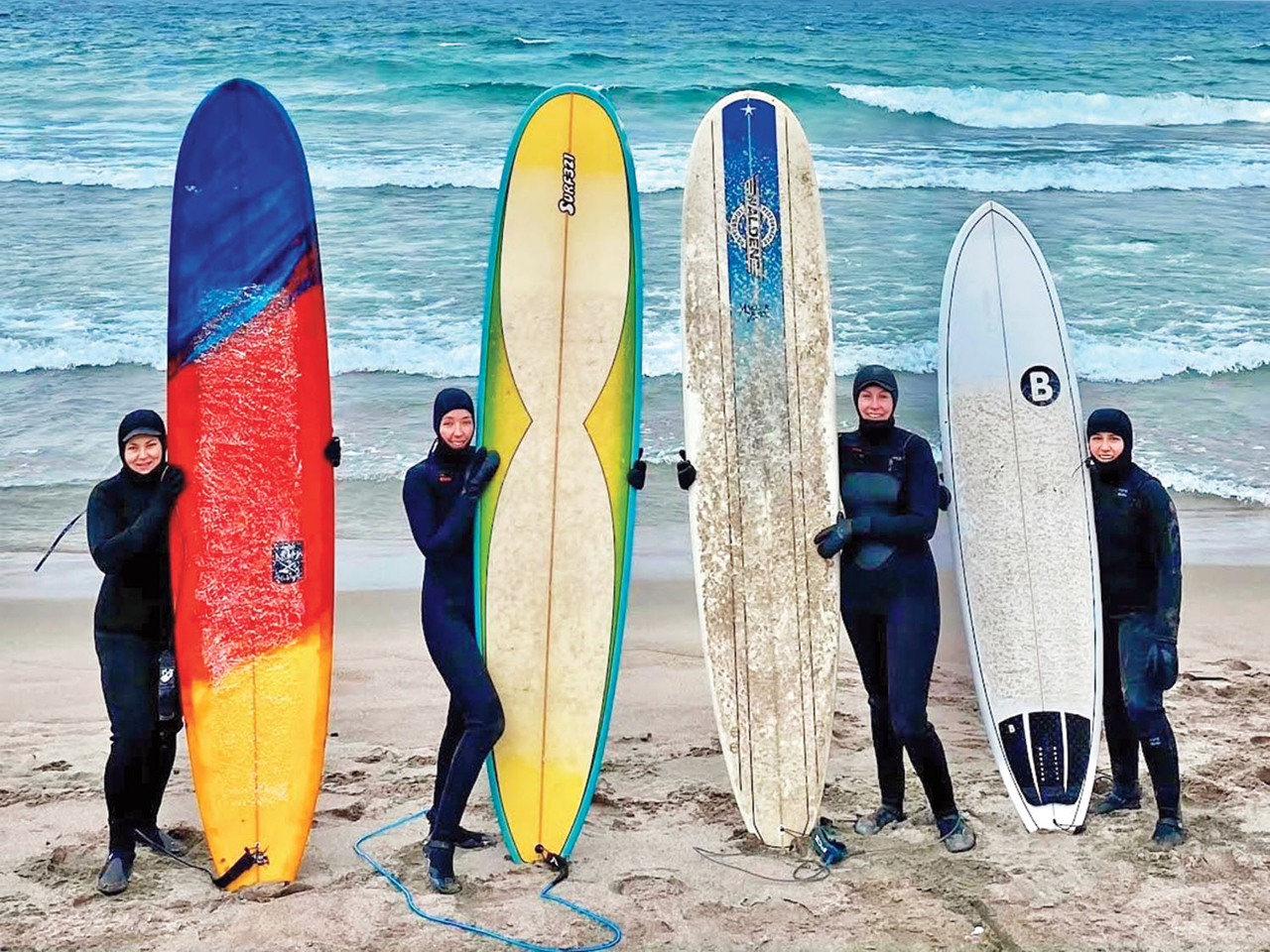 For more great escapes, read our sister piece: 12 Amazing Things To Do Outdoors In Western Canada (Including A Bit Of Florida… In The Prairies)

I’m really fortunate to have grown up in Terrace Bay; it’s a little hidden gem in Northern Ontario, situated on the north shore of Lake Superior. I’ve always felt like I have a special connection to water from spending days boating and fishing with my family.

A couple of years ago, I moved back home and really noticed surfing was a growing sport; the idea of surfing on the Great Lakes was something I didn’t know we could do in our corner of the country. But it seemed so male dominated to me, and the frigid cold and the force of the lake were intimidating.

Once the COVID-19 pandemic hit, I was looking for an outlet. I saw a lot more women getting involved with surfing, and that was really my push into it. I was drawn to how powerful they looked on the lake. I was craving a connection to nature, and to the community that was growing in front of me. So I slipped into a wetsuit, got on a surfboard and ventured out to get to know the water and the tides in a whole new way.

The first couple of times, there was a lot of frustration. When you see other people surfing, it kind of looks simple. In reality though, when you first try it yourself, you get barrelled all of the time. We’re talking sand, sometimes snow, in your face and water in your mouth. I did have this “aha moment” a couple months in. That first time you get up on a wave and have the perfect surf line is the most magical experience of your life, and that’s when it becomes an obsession. I definitely wear many hats as a mother and a nurse, but when I get in the water and get surfing, everything else shuts off. It’s where I can find a bit of release and quiet through this complicated time, where it’s just me and the water.—Cassidy McLean, Terrace Bay, Ontario (as told to Olivia Levesque)

By May 2020, each photo of a shimmering lake on social media gave me a twinge of jealousy. With everything closed, life had turned monotonous, but I was stuck. My city was an early virus hot spot, and I didn’t want to risk bringing COVID-19 to smaller towns.

My girlfriend and I decided to explore our own neighbourhood and downloaded iNaturalist, an app that allows users to upload photos of flora and fauna and geotag the locations, so that others can find them. We were shocked by how much wildlife surrounded us. My typical brisk gait turned to a gentle stroll as we scanned sidewalks and flower beds for creatures and plants we’d never thought to look for: shaggy scalycap mushrooms, red-winged blackbirds and eight-spotted forester moths.

But the double-crested cormorant proved elusive. After noting that they’d been seen nearby, I began inspecting every body of water I crossed for their snaky necks and electric-blue mouths. Throughout the summer, I spotted minnows and ducks and even crawfish, but no cormorants materialized.

Then, one September afternoon, my friend Paige slowed to a stop as we cycled along the Lachine Canal. She pointed across the water. “There it is,” she said, “the cormorant.”

As I watched its sleek, dark body bob on the choppy water, I felt the thrill of something new.—Ziya Jones, Montreal, Quebec 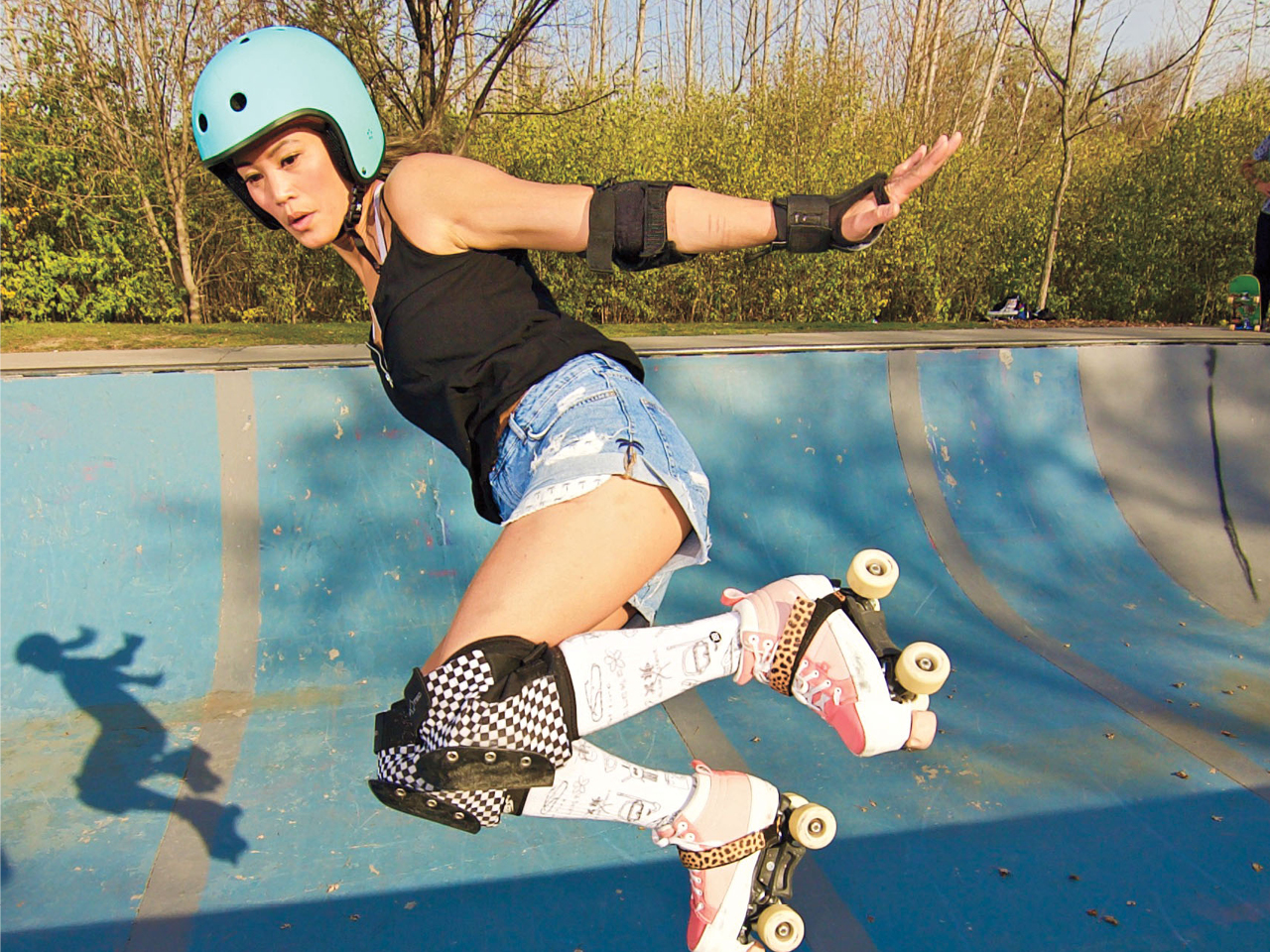 Learn how to roller skate

Just before the first lockdown last March, during a Muay Thai sparring session, I was punched in the face so hard that my orbital floor broke and I suffered double vision and a concussion. That traumatized me. I needed a new hobby. I was seeing a lot of roller skaters on Instagram, so I bought skates.

The first time I drove to the skate park, I sat in my car for a long time. I really had to push myself to get out. An older man was just ripping around the bowl, and I kept thinking, “Is he going to be looking at me and be like, ‘What is she doing?’” I got over that fear. Now when I go to the skate park, I don’t care who’s around.

I was a 100 percent beginner on roller skates, but my experience rollerblading and ice-skating definitely helped. I also went roller skating daily for an hour and a half while my one-year-old son, Jaden, was napping, so I progressed quickly.

My biggest success with a trick has been the backside stall, where you go up to the coping [the rounded lip at the top of the ramp] and land a 180-degree turn. It took me two months. There’s something about hurting myself on the coping, especially shin-on-coping, that really scares me. I kept trying it step by step. I watched a lot of videos on YouTube and footage of myself attempting the trick. A big part of it was just committing, but when I got it, oh my gosh, it was liberating. There’s just something about that feeling of getting over a fear. And after landing a trick like that, it opens up so many more doors to tricks I can do.

I’m now pregnant and I’m still skating. I worry about people judging me, especially now that my belly is showing, but I know my body best.

I also know that this time to skate is time I need so I can be 100 percent mentally there for Jaden—and, eventually, for my new baby, too—outside of the skate park.—Elly Pham, Toronto, Ontario (as told to Saira Peesker) 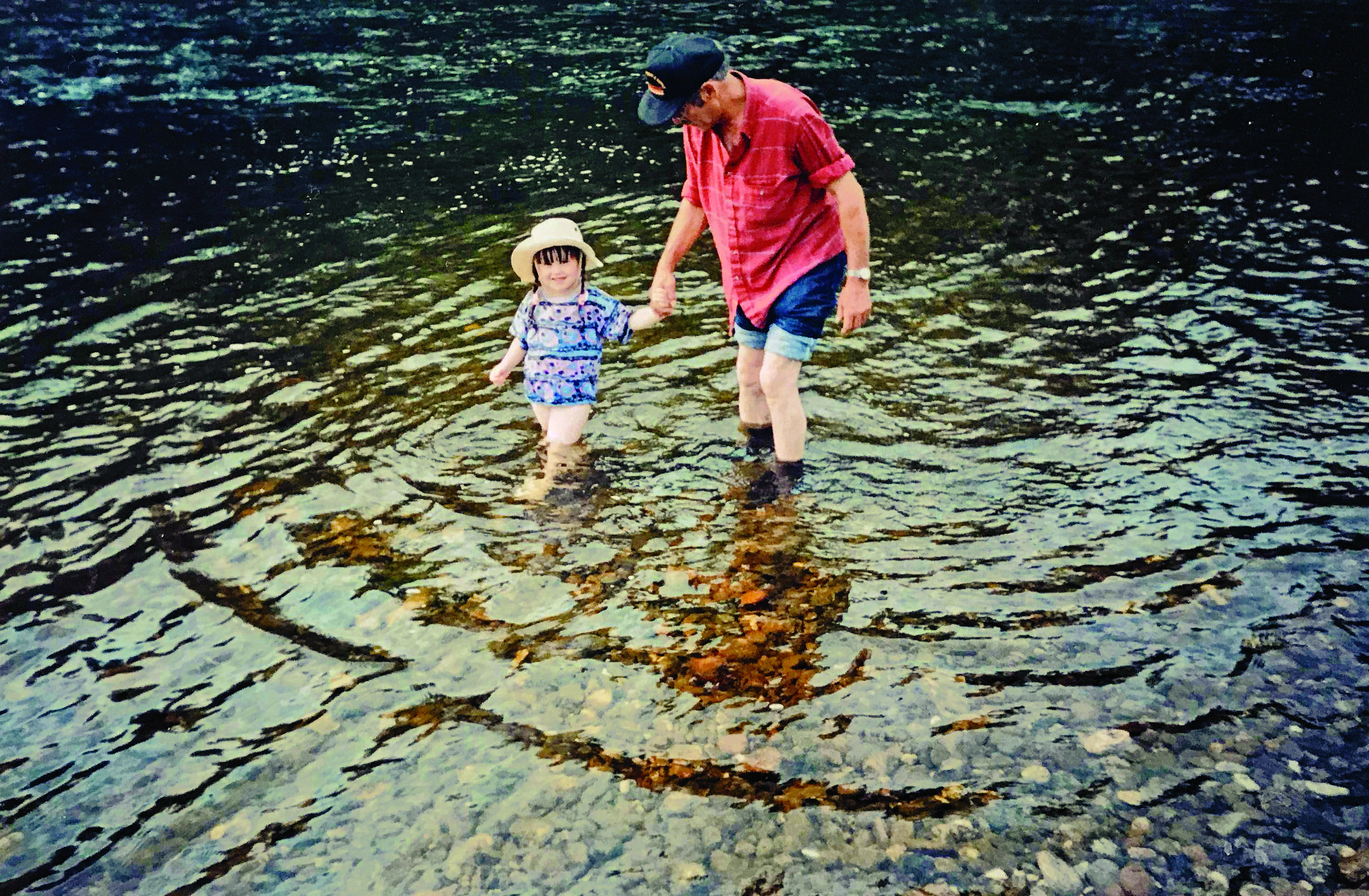 Dip into the past in the Miramichi River

One afternoon last August, it was so hot that the sunlight was sticky and golden like corn syrup. Blackflies droned above, delivering a trill that egged me on. Even in the heat, I knew that the Miramichi River would be so cold it hurt, which felt more like a promise than a threat. Cool relief awaited me in the river—so long as I didn’t chicken out.

Being brave was never my bag, but it was my grandma’s. She was a granite shoulder held up to the wheel of the world; a titan at five feet tall. That day was the day of her funeral, and COVID-19 meant we hadn’t seen each other for a year before she died. I couldn’t fathom how to be strong without her, so here I was, in her favourite place, the only spot I could think to go after the burial: down over the hill at the water’s edge, past the rural community hall in her small New Brunswick town.

The last time I navigated the banks of the Miramichi, I was a kid, slicing the river’s current with my limbs—a rough doggy-paddle— while she and my grandpa kept watch from the shore. Our summer ritual, these trips to the river taught me to swim upstream in life, too. That day, I was desperately reaching a hand backward in time, to something easy, something safe. I submerged my toes in the icy water. I winced. Then I waded in anyway.—Morgan Mullin, Sillikers, New Brunswick 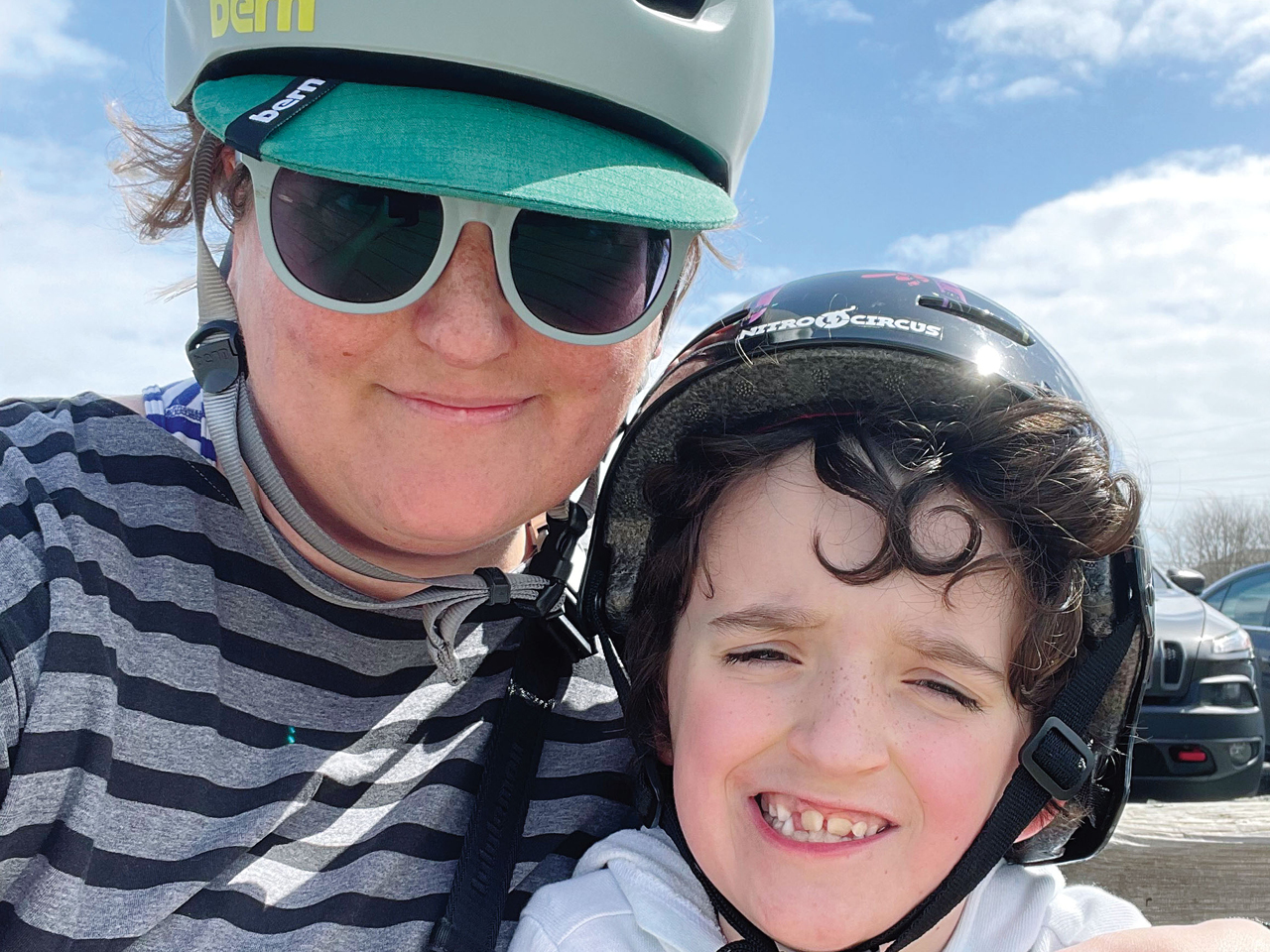 Hit the road on a bike

When I was eight, I was hit by a car while riding my bike. I wasn’t hurt—in fact, I just got up and went on to class. But somewhere along the way, I became more fearful on two wheels.

As an adult, I spent nearly a decade living in Toronto but never bought a bicycle. Many horrible bicycle deaths—including those of bike courier Darcy Allan Sheppard and Jenna Morrison, who was five months pregnant at the time—happened while I lived there. I would stick to streetcars and my feet, thanks.

I didn’t consider changing this when I moved to St. John’s. But last year, after two months stuck inside with my bored seven-year-old son, I made an impulsive pandemic purchase: a bike. It would get us outside together, I reasoned, and motivate my son to learn to ride his own without training wheels.

I was right. It took a few days and some tears, but with a little help from a neighbour and patience I didn’t know I had left at that point, he got there. We started riding around the pond across from his school almost daily. I avoided looking at the school building—it was empty, and the parking lot was being used for COVID-19 testing. Instead, we focused on the ducks in the pond, the changing foliage and the dogs we passed on their walks.

Soon, St. John’s opened up more, and we went farther afield. It took a while to get comfortable riding on the road, and I planned my trips to avoid a few of the busiest streets. But my son kept trying when he couldn’t ride his bike, so I kept trying when I felt unsteady on mine.

We brought the bikes out again a few weeks ago and rode around the pond—last year’s ducklings are grown up, and the pussy willows were out. We were shaky at first but regained our balance quickly. It felt good to look forward to summer.—Terri Coles, St. John’s, Newfoundland 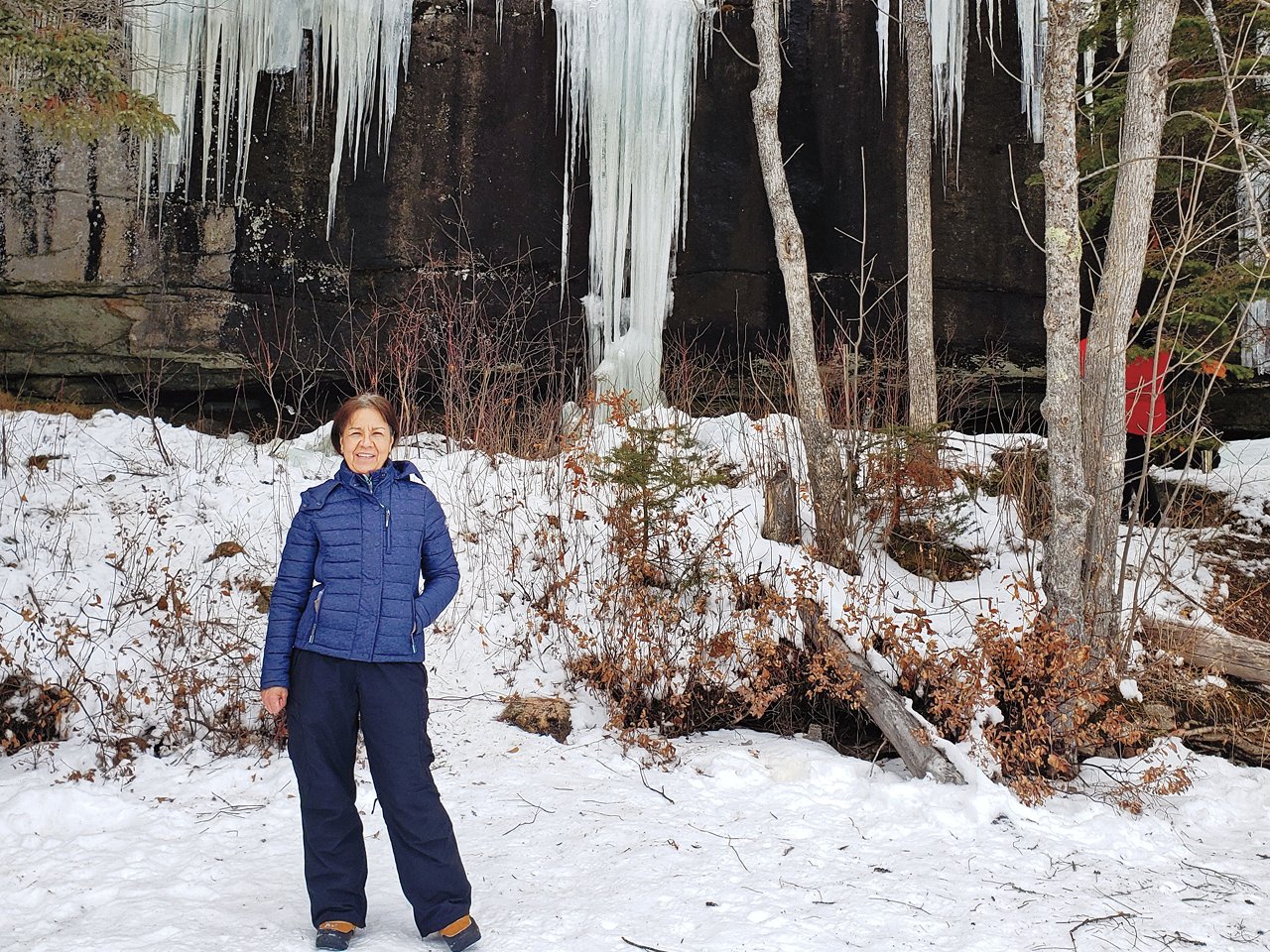 Last winter, a friend showed me pictures of beautiful ice waterfalls next to a majestic ridge. The pandemic had been long and lonely for me, and I needed an outdoor adventure to recharge and lift my spirits. Plus the name of the place was irresistible—Forgotten Lake. I set out to find it myself.

I drove north of Kenora, Ont., getting lost in Redditt, population 153, along the way. Eventually, I saw some vehicles parked on the side of English River Road, so I parked there, too. A group of youths pointed toward a hidden trail. I began walking through the bush, nurtured by soft winds and swaying trees.

Once the trail ended, I could see a wide open lake, but not the falls I was searching for.

When in doubt, I usually go left: I stopped to offer tobacco and prayers of gratitude for this beautiful land and healthy life, then stepped onto the frozen lake.

A family walking toward me assured me I was on the right path. The ridge appeared, and I looked up and thought of our Anishinaabeg ancestors, living here in a different time.

I wondered what the view was like from those cliffs back then. Could this be a sacred place with historical significance? I kept walking, rounded a corner and there, off in the distance, was a wall of unmoving water. I had found the ice waterfalls of Forgotten Lake.—Sherry Moreau, Kenora, Ontario