Loving Cleo changed me in all the very best of ways. 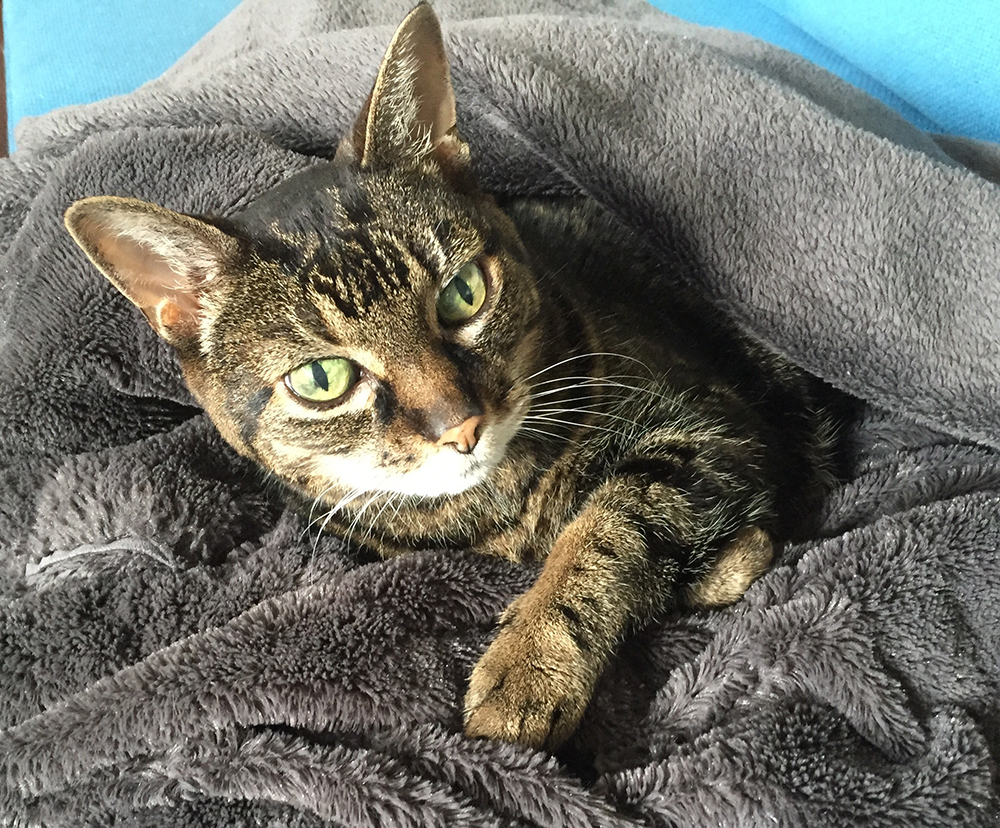 Cleo’s journey to me began on a summer’s day in 1995. It was just like every other day that summer, except a field mouse made an appearance in the bathroom while my mum was perched on the toilet.

Much commotion ensued. It was decided then and there: We needed a cat.

My dad asked around at work and, luckily, a secretary was harbouring a batch of kittens in her barn. We agreed to take the runt of the litter.

When Cleo arrived at six weeks old, she weighed barely half a pound. I was 10, about to enter Grade 6, and remember snuggling her under my shirt, trying to feed her a bottle.

In hindsight, it’s obvious why I was such a sucker for her underdog story. A decade earlier, I was born to a young, single mother unable to care for me. She relinquished me to the state, which placed me up for adoption. My new family lived 800 kilometres north of where I was born, but just a few miles from the barn where Cleo would end up duking it out with her brothers and sisters.

If she was disadvantaged at all from her start in life, you wouldn’t have known it. In her younger years, Cleo pulled down the Christmas tree and the curtains with a regularity that made my parents question their decision to adopt her.

She roamed free around our house on the edge of a remote Alberta town, regularly dropping mice on the front step, thus fulfilling her assigned duties (aside from that one time she dropped a half-dead mouse on the shoe rack). My dad was convinced she fought off a hawk, based on the talon wounds she ambled in with one morning. In those days, it was a rare treat to wake up to her head on my pillow.

Cleo was spirited, affectionate, enigmatic, but really she could be anything we wanted her to be. Later in life I came to realize pets have a way of filling whatever voids we need them to. If we’re lonely, they offer us companionship. If we’re misunderstood, they offer understanding. If we fear we’re unlovable, they love us anyways. As a teenager, I was all of those things. 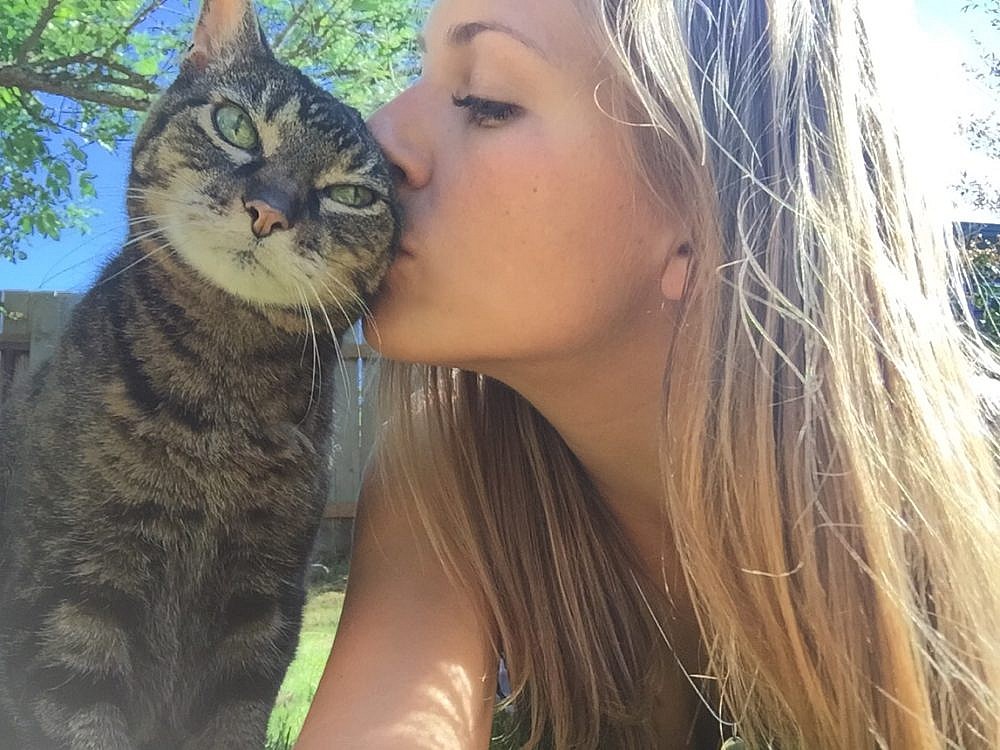 Emma and Cleo in the backyard in Victoria on Cleo’s 20th birthday.

Cleo had an uncanny way of appearing on my bed and licking clean my tears. She was by my side when I realized I may never look into the face of someone who shares my blue-green eyes or learn the origin of my olive skin. In a world in which so much felt slightly off, it seemed Cleo was made just for me.

We spent 10 years apart when I went off to college, but we were reunited for what I like to call “the retirement years.”

Cleo was 17 at the time. We had both grown up and had more love to give. She moved in with me, her head now a constant on my pillow. Soon she needed stairs to get onto the bed.

In our decade apart, I’d turned into a busy professional, pragmatic to a fault—and yet, I thought nothing of her waking me up countless times a night.

Like so many people, I had become stuck in the cycle of being “busy”; life somehow turned into a steady string of commitments. Though I had a hard time envisioning how children could fit into the chaos, my life readily morphed to fit a geriatric cat.

I found myself turning down social events, wanting nothing more than to be at home with Cleo asleep on my chest, snoring lightly in my ear. I’d stay still for impossible periods of time as my neck stiffened and my bladder filled. She’d burrow her nose under mine and I’d inhale her exhales.

Soon, the incline of Cleo’s stairs became too steep, so my dad built her a new set from scratch in his shed. They stuck out about half a metre from the bed. We dubbed it “the royal staircase,” which seemed to soften the blow every time my boyfriend stubbed his toe on the way to the bathroom.

Her smell: a mix of cat food and fur and duvet cover. Her nose felt like velvet. She had this way of collapsing perfectly into the nook of my arm and exhaling with a heavy purr.

I knew the sound of her entering a room off by heart. First, the click-click-click of her right hip—like a tired grandfather clock that occasionally skips a beat. Then the whistling, her lungs heavy, gurgling and growling, almost like a gremlin lived inside of her. 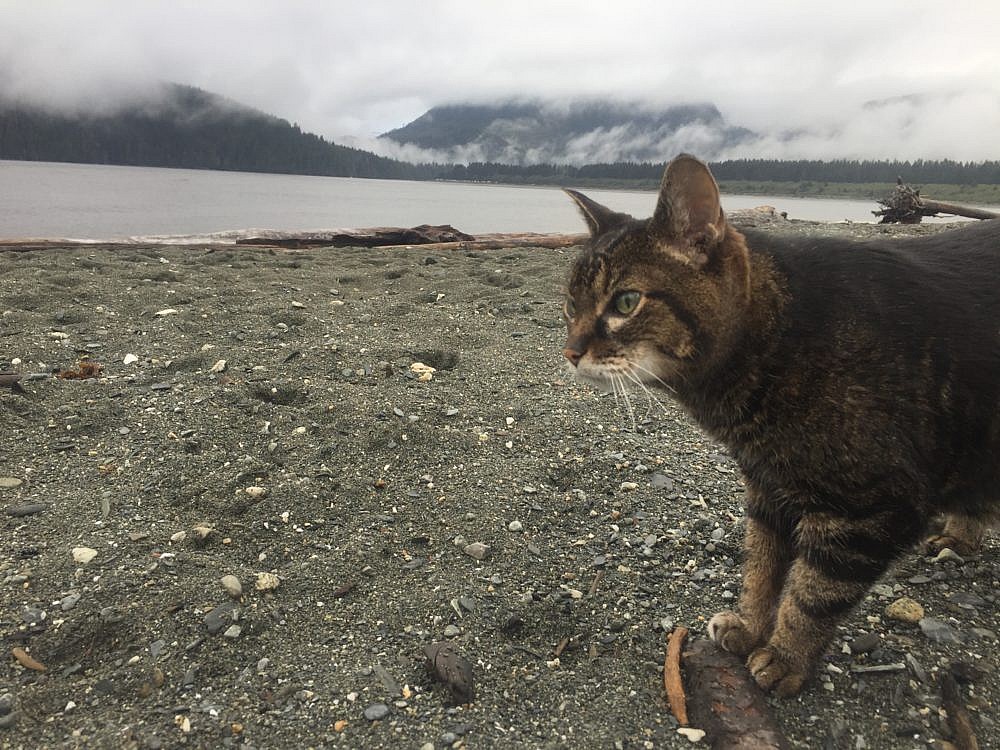 In her final months, I started taking Cleo with me everywhere, and this was the first time she saw the ocean, in Port Renfrew, B.C.

Our vet was continually amazed by Cleo’s good health, saying if she didn’t know any better she’d have guessed she was 12 in her 22nd year. I looked up the Guinness World Record for oldest living cat and as recently as 2013, a 23-year-old feline held the title. We had a chance.

But on the day Cleo turned 23, everything changed. She started having seizures and, after a flurry of vet visits, we learned they were likely caused by a brain tumour.

I cancelled a back-country hiking trip, stayed home for the rest of the summer, and tried every alternative therapy under the sun: acupuncture, Chinese herbs, CBD oil.

We eked out a blissful three-month seizure-free period, and then she relapsed. I came home from a surf trip and she was a different cat—weak, confused, barely able to ascend the royal staircase.

The end is a blur of memories, most of which I wish I could forget. Giving her a bath in the middle of the night after she peed herself (she purred as the warm water hit her skin), watching her struggle to walk (I cried), covering the mattress in absorbent pads (anything for Cleo), hearing her hiss at me for the first time (the moment I knew it was really over).

Cleo had reached 111 in cat years, and it appeared our extraordinary run was over. 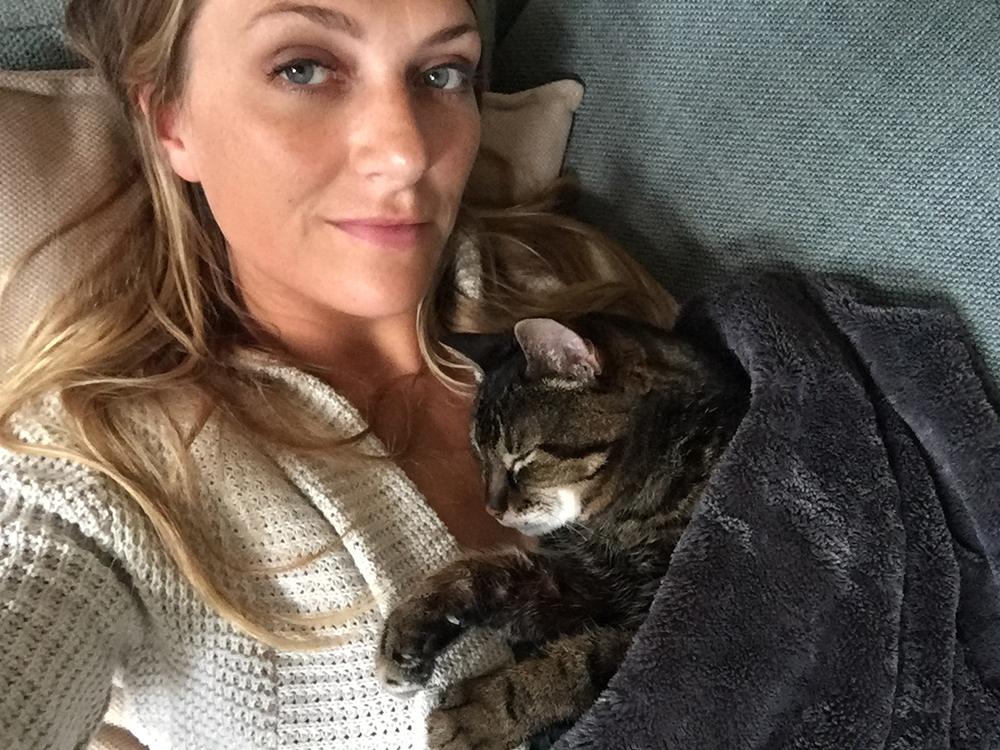 One of Cleo and Emma’s last photos together, in the week before they said their goodbyes.

The morning before we said goodbye, she bounded up the royal staircase onto the bed, landed her wet nose on mine and cleaned my face. I’ve never savoured a moment more in my whole life.

The next day, after another seizure, I called our vet and asked her how to decide when it was “time.” She said to just be with her and listen to what she wants. I signed off from work, curled up in bed with her on my chest and asked if she was ready. About an hour later, she projectile vomited and had the most horrifying seizure I’d ever seen. It was time.

I spent the afternoon on the bedroom floor with her. I put on my thickest socks, filled a hot water bottle I’d had since childhood and tucked her under the blanket on my chest. I’m not sure who I was comforting—me or her.

When I packed her into the car, wrapped in warm towels, she mercifully didn’t wake up. The song “Shallow” from A Star is Born started playing on the radio as I pulled up to a traffic light. “I’m off the deep end/watch as I dive in /I’ll never meet the ground.” The light turned to green. “We’re far from the shallow now.”

And then it was over, just like that. The moment I’d been dreading for a third of my life. I came home and robotically cleared away her things. No more water glass on the floor by the bed. No stairs to stub our toes on. No Chinese herbs on the counter. No hip clicks or the sound of her breathing. I could barely eat for four days.

In the days after Cleo died, I clung frantically to the physical evidence of her. I backed up all my photos twice. I texted my parents, asking them to remove her litter box and then panicked at the thought of them discarding it, realizing I could use it as a flower planter. I woke in the middle of the night, gripped by the realization I didn’t have a video of her dipping her paw in my water glass.

She was everything I’d ever loved. She was homemade chocolate chip cookie dough and the feeling of sun on my face and the faint memory of my mum singing to me in her rocking chair.

I dreamt of Cleo night after night—her wet nose dabbing my face; finding her in the guest room and realizing she hadn’t died after all; giving a eulogy for her at a memorial hosted in my high school gym.

Most of my friends empathized with how hard it can be to lose a pet, but others didn’t get it. Some people didn’t even acknowledge my loss, which left me reeling not just from losing my companion since childhood, but also questioning my right to feel sad in the first place. I knew the world was full of such greater tragedy, but I also knew that losing Cleo felt like cutting my heart out of my chest.

My grief was disorienting and alienating. And yet, I found myself feeling clearer than ever about what I wanted in my life. I became kinder to myself and felt my heart opening to friends and family in new ways.

Three months after Cleo’s death, on a gloriously sunny spring day, I was sitting in my doctor’s office. After 20 years on the birth control pill, I was finally ready to talk about going off it. All the messiness and hardship of having children had begun to look less daunting and more worthwhile in Cleo’s wake.

Cheryl Strayed, the author of Wild, said on her advice podcast that the gift of grief is how it changes you.

It was hard to see at first, but it’s clearer now. Loving Cleo—and losing her—changed me in all the very best of ways. She taught me to slow down, to be tender, to make time for the people who matter. She taught me that when we run out of heartbeats, how much we loved is all that counts.

When it came time for Cleo and I to say our final goodbyes, all I could say was: thank you. Thank you for 23 years and six months. Thank you for comforting me through some of the ugliest moments of my life. Thank you for showing me the best parts of myself. Thank you for teaching me how to love.