How Much Should You Really Spend On A Pair Of Winter Boots?

Insider tips on what to look for in your winter footwear to get the best buy for your buck. 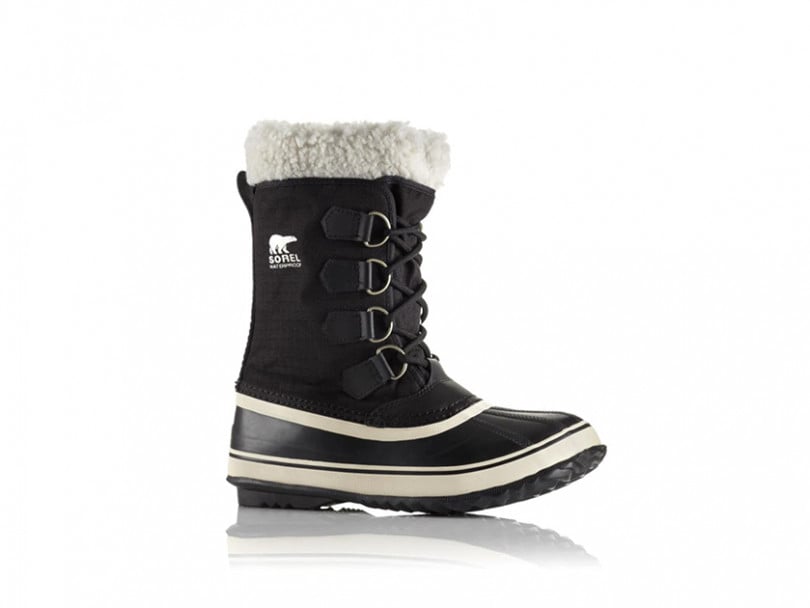 Because Canadian winters are so long, we’re in our boots for months at a time–usually wearing them daily—so they better last. But juggling practicality and style is no easy task—is it too much to ask for toasty toes and stylish options?

Before hitting the mall, I called Shannon Smith, who co-owns The Shoe Tree in Moncton, N.B., with his wife, Alison. In business for 25 years, and in an area of Canada with the average winter snowfall of 282 centimetres, I figured he’s someone who really knows his galoshes.

I was also hoping he’d shed some light on what boots should cost. After all, the price for women’s winter boots seems to be all over the map. Cheap and cheerful Canadiana Women’s Crystal boots cost less than $60 right now. A pair of Sorel boots sporting faux fur might set you back $135, while Roger Vivier Viv Run Crystal Buckle snow boots run an astonishing $1,787.

“I’m not saying the price of the shoe is always a reflection of the quality of the shoe. That’s certainly not the case,” Smith starts. “But you do tend to get what you pay for.”

According to Smith, while a cheaper pair under $100 probably won’t last long (and will eventually force you to go out and buy another pair), paying between $100 to $200 will likely get you a quality boot. He recommends brands such as Rieker, Clarks and Rockport, which, to his experienced eye, balance price and quality.

So how can you tell if the boot you’re holding is actually a quality item? Give it a squeeze and a twist, advises Smith. “If I can pick it up and fold the toe all the way back to the heel with relative ease, there’s probably not much support there,” he says, mentioning that an easy lateral twist also proves the boot probably doesn’t have a supportive shank inside. Don’t forget the outsoles. The bottom of a good snow boot is often made of 100 per cent waterproof material, such as rubber, which is actually cold-friendly and flexible even in sub-zero temperatures.

And speaking of keeping feet warm and dry, it’s also a good idea—unless you’re in the market for a vegan, non-leather shoe—to go for a full grain leather upper since it lasts longer and it can be waterproofed more easily. Check out the stitching for frayed thread or anything that looks a little dodgy, too.

And give that zipper a good yank. If it’s sticky in the store, you’ll likely encounter problems down the road, says Smith. It should move up and down with ease. In fact, when it comes to buying boots, a zipper can tell you a lot about the product’s quality. “If the zipper used in the process is a cheaper one, there’s a good chance that the rest of the materials used in the manufacturing process were cheap, too,” he cautions.

Here are a few more issues to consider.

Think about your safety

Not only do good boots have to be warm, long-lasting and stylish, they should also keep you upright even on slippery slopes. Unfortunately, not many boots today make the grade—according to research done at the Toronto Rehabilitation Institute, which tested nearly a hundred pairs of boots, only 26 percent met its requirements for safety on both wet and cold ice. Researchers created both bare ice and melting ice conditions on an angled “hill” to simulate challenging outdoor surfaces Canadians encounter in the winter. Boots by Sperry and WindRiver were winners. Considering that falls are among the most common causes of death and injury in Canada, it makes sense to go for boots that offer both good treads and ample support.

Having more than one pair of winter boots and rotating them will help your favourite pair last, says Smith. With less wear comes less tear. So does protecting them with waterproofing spray and a good wax-based product like Sno-Seal.

If you’re looking for a good deal on winter boots, be prepared to wait until January or February for the prices to drop. Otherwise, it’s best to shop early (think September through early November), particularly if you’re a common size seven, eight or nine. Stores typically buy their stock eight months in advance and don’t “fill in” for seasonal items later as the inventory gets sold.

“Come in and see us for boots early,” says Smith. “If you wait until the snow flies, they’re probably already gone.”