Riveted by one of the band’s songs, I grew into a full-fledged BTS ARMY. 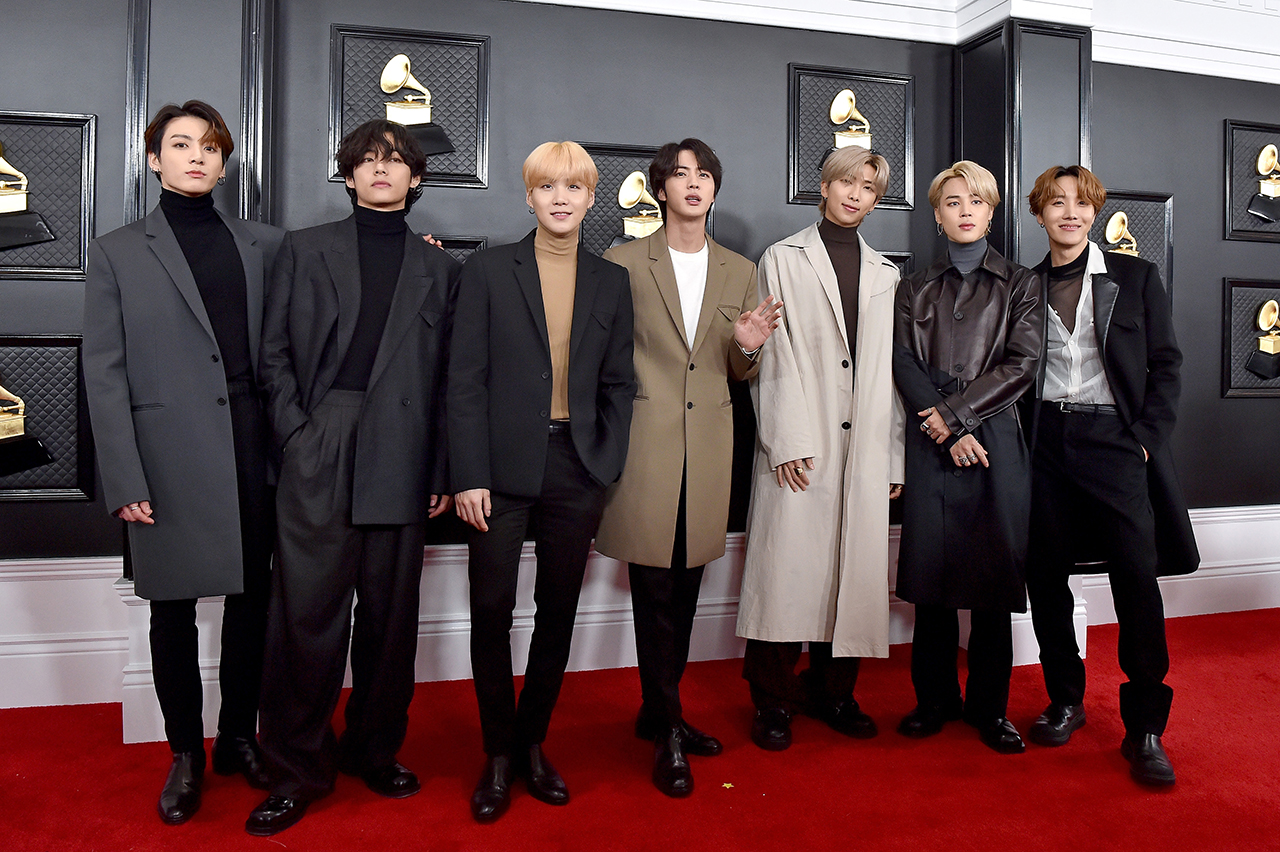 BTS at the Grammys in 2020. (Photo: Axelle/Bauer-Griffin/FilmMagic)

While watching a video of K-pop supergroup BTS performing their song “Idol” in front of a historic royal palace in Seoul last fall, I became unreasonably sentimental.

My throat tightened, my eyes began to twitch, and tears pooled along the rim of my lower eyelashes.

“Snap out of it Vivian, what’s the matter with you?” I shouted at myself silently. I was alone that day, at home in my Paris apartment, watching their YouTube performance for The Tonight Show, but I was still embarrassed and surprised by my own reaction—and not just because I’m a grown-ass woman in her 40s.

As BTS fans know, “Idol” is not a ballad nor particularly sentimental. The lyrics don’t even resonate with me all that much; the song is about the group standing up to their haters. Nor is it my favourite BTS song by any stretch.

But as the camera panned out and I watched the seven members of BTS dance in traditional Korean hanbok-inspired costumes against the royal Gyeongbokgung Palace in South Korea, I began to understand why I was getting so sappy; it was my deep gratitude for what the seven young men have done for the Korean diaspora around the world, particularly for older second-generation Gen Xers and Xennial Koreans like myself.

I grew up in suburban Ontario in the 1980s and ’90s at a time when Korean culture barely registered a blip on the Canadian radar, except perhaps to reinforce stereotypes of Koreans running laundromats and corner convenience stores. Beyond that, little effort was made to see us separately from other Asian groups and we were regularly mistaken for being Chinese or Japanese. But in the last five years or so, BTS’ meteoric success has helped inspire an unprecedented amount of interest in Korean culture—our food, language, history—leading some of us, like myself, who had complicated relationships with our Korean-Canadian heritage, back to our Korean roots.

And it’s not just me:

“For diasporic Korean youth, consuming K-pop seemed to be a process of
making sense of, and negotiating, who they are,” wrote cultural studies researcher Kyong Yoon of UBC Okanagan in his paper “Diasporic Youth Culture of K-Pop,” which was published in the January 2019 edition of the Journal of Youth Studies.

“Their initiation as K-pop fans influenced, and was influenced by, the reaffirmation of their ethnicity.”

His findings were based on interviews with 19 Korean diasporic young people under the age of 30 from Ontario and British Columbia.

One 21-year old interviewee described her surprise when she saw people singing and dancing to Psy’s 2012 hit “Gangnam Style” at her university festival in Toronto.

“It hit me like, ‘This is insane! We’re singing, we’re dancing to a Korean song right now!’”

But that song was a one-hit wonder. And, while K-pop has enjoyed a niche following outside of Korea for a few decades now, BTS has completely upended the global music industry as the first South Korean group to penetrate the mainstream music market when they topped the Billboard charts with their single “Dynamite” last year. They consistently break YouTube viewing and streaming records; landed a Grammy nomination; and boast a zealously devout army of international fans (aptly called ARMY)—all while singing in Korean.

Today, it’s absolutely mind-blowing to hear non-Koreans singing along in Korean to BTS songs, and to see fans—from Brazil to France and Canada to Saudi Arabia—waving the South Korean flag at the group’s sold-out stadium concerts.

To see a McDonald’s product emblazoned with Korean script as part of the group’s global partnership with the fast food giant is wild. To see the faces of seven young Korean men as the global ambassadors for Louis Vuitton’s men’s campaign is likewise remarkable.

And to see men and women, both young and old (a growing group of the BTS ARMY is actually made up of fans over the age of 35), swoon over South Korean men serves as a sharp reminder of the shamefully condescending and disdainful attitude I harboured towards my own culture for far too long.

I lived in Toronto for 15 years before moving to France, but I actively resisted joining the Korean Canadian community which I saw as a bubble centred too often around churches—a lifestyle I had renounced shortly after entering university when I started to question my conservative Christian upbringing. In an effort to distance myself from the church, I turned my back on my Korean culture, confusing these two identities. I willfully disengaged from my Korean roots, upholding beauty standards and cultural prejudices through what I now understand to be the white gaze.

But something happens when you move abroad as a dual-identity Asian. In Paris, where I’ve been living for the last 11 years, people see my Asian-ness first, before they see my Canadian identity. It was the nudge I needed to help me circle back to my Korean heritage.

So after years of snubbing BTS and K-pop as vacuous factory pop, my conversion into a full-flown ARMY surprised even myself. By ARMY standards, I am what they call a Baby ARMY, a newer fan having joined in 2020, seven years after the group’s debut.

On YouTube, I had stumbled across a performance of their hip-hop anthem “On” at Grand Central Station in New York and sat riveted by the artistic concept: the use of marching band beats, the energy, the conviction and powerfully executed choreography throughout the five and a half-minute performance. The lyrics speak to the members’ fears, trepidations and their ultimate reconciliation with their success.

Many ARMYs will tell you that’s often the way it starts: You come across a BTS video out of curiosity and then, with the subliminal guidance of YouTube algorithms, you’re led to more of BTS’s many stunning performances, before falling deep into the the rabbit hole. For the record, I’m not a big fan of their sugary, feel-good English-language hits such as “Dynamite,” “Butter” or their latest track, “Permission to Dance,” written by Ed Sheeran. I was seduced by the depth of the lyricism—their “Map of the Soul” albums “Persona” and “7” are named after and based on Carl Jung concepts and group members have writing credits—and musicality of their Korean albums. For instance, after “On,” the next song to seal the deal for me was the solo rap track “Daechwita,” by BTS member Suga, who goes by the alter ego name Agust D when releasing his mixtapes and tracks as a solo artist. As a YouTube video by DKDKTV points out, the cinematic video is steeped in historical symbolism and uses South Korea’s Joseon dynasty to tell an allegory of how BTS dismantled the entertainment hierarchy in Seoul during their rise to the top as a no-name group from a no-name music company, to their worldwide domination today. (The word “daechwita” refers to traditional Korean marching music played to announce the presence of royalty or military.) The DKDKTV channel is devoted to analysing news and trends in the Korean wave for English-speaking fans.

Meanwhile, between their own branded variety show Run BTS!, behind-the-scenes footage of the members on tour and at home, and the thousands of compilation videos created by their devout fans on YouTube and Facebook, there is no shortage of BTS content for ARMY to devour. But here’s the kicker: It’s all in Korean.

And this is where I admit, reader, that at times I feel quite smug knowing that here I hold the upper hand over non-Korean speaking fans: that as a Korean Canadian, I understand the nuances of their conversations and the cultural signposts of the members’ interactions more than non-Korean fans ever will. I can spot inaccurately translated captions that may mislead viewers who don’t know any better. And I laugh harder at their antics because I understand the Korean sense of humour, be it the clever play on words that can’t be translated, or the cultural references that would elude non-Koreans. In 2021, my identity as a Korean Canadian works to my advantage, even if it is just as a BTS ARMY.

That said, I’m also grateful to Generation Z kids and younger Millennials for being open-minded enough to make a South Korean K-pop group the biggest act in the world right now, and for recognizing talent when they see it—be it in English or Korean.

When I learned that British actor Simon Pegg became an ARMY after being converted by his daughter, I thought of my own friends in high school, with whom I have mostly lost touch, and wondered if some of their kids are BTS fans, and if they may have taught their parents any Korean words. Or if some of them remember that they had a Korean classmate at all.

Meanwhile, as an aspiring writer, I was especially buoyed to see Brazilian novelist Paulo Coelho, 73, author of the international bestseller The Alchemist, publicly declare that he, too, is an ARMY earlier this spring, in a tweet of support after BTS’s single “Butter” broke the Guinness World Record for the most-viewed YouTube music video in 24 hours with 108.2 million views following its release.

And so, at an age when I thought nothing could top my girlhood love for NKOTB (New Kids on the Block for any younger Millennial and Gen Z readers), I have unexpectedly become a loud and proud fangirl for a boyband half my age, in the second half of my life. But instead of helping me navigate teenage angst and unrequited crushes, BTS has helped steer me back to my Korean roots and navigate my multi-layered identity. And for this I say thank you.