'My legs hurt so bad': Meet the Canadian who ran the Boston Marathon — 8 months pregnant

'When I registered [for Boston] the following October and got my acceptance letter, I also got my positive pregnancy test — the exact same day.' 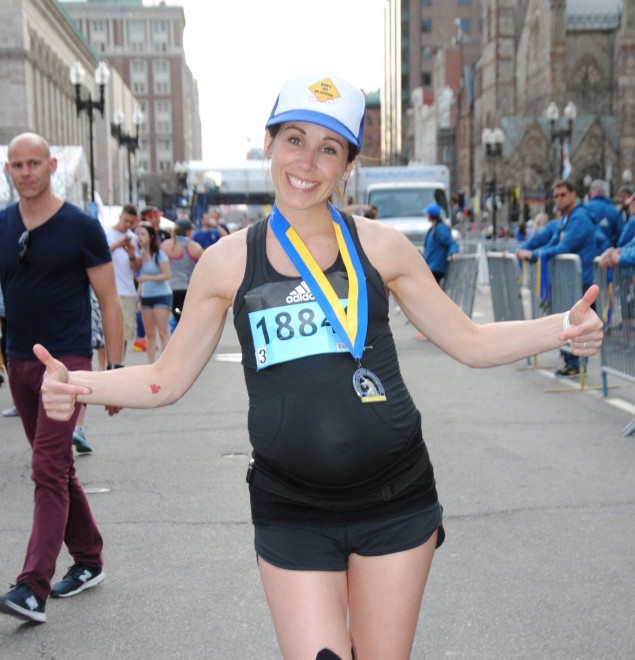 Tennis champ Serena Williams announced she’s pregnant last week, which means that she was in her first trimester when she crushed the competition at the Australian Open in January, earning her 23rd Grand Slam singles title. But you don’t have to be a professional athlete to accomplish a crazy feat while preggo: Julie McGivery, 36, had been training for more than a decade when she finally qualified for the race runners dream of — the Boston Marathon. In the year and a half between qualifying and the race, McGivery became pregnant with her second child. But that didn’t stop her. Chatelaine spoke with McGivery, who lives in Moncton, N.B., about what it was like participating in a gruelling race when she was eight months pregnant.

Tell me about the process to qualify for Boston.

I qualified in Toronto in 2014 after my daughter was born — she was 10 months old.  I brought my family with me because I was still nursing. So I nursed her, went and ran the marathon, nursed her again — it was like, OK, I better hurry up because my kid is going to be hungry. It was a tough marathon, because I trained on the treadmill — but it was my personal best time. It was the first time I qualified for Boston, so it was pretty exciting.

At the time, we knew we wanted another child but qualifying in October, at the end of 2014, means you don’t go the following April — you go the year after — so who knew where I would be in terms of growing the family at that point. And when I registered [for Boston] the following October and got my acceptance letter, I also got my positive pregnancy test — the exact same day. 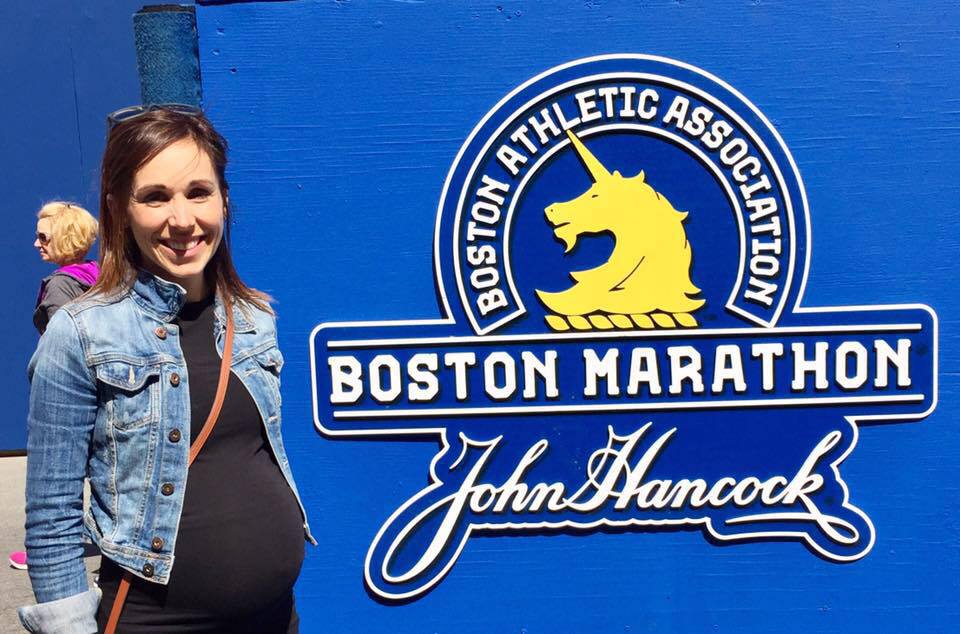 All 15 years I’ve been running I’ve been thinking, I wonder if I’ll get to Boston — and here it is. It’s very surreal. Of course I was nervous because I didn’t know what was going to happen but at least I got to the start, and I deserved it.

The first couple of kilometres were very emotional. [I got] so much support from runners around me and fans — you feel like a superstar when they’re cheering. Even an obstetrician ran by me and said, “I’m an obstetrician and I think what you are doing is awesome.” I didn’t hear anything negative. There’s a lot of negativity out there about people’s choices. If you’re pregnant, there’s still the mindset that you should just rest and not do anything.

Was there any point during the race you thought you weren’t going to finish?

Normally, at 35 km when you’re  not pregnant, you start to get really sore and your legs really hurt because you’re trying to give 100 percent — I hit that at about 10 km.

I didn’t sit down until 37 km. My legs hurt so bad I didn’t think I could make it with five km left to go. Five kilometres seemed like an eternity because if I walked that it would take an hour and that just seemed impossible. I was looking for a curb, just somewhere to sit — but the fences were all up. I saw a medical tent, they had two chairs sitting out front that were just calling my name and I went over and sat in the chair and the medical team came over and said, “Do you need medical attention?” and I said, “No, I just need to think, I just need a minute.”

I just had a self-chat about what am I really going to do here. Do I really need to quit here? Am I injured? No. Am I in pain? Yes, I’m in a lot of pain but it wasn’t an unhealthy pain — it was a normal running pain. Could I sustain this? Not really, but I couldn’t finish my story here, this isn’t how it would end after I’ve come this far. So after three minutes of self-loathing, I decided to get up and I never sat again.

What were you feeling when you crossed the finish line?

It was awesome. I know I can finish a marathon, but this time I didn’t [know], so it made it even better.

I’ll run Boston again [but] it’ll never be as gruelling. [It reminded me] that women can do anything. Back 50 years ago when the first women ran the marathon, it was unheard of. Women can run marathons and women are strong and being pregnant isn’t any different, as long as you’re safe.

I plan to continue to running the rest of my pregnancy — but maybe no more marathons.

More:
Everything you need to know about The Handmaid’s Tale before the show premieres
25 iconic Met Gala looks that we’re still talking about
Spring shoe guide: 48 affordable pairs that are perfect now and for summer