Do You… Hate Men Sometimes? Talking Misandry With I Hate Men’s Pauline Harmange

The French author explains why a ‘general, negative feeling’ towards men can be healthy and even helpful. 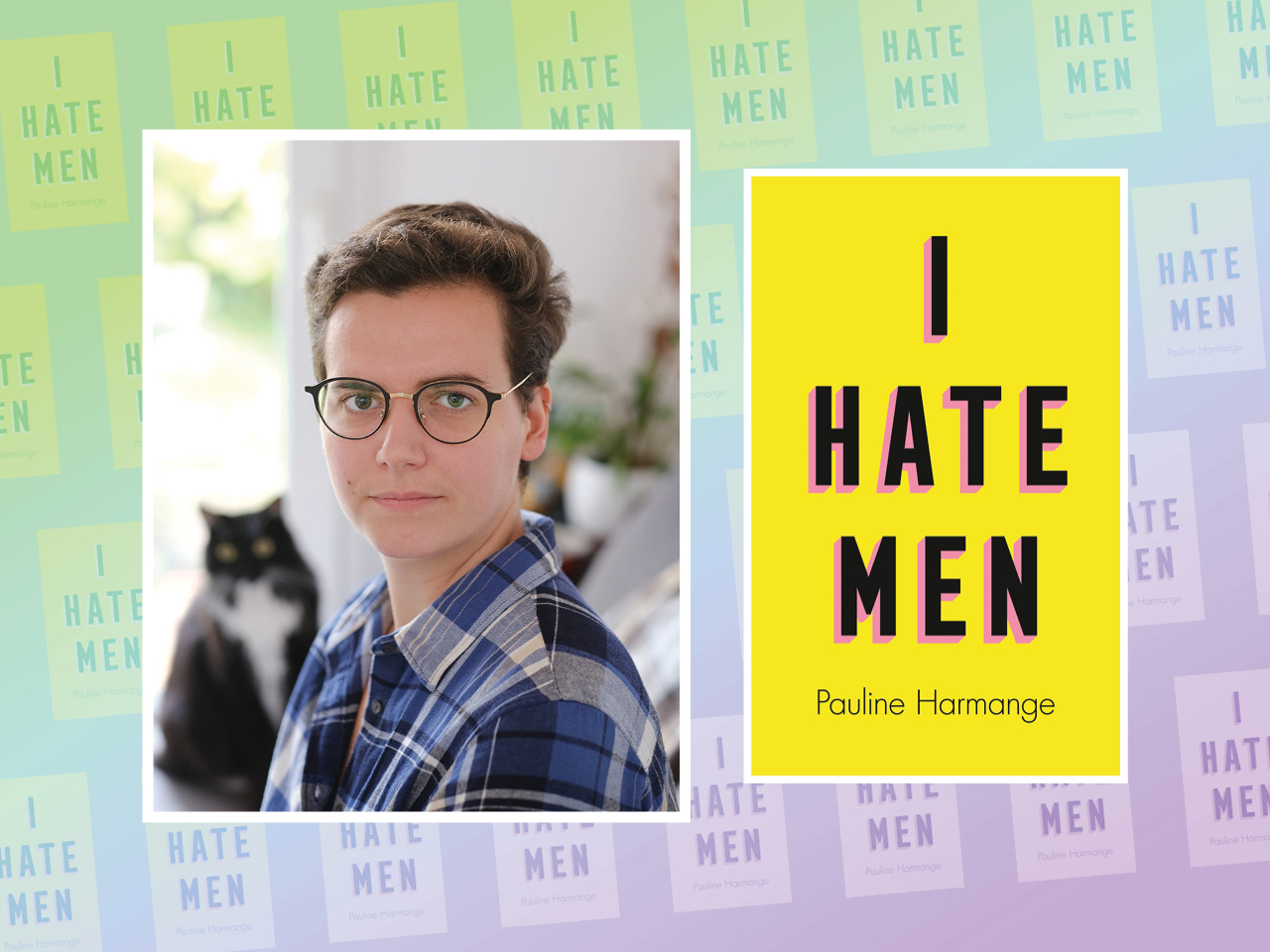 In her 1972 essay The New Misandry, American writer Joanna Russ writes “there are two types of women who don’t hate men: the very lucky and the very blind.”

Nearly 40 years later, 26-year-old French feminist and writer Pauline Harmange has, like Russ (and others both before and after her), attempted to rescue misandry, or the hatred of men, from its pointed hat and broomstick associations and understand it not as an aberration, joke or liability but as a logical human response to oppression and inequality. Her 80-page essay, originally published in France in August 2020 as ‘Moi les hommes, je les déteste’ (I Hate Men), makes the modest proposal that misandry is not dangerous or corrosive, but a source of “joy.”

“[W]hat if misandry were necessary – healthy, even?” she writes, and possibly the means by which women may liberate “an unsuspected power.”

That query and the succeeding answer was initially intended for a small audience. Harmange got an unexpected publicity boost, however, when an adviser to the French minister of gender equality tried to have the book banned for inciting sex-based hatred. As a result, its initial 400-copy press has now ballooned into the tens of thousands and the slim volume has been sold internationally, including here in Canada in a recently released English translation.

Harmange, on the phone from her home in northern France, defines what misandry means to her, how charges of man-hating have been historically been used to silence women and why she thinks embracing it is healthy.

I was expecting more anger in I Hate Men, to be honest and was surprised by how calm and modest your proposals were. The primary one being your desire to be granted the right to simply acknowledge that you don’t really like men as a group or how little they’ve done/do to advance gender equality. How do you respond to the criticism that you’re not that angry? Am I just disappointed to find out that misandry is–and always has been–an intellectual and moral response to inequality?

I get it. I think, also, the controversy around the book has made people expect a very fiery piece of work. It’s funny because that’s really not who I am as a person and that’s not to say that I don’t understand or support very angry feminists but it’s just not who I am, and it’s also my point: that you can be angry without being violent and that it’s OK and that it’s also very simple for a woman to be angry. I think that people see hatred like men—men will hate someone and be violent towards them—maybe we can see another way to hate and despise in politics.

How do you redefine misandry in the book?

When people look up misandry in the dictionary it says a ‘morbid hatred for men’ which it isn’t so much. What I experience, and what a lot of women experience, is that it is a general negative feeling towards men as a gender and social group. It can vary from just being wary of them to honestly not wanting to deal with them in daily life because of, well, patriarchy.

Feminists have argued that misandry as a concept is false because, as you write—that unlike misogyny—“there is no coordinated, structured system for denigrating or coercing men.” You acknowledge that there is something real about it: that it is an emotional and psychological consequence for many women as a result of living in a patriarchy. How has recognizing that been helpful to you?

The anger is here. It’s boiling inside of many women. When you can put words on it and go to the roots of it then you are more able to redirect this energy that’s building up inside to fight for something. Misandry is not a tool for feminism, it’s just a reaction for what we are suffering every day. Acknowledging that can make us more efficient when we are fighting against patriarchy.

What’s the problem with thinking of misandry as the flip side of misogyny?

It’s a show of bad faith, because everyone knows there’s no system that empowers women when they hate men. I would say that misogyny is the tool of the oppressor and misandry is the response of the oppressed, so there’s no parallel that can be made. There are people who say to me that if the book had been called I Hate Jewish People it would be horrible, but men are [an] oppressive [force] and the world is built to please the men; [men] are not going to suffer from such a book.

Your book garnered international attention after an adviser to the French ministry for gender equality took issue with its publication, urging your publisher to withdraw it or else face prosecution for inciting sex-based hatred. Were you prepared for that kind of response?

It was a huge surprise because the book was published originally by a very small publishing house [that printed] only a few hundred copies. To this day I don’t know how this man came to find the book on the internet.

He reacted to the title of your book without reading it. Do you see a parallel between his reaction and how people react to misandry generally?

What I’ve come to realize now is that a lot of women have thought this single sentence, ‘oh my god, I just hate men sometimes’ and that’s why they seem drawn to the book. I think it’s also why men find it hard to think of themselves as creatures that we can criticize. This man who just saw the title of the book, he just couldn’t bear the idea of being part of this criticism of virility and masculinity.

Feminists are always charged with being man-haters and some are self-conscious about that because it’s a historically effective way of discrediting their evidence and their arguments. What power lies in owning hatred of men as a social group?

I think when you are free from [fear of that bad faith criticism] you can focus on what’s really important. We lose a lot of time and energy reassuring people that we really like men and that they are welcome, and that eats up so much time and energy that we can’t put in the actual work we need to do. It also frees up time to enjoy a lot of other things that are very interesting and fulfilling as women, that aren’t trying to please men. It’s a liberation of the mind and of the schedule.

What’s your response to moral panic around women expressing their hatred for male power?

Men seem incapable of imagining a world where there would be no patriarchy but where there would also be no matriarchy. They seem to believe that if we lose patriarchy it means we will have total power over them. They don’t have a lot of imagination when it comes to power structures. It shows we have a lot of work to do to make people understand feminism has never been about making women more powerful than men. It has always been equality. A lot of people really seem to think that if we could, we would inflict upon men as much violence as we have suffered…that’s not what we want, because it’s horrible.

Part of the argument for ignoring the reality of misandry is that it alienates men. You don’t agree with that POV. Why?

I don’t want to be friends with a system that will just crush anyone that’s not a rich, white heterosexual dude. The thing about that power is that you can try and be in power or be powerful yourself or you can say that you don’t want power and that no one should have power over anyone else. I think feminism as a revolutionary idea should be about the idea that nobody should have power over another human being because that’s where so much inequality comes from.

Do you feel you’ve lost potential male allies as a result of this book?

I think there are a lot of men that say they are allies but when you scratch the surface you realize that there are not. They are just kind of [offering a] performative role that is not helpful at all. If I have helped getting rid of fake allies, I am very glad. There’s a lot of debate right now about generalization, and saying things like men are trash, but I think it’s very easy to recognize when you are a part of something that is problematic and when you are not…

There has been sporadic public conversation in North America around the idea of misandry and mainly as playful, ironic. Is there a similar kind of movement in France? Do you feel support from French feminists?

In France when I wrote my book there was this idea that a lot of feminists call themselves misandrists as a jest because it’s really difficult to acknowledge that you are not really joking because you have to get into some really unpleasant debates. When I published the book, I got a huge amount of support from French feminists and whenever I’m attacked on the Internet I feel like I was a nobody before and now I’m part of this very touching family of women who know what the deal is with men is in general. In France the backlash against feminists is very, very violent and now I know that [personally].

Do you see any irony in the backlash to your book and say, the widespread support for free speech when it relates to something like Charlie Hebdo?

I hadn’t really thought about it this way but it definitely is very ironic, indeed. But it also pertains to a very reactionary French idea of what freedom of speech should be, meaning the freedom to say whatever is offensive in cover of humour, and not actually wanting hard truths and serious topics of conversation regarding discriminations to actually be discussed.

You mention that French feminists get a violent response in France. Any come to mind? Could you mention something you’re thinking of or some of the abuse you’ve gotten?

When my book came out with Seuil, a French journalist and activist, Alice Coffin, also released her own book, titled The Lesbian Genius. For the second time in the same year she was violently attacked on social media, received very serious threats, so much that she had to be placed under protection. She said first that as a lesbian, she was much less likely to be raped and beaten by her partner, and then in her book, she said that the male gaze was so powerful in pop culture that she didn’t want to give it more space in her own imagination and only watched female-directed movies, read female-written books, etc. We both had our fair share of Photoshops of our faces as Hitler. We kind of bonded over it, everytime my book or my name was mentioned in French media, it was alongside hers. I also think of Rokhaya Diallo, another French journalist who speaks of racial issues as well as gender issues, and is constantly defamed and debased in the media.