'Keep the Volume Low:' Being Black On Campus In Canada

Inside the Black Students' Association Room at the University of Guelph, a sign appeared asking us to be quieter. We have one room to ourselves, in a basement, and our voices are policed even here. 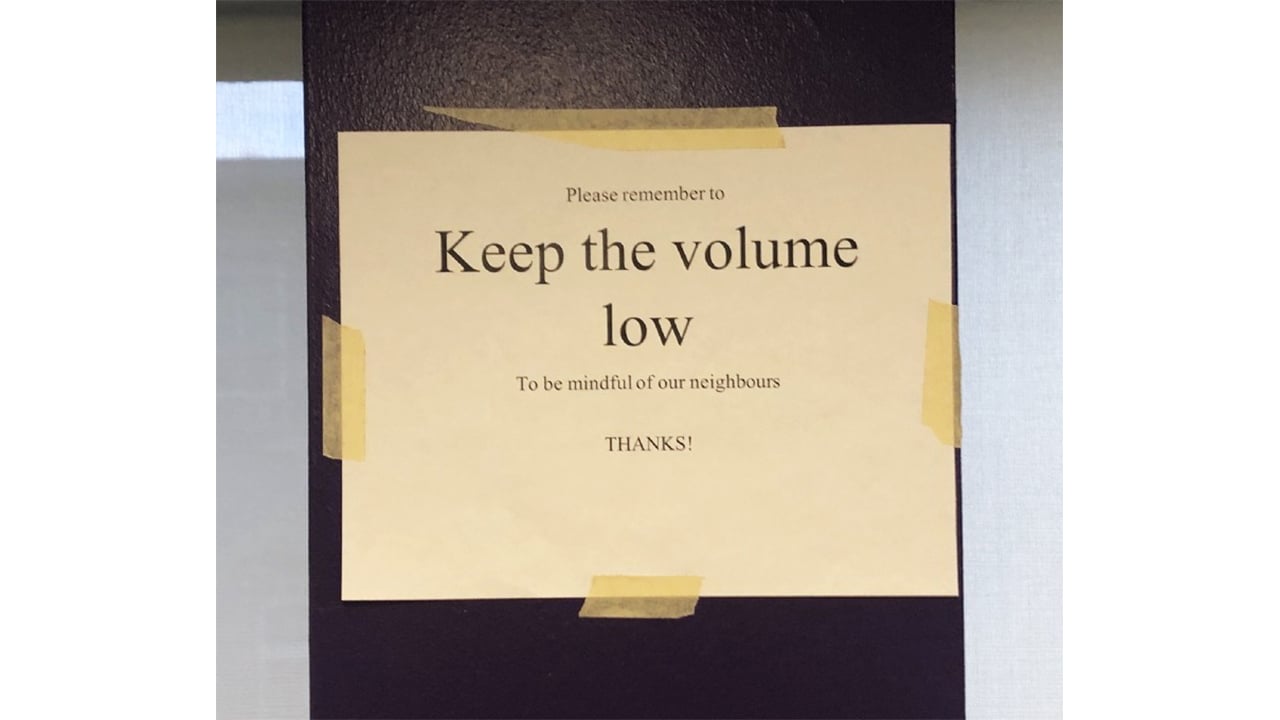 noun
a book forming part of a work or series.
the amount of space that a substance or object occupies, or that is enclosed within a container, especially when great.
quantity or power of sound; degree of loudness.

The Sign adorns a purple pillar in the Guelph Black Students Association room, formerly the C.J. Munford Centre, at the University of Guelph. It stands opposite to a whiteboard sporting a colour coded-map of the world. Dry erase tells the story of our members, who delineate their nations of origin in Africa and the Caribbean with bubble letters and smiley faces.

I love the GBSA room. I love that its microwave is so often spinning— sometimes with popcorn, sometimes last night’s rice and peas. I love its “complimentary” family-sized bottle of St. Ives lotion (a bottle of “complimentary” hot sauce for the shared fridge is pending). I love its Art Deco upholstery, and how it so perfectly coheres with the room’s purple accents. I love that all the usual signs that inhabit shared spaces — ”please clean up your messes’”— are absent, because we treat the space with the same respect we would our mother’s house. I love everything about the GBSA room, except that Sign.

It says:
Please remember to
Keep the volume low
To be mindful of our neighbours
THANKS!

“How long has that been there?” I asked when I first noticed it last January, addressing no one in particular.

“A few weeks. Someone complained.”

The “please” and “thank you” are dwarfed: clearly an afterthought. I wonder if every other club on campus has a similar sign.

In his memoir In The Black: My Life, radio giant and Guelph alumnus Brandeis Denham Jolly writes that in 1954, the University of Guelph was 10 percent Black—“as integrated as Canada got at that time.” Students from the West Indies came here to study agriculture and be caricatured in the school’s newspaper. A chaplain on campus counselled white girls not to date Black students. Minstrel shows were put on by the Ontario Agricultural College, which I’ve written about before. Jolly once watched a student drop a cigarette on the floor, and heard another respond “Don’t worry—we’ll get some n****r to clean it up.”

I think of what 10 percent Black looks like. What would it be like to see one in ten people on campus who look like me? The school doesn’t collect race-based data anymore, but anecdotally, it’s far from 10 percent Black. On a lucky day, I may see ten Black students, total. This room is my only reprieve, and I’ve catalogued its sweet cacophony of sounds. The exhale of relief and the dropping of the shoulders upon entering. The smiling faces and warm greetings from everyone, whether it is your first time here, ever, or your first time that day. Primary-red locs and honey brown twists swing over shoulders as hearty laughs clink like champagne toasts, immediately followed by cognizant apologetic whispers. The latter didn’t happen before the Sign was imposed.

Jolly’s experience 70 years ago is, sadly, not unlike mine. During Orientation Week 2014, white students stormed the halls of a residence building dressed like the Klu Klux Klan. There’s no official record of this, because the Black students who tell me they witnessed it were in first year, and didn’t know their rights.

A year later, using the hashtag #BlackOnCampus, our Black students brought attention to anti-Black racism on campus, such as when a Black student was solicited for marijuana (still illegal then) by strangers. In response to their truths, they were called “monkeys” and “slaves” by their colleagues on social media. Racist art depicting the students was posted on Twitter. I think of the McCarthy-esque aftermath of the protests, during which Black students on campus said they were questioned about the unrest, at random, by faculty and staff. I think of the lack of substantive change by the administration, despite its promises.

But why would the University of Guelph be any different from the rest of Canada? Contained, controlled, and surveilled, Black people only inhabit space insofar as we are allowed in this country. It’s a truth that’s been analyzed shrewdly by poet, writer and theorist M. NourBeSe Philip, who hypothesizes Blackness as a phenomenon that must be contained by sanctions placed on Black movement. One need only look at her history of Caribana — once held in downtown Toronto, now relegated to Lake Shore Blvd. and surveilled by helicopters — to see how this is manifested. And it’s especially true in the context of education: remember, the last segregated school in Ontario only closed in 1965, while the last in Nova Scotia closed in 1983.

the european forbids the african language; forbids her her spirituality; forbids her her gods; forbids her her singing and drumming; forbids her the natural impulse to cling to mother, father, child, sister and brother — forbids her family. leaves her no space. but that of the body. and the mind. which in any event they deny.
— M. NourbeSe Philip, “Black W/Holes: A History of Brief Time”

Being #BlackOnCampus in Canada makes me feel straitjacketed. Our diversity is lauded only when it is convenient. Simultaneously suppressed and tokenized, you ask, who am I in the schema of my peers? Claire Huxtable? Raven Baxter? Rastus? Do I assuage their fears? Or am I a troublemaker, an agitator? What model of Blackness should I shape myself around?

As I walk in or out of the GBSA, I frequently enter into dialectic with the Sign. Sign, I am mindful of our neighbours. I shrink myself for them the second I leave the room, my papier-mâché shoulders deflating, taking in only what air they leave behind. You needn’t remind me whose comfort matters more. It’s as if the Sign knows that having a space to call our own lends itself to free expression, to power of sound, to making our presence known.

I’m anticipating comments that insist I am overreacting. That we must just be louder than other clubs, that the sign was added in a vacuum where anti-Blackness does not exist, and how hard is it to be courteous, anyways? But I walk past licensed pubs on campus every day. The noise emanating through their doors is significant, and has not ceased or decreased in the three years I have been here, despite close proximity to offices and lecture halls. There are no Signs asking that this happen, either.

To many folk, “keep the volume low” might seem like an innocuous request. But to those whose efforts to place-make are consistently curtailed, whose voices undergo constant erasure in the classroom, these words border on insidious. We have one room to ourselves, in a basement, several buildings away from the mainstream campus life organizations. Our voices are policed even in this room, disallowed to extend beyond its confines.

It echoes the sentiments of the Canadian ministers travelling to the American South to regretfully inform Black sharecroppers that our soil cannot sustain crops or livestock, to dissuade them from immigrating here. 1908: The volume is controlled.

It echoes the era when Lake Erie was flanked by “sundown towns”—all-white cities where Black persons were forbidden from staying after sundown. 1930: The volume is controlled.

That’s the same era during which 75 Klansmen burned crosses in Oakville to prevent a Black man from wedding a white woman, and were lauded for acting “quite properly” by J.B. Moat, then mayor. 1930, again: The volume is controlled.

GBSA is more than just a room. It is an opportunity to divest from the chronic inauthenticity that marks my life, and the lives of so many Black Canadian students like me. We eat our mosaic of meals together at lunch. We FaceTime relatives back home, and whether we are expats or Canada-grown, we feel guilty that we fall short of their expectations. We reminisce about coin laundry and chores under the watchful eye of our mothers, and speculate about what awaits us after convocation. We fashion space for ourselves and fulfill our ancestors’ wildest dreams. Provided, of course, we keep the volume low.

Laila El Mugammar is a Black Canadian writer studying at the University of Guelph.