Anti-Asian Violence Spiked During COVID-19, Here’s What You Should Know

‘It's not surprising that in times of crisis, [racism] surfaces.’ 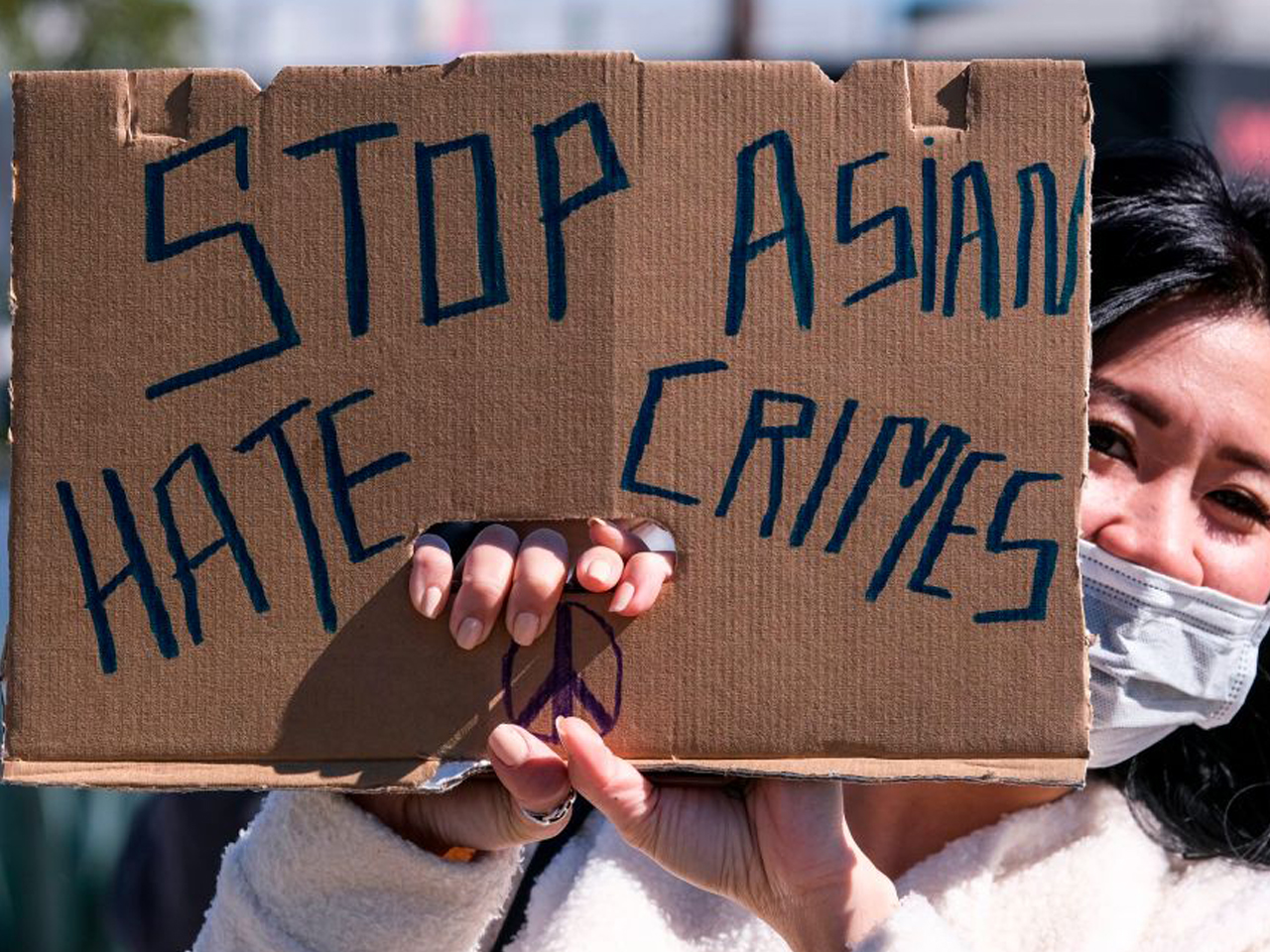 A demonstrator wearing a face mask and holding a sign takes part in a rally to raise awareness of anti-Asian violence, near Chinatown in Los Angeles, California, on February 20, 2021. The rally was organized in part in response to last month’s fatal assault of Vicha Ratanapakdee, an 84-year-old immigrant from Thailand, in San Francisco. (Photo: Getty)

In recent weeks, disturbing stories about violence against elderly Asians have emerged out of the U.S., prompting a call for action from the Asian-American community. But Canada isn’t immune to these acts of hate. In fact, we have a higher number of reported hate crimes per capita than the U.S. Since COVID-19 was first identified in Wuhan, China last year, similar stories of anti-Asian racism have surfaced here, putting it in the spotlight. However, Avvy Go, director of the Chinese and Southeast Asian Legal Clinic in Toronto, wants to remind Canadians that anti-Asian racism has always existed. “I think COVID-19 really shines a light on the depth and scope of anti-Asian racism in Canada,” she says. Here’s what you need to know.

How many incidents have occurred in Canada?

The numbers are troubling—a report released in February found that anti-Asian hate crimes in Vancouver rose by 717 percent in the span of one year, from 12 incidents in 2019 to 98 in 2020. Section 319 of the Criminal Code of Canada defines a hate crime as communicating written, spoken or physical statements that incite hatred against an identifiable group of people in any public place. This includes reported incidents like a physical assault on a 92-year-old Asian man with dementia and the repeated vandalism of a Chinese Cultural Centre. Nationally, a study by Statistics Canada found that Canadians with Asian backgrounds were more likely to report noticing an increase in harassment since the beginning of the pandemic. The highest percentage of the racialized participants are those who identify as Chinese (30 percent), Korean (27 percent) and Southeast Asian (19 percent).

According to data collected in 2020 by a network of Asian-Canadian advocacy groups, British Columbia is at the top of the list for most reported anti-Asian incidents per capita in North America, followed by California, New York and Ontario. B.C. has 44 percent of reported cases in Canada compared to 38 percent in Ontario.

What is the history behind these racist sentiments?

Ultimately, these acts of hate are rooted in Canada’s long history of anti-Asian racism. Policies like the Chinese Head Tax in 1885 and the Chinese Exclusion Act in 1923 were implemented by the government to prohibit Chinese immigration. Indian immigrants were prevented from entering Canada via the Continuous Passage Act and Japanese-Canadians were subjected to internment camps during World War II. These policies were born from a form of xenophobia known as “Yellow Peril,” which also created the racist stereotype of unhygienic, disease-carrying Asian immigrants.

These stereotypes persisted through SARS in 2003 and have resurfaced during COVID-19, inciting these violent attacks. Hanazawa adds that the large concentration of incidents specifically in B.C. could also be fuelled by the stereotype that Chinese immigrants are rich, foreign buyers and that they are the reason for the province’s unaffordable real-estate market.

“Linking to that history is the notion that Chinese or Asians are foreigners—we’re not seen as Canadians,” says Go.

How is this affecting Asian-Canadian communities?

These anti-Asian sentiments have had a detrimental impact on mental health.  Asian-Canadians worry about being the next victim of both the virus and racist attacks. Hanazawa remembers an incident at a park last May with her friends where a white man told them to “go back to China.” Go says she’s received many racist emails during the pandemic in reaction to her media interviews where she speaks out against the hate. She also recalls walking on the street and someone spitting right in front of her face. “You start to question your sense of belonging,” says Go.

There are also economic consequences. Chinese restaurants were hit hard with a large drop in customers in the early months of the pandemic before lockdown due to the racist rhetoric and misinformation surrounding the virus.

How have public figures encouraged these anti-Asian views?

“When they see people who are high profile expressing these views … it gives it legitimacy,” explains Sugiman.

What are governments doing to combat anti-Asian violence?

Last May, Prime Minister Justin Trudeau condemned the violence against Asian-Canadians during a daily press conference. Since then the federal government hasn’t put any concrete plans forward to tackle the issue.

The B.C. government plans on bringing anti-racism legislation forward this year. They’re also working with law enforcement across the province to ensure the proper prosecution of hate crimes. In Ontario, the city of Toronto has launched an educational campaign to raise awareness about anti-Asian racism. Additionally, the Toronto District School board and Elementary Teachers’ Federation of Ontario created a document with tips to help educators address the issue in classrooms. This includes Canada’s history of anti-Asian racism and dispelling the “model minority” myth, which generalizes all Asian people as obedient and therefore successful and further supports anti-Black and anti-Indigenous racism.

While these plans and campaigns are a step in the right direction, both Go and Hanazawa agree that governments still need to prioritize direct dialogue with the people who are experiencing this racism first-hand. Go also says the federal government has fallen short by leaving Asian-Canadians out of its anti-racism strategy. “We want to at least have some measures that look at the type of racism that is unique to us because every community experiences racism differently,” explains Go.

How has the Asian-Canadian community mobilized to tackle this?

Advocacy groups are putting in the work on the ground to address anti-Asian racism. Tools like Act 2 End Racism and Elimin8hate provide a platform for victims to report hate crimes and allow the organizations to use the data to push for anti-racism policies.

Hanazawa’s organization is also a part of Act 2 End Racism, a coalition of community groups of Asian descent tackling racism through educational campaigns. Go’s clinic has teamed up with the Chinese-Canadian National Council for Social Justice to launch the #FaceRace campaign, an online resource that shares people’s experiences with anti-Asian racism and the history behind it. “By sharing these stories, we hope that it will encourage other victims to come forward while [continuing] to build allyship with other communities as well,” she says.

How can you help?

“I think we can support one another through education and realize some of the ways in which our experiences are similar, but also try to understand how they’re dissimilar,” says Sugiman.

Organizations like the Chinese Canadian National Council – For Social Justice and Project 1907 provide resources that can educate you and your family about Asian-Canadian experiences. Supporting local Asian businesses is also helpful—you can likely find a list of nearby businesses online (like the Local 88 Facebook group in Montreal) in your area. On your next takeout night, try out a new ramen or dim sum restaurant. This all boils down to being an ally—learning about the history of anti-Asian racism, listening to the people directly affected by this xenophobia and safely intervening when you witness a racist attack.