5 Women On How They Reduced Their Garbage

The truth about going zero-waste.

The zero-waste lifestyle sounds like a dream: a place where the soap is made by hand, the vegetables are grown in sprawling community gardens and people barter for more than they buy. Our planet would benefit massively from a society run this way, but for many, the dream fades away when trying to move from ideal to real. Though we talk a lot about sustainability, it’s difficult to be sustainable; Canadian households waste $1,600 of food per year and recycle less than 10 percent of plastic. And, zero-waste living relies on privilege—no matter what the internet might suggest, it requires a magic combination of time, money and mental space that many just don’t have. Luckily, there are as many ways to reduce waste as there are to create it. By doing what they can to cut back and reduce the amount of garbage and recycling they put out, these five women show that our actions don’t have to be perfectly zero-waste to do good. 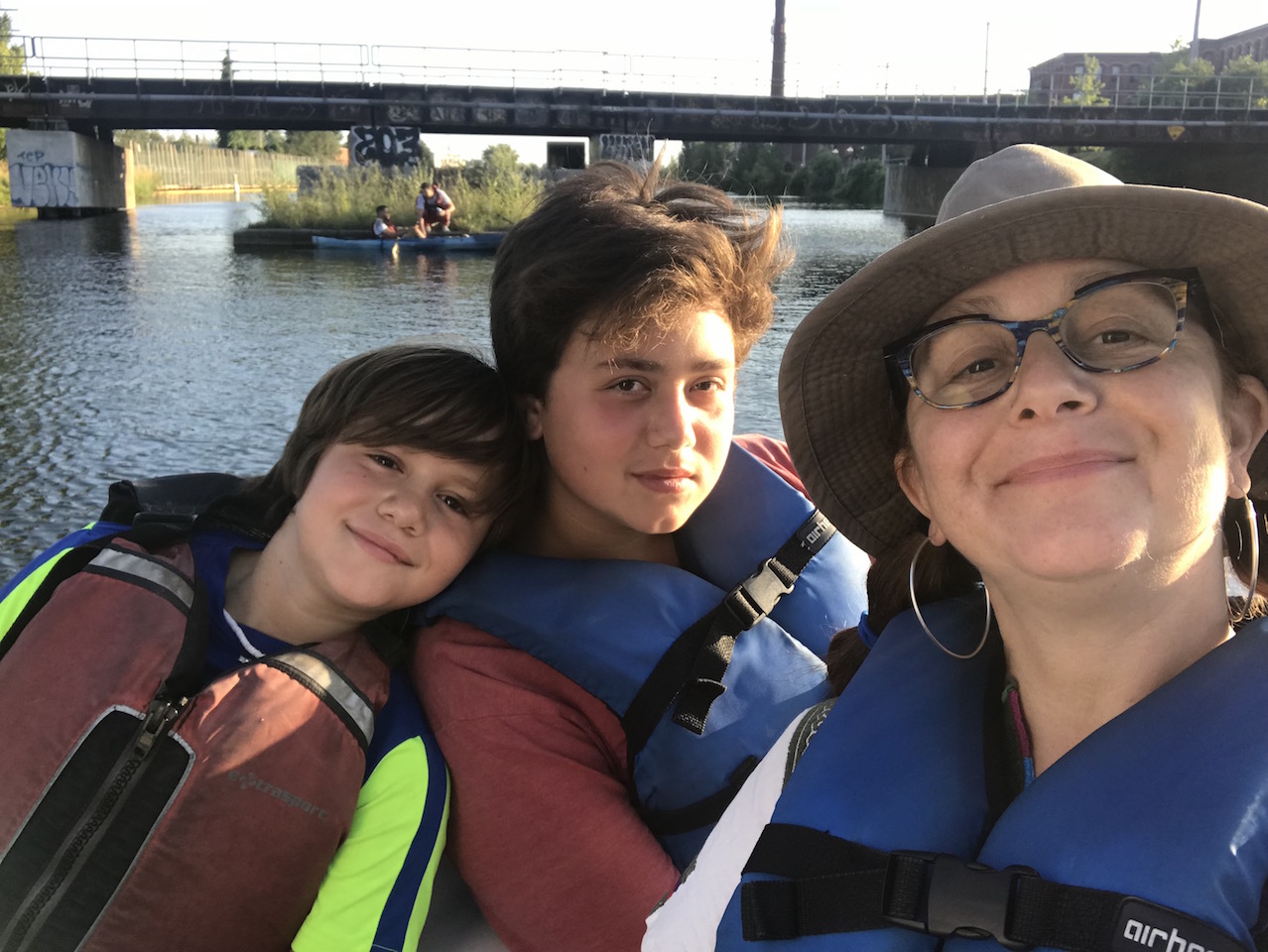 Jennifer Goldberg, 51. Full-time graduate student at the University of Toronto.

Household: Lives in Toronto with her two kids, ages 10 and 13.
Midwife-researcher Jennifer Goldberg’s lifelong commitment to reusing and recycling was put to the test when she and her partner of 24 years split up last year. After selling their home and finding a new place for herself and her kids, who live with her part-time, Goldberg kept only what is absolutely necessary or emotionally valuable—but re-furnishing was tough. “My ex made all our furniture, so she took it,” Goldberg says. “But I’m not the kind of person that’s going to spend $3,000 at Ikea.” Instead, she prioritizes access and affordability—90 percent of her new furniture came from what she calls “the unspoken economy of garbage to gold.” (That is, curbs, garbage bins and free swap sites like Bunz.) She learned how to spot curbside treasures from her dad, with whom she used to go garbage picking as a pastime when she was young.

For Goldberg, this way of life is about sustainability—and the thrill of the hunt. One of her best finds was an unwanted mid-century modern teak credenza frozen into someone’s lawn. And while she goes through cycles of purging and finding new “gold,” this past year, she’s been proud to maintain simplicity. “I can just keep biking past the garbage pile,” she says.

The hardest part
“There’s a tension between really believing that it’s important to live like this for the world, for me, for my kids,” Goldberg says, “and just getting through a day.” Often, she just can’t bike to (or afford) the butcher that will wrap chicken in paper. It takes mental and physical energy to remember cloth bags, wash the Tupperware or keep her eyes open for finds. She knows she can’t do it all and keeps in mind that “there’s a certain amount of privilege” behind the many things she does accomplish.

Best advice
Begin with small, achievable actions and remember: “maintaining is way easier than starting.” If you can find the time to sort through your material goods, Goldberg recommends starting with a garage sale with a specific purpose for the proceeds. For instance, she bought a barbeque with the money she made from hers. 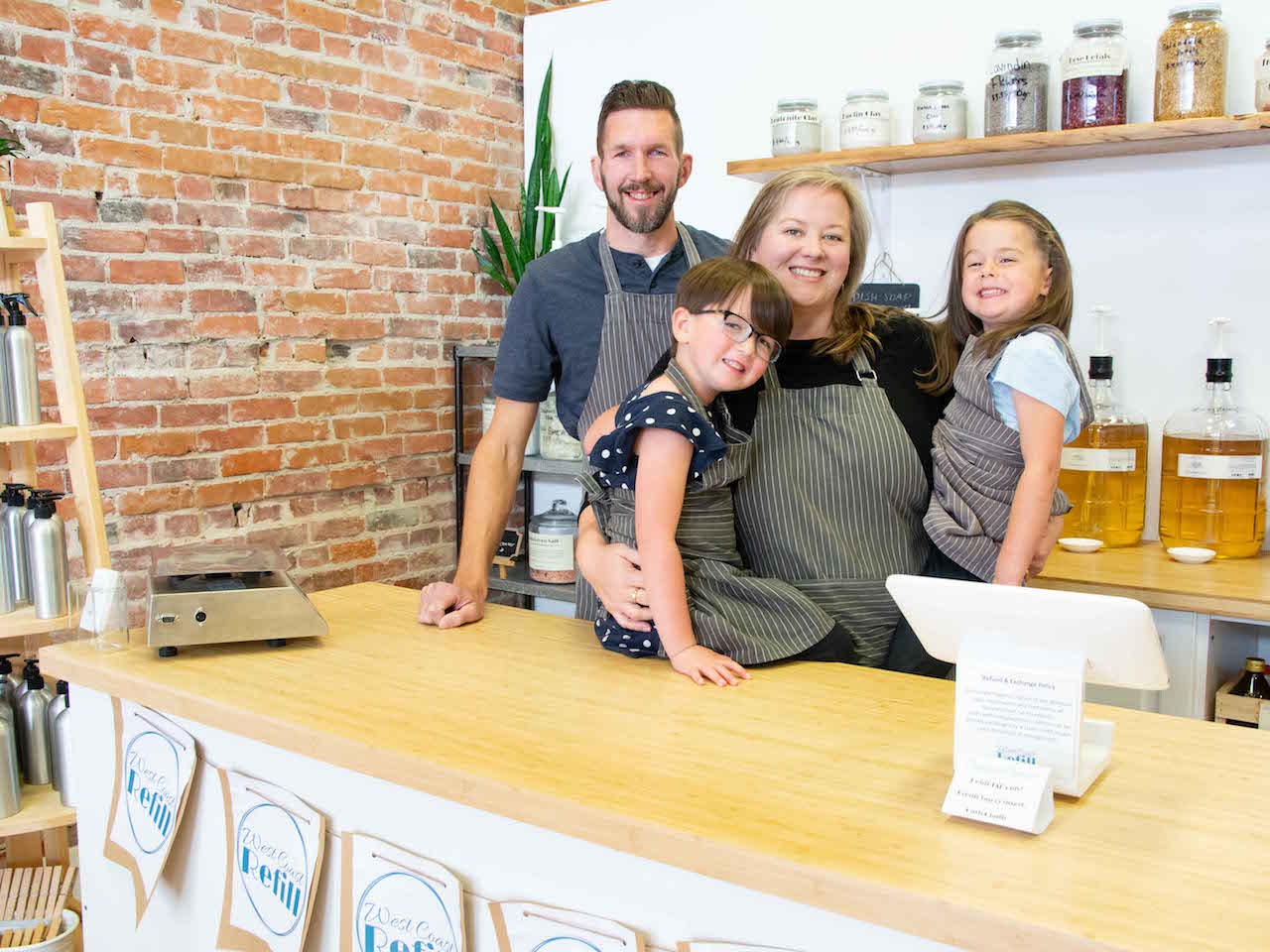 Household: Lives in Langford, B.C. with her husband and four-year-old twins.
Early on, Leanne Gallagher Allen’s grandparents taught her the value of repairing over replacing and gardening over groceries. “I’ve pretty much been environmentally minded my whole life,” she says. Her family now lives very low-impact—for example, they vermicompost, collect rainwater and grow their food. Then, last summer, the Gallagher Allens found out that after three years of waiting, they’d been approved to adopt twins. Their toddler daughters were used to disposable pull-ups and loved Kraft dinner and plastic toys. The new parents didn’t want to simply take these things away, so they helped their daughters slowly adjust to their lifestyle: “Now they go to playgrounds with me and pick up garbage,” she says. “I’m proud of our kids.”


The hardest part
Gallagher Allen says the biggest challenge is “avoiding the mass marketing of ‘more is better.’” She points out that the big box stores in her suburb consistently try to sell far more than she needs, so she’s learned it’s easier just to avoid them. “Make a point of going to the places that sell only what you really need,” she says, highlighting the benefits of small local businesses over one-stop wonders like Walmart.

Best advice
Even as a retailer, Gallagher Allen recommends looking past the many beautiful zero-waste blogs and Instagram accounts when starting out. You don’t need to buy fancy new bamboo cutlery or high-end bread bags; any cutlery and cotton bags will be just fine. To start a new set of habits, you don’t need to buy a new set of things. Just “use what you have and wear it out,” she says. 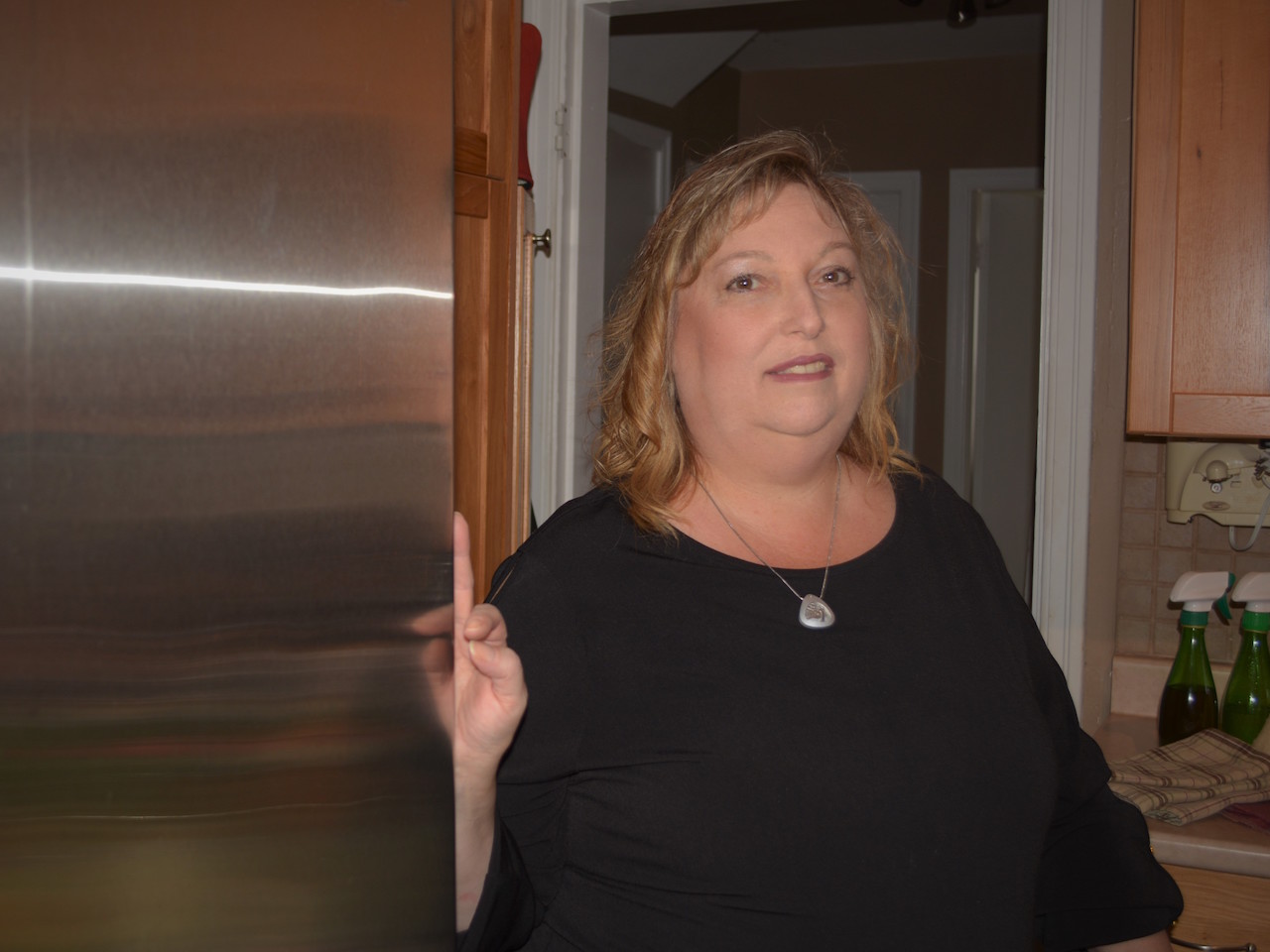 Paula Hodson made big life changes after being diagnosed with leukemia five years ago, like growing veggies and opting for as many reusable products as possible. (Photo, courtesy Paula Hodson)

Household: Lives in Halifax with her husband.
With a hint of humour, Paula Hodson describes herself as “a young 53 on chemo.” Five years ago, she was told she had leukemia. With her health on the line, she began thinking more deeply about what we put into our bodies and we put into the earth.

Hodson was already environmentally conscious before her diagnosis—she knew that “reduce and reuse come before recycle,” she says—but she and her husband have managed to drastically reduce their waste thanks to new habits. They’re intentional about their meal planning, have replaced disposable products like paper towels with reusable ones and grow some of their own food. The result: instead of taking out the recycling once a week, they now only need to do so once a month.

And, the impact goes beyond their own home. “I think that I’ve made an impact on other people,” Hodson says. She brings extra cloth bags to the grocery store, for example, and gives them out to shoppers who don’t have their own. “I’ve got other people doing things that they weren’t doing before: and they’re doing them because of me.”

The hardest part
Hodson says keeping her husband on track can be challenging, but it’s leukemia that keeps her from doing all she’d like. The exhaustion and illness can be overwhelming, and so can what she describes as the “waste being made around my personal health care system,” like plastic-wrapped needles and disposable bottles of Boost supplement drink. When she has the time and energy, Hodson brings food from home to the hospital instead of relying on their plastic-wrapped options—but ultimately, she keeps it in perspective. “I’m not going to be drinking Boost forever.”

Best advice
Even with all she has going on, Hodson uses creativity to curb her consumption. She and her husband have replaced commercial cleaning products like Febreze with vinegar and essential oils (ylang ylang, she chuckles, is a “fart sucker-upper”). 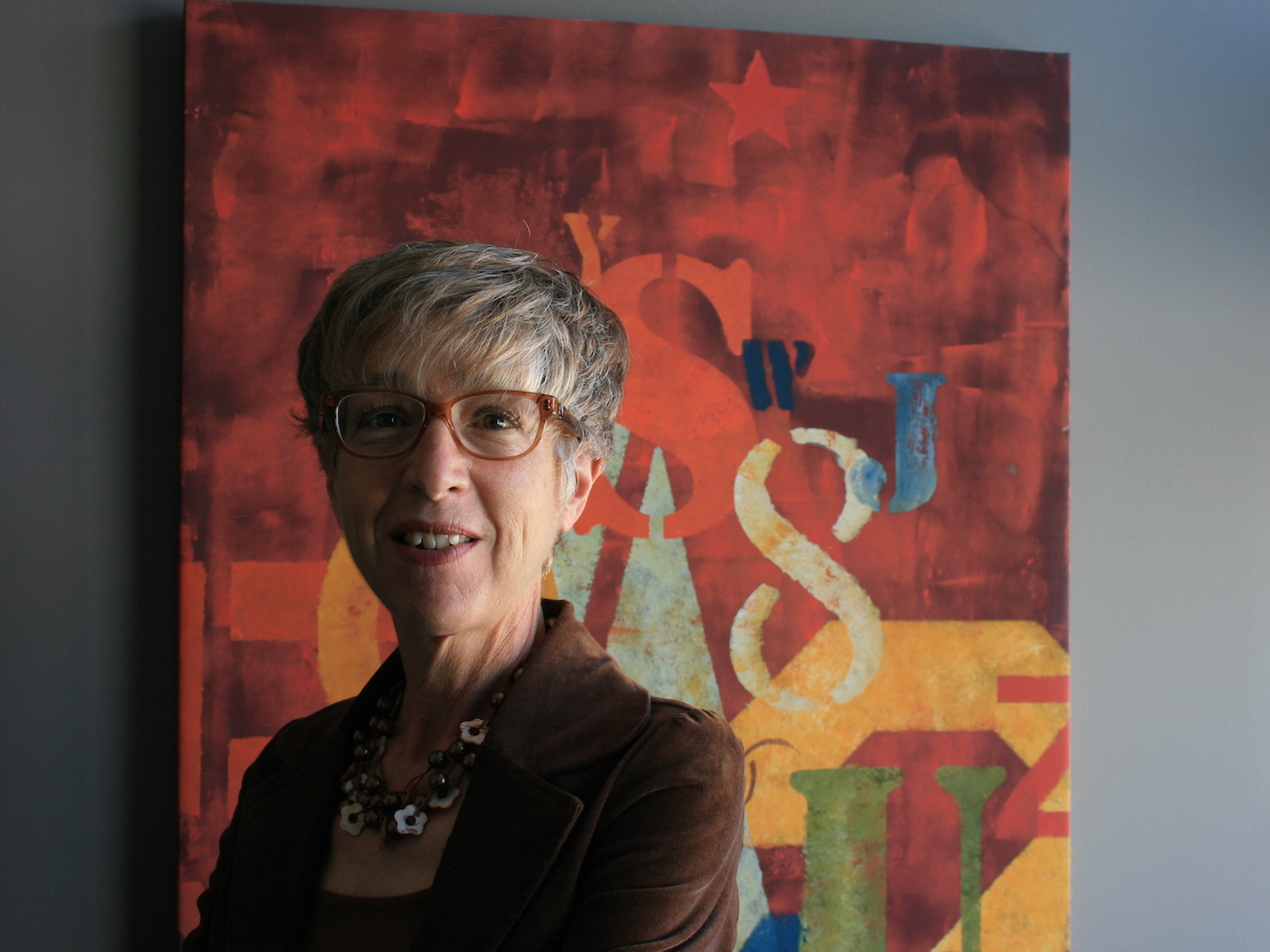 Household: Lives on her own in Burlington, Ontario.
“I was a bit on the vanguard,” says Kelli-an Lawrance; she’s been carrying her own cutlery and containers for over five years now and is grateful baristas no longer refuse to fill up her travel mug. She buys “ugly fruit” and almost-expired items at the grocery store, eats everything in her fridge and keeps a dozen cloth bags in her car. “Sometimes I feel so far behind,” she says, of her desire to create even less waste. “And yet when I do talk to people, especially people my age, it’s not even on the radar for some of them.”

The hardest part
“The most challenging thing has been giving up convenience,” says Lawrance. It’s difficult to remember refillable containers for Bulk Barn and to resist the ease of heavily packaged single-serving foods at the grocery store, for instance. And she’s not ready to give up air travel or her car. For now, she focuses on having an impact where she can, like the grocery store.

Best advice
Lawrence knows that convenience is key when it comes to making sustainable living work. Keep some little containers at the bottom of your purse to use as “doggie bags” for leftovers, she says, or even cheeses and grapes if you attend a fancy function—food waste is everywhere! And even though remembering all those mason jars for Bulk Barn trips can be challenging, she says their coupons offer incentives, citing the time she got 25 percent off for bringing her own containers. 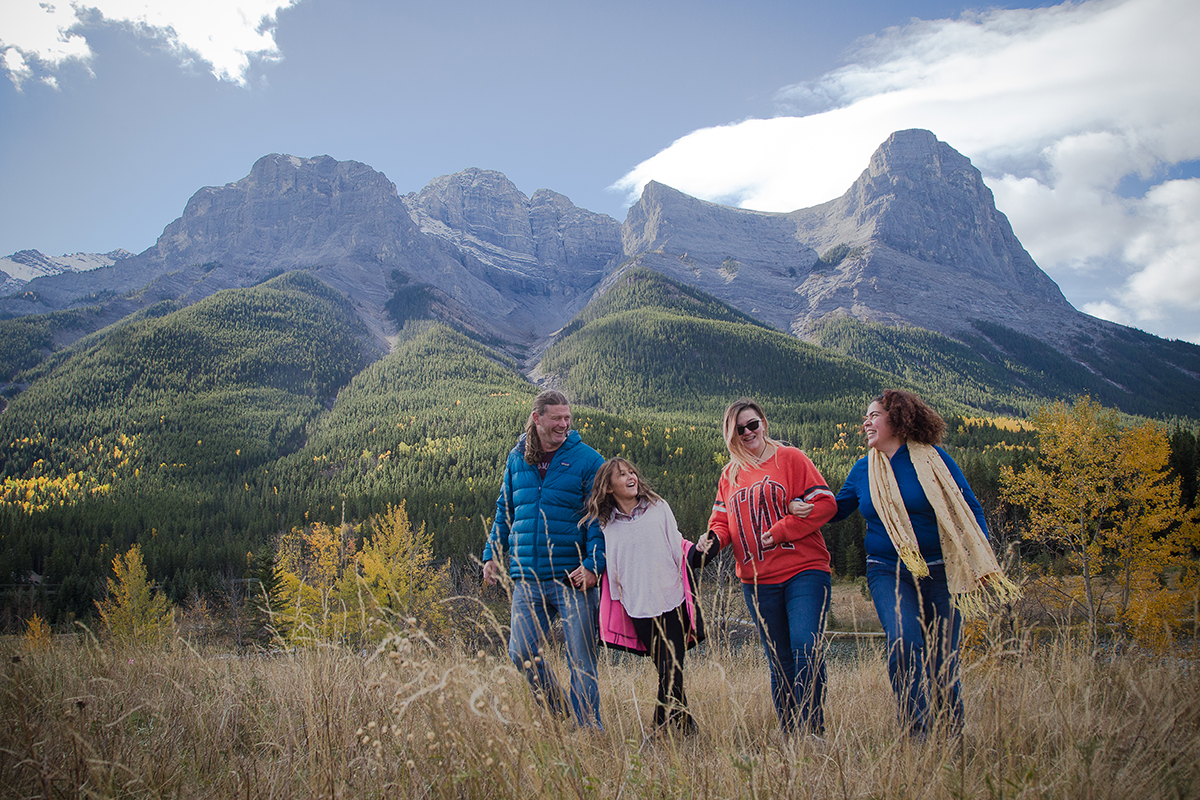 Household: Lives in Canmore, Alta. with her husband and daughters, ages 14 and 17.

“My parents called me their little environmentalist,” says Sarah Elmeligi, who’s proud of bringing that mindset to her own family. “I want my kids to grow up and have a good life. I don’t want them to grow up to face climate change Armageddon and be struggling for survival.” Her family prioritizes reducing waste while saving money; they buy used clothing, make their own yogurt and buy in bulk, for instance. Elmeligi knows going fully zero-waste isn’t realistic right now, but their garbage has been reduced to one small kitchen bag every two weeks and their kitchen is now plastic-free.

“For sure my proudest moments are when my actions are reflected in my kids,” she says. Whether she’s being called out by her daughters for using a plastic bag, or they’re coming to her for advice on being less wasteful, “those are the moments that warm my heart. I feel like I’m doing right by them.”

The hardest part
Thinking waste-free requires a huge mental shift: “My brain is wired to assume that convenience will be provided to me,” says Elmeligi. She’s had to consciously work to find creative solutions, like bringing a glass container to the deli meat counter.

Best advice
Elmeligi says it’s easy to fall into the trap of not doing anything because you can’t do everything. “But imagine if we applied that philosophy to all of our lives, saying for instance: ‘I can’t eat perfectly healthy, so I’m just not going to eat anything healthy ever.’ As a scientist, that logic is ridiculous. Every little bit counts.” And sometimes the little things can also be the most fun—Elmeligi and her friends recently got together for an afternoon of making beeswax wraps over wine.