How One Family Built Their Solar-Powered Dream Home

White oak accents, rounded archways and pops of colour give this off-the-grid passive design house a warm and cozy feel. 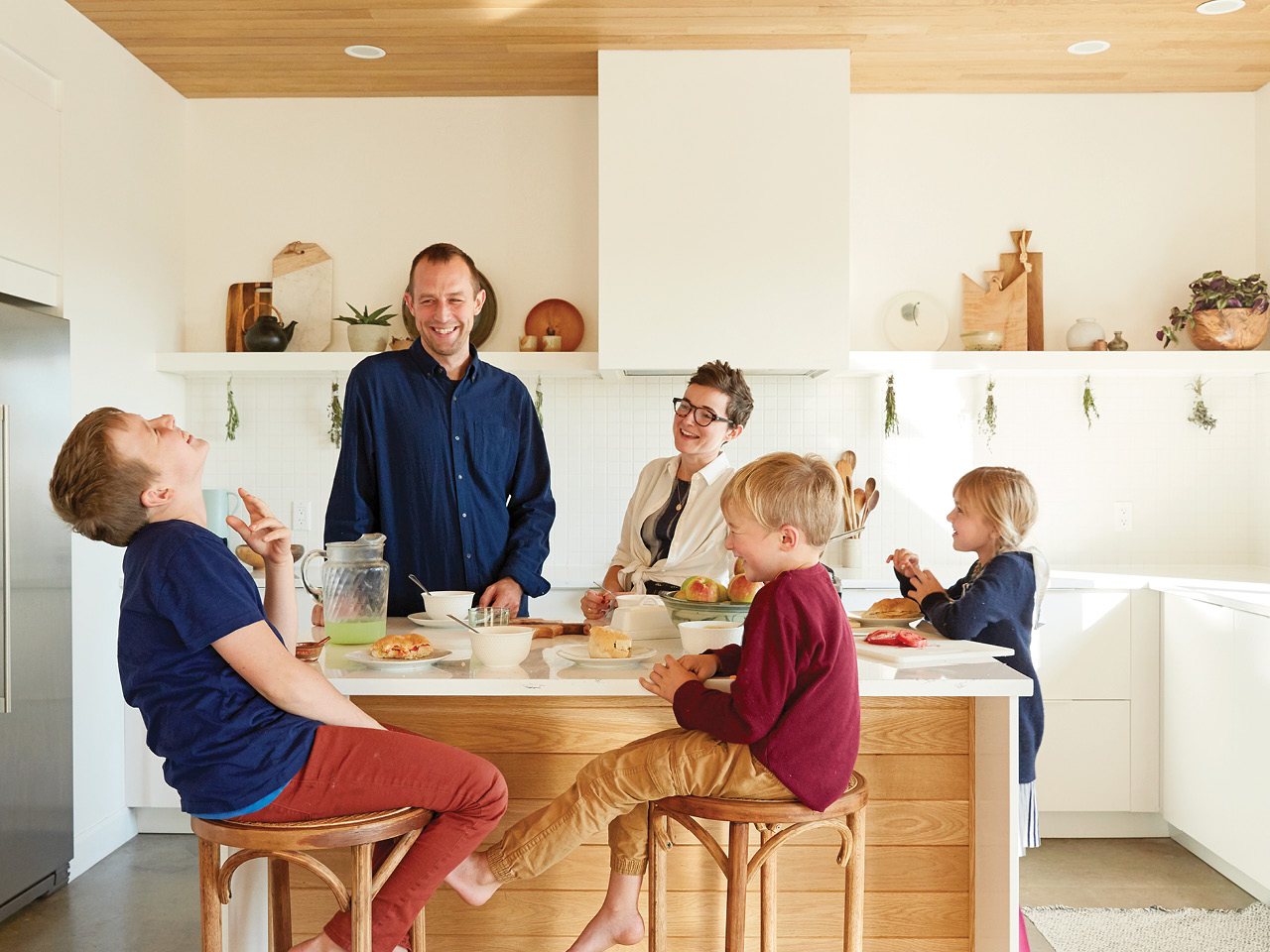 On a late fall morning outside of Owen Sound, Ont., the wind chill is –4 degrees and the grass is covered in a shimmering layer of frost. Inside their home, Jennie and Luke Hoekstra are making breakfast—crepes and bacon—and feeling toasty, with the thermostat hovering near 24 degrees. Their three kids—Jude, Neve and Wilder—are running around in short sleeves, laughing, practising piano and playing with their dog, Penny, a wheaten-schnauzer cross. It’s not out of the ordinary for the temperature to dip into the minuses at this time of year near Georgian Bay. What is unusual is that the Hoekstras have no furnace running; in fact, they don’t own one. Their home is what’s called an off-the-grid passive house; its lights are powered by the solar panels installed on their property, and it’s warmed by in-floor radiant heating—in which hot water is pumped through a system of tubes under the floor—as well as the sun. 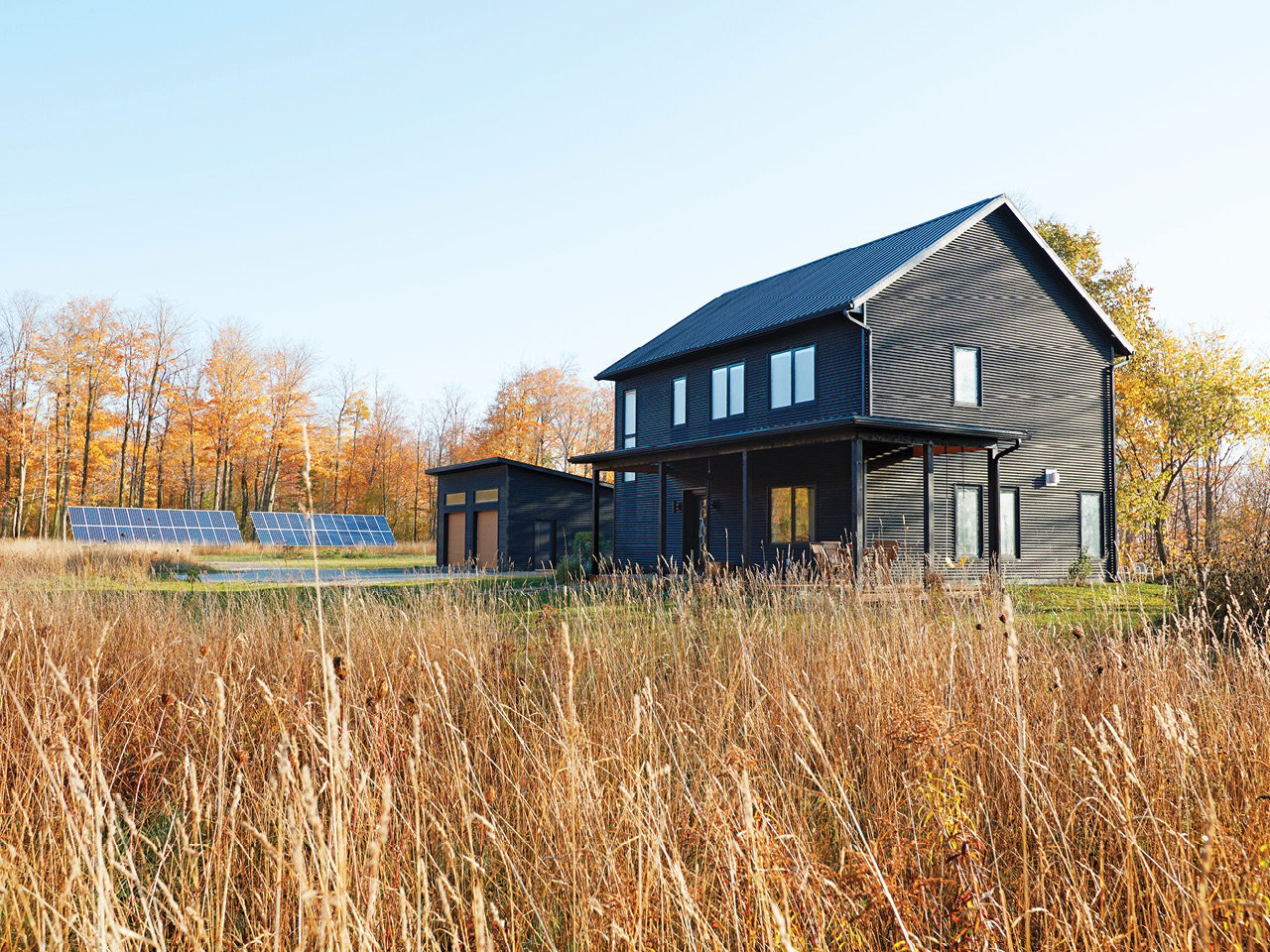 It would have cost $100,000 for the Hoekstra family to hook up hydro wires to their remote lot. Instead, they invested $50,000 in a solar panel system and situated their home so that it could take maximum advantage of the sun’s heat. (Photo, Erik Putz.)

“Even when it’s –18 in the middle of winter, we’re warm inside,” says Jennie. “We never even get to use our fireplace, otherwise it would get too hot in here.” The Hoekstras appreciate the coziness, especially compared to their previous home, a converted Victorian schoolhouse just down the road from their eco-friendly new build. The arched windows and ornamental plasterwork lent rustic charm to the space, but the thin brick walls were barely insulated. “We were always cold,” says Jennie. “We spent our winters wearing toques indoors. We wanted something much warmer.” When they first bought the four-acre lot where their new home now stands, their plan was to build a house that was efficient and well-insulated, but still connected to the conventional power grid. But when they priced out their options, they decided to go with an off-the-grid passive design. “Hooking up hydro wires on such a remote site would have cost us $100,000,” says Jennie. “We would have had to remove trees and widen a road. The solar power system we bought instead, which included solar panels and batteries, cost us $50,000.” 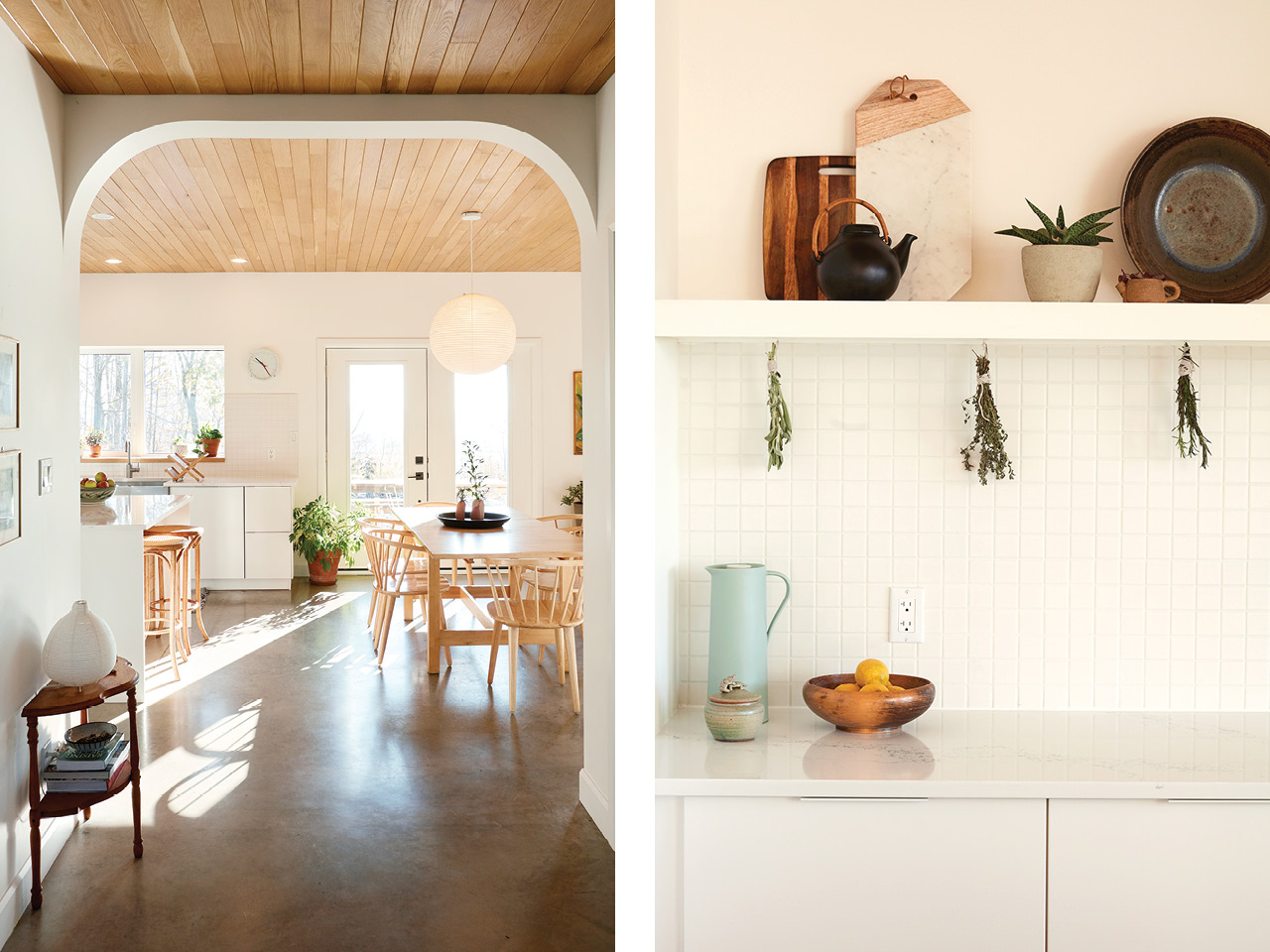 The Hoekstras also invested several thousand dollars in a set of plans from Passive Design Solutions, a Nova Scotia-based company that helps homeowners plan and build sustainable homes. The plans detailed how to orient the building to take advantage of the natural heat of the sun and how to assemble walls, roofs, floors and foundations to retain as much of that heat as possible. The family’s open-concept living, dining and kitchen area faces south and east with large windows to let morning and midday light pour in, while the in-floor radiant heating provides any additional warmth that can’t be harnessed from the sun—especially in the dead-of-winter months. 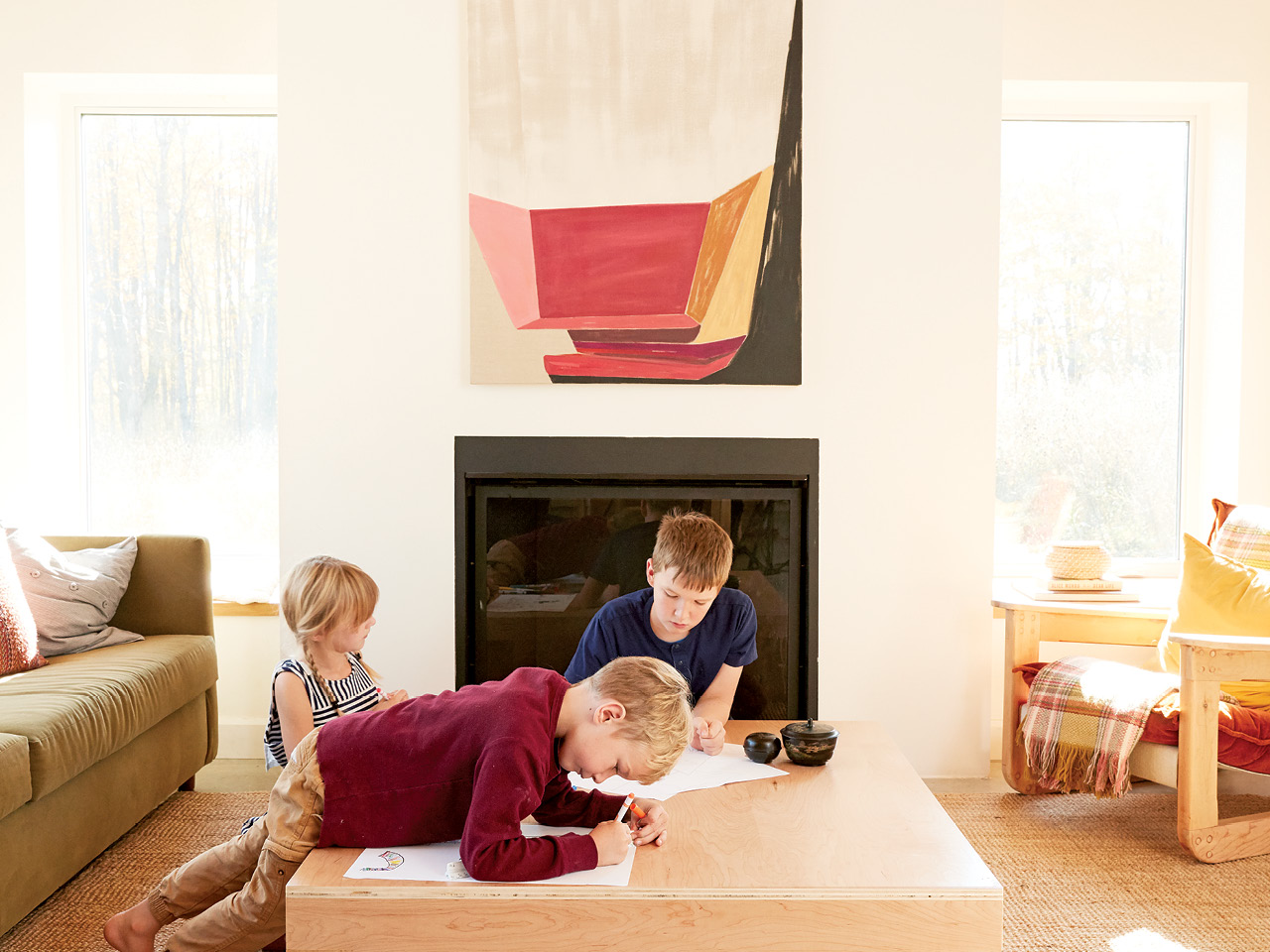 In addition to building much of the house, Luke also built some of the furniture, including the maple plywood coffee table in the living room, which Jennie designed. (Photo, Erik Putz.)

“The floors are highly insulated,” says Natalie Leonard, owner of Passive Design Solutions, who has helped people build more than 110 similar homes since founding the company 10 years ago. “They have four times the insulation required by the building code.” The walls and roof have more than twice the amount of insulation than what’s required and are sealed tight. (“You could basically heat the house with the equivalent wattage of a blowdryer,” says Leonard. “It’s that efficient.”) And there are just a few windows on the north and west sides of the home. “Western afternoon light tends to be too hot,” she explains, whereas the north face of the home rarely gets any light at all. 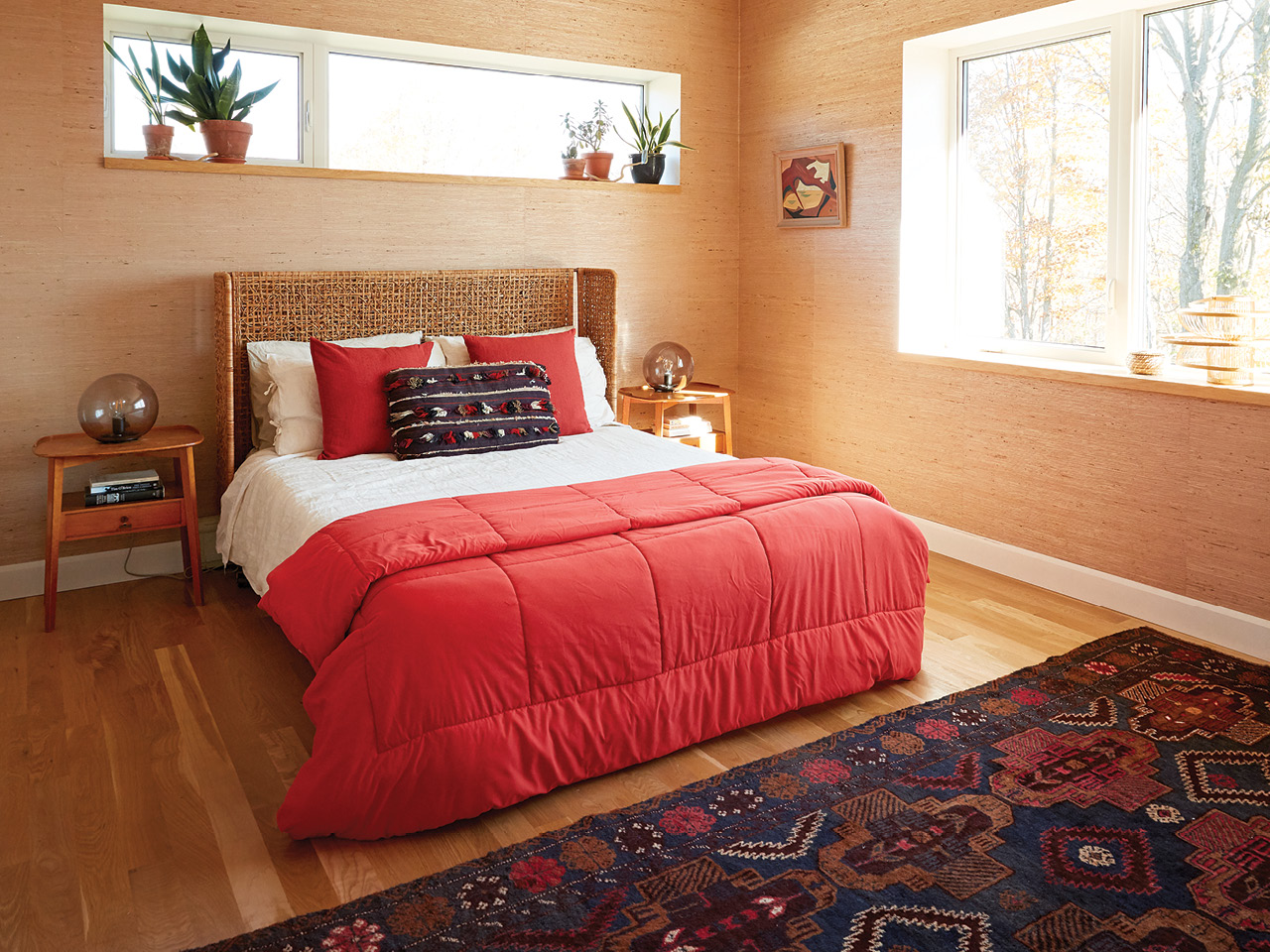 But enough about how it all works. One of the most refreshing aspects of the Hoekstras’ house is the fact that it looks absolutely gorgeous. Other than the solar panels outside, the only clues that it’s a green build are the lack of forced-air vents (a result of having no furnace) and the deep windowpanes (to accommodate the extra insulation).

It helps that most of the finishes—quartz kitchen countertops, white subway tile, white oak ceilings—look sleek and contemporary. “A lot of the building materials came from Home Depot,” says Luke, an electrical engineer who did much of the construction himself. “We bought the windows, which are triple-pane and filled with argon gas [an insulator], for $25,000 from a Canadian company called Kohltech. The insulation is a mix of Styrofoam panels and fibreglass.” 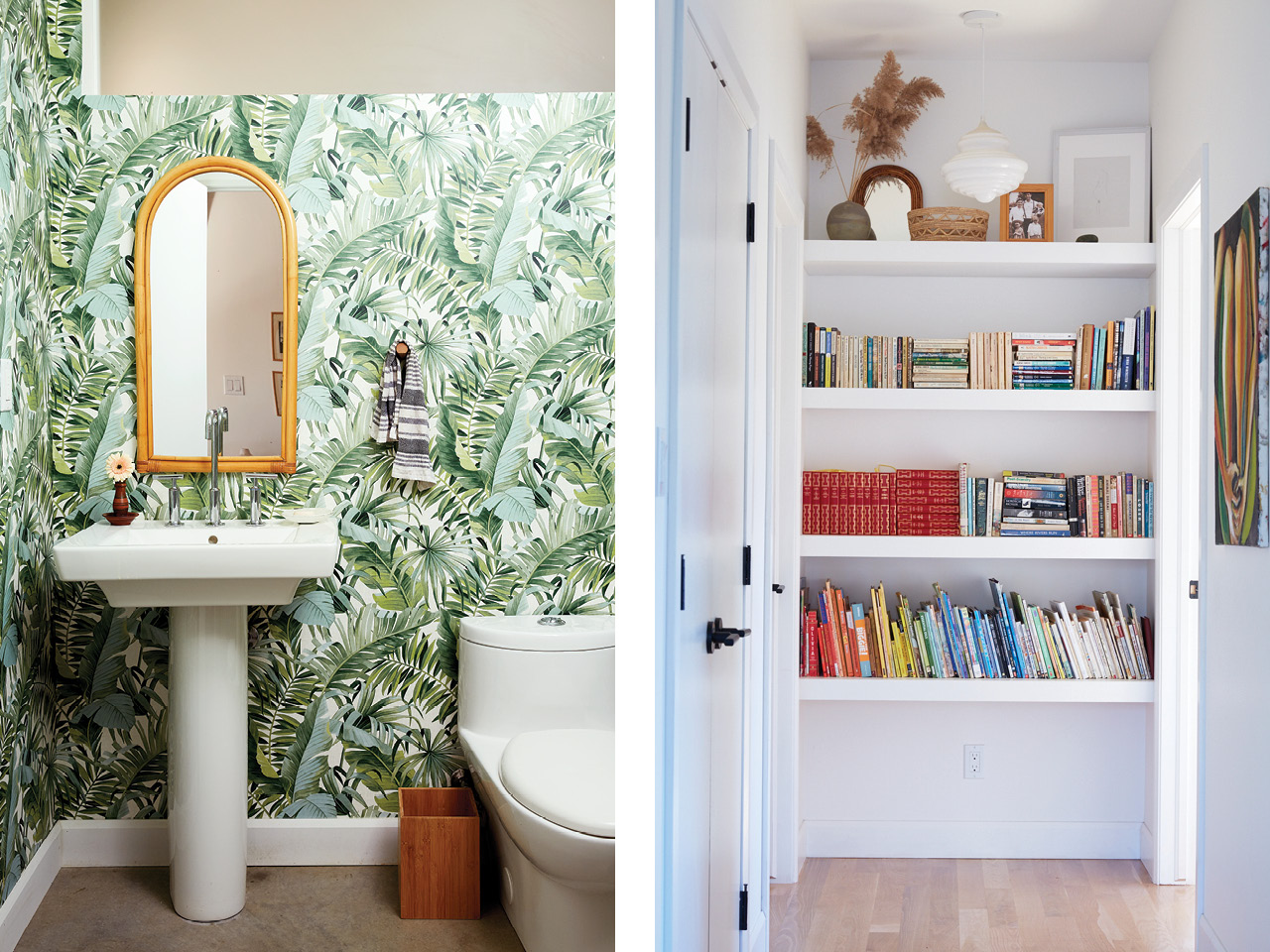 The main-floor powder room has a high interior window that lets in lots of light. (Photos, Erik Putz.)

At just 1,600 square feet and with no basement (digging into the bedrock of the surrounding Niagara Escarpment would have been too difficult), the home isn’t big—making it work was a challenge for a family of two adults, three kids and a dog. But the Hoekstras made everything fit by using every square inch (including a two-car garage) and carefully selecting mostly second-hand, small mid-century modern furniture sourced from online auction sites like eBay.

Though Luke, who works from home a few days a week, was originally supposed to have his own office next to the open-concept living area, they ultimately decided against it. “Having a big room just for me was a waste,” he says. Instead, they tucked a small desk and chair into what would have been the office’s storage closet and filled the rest of the room with musical instruments. 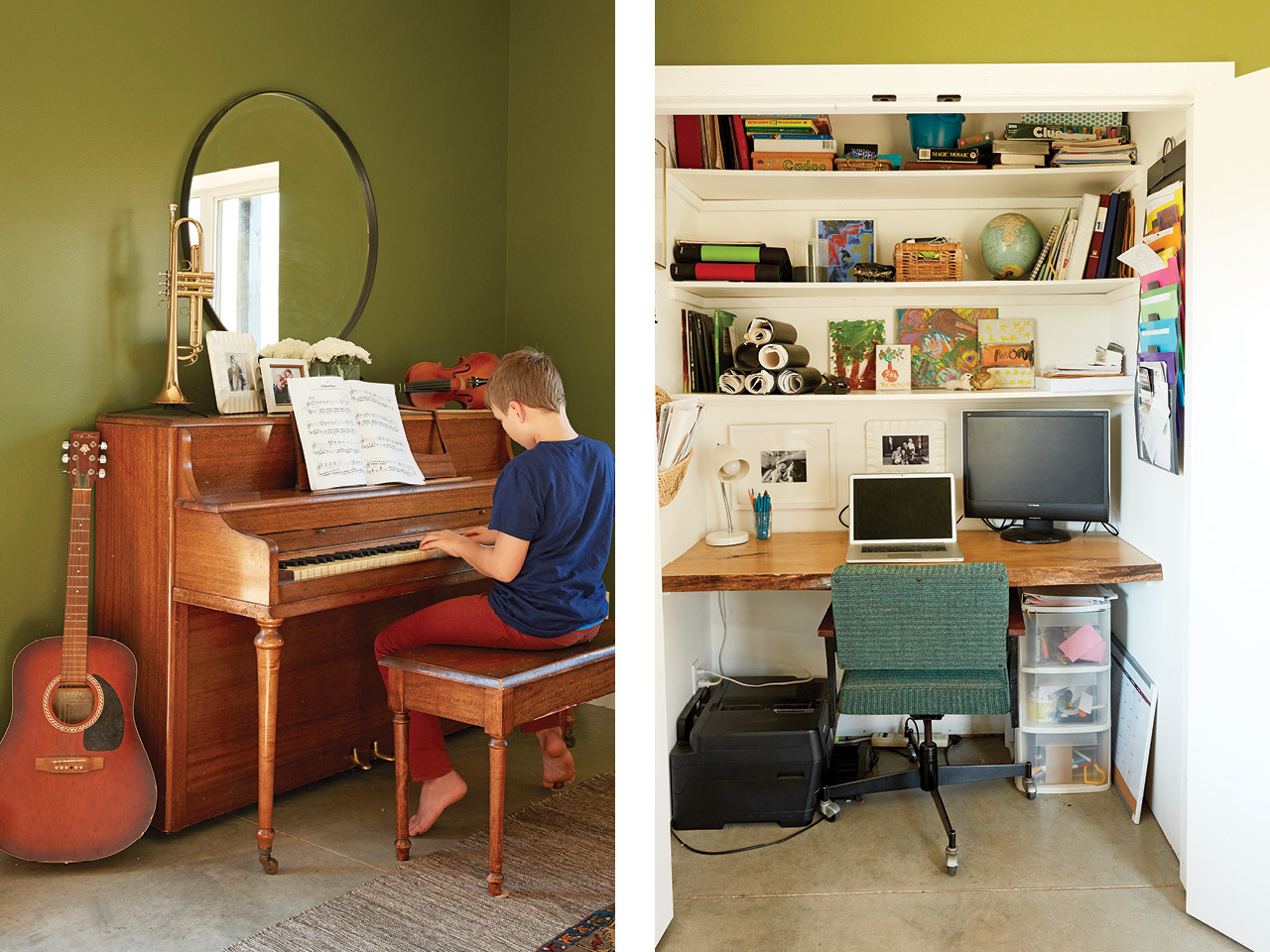 What was originally intended to be Luke’s office became a music room for the kids. Luke’s “office” is located in the music room’s closet. (Photos, Erik Putz.)

The second storey of the house has a master bedroom, two kids’ rooms (the boys share), a master bathroom and a laundry room. Jennie, a web designer who works from home, created her own makeshift office by squeezing a small desk beside the washer and dryer in the laundry room. “It’s beside a window looking south,” she says. “It’s bright and peaceful. What more do I need?”