A new generation of fibre artists is reclaiming the medium with a bold and cheeky approach.

Crystal Ross makes magic while making do. Based in Dartmouth, N.S., the artist behind the line Crystal Rugs transforms hand-dyed wool into art during motherhood’s stolen moments. “I love how portable this craft can be,” she says, prepping for a weekend in the woods with her family, rug frame and hooks in tow. Perhaps she’ll take the hook her grandfather—who, alongside her grandmother, was an artisan rug hooker in the Acadian village of Chéticamp, Cape Breton, in the 1960s—made her, a tool so small it almost gets lost among Ross’ tangle of fingers. “It’s not child-sized,” she laughs. “That’s just the size they worked with because their wool yarn was so fine.” 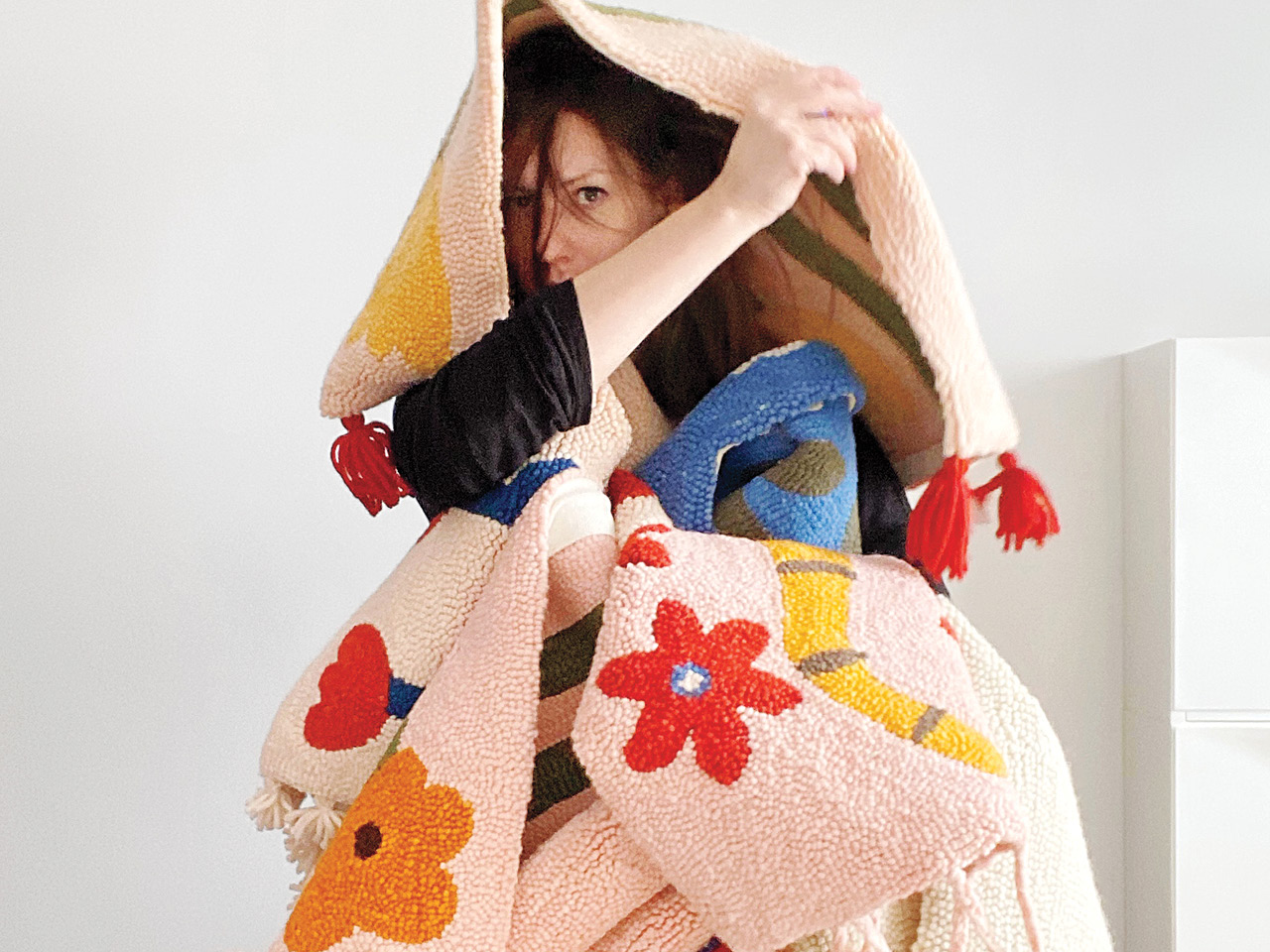 “Making things is really special,” says Crystal Ross, a rug hooker from Dartmouth, N.S., who is known for her playful fibre art. “It humanizes our world.”

Four hundred kilometres and several decades away from Chéticamp and its internationally renowned rug hooking cottage industry, Ross is part of a vanguard of fibre artists reimagining the medium. While the historic rugs of Chéticamp are known for their high realism, which Ross says is “almost like look[ing] at photograph[s],” (think floral designs, art deco motifs and portraits in lifelike colours), Ross and her peers favour graphic designs rendered in pastels and hyper-saturated hues. She describes her own work—which includes pompom-edged rugs depicting cartoony flowers and animals—as “chunky and clunky and fun and silly.”

Like Ross, the majority of Nova Scotia’s new generation of rug hookers studied fine art, a departure from Chéticamp’s working-class roots. These young women are reclaiming a medium some have feared is dying out, manifesting a new visual era ranging from Dartmouth fibre artist Hanna Eidson’s cheeky candy-coloured slogan rugs to the vivid functional art made by Halifax-based multidisciplinary artist Victoria Brumwell of Little Brummie. 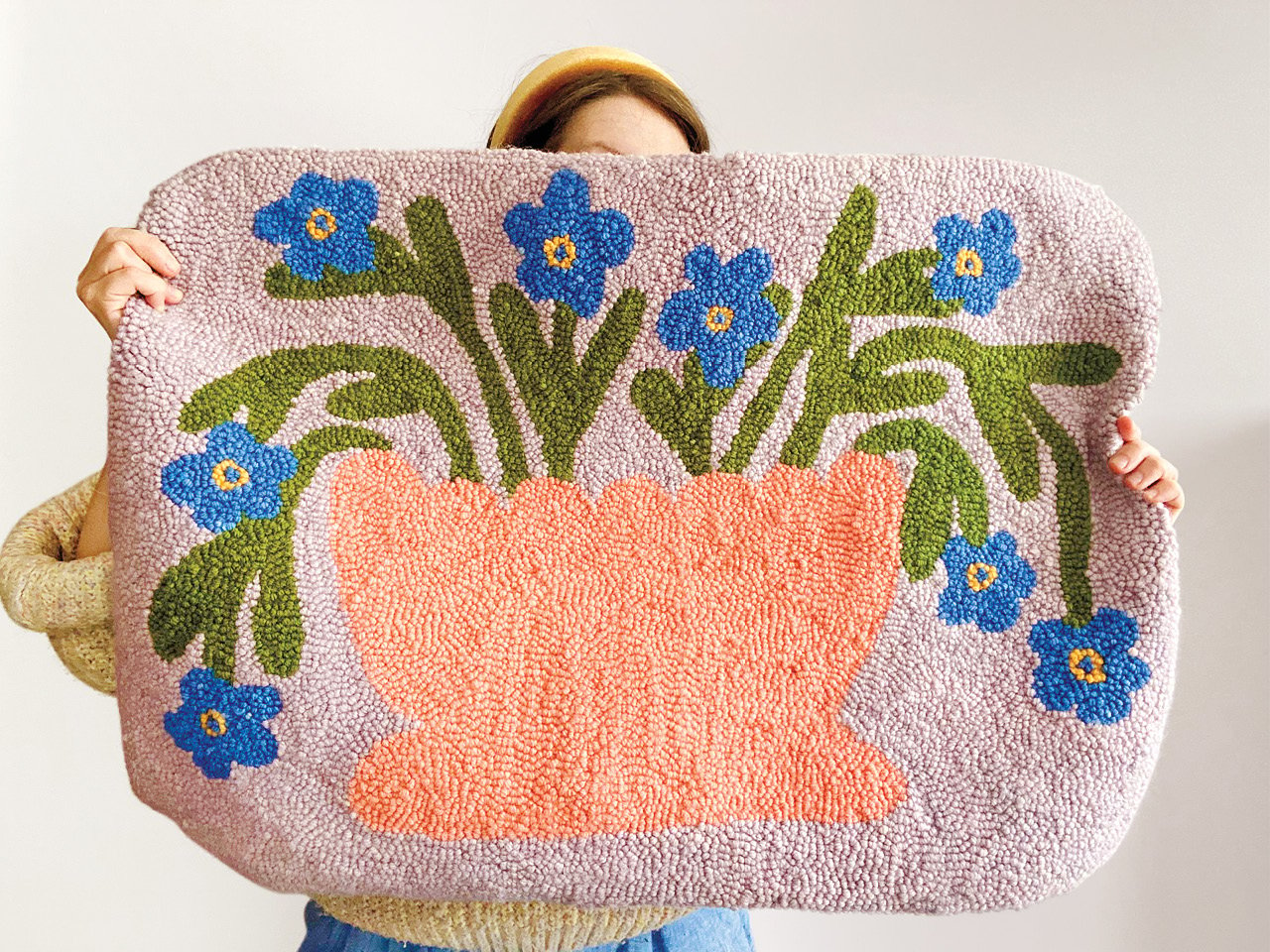 “Perfection seems so cold to me now,” says Ross. “I want to be able to tell if something is made by a human. I want to celebrate it—and rug hooking offers that.”

Laura Sanchini, curator of craft, design and popular culture at the Canadian Museum of History, has traced the region’s nearly 100-year-long rug hooking history from local pastime to thriving cottage industry. “It’s tied to women’s history,” she explains, noting that most rug hookers in 1960s Chéticamp were women. At the time, rug hooking wasn’t taken seriously as an art form, a perception that also plagued other women-led mediums, including embroidery. When works from the area started gaining attention from Manhattan art lovers, prices—and esteem—quickly skyrocketed, with people making the trek to Cape Breton to get their hands on the coveted rugs. Today, a rug hooked with the help of Ross’ grandparents sits in Rideau Hall, the official residence of the Governor General of Canada in Ottawa. “It’s a symbol of resilience,” adds Sanchini.

For interdisciplinary artist Letitia Fraser, whose oil paint portraits of the African Nova Scotian community are part of the Art Gallery of Nova Scotia’s permanent collection, rug hooking is a new but natural extension of her practice. When the Halifax artist visited a Cape Breton rug hooking museum last year, she instantly felt at home. “I’d never even heard of rug hooking before, but it felt really comfortable,” says Fraser. “The story 0f how Acadians made rug hooking felt very similar to the African Nova Scotia experience.” She sees parallels with the African Nova Scotian quilting tradition—another women-led art form—in which scrap fabrics (sometimes even potato sacks) were repurposed into something practical and beautiful: “Using whatever they had available to them out of necessity and then being creative on top of that? It’s something beautiful that women can come together and express themselves.” 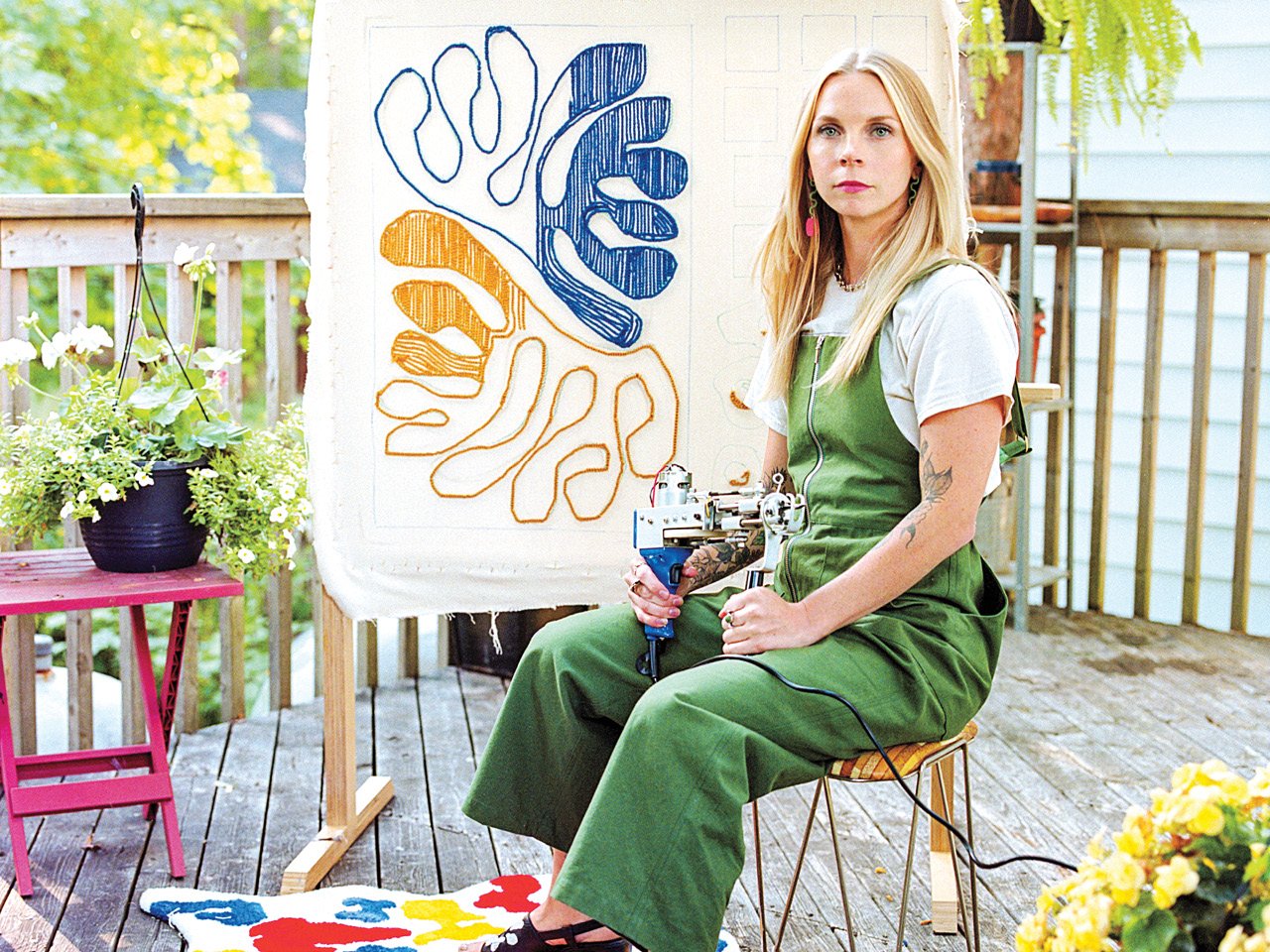 “The medium has so much creative potential,” says multidisciplinary artist Brumwell (seen here with her rug frame). “The intersection of aesthetic, concept and functionality appeals to me—usefulness does not prevent something from being art.”

That rug hooking allows for such self-expression is also the appeal for Antoinette Karuna, a visual artist and filmmaker based in Antigonish, N.S., who recently turned to fibre art. “Coming from the film industry, rug hooking has been a nice place to land,” she says. Rather than trying to navigate an industry that’s known for being white and sexist, Karuna can focus on what matters most. “It’s just me and the work,” she says. Among other themes, her rugs explore the nuances of her Tamil Sri Lankan and French Canadian biracial identity. “Each rug is a film frame,” says Karuna. “They fit together to tell a story.”

The storytelling Karuna describes caused friction for decades in Chéticamp, as traditional designs gave way to individuals creating their own patterns inspired by everything from biblical scenes to the simple routines of daily life. It’s this departure that made way for Karuna’s abstract self-portraiture, the playful spirit of both Ross and Eidson’s work, and the explorations of form favoured by Brumwell. 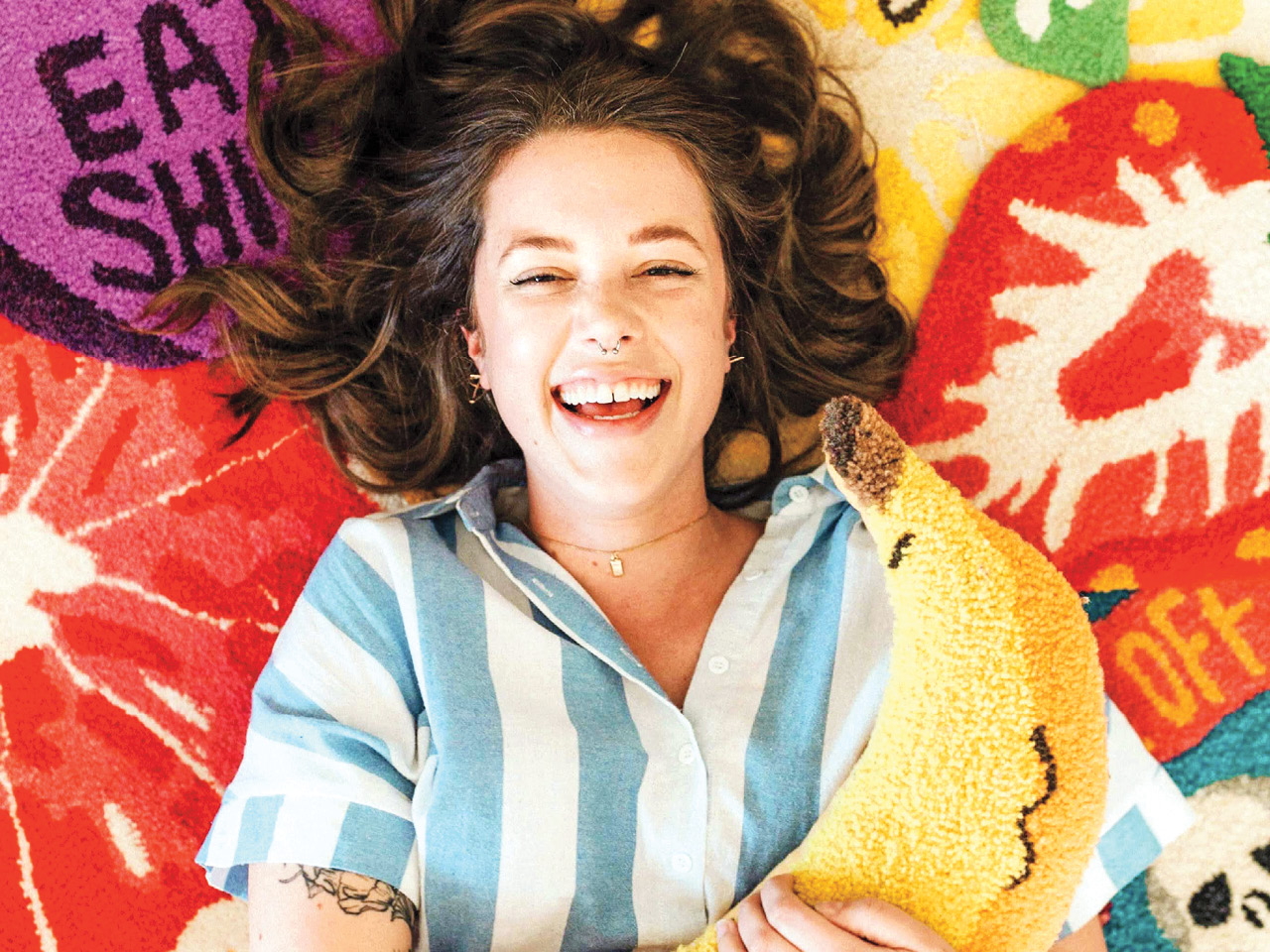 Deanne Fitzpatrick, a rug hooker and instructor based in Amherst, N.S., picked up the hook where Chéticamp’s early trailblazers left off, creating a unique visual style of storybook-like scenes. Widely credited as the creator of the “popcorn technique”—a hallmark of Nova Scotian hooking style, where wool strips of various sizes are used to give rugs texture—Fitzpatrick is currently the subject of a solo exhibit at the Art Gallery of Nova Scotia. She thinks the future of rug hooking is about breaking convention: “I see this new generation being experimental and inventive—and I love it.”

Fibre artist Eidson, who comes from a long line of makers, is living up to Fitzpatrick’s vision with her innovative designs. She loves being part of the “exclusive club” of a women-led craft and is fascinated by how art mirrors the realities of womanhood. “For a long time, there was a very specific set of rules female artists were expected to follow, especially in fibre art, where you often follow patterns,” she says. Her own rugs, which she creates under the name H.H. Hooks, typically begin with freehand drawings, a key part of her free-spirited aesthetic. 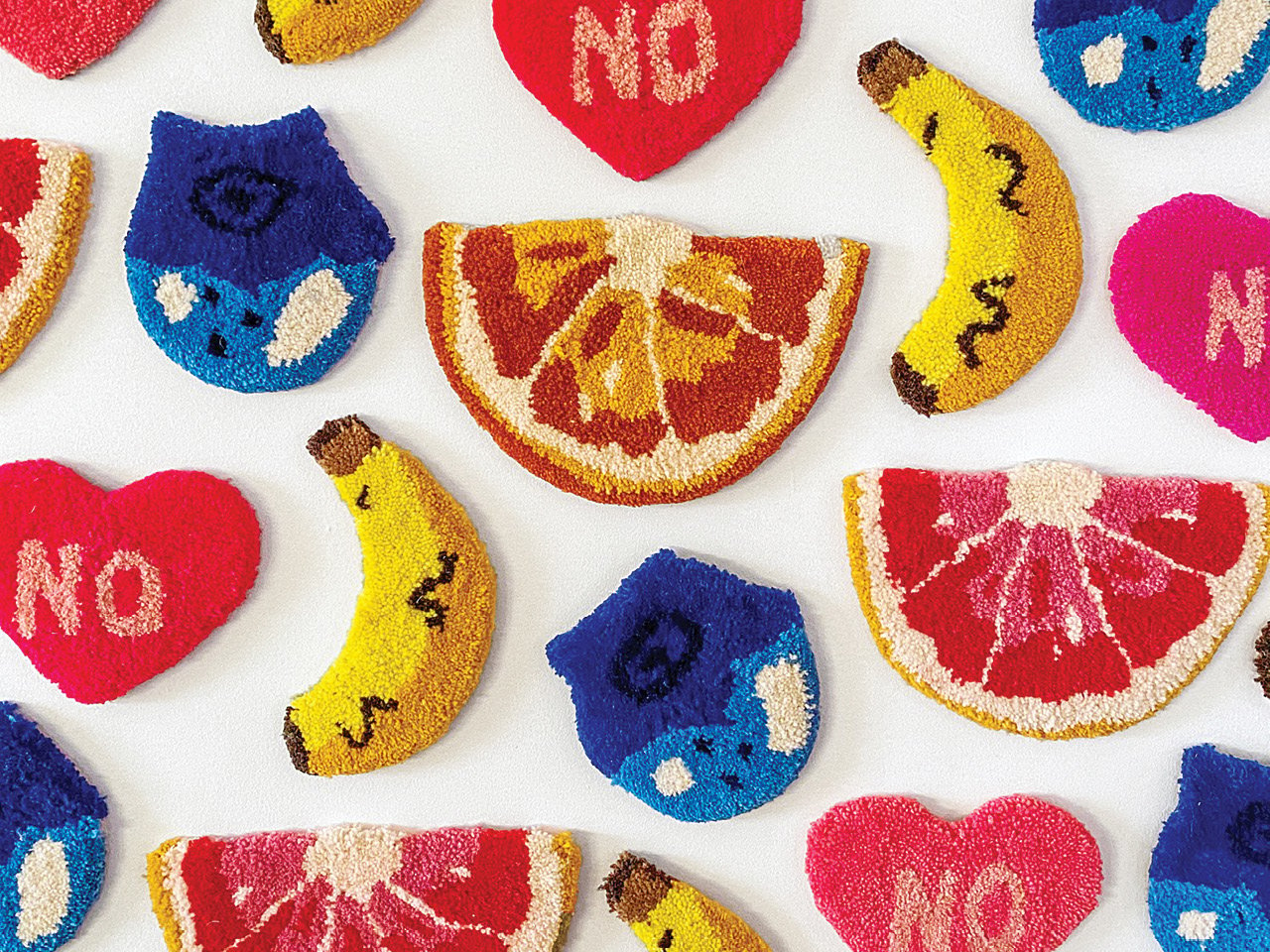 “I deliberately make really colourful, happy things at a time in the world when everything is pretty f-cked up,” says Eidson.

Eidson was hooked on the medium from her very first class. “I just started drawing the sorts of designs I wanted to see,” she says. She immediately gravitated toward a minimalist but vivid style inspired by pop culture. “I’d never seen a rug that looked like that.”

This pared-down aesthetic that bursts with colours is a calling card of this new generation of fibre artists. “My work derives from nature, a simplified, abstracted organic form,” says Brumwell of her tufted creations, which evolved from her interest in textiles. “Most of my inspiration comes from fine art: German expressionism, abstract artists and 19th-century painters like Matisse.” 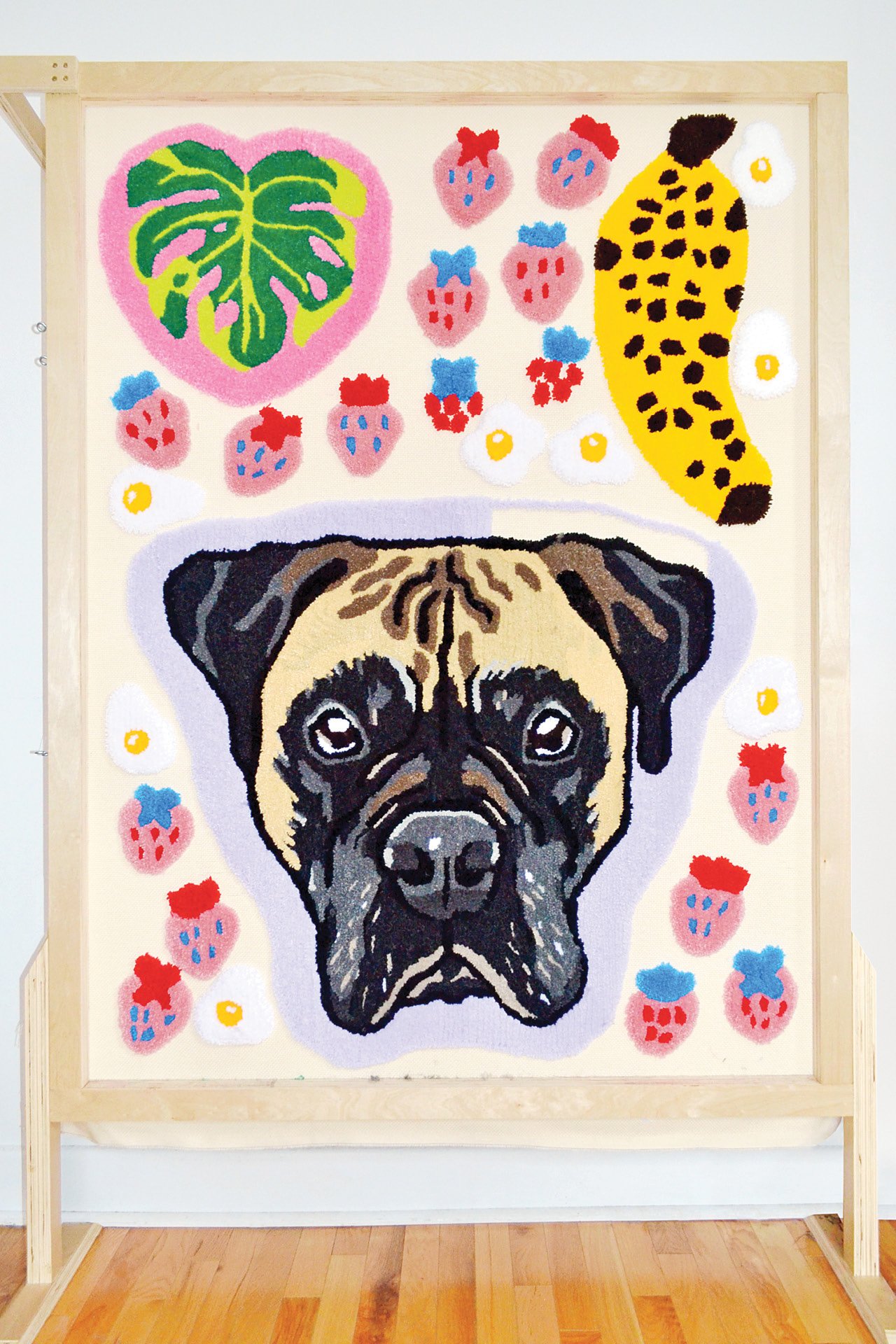 Victoria Brumwell swapped painting for rug hooking. “I wanted to make something that could have more function, and would be in people’s homes and have daily use.”

And while Brumwell’s work looks worlds away from a classical Chéticamp rug, its roots are not: “My work carries on the tradition of not sacrificing aesthetic for practicality, but combining the two,” she adds. “I would like to think that the amount of time and effort I put into the design and creation of my tufted work is an ode to the women who came before me who put that same—and much more—amount of skill and love into their work, but were not given any credit or status as artists.”