How I Started A Pandemic Balcony Garden

I was never a gardener, but trying to grow herbs and vegetables has helped me get through lockdown. 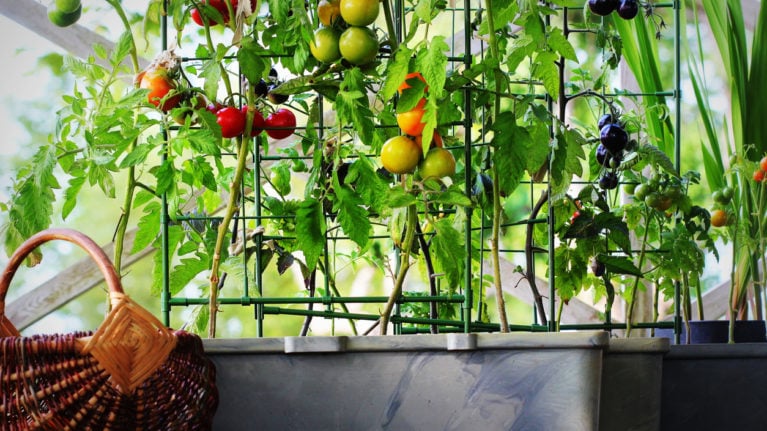 I’ve owned, and overwatered, houseplants for years, purchasing replacements every few weeks as a self-care treat. But when the COVID-19 pandemic hit, and my world contracted into my one-bedroom apartment, a series of screens, my collection of plants took on a new importance.

I began planting whatever I could find, from dollar store packets of bean seeds to kitchen scraps, pruned and stuck into the potting soil leftover from plants of the past. While friends on social media were baking, sewing masks and doing exercise classes on Zoom, what was getting me up in the morning was the possibility that a new seedling might’ve poked its way through the soil. Turning my 7th-floor concrete balcony into an oasis of climbing pea shoots, sprouting tomatoes and tangled beans became my at-home project, but also, a necessary means of distraction.

The mental health benefits associated with gardening are not new. Studies have linked gardening with a reduction in depression and anxiety and improving one’s overall quality of life. Planting bundles of spinach and lemon seeds left over from one of my numerous quarantine meals didn’t eradicate my worries, but it occupied a portion of my thoughts—thoughts that were otherwise consumed by the news, concerns about my family’s wellbeing and uncertainty about the future.

“There’s something nourishing about having a relationship with land and food because it’s something that you’ll eat every day, it’s almost like a meditative process,” says food and community justice advocate Cheyenne Sundance, founder of Sundance Harvest, an urban farm in Toronto focused on food justice and sovereignty— issues that have become even more pressing with COVID-19’s strain on the food system and its disproportionate impact on marginalized communities.

Throughout history, Canadians have turned to gardening in times of uncertainty. During the First and Second World War, people were encouraged to plant “victory gardens” filled with homegrown produce to help people better sustain themselves and relieve pressure on the food supply chain. So it’s no surprise that during the pandemic, and amid widespread shortages of foods like flour, eggs and canned beans, Canadians began panic-buying seeds and social media photos of egg cartons turned into seed trays and newly planted vegetable patches became frequent.

As we head into a summer that requires more time at home than in the past, here are some ways to set up your own balcony garden, with tips from the experts:

When growing plants on a balcony, it’s important to think about two things. The first is wind. “If you’re on the 10th floor as opposed to the second floor, you’re going to get much more wind. Wind will affect what you can grow and what you can’t grow,” says Sundance. In general, she suggests balcony gardeners avoid vining plants and tender crops such as leaf lettuce, pole beans and cucumber and stick instead to heartier options like bush tomatoes and head lettuce.

The second factor is how much sunlight your space gets throughout the day. “If your balcony doesn’t have a tree next to it or a neighbouring building, you may get excessive sunlight, especially if you’re south-facing or west-facing,” says Sundance. My balcony faces west, and gets blasted with direct sunlight from around 2pm to 7pm. For situations like this, Sundance recommends planting heat-tolerant crops like okra, bush beans, rosemary, thyme and lavender.

What you need to get started

In her 15 years planting vegetables on her Toronto roof, gardening expert Gayla Trail has used everything from old containers to garbage bins as planters. “Anything can be a pot; the trick is you have to have drainage,” she says. (I’ve drilled holes in a few yogurt containers to use them as small pots).

Trail describes herself as “very frugal,” but there is one thing she won’t skimp on: potting soil. “When you’re growing in a container, that’s where all the nutrition comes from,” says Trail, author of Grow Great Grub: Organic Food from Small Spaces.

And since balcony gardens rely on the soil nutrients packed into your yogurt pots and planters, Sundance adds that it’s also important to get liquid fertilizers specific to the plants being grown and fertilizing every two to three weeks. For fruiting plants, she recommends a phosphorus fertilizer, and for leafy greens a nitrogen-rich option like fish emulsion.

A common mistake with first-time gardeners is over-planting. Sundance says a lot of growers will put several plants in one pot because aesthetically, it looks nice and full. But with time, the plants will grow too close to each other, competing for the same resources and won’t fruit. (I am definitely guilty of doing this. At the beginning of the pandemic, I put nearly an entire pack of tomato seeds in a pot previously used for a single succulent and let them battle it out.)

As a general rule, Sundance recommends putting only one fruiting plant in each 8 to 12 inch-deep pot. “The bigger the pot, the more water and the more fertilized your plants can be because that soil will be in higher volume,” she says. Giving seedlings the space and the nutrition they need will lead to healthier and more productive plants—which, frankly, also feels like a metaphor for the importance of nurturing ourselves.

While quarantine gardening may be popular now, the ability to grow food in a way that isn’t restricted by a lack of access to green space, city bylaws or current COVID-19 regulations is a privilege that is not afforded to all. Even the victory gardens planted were historically meant to be accessible to all Canadians, but ended up being most common among well-off urban homeowners.

There’s a difference between people growing food as a hobby, versus those growing it because they don’t have access to fresh produce, notes Sundance, whose urban farm is rooted in addressing systemic racism in food systems. Roughly 4 million Canadians faced food insecurity before the pandemic, a disproportionate number of whom are Black, Indigenous or people of colour. With unemployment rising, those numbers are expected to increase.

While planting a few tomatoes and a bed of beans was my response to the lineups and lack of produce at grocery stores, my balcony harvest will not replace my need to purchase food. Instead, experimenting with plants has brought me a source of calm, but is also fuelled by a realization that I didn’t understand where my food came from. As Sundance suggests, it has given me much-needed appreciation of the farmers and migrant labourers I relied on.

My balcony garden has become a constant reminder there is always potential for growth.

“The gift about gardening is it keeps giving,” says Sundance. “Your crops can be very plentiful and bountiful and there’s something beautiful about sharing your harvest. Try and share what you can, grow what you like and take it slow.”